The Futility of Market Timing (Plus Another Income Alternative)

Following up on last week's quick MAPsignals Big Money Index (BMI) update, we said we wanted to see more data. Well, the data surprised to the upside in a huge way.

Stocks are being purchased at breakneck speeds again, while selling has essentially fallen off the table (see the Buy and Sell Signals above). With the BMI beginning to ramp up (285 buys versus 68 sells), you can see in the chart below that we've already hit a hard bottom and there’s been a significant rebound in the BMI since: 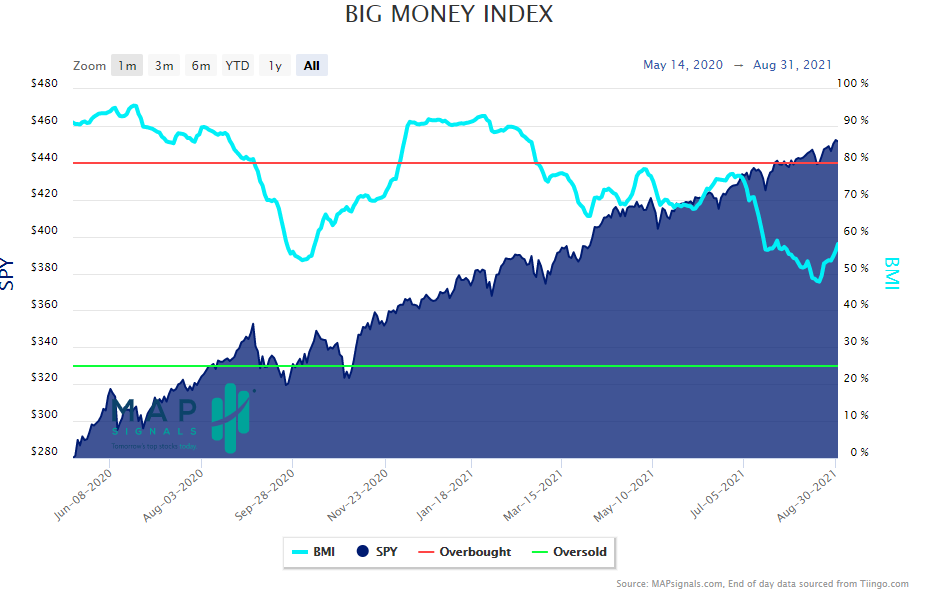 This huge uptick isn’t just from increased buying, though the buying power is clear. This BMI increase is also being powered by a dearth of selling. When buyers vastly outweigh sellers, markets can rise quickly.

For us, one of the biggest takeaways from this dramatic reversal is that even though we started to point out signs of this a week ago, it happened quicker and historically earlier than usual. This is further proof that timing markets should not be an investor’s pursuit.

The data changed so fast over one week. Investors trying to time the market were likely unable to act quick enough to “sell at the top” and “buy at the bottom.”

For some reason, it seems the investment industry is fascinated with market timing. But selling high and buying low every time is a fantasy. In truth, market timing is an energy-sucking pursuit of impossible perfection. It’s futile.

One example we found while researching this post is related to the upcoming 20TH anniversary of the September 11, 2001, attacks. On July 24th, 2001, Silverstein Properties purchased a 99-year lease on the World Trade Center for $3.2 billion. We all know what happened less than two months later.

Please understand this example is not meant to downplay in any way the tragedy of what occurred, and the deep losses suffered by many – and I’m not referring to monetary losses. It simply shows how quickly things can change.

Similarly, there’s been a rapid, massive, and thankfully much more positive change in the recent underlying market data. We think much of the swing can be attributed to Federal Reserve Chairman Jerome Powell's speech from Jackson Hole, Wyoming, which reiterated support for continued low interest rates, at least for the next couple years.

So, despite how just a couple weeks ago the data foretold a story of lower prices due to a seasonally weak August, lower liquidity, waning buying, and increased selling, markets have since reversed course quickly, as the BMI bottomed out on Friday, August 21. We also mentioned getting through July and August for an expected September ramp up; however, it appears the upswing began early.

What’s exciting us from a micro level is what stocks are being bought. Many of the most pained, beaten down areas from the past few months are starting to see life:

Small caps especially are reviving, as the Russell 2000 Index is up 7.3% since August 19. Technology is also on the rebound. The only real selling we’re seeing is in like defensive sectors like staples.

Additionally, on the very right sides of the two charts below, you can see significant increases in buying in the light blue as well as significant drops in selling in the red in both stocks and exchange traded funds (ETFs). These are all bullish signals, especially for growth companies. 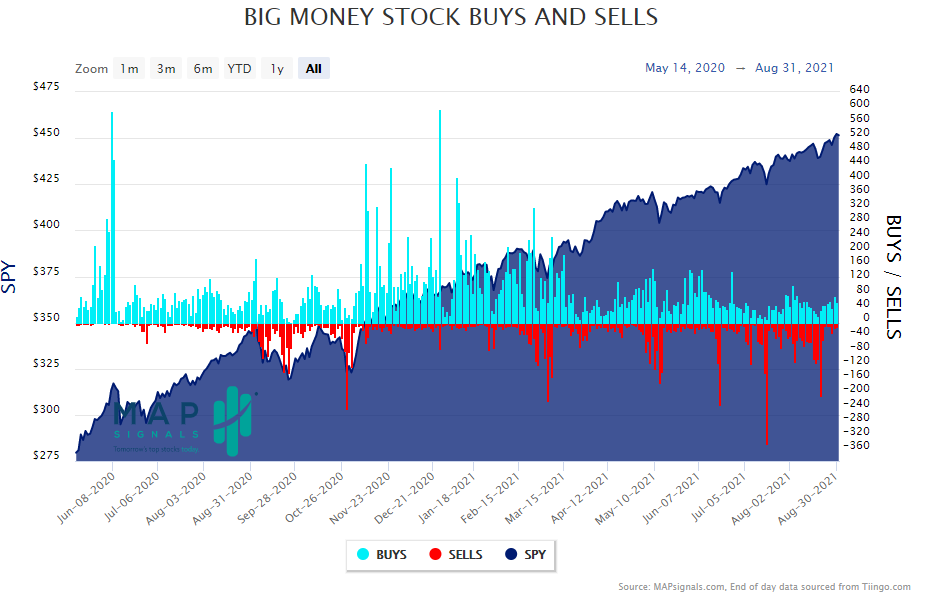 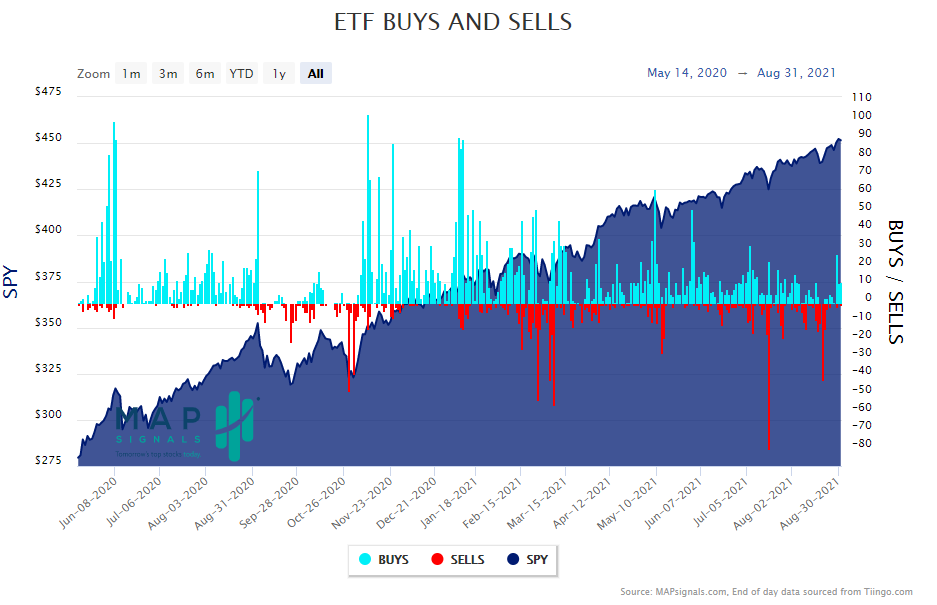 As we've seen this year, markets are irritable. Rotations have been frequent. What's up one month is down the next. This is why we have pounded the table this year to favor a barbell approach in terms of asset allocation that includes both growth and value sectors.

Our strategy ignores short-term market timing – a fool’s errand if there ever was one – in favor of a long-term, goals-based approach that measures in years and decades, rather than days, weeks, and months. Since our time horizon is long and we have a sound asset allocation, the timing of this sooner-than-expected market jump doesn't really matter.

Our takeaway is this: great investors typically have one thing in common – the long view.

We’ve posted a few times about income investing in a low interest rate environment as inflation ticks up, mentioning real estate, “green” utilities, dividend stocks, and others. We believe it’s timely to bring up another option, given Chairman Powell saying the central bank would continue to hold the target range for the Federal Funds Rate at its current level for the foreseeable future. Keep in mind, this is despite inflation running higher than the stated 2% target.

It’s simple – if the Fed is not going to regard inflation as a real long-term threat and continues to keep downward pressure on yields, income investors need alternatives. One could be business development corporations (BDCs). In a recovering economy with low interest rates, BDCs can be effective in absorbing higher inflation and taxes while still providing a meaningful return yield.

BDCs lend money to small- and medium-sized private businesses that need access to capital right away. They lend at typically higher loan rates (from 8-15%) than other lending institutions. And since BDCs are structured like Real Estate Investment Trusts (REITs), they must pay out at least 90% of all funds from operations in the form of dividends.

In our opinion, this structure, combined with the fact that most of their loans have a variable rate, which eliminates rising interest rate risk, provides a good inflation and interest rate investment hedge. Typically, we see yields on BDCs range from 6-14%. That means due diligence is essential – seek high quality because not all BDCs are created equal.

From a fundamental standpoint, we expect the economy to grow 5% or more and think it will be reflected in the private sector’s robust sales and earnings. BDCs will be able to borrow at less than 2% or float stocks to make loans to provide for these outsized dividend yields at a time when inflation, transitory or not, is real now.

There are around 45 publicly listed BDCs for investors to choose from. Like any investment, some are good quality, while others are bad. But if due diligence is done appropriately, BDCs can provide inflation-hedged income opportunities.

The top holdings for the S&P BDC index account for roughly 75% of the total composition of the index. This further indicates the importance of proper due diligence in the BDC marketplace.

There are few, if any, other sectors that offer this kind of income stream that fight the forces of inflation while remaining fully invested in U.S. companies. Therefore, we believe this is an attractive sector, along with the others we’ve mentioned, to help investors generate income.

Finally, as summer winds down and we approach the final stretches of 2021, we want to wish a happy and relaxing Labor Day to everyone!