Our readers know how the “big money” has been acting over the past few weeks. Using one of our favorite data points – MAPSignals’ Big Money Index (BMI) – we can see a comprehensive view of institutional investor activity, and the downward trend is clear: 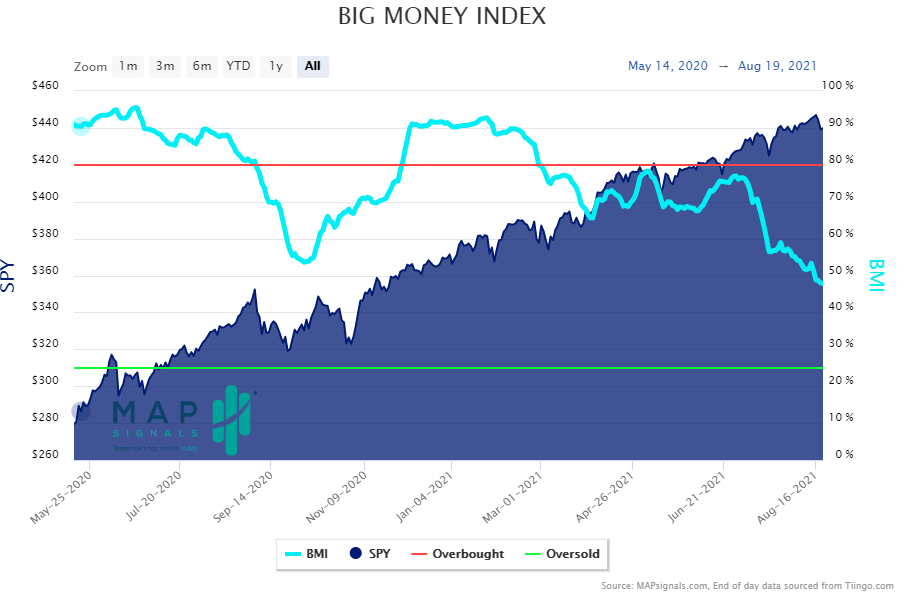 Today’s update is particularly significant because the BMI dipped below 50% in the past week, which means more than half of all “big money” signals in the past five weeks have been sells. This is obviously counterintuitive to indices recently hitting all time highs (although the major indices are about 2-3% off those highs now).

Still, it isn’t like we’re seeing gains every day. We had a big selloff day last Wednesday. Those sorts of days, especially if they occur in succession, could finally be real signs of a near-term pullback.

Additionally, in the MAPSignals’ chart below you can see significant selling pressure recently in ETF’s which is another short term bearish signal: 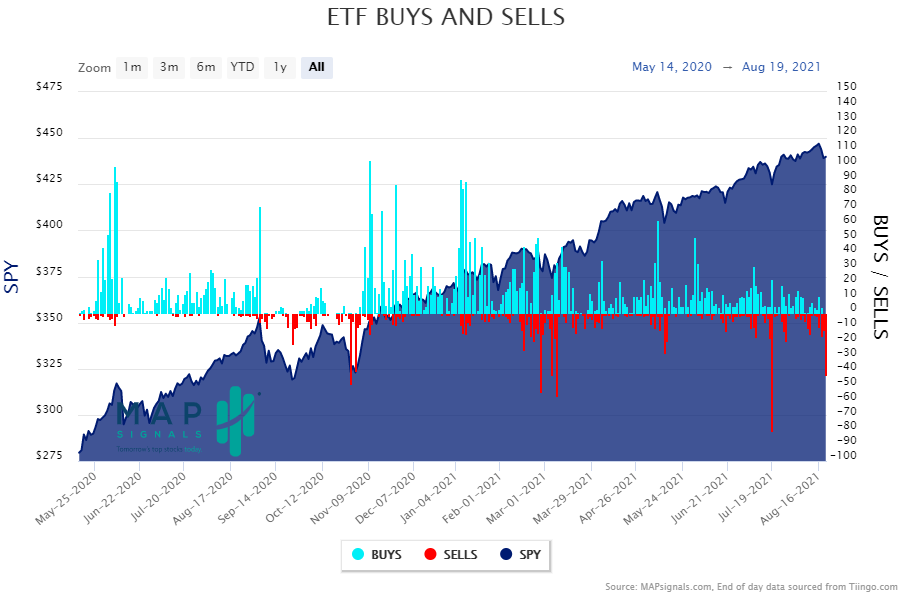 As you can see in MAPSignals’ overall sector rankings, there are significantly more sells than buys from a scoring perspective:

Over the last couple weeks, we've been trying to analyze why the main indices seem to be happily chugging along (outside of days like last Wednesday), despite a falling BMI. But the truth is, while equities have ascended, the ride has been bumpy with no shortage of volatility.

In digging deeper, we've noticed major index gains while the small-cap-laden Russell 2000 has struggled almost all year, and even more so recently as it tests the long term 200 day moving average trendline.   Difficulties in the Russell 2000 are often a leading indication of more difficulties further up the “market cap chain.” When we see this type of action, three possibilities exist:

We now have enough data to show much of the market has been drying up for a few weeks now. Thus, we’re experiencing the third scenario, where both buying is slowing, and selling is increasing.

But to answer why the major indices aren't having the same struggles as small caps – it’s because the larger markets are being propped up by just a few big, quality stocks, which are doing the heavy lifting. These are household names like Apple, Microsoft, Google, Facebook, Costco, Nike, and so on. Those companies have accounted for most of the market gains since April.

Meanwhile, the negatively affected stocks are some of the most well-known growth names of the past year and a half. Some are even in the highly popular semiconductor subsector. Therefore, it's clear large investors have been selling growth stocks in favor of large cap tech picks and potential infrastructure deal beneficiaries.

These type of data continue to forecast what we’ve been saying for weeks – there is a possible correction coming, especially in the more volatile later months of summer. If that happens though, the engine that drives the next bull market could likely be those same growth names that are getting beaten up under the surface now. It reinforces our thesis that it’s best to ride out these kinds of storms using long-term goals as guideposts.

Lastly, we’d like to offer a counterpoint to the recent negative narrative around stocks. That is, with interest rates still low, stocks, especially U.S. large cap equities, are still the best place to be. Remember, if we look at the dividend yield on the S&P 500 compared to bonds, the S&P 500 dividend yield destroys a 10-year bond on an after-tax basis by 29%:

Welcome to the Metaverse

Over the past five years or so, we’ve written about the importance of the 5G evolution. Today we're going to touch on 5G again and an additional application that is being talked about more in the news media.

Keep in mind how winning 5G has become so important for U.S. telecom firms (e.g., AT&T, Verizon, etc.), that a record $81 billion was spent just on airwave license auctions, which was almost four times the estimated spend. But if we look at the past, these same mobile carriers and telecom firms poured billions of dollars into 4G networks, only to see technology giants like Apple, Facebook, and Google, walk away with most of the social-media-fueled profits.

Now, the telecom companies are trying to learn from that mistake. They've realized they need more revenue streams than simply selling data to customers or creating toll roads within their respective infrastructures.

One potential option that has been getting more publicity is the metaverse. You may be asking, “The what-a-verse?” Metaverse is a buzzy term to describe virtual shared spaces where users are present (the most common current applications you might know are augmented reality (AR) or virtual reality (VR)).

But now things are progressing beyond what was capable even mere months ago (as we knew would happen). Advanced versions of the metaverse, while still years away, could include multiple technologies like holograms to bring the internet to life, making it more immersive. For instance, think of humanlike 3D avatars working, interacting, and relaxing in digital replicas of offices, factories, and leisure spaces.

With these applications in mind, global telecom companies have begun to roll out programs to recoup infrastructure and licensing costs. An example is SK Telecom, a leading South Korean carrier. It launched a metaverse platform that allows users to socialize in different virtual environments via avatars. Here in the U.S., Verizon partnered with the NFL to develop virtual Super Bowl experiences like watching 3D replays in 360 degrees.

Research by Ericsson AB says operators like Verizon and SK Telecom could earn revenue potentially reaching $712 billion by 2030 if they introduced these innovative 5G applications in addition to “just laying lane pipe infrastructure” (no small feat itself).

The argument is that if the telecoms do nothing, they’ll eventually reach and remain in a flat revenue curve, just like they did with 4G. Revenue growth eventually flatlined with 4G because the telecom carriers did not build platforms to leverage the infrastructure they built: 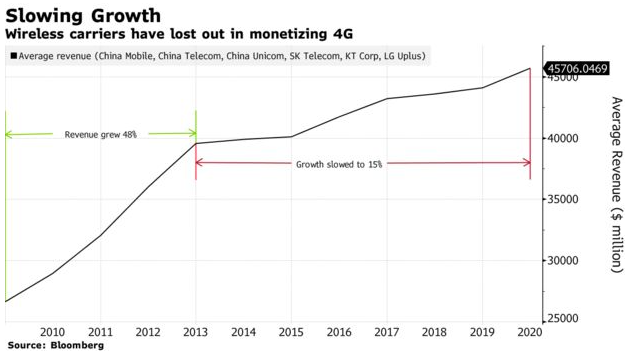 So, the question then becomes, can these telecoms win? In the 4G race, tech companies basically captured the revenue. And let's not forget that every type of tech company of note is dabbling in the metaverse now. An example is that well known little company Facebook. Recently, Mark Zuckerberg claimed to investors that the social network will be known as a metaverse company in the future.

Keep in mind the other “smaller players” like the gaming engine Unity, “Fortnite” maker Epic Games, the newly publicly traded Roblox, and more. These sorts of firms are all constructing products and services for metaverse use.

These 5G applications within the Internet of Things are just a few examples of potential businesses we could not have fathomed a few years ago. More are evolving and coming out every day, these are just the latest to gain seemingly legitimate traction.

With so many players in the game, it will be interesting to see how this unfolds over the next 10 years. There will undoubtedly be opportunities for investors.

But who will capture large portions of 5G’s estimated $13.1 trillion of global economic output (per Qualcomm’s independent study with Accenture)? Time will tell.