In 2020, digital networks have been our lifelines. We’ve used them for commerce, communicating with loved ones, and so much more in our daily lives.

Our memories are short though. We forget how daily-use technologies like high-quality video conferencing, telemedicine, food delivery apps, and more, emerged only within the last few years. And since that pace will not slow – it will likely get faster – so, clearly there’s a lot more to come.

Rapid-fire technological innovations and improvements will continue in the years ahead thanks to 5G mobile networks, which will play a pivotal role in overall global growth.

As with many things, COVID-19 has accelerated the buildout of the global 5G infrastructure. It’s also making 5G devices cheaper and more widely available. From an investment standpoint, we think three main catalysts are behind this growth, all with direct roots to 2020.

First, the rollout of 5G devices is enabling a more robust internet of things (IoT) ecosystem. This is the world of “smart,” internet-connected devices. You know your refrigerator that goes online? That’s part of the IoT ecosystem – and it’s getting bigger.

This goes well beyond smartphones. The expanded IoT universe includes vehicles, appliances, wearables, homes, remote sensors, and more. All these devices currently or soon will communicate in real time over private 5G networks.

Consider that current 4G network capacity is limited to 100,000 devices per square kilometer. With 5G, that capacity is multiplied by 10. That’s good because according to Ericsson, 5G networks will enable more than 36 billion connected devices by 2025: 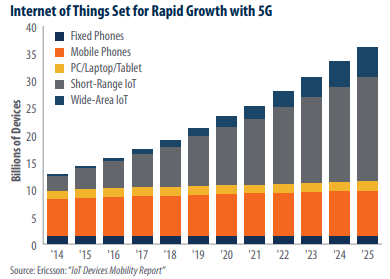 This will generate heavy demand for digital components like semiconductors, sensors, antennas, and more, creating more growth and investment opportunities through our portfolio allocations.

Second, 5G has proven to be a prominent part of fiscal stimulus packages in response to the pandemic. Government officials worldwide are preparing huge infrastructure packages, many of which include provisions for 5G networks.

Proposals in the U.S., Europe, China, and Australia have all set aside specific funding for the transition. Reading the political tea leaves, it seems like 5G will be a key beneficiary of upcoming U.S. stimulus packages, meaning there is opportunity ahead for investors.

To stick with politics for a bit, our third catalyst is how rising geopolitical tensions are incentivizing a rapid 5G buildout. Countries around the world realize that leading in 5G means leadership in technology and innovation overall. Leaders in 5G will boost competitiveness and help mitigate their future national security risks.

As a result, 5G is the new battleground. Just look at how Chinese provider Huawei is being banned across the world.

We’ve seen it politically within the White House urging U.S. firms to acquire telecommunications companies worldwide. And on the regulatory front, the Federal Communications Commissions (FCC) prioritized overhauling outdated regulations and quickly auctioned off new wireless spectrum to U.S. carriers. In the past, these sorts of FCC moves took years to complete. They’re now being done in weeks.

Throughout the pandemic, we’ve seen the obvious value of fast and reliable networking. Thus, we believe 5G network technology appears set to benefit investors because it deeply integrates into new devices, is backed by targeted government spending, and has geopolitical urgency pushing its adoption.

We’re seeing five years of advances in less than 12 months and the pace will continue.

Turning to our usual weekly updates, here are the latest high frequency data showing economic activity and the state of COVID-19 cases and, new this week, vaccine development: 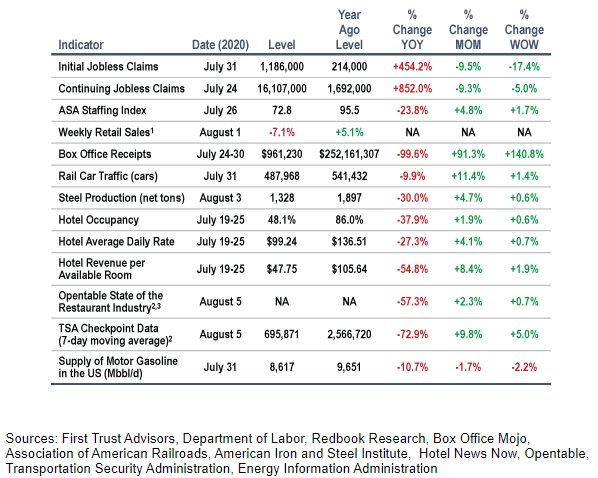 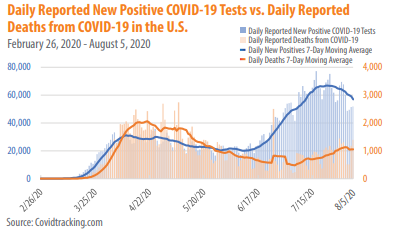 One thing that surprised us recently was the multitude of misleading headlines related to the latest gross domestic product (GDP) report, suggesting real GDP dropped by 32.9 percent. That leads people to think our second quarter output was a third less than the first quarter, which is a gross exaggeration.

To be clear, if the 2020 economy maintained the GDP performance of the second quarter, it would shrink by 32.9 percent for the year.

Additionally, our argument going forward cuts the other way. We project a 15 percent ANNUALIZED rate of GDP growth for the rest of the year. That means the economy will be about 3.6 percent larger in the third quarter than it was in the second.

So, while our post mentioned the GDP rate being annualized, it could’ve been clearer. We don’t think any of the misleading reports were intentional. That said, we’ll make sure to do better going forward, and so should the media.

Our readers know we talk about Map Signals’ Big Money Index frequently – where it stands, if it’s overbought, underbought, and so on.

We’re overbought now and it’s getting historical. Going back to 1990, there were 19 overbought periods that lasted 20 trading days on average. The current period is quickly reaching a record length. By the time of this writing, it should become the longest overbought period in the last 30 years.

It would seem the market has defied historical logic. But we emphasize “seem.”

Since June 8, when we mentioned a slowing in buying (while still overbought), growth has only come from the NASDAQ Composite index. The Dow Jones Industrial Average and the Russell 2000 have declined about 4 percent each during that time. 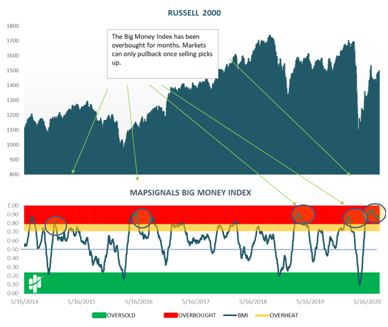 Before you point out how the S&P 500 was also positive, keep in mind that figure is almost solely due to the gains of a few mega stocks: 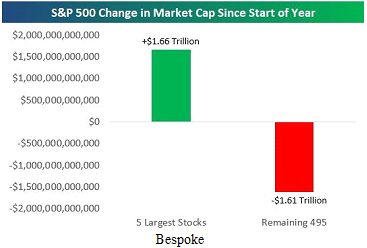 These abnormal factors blind investors to the pullback that has occurred for the vast majority of publicly listed firms. Many folks only see surface deep, but there are powerful undercurrents always at play.

As evidence, see how sellers have vanished again, leading to buyers emerging in some sectors like discretionary, industrials, and materials. But until more sellers return, the overall market should continue to stay overbought, even if that seems illogical.

One reason sellers left is earnings season is going surprisingly well, especially for tech firms. For instance, all the following firms have beaten and raised their 2020 guidance – Apple, Amazon, Facebook, Datel, Skyworks, and AMD. There are a lot more too.

Circling back, this phenomenon is the markets’ forward view into the IoT accelerating a lot faster. All these data serve as hard proof in equities markets that the pandemic, shutdowns, and tech advances are plowing us forward.