Moving on From a Brutal Quarter

Our faithful readers know two measures always on our economic dashboard – high frequency data and COVID-19 infections. These data provide insight into two key components to our recovery – wide-ranging economic activity, which tells us if and how people are spending, and infection rates that could derail progress.

While things aren’t dramatically improving on either front, we are plateauing, which is especially helpful with the virus. 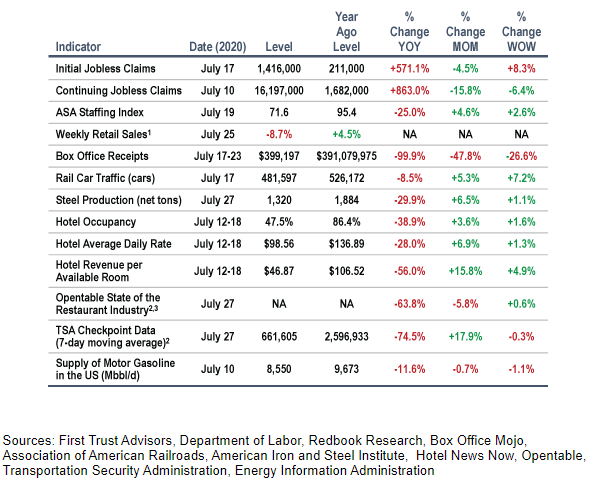 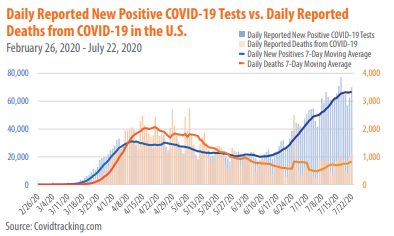 Those measures aside, the major economic item last week was the initial real gross domestic product (GDP) growth report for the second quarter. As the data show, there was a lack of growth, with the economy shrinking at a -32.9 percent annualized rate.

Our expectation was that the second quarter would show GDP shrinking at a -35 percent annual rate. So, while it seems odd to say this, the report was a bit of a pleasant surprise.

Still, it’s the worst quarter on record since the second quarter of 1958, when GDP decreased 10 percent as we wound down from World War II. However, this time around, it’s important to remember we’ve already begun recovering.

In fact, we anticipate a strong third quarter. As we’ve discussed, the economic bottom seems to have occurred in April. Since then, things have picked up. In June, retail sales were up 29 percent, industrial production rebounded 6.9 percent, and housing starts jumped 27 percent.

For some perspective on this, imagine each of those data points stays flat through September. In such a case, we’d still achieve impressive overall GDP growth:

Yes, we’re coming off the worst quarter ever. But there is already data suggesting we’ve reversed course. Therefore, our tentative projection is for 15 percent GDP growth in the third quarter. We see it as the start of the path to full recession recovery.

In the midst of the third quarter of an admittedly crazy year, we have our eyes on a few items as summer ends and fall rolls in.

The traditional August/September “hurricane season” will hit Wall Street hard, as always. As this chart indicates, late-summer market disruptions are normal, especially in the last 20 years: 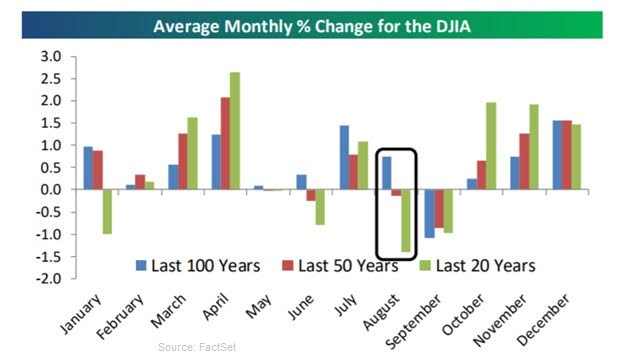 Going into July, there was some hope we’d avoid the normal market dips in August and September. But the resurgence of COVID-19 cases has resulted in new closures and lockdowns, which doesn’t bode well for continued business revival.

Keep in mind though, even without 2020’s pandemic, August and September are typically bad months for stocks: 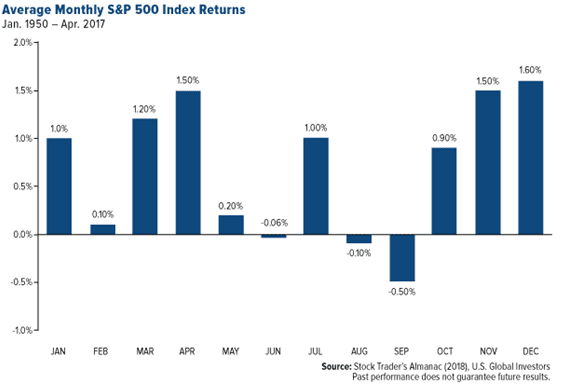 One thing one our side is that, while big money buying has slowed over the recent past, it’s beginning to tick up again. This could maintain sideways movement over the next few months until sellers reappear to create better buying opportunities.

By the looks of it, the November election will result in overall governmental gridlock, which could lift the market higher no matter who wins the presidency.

As distasteful as partisan bickering can be, business does better when the government is gridlocked. That’s because, without a heavy advantage in seats, no side can advance its agenda too far. This is how the system was intended to work; it allows nature to take its course. 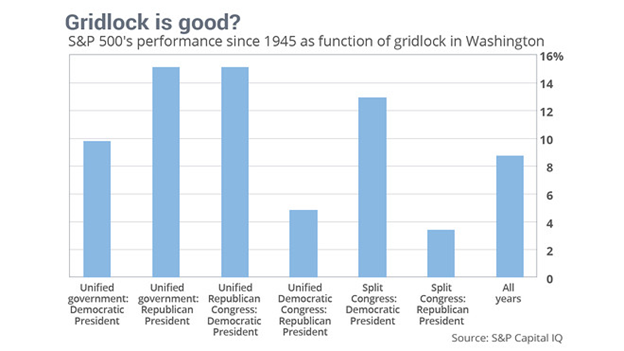 The worst election scenario for investors is a clean sweep that leads to massive tax increases, stalling pent up demand that’s accumulated during the forced shutdowns. It would be preferable for all the “animal spirits” to be released with minimal government interference as the economy naturally recovers.

We think investors will begin to buy (and keep buying) companies with solid earnings, all but ending the love for the faddish, highly speculative plays on firms with so-so (or worse) financials.

Right now there’s an imbalance, with investor dollars concentrated in certain corners of the market. It’s exemplified by the NASDAQ being up 16.5 percent this year, while the Russell 2000 Index is down 12 percent and the Dow Jones Industrial Average is down 7.25 percent.

There are plenty of solid firms within those latter indexes garnering zero respect. After the virus runs its course and the economy gets back to humming, those disrespected companies with solid earnings will play an overweight role in a portfolio’s continued ability to run higher.

As Major League Baseball restarts (and hopefully stays), and other sports plan their respective re-openings, we’re hoping it leads to Americans being able to blow off some steam. Even if the games are TV-only, it could help return some normality to our lives.

Like fans across the globe, we like to cheer for our teams and let the referees know they made mistakes. This is all a cathartic release that’s been missing during the pandemic. As a result, people are on edge and getting angrier about pretty much everything.

So, we hope sports can return and provide the much-needed distractions they usually do. Yelling at another Detroit Lions’ bumble and laughing about it later beats road rage every time.