Explaining These Dog Days of Summer

We haven't seen the BMI plunge to these levels since October 2020, when there was election volatility. And the selling could mean more pressure for stocks in the near term. But we are also paying attention to any signs of sustained increased buying, which incredibly started to show up in our data last week after Monday, July 19th’s selloff, which would be near-term bullish.

On a sector level, there's notable selling in energy, staples, and discretionary, but not much buying (which is causing the BMI to fall):

A couple weeks ago, we showed you how the summer months are usually mediocre in terms of returns: 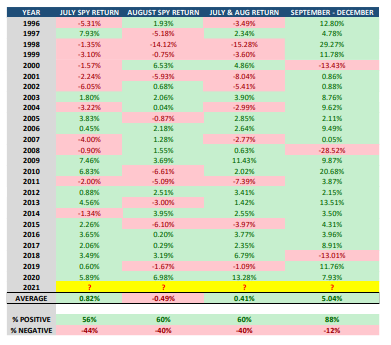 But remember, we just need to get through July and August. Notice the typical pattern in July where buyers dry up, sellers appear, and liquidity wanes. This correlates to Wall Street traders taking summer vacations, but lightening risk before leaving. If you look only at the S&P 500, you may not see it so clearly, but using our underlying data, we clearly see it in the BMI because it's dropping fast: 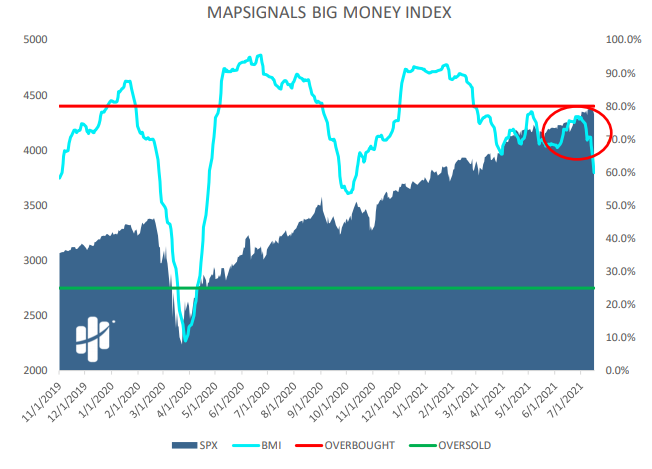 The BMI is below its lows for March, which was also a bumpy time for stocks. Notice how there is a clear distinction between the BMI falling and what appears to be the S&P 500 rising. That’s because “big money” likes to pull a fast one through misdirection. Institutional investors exit stage left as markets rise by selling out of risk before heading on vacation.

We also see a nice summary of accelerated stock selling in exchange traded funds (ETFs). Remember, when ETFs get sold, stocks also get sold. You'll notice in the chart below, the red downward bars are increasing, which indicates selling: 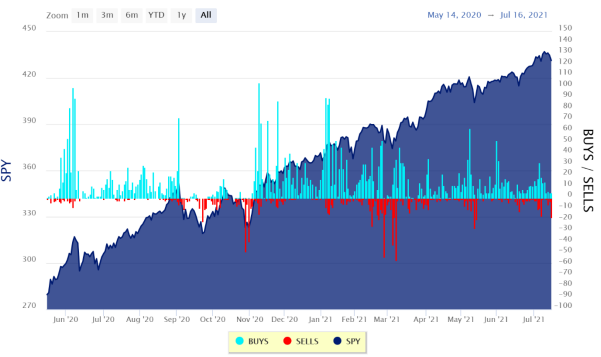 Our readers know that when ETF buying reaches extreme levels, then peaks are usually close. The most recent spike in ETF buying was Wednesday, July 7. And we can see that the SPY peaked on Monday, July 12.

So, while the BMI is falling, the questions are why haven't indexes cracked yet, and will they? Digging into our historical data, the BMI has spent most of its 30-year history above 65%. So, we wanted to see when the 10-day average was below the 30-year average of 65%.

Well, guess what? The BMI has been below 65% since early last week.

In the chart below we used red shading to highlight the instances when the BMI’s 10-day average has been below 65%. Notice we just hit a red patch. Also notice what typically coincides with red patches. 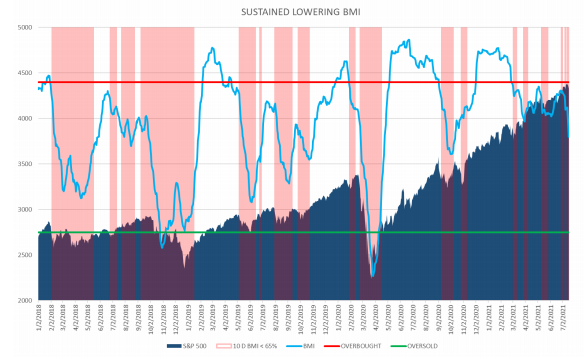 Thus, we could see some volatility ahead. But again, it’s nothing unexpected for July or August historically, as we discussed two weeks ago. We just have some context around what’s happening.

That being said, incredibly, additional data supporting this “volatility” theme showed up mid to late last week after the selloff last Monday.  Suddenly buyers appeared and caused the BMI to stop in its tracks, as shown in the chart below.  Typically, this is bullish in the short term but we also want to point out that these extreme reversals taking place so quickly is exactly the type of volatility we have been talking about in the summer months of low liquidity.  So, does the BMI’s pause signal that stocks are ready to climb?  It’s a possibility but we will be closely watching the data this week to determine if this reversal was a “buy the dip” mentality or something more significant that will lead to sustained buying and new market highs. 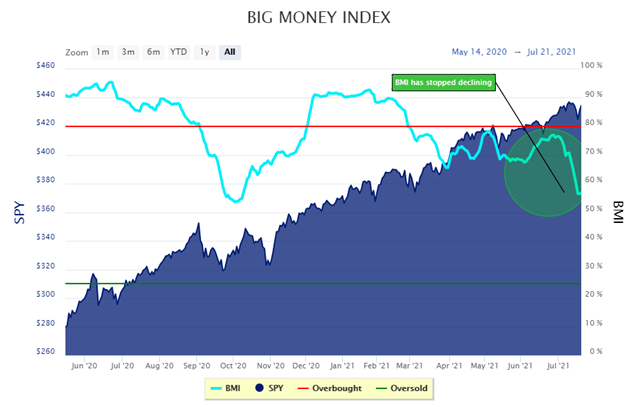