Things are looking up for the U.S. economy.

The update on real gross domestic product (GDP) growth last week showed a 4.1 percent annualized jump in last year’s fourth quarter GDP, which is in line with our estimate of 4.3 percent, and up from our prior projection of 4.0 percent.

Meanwhile, economic data are starting to roll in, and they show 2021 is off to a roaring start. Retail sales soared 5.3 percent in January and are now up 7.4 percent from a year ago, which was before COVID-19 wreaked havoc on the economy. And it isn’t just the demand side picking up. Industrial production increased 0.9 percent in January and we also saw revisions for prior months.

More positivity can be seen in the region where the most economic damage took place, the northeast, which is starting to show its revival. The NY Empire State Index, compiled from a monthly survey of New York-based manufacturers, rose from 3.5 to 12.1. Also, the Philadelphia Federal Index, which measures regional manufacturing growth, came in at a robust 23.1. In short, the battered northeast region of the U.S. seems to be coming back and is contributing positively to our overall recovery.

We’re aware the Federal Reserve Bank of Atlanta’s GDPNow model projects a 9.5 percent growth rate for the first quarter of this year, but that model has been overestimating growth since the recovery started. Also, it doesn't yet factor in how the recent polar vortexes wreaked havoc through much of the country’s midsection.

Regardless, these data make it clear there is virtually zero risk of a double-dip recession, and that's not even taking into account the new $1.9 trillion stimulus bill winding its way through Congress. But keep in mind, most of that stimulus bill is spending for 2022 and beyond. So, it’s arguable whether or not that has anything to do with the pandemic.

As we’ve brought up before, all of the money printing and extra spending will boost demand, which definitely is a recipe for higher inflation. That’s why we continue to discuss it here. We're already starting to see inflation as consumer prices are up 1.4 percent from a year ago. We expect them to rise by 2.5 percent by the end of the year. The increase would be even higher if not for the moratorium on evictions, which currently keeps the government's measure of housing prices artificially low.

While this is great for earnings and equity markets in the near term, it does introduce potential long-term risk. As funny as it sounds, we may be over-stimulating the economy, and it could bring painful unintended consequences.

With all that’s gone on in this past year or so, it’s become even trickier for income-minded investors like retirees to generate a paycheck in today’s market conditions.

As just mentioned, data show real GDP growth and core inflation are rising at a faster pace than previously forecast. That does create inflation risk. So, we’d like to cover how income-oriented investors can position their portfolios in such a scenario.

A key data point to review is the five-year, five-year forward inflation breakeven index. This index measures the expected average inflation rate over the five-year period that begins five years from today. It has risen steadily over the last year: 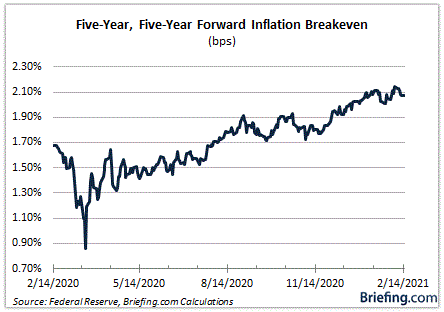 Consequently, it appears as if the Fed’s goal of getting inflation back up to 2 percent has been achieved. The potential problem is the Fed’s other mandate of full employment looks like it could be elusive for the foreseeable future. Despite multiple stimulus packages, the job outlook for millions of Americans doesn’t seem to be improving yet.

Yes, the unemployment rate did fall to 6.3 percent last month from 6.7 percent in January, and has declined steadily since last year’s peak in the early spring: 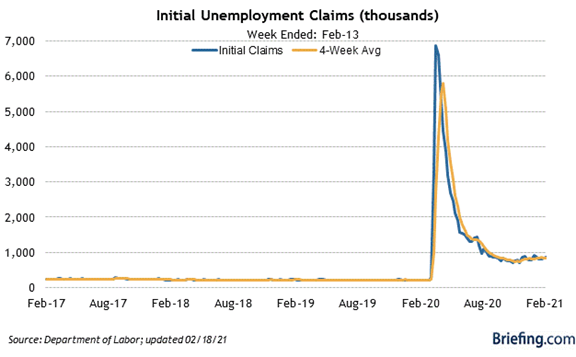 However, that was in large part due to the labor participation rate falling to 61.4 percent, down from 63.4 percent a year ago: 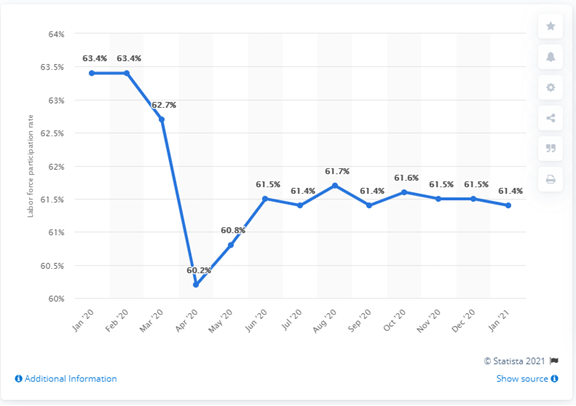 To us, the real conundrum going forward in the second stage of the recovery is how to get these people back to work. This might be especially problematic as companies are producing more goods and services with fewer employees, which is often a natural byproduct of economic crisis. On earnings calls we hear many companies report advances in technology and reduced workforces that are helping to pad the bottom line.

So, until we can have a full reopening of the economy, we believe this “tale of two economies” will continue to exist. But once the airline crews, restaurant, lodging, custodial, amusement park, and a host of other pandemic-plagued businesses come back to life, the recovery will broaden.

With this rise in GDP and inflation, money is flowing out of long-end bonds and it causes a dilemma for investors seeking income. We think there are a handful investment types that can help hedge against low interest rates and rising inflation:

These are bonds and preferred stocks that can be converted into the underlying equities, thereby benefiting from stock appreciation. They’re especially attractive in closed-end funds, which can typically generate yields of 5-7 percent.

Most loans made in BDCs to small- and medium-sized businesses are structured at floating rates. So as rates rise, loans are adjusted to receive more interest. Those increased income streams are passed along to investors as larger dividends.

These typically invest in blue-chip, market leading stocks that are professionally managed. They combine a way of owning the best stocks with a likely yield in the 5-8 percent range.

Carefully selecting subset classes of REITs – specifically those in e-commerce, logistics, data centers, or multifamily buildings – can generate attractive income in the range of 3-6 percent.

In today’s investing environment, there are real concerns about the ability to generate income from an investment portfolio without incurring too much risk. But creativity can breed solutions. The paths mentioned above can bridge the investment income gap so retirees can sustain their retirement paycheck without being tied too much to the whims of potentially volatile markets.