Everyone is talking about the stock market hitting new highs. But there is another bull market beginning to pick up momentum only a few weeks into 2021 – commodities.

This earnings season, many of the earnings calls we’ve been on have referenced the rising costs of “inputs,” which are the myriad raw materials used to make things. Well, rising “input” costs are pressuring profit margins for finished products. This chart shows the recent jump: 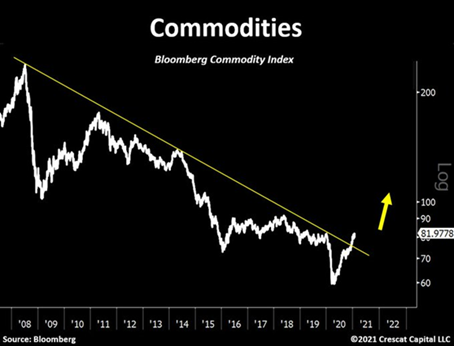 “With every major developed economy still printing headline and core inflation below 2 percent, this is not today’s problem, but there is a reason for that. Metrics such as CPI (consumer price index) and PCE (personal consumption expenditures) are politically convenient measures that strip away virtually all basket components (i.e., commodities), whose prices are surging…”

Costa is referencing how commodities are off to their best start in 30 years, but it’s not really being discussed. The Commodity Research Bureau (CRB) index and the S&P GSCI index, which are broad benchmarks for commodity investments, are up 8.11 percent and 9.71 percent, respectively, as of Feb. 5, 2021:

The CRB index includes 19 commodities across energy, agriculture, and metals. The S&P GSCI index reflects the performance of the entire commodity market. Both measures are similar in nature to stock indexes like the S&P 500, and so far this year, they’re both up. To Costa’s point, year-to-date prices of the core commodities that make up the CRB and the S&P GSCI indexes are up almost across the board, including materials, beef, poultry, corn, tea, canola, sugar, cotton, wool, lumber, rice, and more: 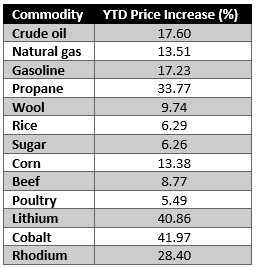 See the last three commodities on that list? Those are required to make batteries for vehicles, phones, and other electronics that power our lives.

We’ve discussed inflation expectations in the past. The above commodity price rises are leading indicators that inflation is coming, and perhaps faster than we expect. So, what are the implications?

Well, for example in energy, there's a transformational shift to cleaner and greener technologies. Remember, only about a third of global power capacity is made up of renewable energy. This bodes well for natural gas to continue to become more expensive following its recent gains. Additionally, Morgan Stanley analysts predicted electric cars and trucks will account for 31 percent of all global auto sales by 2030. As such, we don’t expect lithium prices to fall back, but instead to continue their meteoric rise.

Apart from energy and transportation, maybe most concerning is the inflationary pressures in the food sector. With nearly 8 billion people needing to be fed currently, and another billion on the way in the next 15 years, the strain on global food supply and cost of portability is very real. 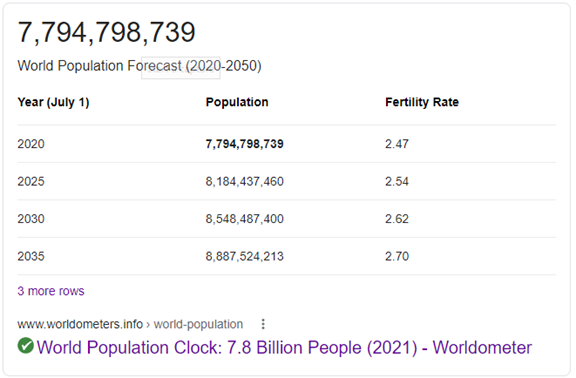 But the commodity that takes the cake when it comes to future inflation isn’t even traded on an exchange – water.

According to Bluefield Research, Americans paid an average of $104.00 per month in water and wastewater bills in 2020. That’s up more than 30 percent in less than a decade. And in the 50 largest U.S. metropolitan regions, water and sewer bills have been rising faster than inflation for eight consecutive years. In fact, since 2009, water bills have tripled inflation: 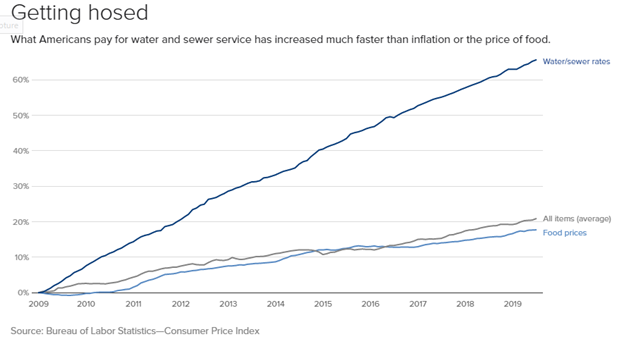 Currently, Bluefield’s research shows water is unaffordable for one in 10 U.S. households. That forecast is expected to triple within five years, according to a 2017 study from Michigan State University. On top of that, the water infrastructure is aging and in need of modernization. According to a 2017 report from the American Society of Civil Engineers, our drinking water is delivered via 1 million miles of pipes across the U.S., many of which were laid in the early- to mid-20th century and have a lifespan of 75-100 years.

So, what does this all mean for investors?

Presently, there’s natural gas and liquified natural gas. For the future, there are renewable energies, battery suppliers, agriculture, water utilities, as well as engineering, construction, and construction aggregates, for when Congress finally bites the bullet on the massive infrastructure spending needed to upgrade our nation, including the water supply.

As mentioned last week, the trusty MAPsignals’ Big Money Index (BMI) was beginning to fall, and the week or 10 days that followed would help tell which direction it would go. At the time, it looked like the S&P 500 had peaked on January 25, 2021. And it did fall 3.6 percent, but then powered to new all-time highs over the last week following the short dip.

What occurred is quite interesting. All the recent GameStop drama placed high-profile money management in a tight spot. Most notably, Melvin Capital lost 53 percent from being short GameStop and had to ask “friends of the firm” Ken Griffin and Steve Cohen for a bailout (which it received).

Why did this happen? Some nasty margin calls.

At the time, those affected had no choice but to sell their well-performing large-cap positions to cover their bad bets. That means they were selling popular stocks like Facebook, Apple, and many others everybody owns. The result was the dip we saw in the BMI in late January.

Brokers got together and halted trading on the “offending” stocks like GameStop, Bed Bath and Beyond, AMC, and others. This gave reprieve to those wounded short sellers because it made buying those sky-high stocks virtually impossible, thus eliminating the possibility of sending them even higher.

This unexpected intervention of brokers banding together meant that the overbought party could continue. The BMI did drop for a bit, but recently sellers have completely vanished and buying has returned over the last week, as we can see another uptick in the BMI (the tan circle to the right): 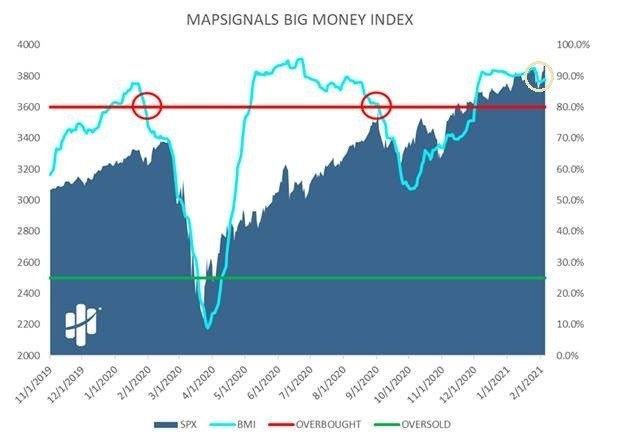 For now, the selling crisis is averted. If selling returns and the BMI data revert down, thus creating market pressure, we’ll be sure to keep you informed. Until then, we remain extremely overbought.