Sometimes waiting for stocks to move feels like standing in an endless line. But many investors, me included, want to know when the technology/growth sell-off will finish.

The November presidential election kind of felt like a reset. Since then, the Invesco QQQ Trust (QQQ), an exchange traded fund (ETF) that reflects the entire technology sector well, has rallied to gain 25%. But it’s been a bit of a rough ride: 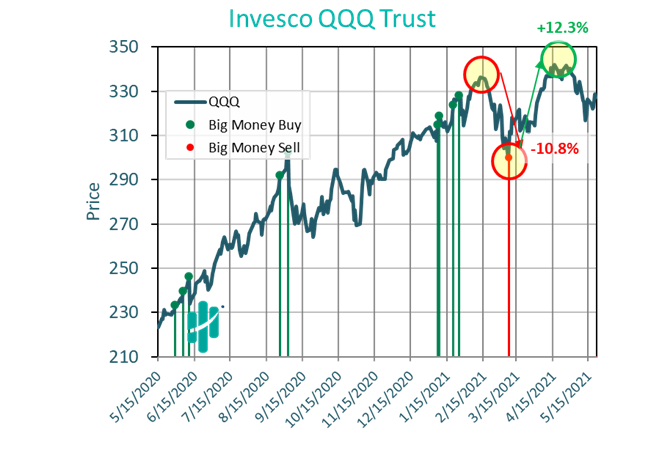 So, the question becomes – are we ready to break out of this churn?

The only way to know is to analyze the data. But often you have to look two or three layers under the surface. Even though last week gave us signs of possible optimism, we want to look a few layers down to understand where growth stocks are going, not where they sit currently.

In our first layer we look at institutional investment activity, where last week we saw 261 stock buys and 102 stock sells. That's buy rate of 70%, which is a healthy reading and good to see.

But we really want to see what's happening at the second layer, which examines what’s being bought and sold. While the below table tells us there is heavy buying in materials and energy, it only tells part of the story.

To understand the third layer down, where we look for the intersections between activity, quality, and performance, we examined the 2,800 stocks traded most by institutional investors. From there, we filtered for strong three-year sales and earnings growth, and were left with 686 stocks. Of those, 349 were positive for the week:

This is further supported by a significant evaporation in selling of growth stocks over the last two weeks: 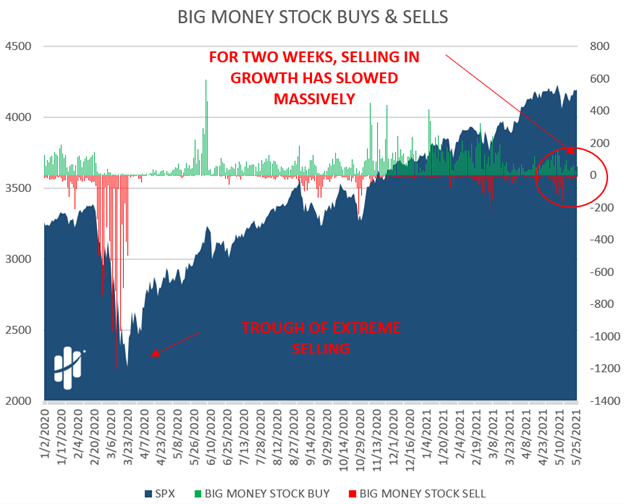 Bringing it all home, that means of all the 2,800 institutional investor signals last week, 349 (or 12.5%) of them were buys for growth stocks. So, while it's one thing to look at indexes, it’s quite another to dig multiple layers deep and find out that the stock market's major victims since February are getting some much-needed love lately.  This thesis is also supported from a fundamental perspective when looking at earnings.  According to FactSet, the S&P 500 recorded year-over-year earnings growth of 51.9% and, drilling down, technology stocks trounced estimates with 94% of the sector exceeding revenue estimates.

While it may be too early to tell if all the bloodletting in growth stocks is completely finished, these data-driven positive signs are something we can get excited about. Never forget what hockey legend Wayne Gretzky said about being opportunistic: 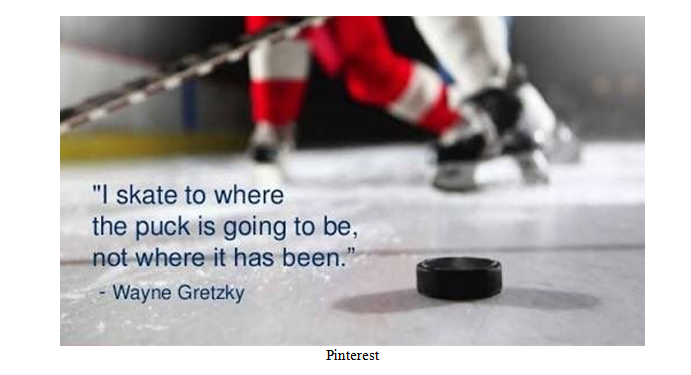 There's not a day that goes by without investors hearing about “green energy trending hot” or something similar as interest in Environmental, Social, and Governance (ESG) investing continues to grow. This is especially so as a strong global and domestic narrative solidifies for a net-zero carbon emissions world by 2050.

In our opinion, there’s reason to be optimistic about reaching such a lofty goal, as there's no shortage of capital to fund this endeavor. According to Bloomberg, total investment in renewable energy projects, electric vehicles, and other green efforts exceeded $520 billion last year. Green spending was up 12% from a year earlier and up 60% from 2015, per Bloomberg.

This past weekend, the Wall Street Journal reported, “As recently as 2014, the world's energy companies, spent $735 billion on oil and gas extraction. The figure was less than half of that last year...Wind and solar projects rose to nearly $220 billion, up from about $135 billion six years earlier.... Some analysts predict spending on renewable energy will exceed oil and gas in the next several years.” 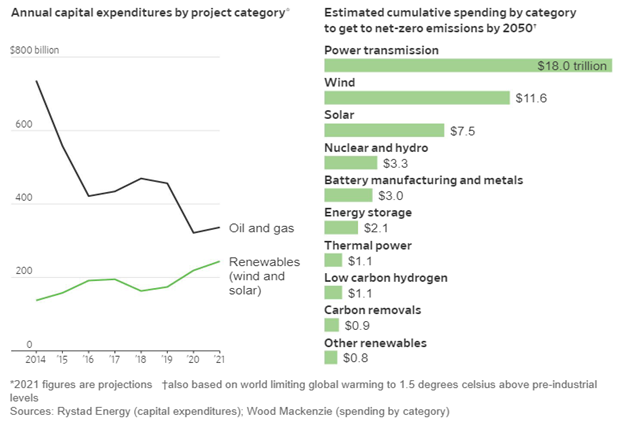 The same article also said at least $50 trillion (yes with a “T”) in investment will be needed to reduce fossil fuel and other greenhouse gas emissions by 2050 to meet the goals of the Paris Climate Accord. The article went on to say, “Assets in investment funds focused partly on the environment reached almost $2 trillion globally in the first quarter, more than tripling in three years. Investors are putting $3 billion a day into these funds. More than $5 billion worth of bonds and loans designed to fund green initiatives are now issued every day.” On top of that, activism on climate-related issues from institutional investors is increasingly common, which could be another green growth catalyst.

We point out these statistics in both spending and capital flow to highlight the investment opportunity over the long term. This was and continues to be our thesis for adding a clean energy fund in our models at the beginning of the first quarter in 2021.

But now we want to answer the question of what to do for income investors.

Since the ESG movement is still relatively young in terms of scaling, almost all assets dedicated to ESG energy projects are purely organic growth investments in nature. In other words, the “growth value” in growth stocks remains tied to the stock and is not paid out to investors in the form of dividends or interest, which is what income investors rely on.

But that doesn’t mean ESG is out for income investors. There are opportunities to invest in ESG and generate income.

One would be the electric utilities sector. The multitrillion dollar transformation to green and renewable energy will, in our view, have an insulating effect on how utility stocks trade going forward, resulting from upward revisions in growth rates. These green utilities are on the receiving end of current and future massive capital inflows that will lead to increased and consistent cash flow going forward.

Consider that for every new and additional electric truck, car, delivery van, 18-wheeler, motorcycle, or scooter that hits the street, the need for electricity to charge and recharge it will skyrocket for many years to come. That doesn't even take into account smart homes, smart cities, and more than 3 billion devices being connected by the Internet of Things, all of which will cause electricity demand to surge. Therefore, it seems reasonable those utilities that dominate the electric grids will benefit immensely in both revenue and profit growth, while also generating attractive and growing dividend payments.

Once solar, wind, hydro, thermal, and biomass infrastructures are built and operating, they become cash flow machines for these types of companies. Looking at the one-year chart of the Dow Jones Utility Average Index, we can see pullbacks off recent highs, therefore providing an attractive tractive entry point:

Without going into specific stocks – it's probably too early to even undergo that type of analysis – we want to point out two top utility ETFs. Right now, they are the Utilities Select Sector SPDR Fund (XLU), which has a current dividend yield of 3%, and the Vanguard Utilities Index Fund ETF (VPU), which pays a current dividend of 3.07%. Utilities that were once stodgy coal, oil, and natural gas burning companies with low, single-digit growth rates will be generating wider profit margins as renewable assets become paid for and represent a bigger percentage of revenue.

A second place to look is natural gas. It can be argued natural gas will play a major role in power generation that coincides with the push for renewables. This energy source is clean, cheap, and incredibly abundant within the U.S. Plentiful sources, combined with the long-term transition to renewables and the current high utilization rate, create a harmonious path to meet long term goals without major disruptions. And investors aren’t without options in this space as there are a slew of ETF and index funds specifically focused on natural gas that pay attractive dividends.

All in all, investors looking to generate income from clean energy can do so. And it seems that their options (and prospects) could improve in the future as the renewable energy transition continues.