Tech Wreck? Not So Fast

[Editorial note: this post cites the Invesco QQQ Trust (QQQ) exchange traded fund as a benchmark for technology investments because it’s a good reflection of the entire technology sector and offers the editorial convenience of a single ticker symbol.]

The current market correction in the technology sector is sizing up to be a textbook consolidation, following a torrid rally in the tech-heavy Invesco QQQ Trust (QQQ). “Reopening euphoria,” combined with rotation into financials, industrials, materials, energy, transportation, and leisure stocks, cut short-term air out of the tech sector.

We view it as a classic reversion-to-the-mean scenario and have mentioned this type of cyclical rotation in several blog posts. As of this writing, the consolidation is in its sixth week, and as we enter quarter-end window dressing for large funds, the value and cyclical sectors will likely remain elevated in the short term. To us, this month-end “prettying up” of portfolios seems to negate how, from a macro-level view, most value and cyclical stocks are now technically very overbought and due for a pullback.

But with that said, there is no doubt professional fund managers with good track records are not overly wild about owning cruise line, airline, restaurant, hotel, and casino stocks, many of which are now trading at higher prices than before the pandemic. These managers are more likely to rent than own these types of stocks, especially equities of firms relying on rising raw material input costs and large pools of physical labor.

In the big picture, they (and you) want to own companies engaged in trends that include 5G, the Internet of Things (IoT), mobile e-commerce, cloud applications, fintech, electric vehicles, artificial intelligence, cybersecurity, robotics, the smart electric grid, and so on. If for no other reason, look at the spending priorities within all sectors: 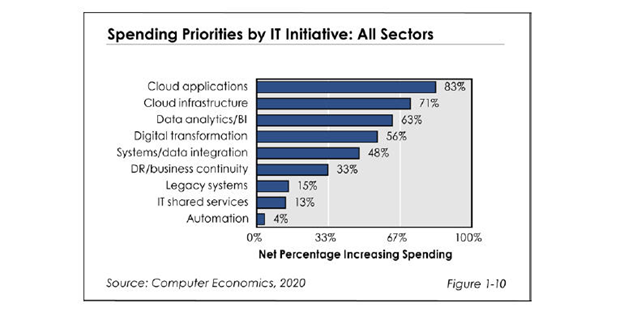 No doubt American ingenuity excels in literally every industry, but it's the mega trends in technology with double-digit long-term compounded annual growth rates (CAGR) that are of the most interest to us. Value, cyclical, and epicenter companies have streaky sales and earnings growth, and we could reasonably argue that most of the future sales and earnings growth have been priced into those reopening stocks. It’s why we moved into these sectors in the latter part of 2020, not now.

At the same time, the QQQ is seeing fundamentals rapidly improve for most of the technology sectors noted above. This is evidenced by our research on corporate spending and mid-quarter updates by some leading companies. When we look at the three-year chart of the QQQ, the 20-week moving average still shows a bull trend:

It’s the shorter-term charts that show higher levels of implied volatility. And that’s a reflection of multiple contractions of the most high-beta stocks from companies with soaring sales growth, but no earnings or price-to-earnings ratios to speak of yet.

To further illustrate the bullish business forecast, Kiplinger released the following on March 4, 2021:

“The pace of (business investment) is now 8.7 percent above its pre-pandemic level and new orders are 9.7 percent higher…even though many uncertainties about the economy's progress remain, businesses are apparently deciding to push ahead with expansion plans that had been on hold in order to be prepared for the eventual recovery….”

On a more micro-level, some of the most likely beneficiaries of bigger spending include makers of industrial robots and 3D printers. Robots eliminate the risk of physical distancing among employees and don’t require benefit packages. Kiplinger says a record 37 percent of U.S. assembly plants plan to invest in 3D printers, which have come a long way. Furthermore, all technology spending segments are forecasted to return to growth in 2021: 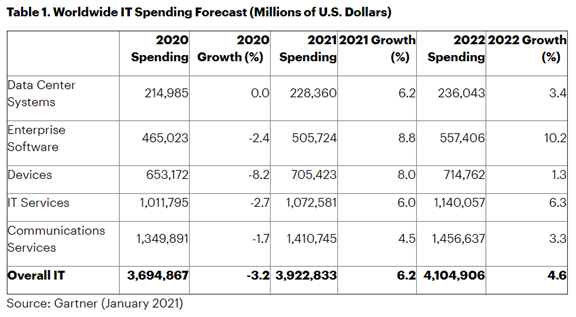 Enterprise software is expected to have the strongest rebound as remote work environments expand and improve. Device segments will see the second highest growth rate in 2021 and are projected to reach $705.4 billion in spending. A good portion of the increased spending is to support the expanding global remote workforce and deliver robust performance that can compete with the corporate campus infrastructure model.

Gartner, a research and advisory firm, forecasts almost 50 percent growth in the work-from-anywhere labor force, as this is shaping up to be a permanent shift in corporate culture: 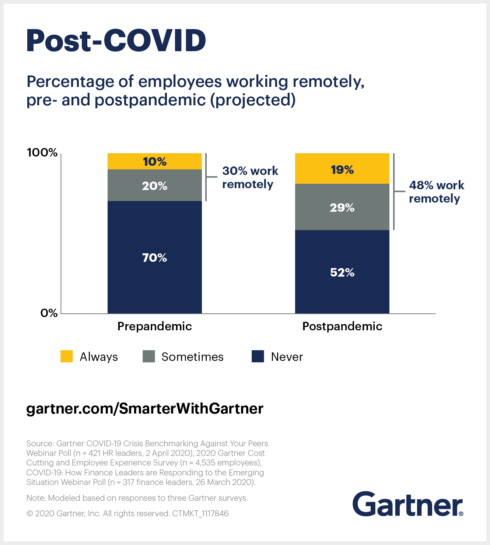 The acceleration in software and semiconductor spending will show up strongly in first quarter results, which will be announced in a few weeks. By then, or perhaps starting then, we should see this “tech wreck” reverse, and it probably will be driven largely by solid performance.

So, take the tech doom and gloom narrative with a grain of salt. Our reliance on technology won’t fade. And as the forecasts show, spending will strengthen, which should drive returns. Performance and earnings still matter, and they’ll continue to matter more as things normalize.

Additionally, forward-looking guidance should prove to be a catalyst that puts the technology sector back on track to trade at new highs and regain its market leadership through the second and third quarters of this year. But there’s a caveat in the ever-heated 2-percent mark on the 20-year Treasury note, as this is a psychological marker for algorithmic high frequency trading mobs.

We recognize the past six weeks have been tough on the technology sector, and particularly brutal for some stocks. But after storms, there are rainbows. The reality is we hit a bumpy patch between earnings due to the “reopen trade” being alive and well, vaccinations taking place at lightning speed, and plenty of pent-up demand. All of this caused tech companies to be punished, fairly or unfairly.

But remember, technology is where the juice is in terms of forward-looking fundamentals. Look at the below FactSet chart of companies within the S&P 500 that released positive guidance over negative. Do you see a positive outlier here? We do – technology.

In reality, as we've always said, overbought markets eventually need to pull back and consolidate. But since that seems to have occurred, buying up the best blue chip technology stocks may prove to be a savvy investing strategy heading into April.