During the COVID-19 economy we’ve been providing economic- and market-related updates in every post. Typically, the economy leads off. However, this week we’re going to start with market updates because, after the last couple weeks, there has been a consistent question for investors.

Will the Market Find Footing or Continue Slipping?

It’s easy to misinterpret the news and think the latter, especially with so much negative data and analysis.

Take retail bankruptcies, for instance. People lamented Lord & Taylor, a nearly 200-year-old company going bankrupt. But how long was the firm against the ropes? As with technology, one of COVID-19’s effects on the economy has been to speed everything up five years, including bankruptcies.

Not surprisingly, with the “never-ending rally” seeming to be over, the flood of negative news has strengthened. So, are we headed for a reckoning that’s been long overdue?

In our opinion, the short answer is no.

The longer answer is the market is experiencing a much-needed pullback. But more importantly, there’s a real rotation occurring within equities. Profits are being taken out of technology stocks. And while we believe the future is tech-driven, recent price rises were a bit much and needed to regress towards Earth.

These developments show not only sector rotation, but also the importance of asset allocation within diversified portfolios. The money leaving technology and energy is mainly entering the discretionary, healthcare, and staples sectors. Such activity reaffirms our decision on September 8, 2020, to initiate a mid-quarter rebalance, when we trimmed our technology stocks and tactically rotated in consumer discretionary and home building positions.

On a broader level, the market is seeing less demand for stocks. As we’ve discussed ad nauseum, the BMI foresaw this for a while. With the benefit of more data and hindsight, we can see it’s been falling since June, even as news was quite bullish: 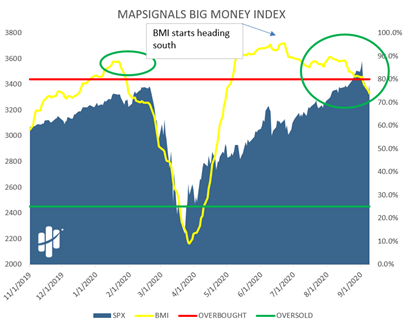 This is a good example of how nailing the exact tops and bottoms of market runs is a puzzle nobody will ever solve. Thus, attempting to time the market is a fool’s errand.

Generally, we like it when the BMI is moderately trending higher between the green and red lines. It means there’s a healthy balance between buying and selling, but in favor of buying. This allows for a gentle uptrend overall and sustained favorable market conditions.

It’s important to remember that none of us know the future. All we can do is interpret data in real-time and react. Our data does suggest a weaning appetite for stocks in the short-term, thus we do expect the next few weeks to be choppy.

But we also think demand will return to lift markets in late fall and early winter. Support for this thesis can be seen in our 0-percent interest rates, which the Federal Reserve recently said will be there until at least 2023.

That means there is no better place for investors’ money than equities because owning the S&P 500 just for its dividends is 244 percent more lucrative than the yield on 10-year Treasury notes:

Economic Rise May Just Be Starting

Speaking of the Fed, announcing 0-percent rates until 2023 is significant news. The Fed’s timeline is two years longer than our original projection of 0-percent rates through 2021. When considered with the economic data below, it’s clear we’re on a steady recovery path from the deep recession lows in April.

For example, high frequency data and our standard COVID-19 report continue to show progress. There have certainly been health-related setbacks, especially on college campuses. But the world is learning to cope while treatments improve, and a vaccine is hopefully coming soon. 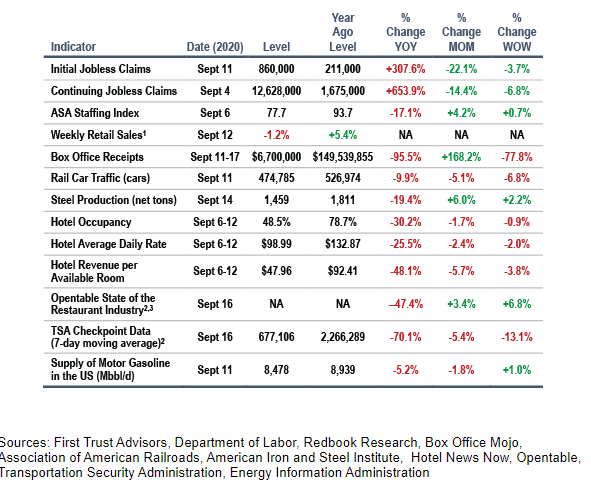 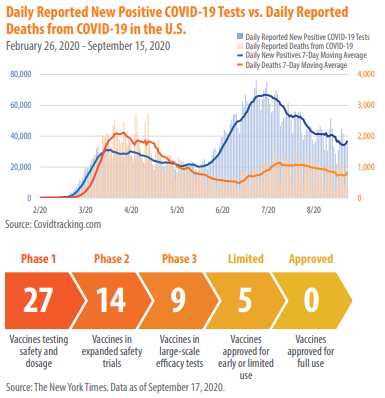 Additionally, new data show the M2 money supply is up 23 percent in the past year, which is the fastest growth rate on record. The money supply grew much quicker than during the heavy rounds of quantitative easing that occurred from 2008-15.

Also consider the record levels of personal savings. While savings were at an all-time high of $6.4 trillion in April, they were halved by July. Still, the current level is well above the pre-pandemic level of $1.1 trillion: 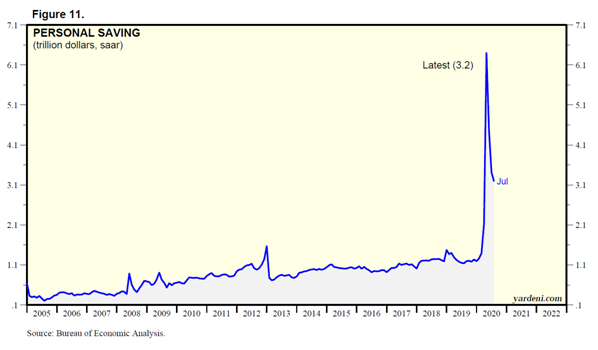 In other words, there’s still plenty of cash to be deployed into the economy. That fact makes last week’s retail sales numbers (up 2.6 percent over August 2019) seem as if there’s more spending to come.

For some perspective, retail sales from February to April fell 17.7 percent. When factoring in the August numbers, we’re now 2.5 percent higher overall than in February. That means retail sales have seen a full v-shaped recovery, while people still have record personal savings on hand.

All these considerations, along with the data we discussed last week, continue to indicate we’ll see annualized real gross domestic product (GDP) growth of about 25-30 percent in the third quarter. And with the low interest rates, ample cash, and healthy spending appetites we’re seeing out there, hopefully this GDP growth will continue for some time.