We’ve spread our wings a bit lately in terms of blog topics, talking about taxes, regulations, and politics in general as the election nears. They’re important discussions, to be sure.

We’ll continue them in the future because today we’re going back to Cornerstone’s bread and butter – economics and markets. Significant economic and market data came out recently and they’re worthy of analysis because of the reality they reflect.

There has been a constant stream of market naysayers since mid-March. But when the Federal Reserve essentially took over Wall Street, and Congress passed huge spending bills to support the economy, the market never looked back.

While we’ve seen recent volatility going back to just before the Labor Day holiday weekend, we can’t forget the similar (and brief) consolidation that took place in June when big returns from March lows were realized. These torrid gains can somewhat be explained economically, now that 98 percent of firms have reported earnings.

The results were outstanding. According to FactSet, 84 percent of companies beat their earnings estimates. Once again:

Additionally, gross domestic product (GDP) is growing. It could almost be considered a glorious third quarter, as the Federal Reserve Bank of Atlanta’s GDP Now estimate indicates as much as a 30-percent quarterly bounce: 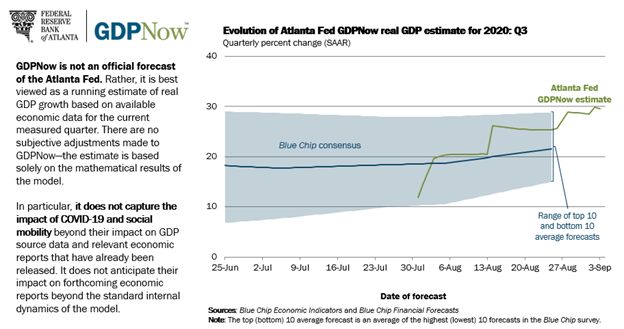 These data show how the U.S. economy is like a coiled spring. Firms have gotten leaner and meaner in the last five months, much like when we emerged from the 2008-09 Great Recession. Back then, earnings growth exploded by 50 percent on only 10 percent recovery in revenue growth.

We think the lessons learned have allowed for faster implementation of fiscally strong economic strategies by companies today. In other words, they were better prepared. Thus, earnings and strong company leadership, as well as continued green shoots in data related to economic activity and COVID-19 cases/vaccine/therapeutic development are all positive headwinds. 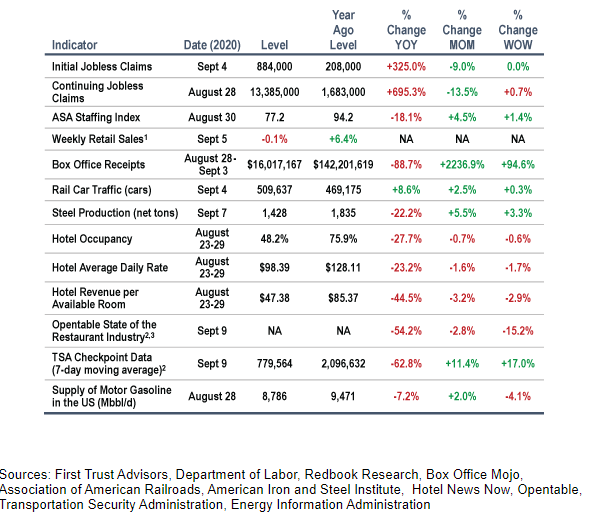 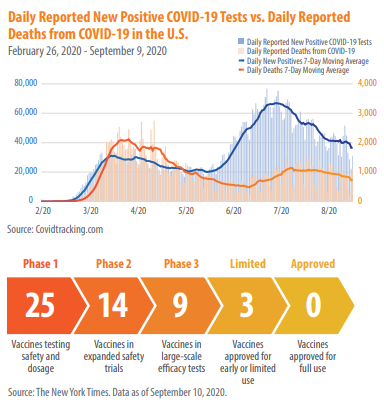 Further examples of our recovery are in the jobs report from September 4, which saw unemployment decline dramatically to 8.4 percent from 10.2 percent in July. This easily beat estimates.

Additionally, in just the past two months alone, 3.1 million jobs were created, while the labor force participation rate rose to 61.7 percent. Pair that with the fact that people are working more hours for increased pay and there’s really only conclusion – these are all good signs!

The positive economic news doesn’t stop there as several more developments are acting as tailwinds, including:

Overbought No More, For Now

As we’ve discussed for a while, the market has been overbought for a record amount of time. Well, after months of straight upward movement, we saw a correction, and so far has been similar to what we saw in early June.

These corrections are natural. Markets go up and down. A correction is also healthy in the same way trimming trees is good – that is, it helps promote positive, long-term growth.

But this recent correction was noteworthy because it was swift.

Prior to the Labor Day weekend, we observed essentially polar opposite readings on equities markets from Wednesday, September 2, to Friday, September 4. That’s when the record overbought period finally ended, as stock data transitioned from Wednesday to Thursday: 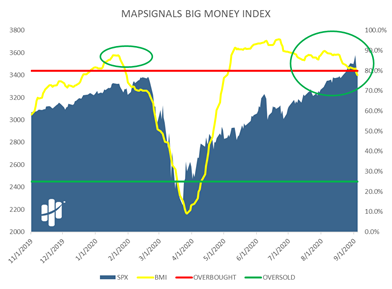 Weirdly, that Wednesday, we saw immense buying prior to the sell-off over the following three days. The news assured us it was a disconnect between the market and the economy. But as we just discussed, economic data are trending up.

Alas, with an overbought market, at some point, things just become unsustainable.

One of the best indicators of the market’s top popping off is when not only stock buying is crazy but exchange traded fund (ETF) buying is even crazier. There’s a clear inverse relationship between heavy ETF trading and future market prices – generally, big ETF buying means lower prices ahead. 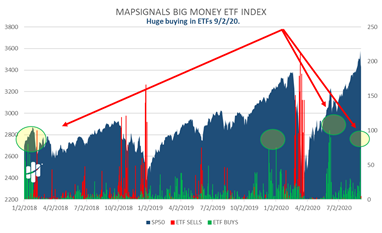 The recent buying has been monumentally huge. In fact, only 10 trading days in the last 30 years have had more than 70 big money ETF buy signals, and Wednesday before Labor Day was one of them.

So, what is this going to look like going forward? In the below table, we can see historical returns after big money ETF buys. Note the dates – many are recent. So far, it appears the recent correction data are similar in nature to June 2020.

Heading into the correction, almost nine of the 11 S&P 500 sectors experienced noteworthy buying (highlighted in yellow):

As if hitting a brick wall, all that buying stopped and brought on the sell-off.

We saw some sell signals, mainly in Energy and Communications. And even though there was monster selling in big technology equities, because they were at such lofty highs, we didn’t see many sell signals. For that to occur, three-month lows must be pierced. But that may not happen soon because, if recent trading is any indicator, it seems the “sell trend” is already leveling out.

What do we think of all this?

Well, the short-term selling was a much-needed return to Earth. Nosebleed valuations were rightfully hammered back down. But as we noted, earnings reports are looking great, and we expect them to look even better next quarter.

Therefore, we took this opportunity on Tuesday, September 9, to rebalance all our client portfolios. It provided us with three benefits:

Now, we must be clear that it wouldn’t be surprising (or even unexpected) to see a “real” correction between now and the November election. And we don’t mean a few days of aggressive selling, but something more sustained. If that happens, see point three above, and remember how the macro economic data is positive.