How a “Blue Wave” May Affect Taxes, Investing

With the election about 10 weeks away, many of our upcoming posts will use a fact-based lens to examine how changes in the federal government could affect policy. We’ll start today with taxes because they could impact our investment outlook and portfolio allocations.

If there is a Biden administration but the GOP keeps the Senate, there should be little to no change. Such a scenario likely introduces gridlock, which is typically is a good thing from an investment perspective as the market prefers the certainty that gridlock provides.

But as with many investors, we’re investigating more closely the possibility of a President Biden and a Senate with a Democratic majority. This combination could invite special budget processes on Capitol Hill to change tax laws permanently with a simple majority, a strategy employed by President Clinton in 1993.

As such, we’re going to examine five realistically possible tax proposals to gauge their economic effect and the viability of them becoming law.

Raising the top income tax bracket to 39.6 percent from 37 percent

If the Democrats win the Senate, we think it’s highly likely they’ll raise the top personal tax rate. But the move is mostly political as the economic effect would be minimal. The 39.6 percent rate is consistent with the top rate in both the Clinton and Obama administrations.

Raising the corporate tax rate to 28 percent from 21 percent

Like the personal rate, we think a Democratic Senate and White House also will be able to raise the corporate tax rate. Besides, did anyone really think it would stay at 21 percent forever? Still, 28 percent is lower than 35 percent, which was the rate from the early 1990’s through 2017, thus we would expect the effect to be muted.

Ending the step-up basis upon death

This proposal probably isn’t as likely to succeed because it would take more than a slight majority for passage. Additionally, if it were to become law, there would be an ensuing administrative nightmare. And since Democrats know many heirs are far from wealthy themselves, an estate tax reduction is a more likely reform.

This would be more troublesome for economic and market growth than it would be beneficial for tax revenue. Two decades progress towards eliminating double taxation on investment proceeds would be undone. Similarly, these moves would create a disincentive to invest.

But, even for Democrats, this will be a tough sell – even Jimmy Carter thought a higher capital gains rate (as high as 39.6 percent) was too high!

Applying Social Security payroll taxes to those making $400,000 per year or more

This is the most aggressive of the potential proposals. A 12.5-percent tax hike would be a large disincentive for high-income workers, especially if it were lopped on top of a 39.6-percent income tax bracket and the 2.9 percent Medicare tax.

All told, that’s more than 50 percent in taxes before even accounting for state and local taxes, which in California can be 13.3 percent or more, for example. However, this is the least likely of the five proposals to pass as it would take the support of 60+ senators due to the fact that the Senate cannot use the special budget processes for this.

To summarize, many people are talking about the potential tax ramifications of a blue sweep in November. But even if that happens, we don’t think the wave will be powerful or long-lasting enough to generate a significant dampening effect on economic growth.

For our weekly economic and markets update, we’ll start with high frequency data on economic activity and COVID-19 updates. We continue to see mostly green shoots of week-over-week progress and a continued flattening of the curve: 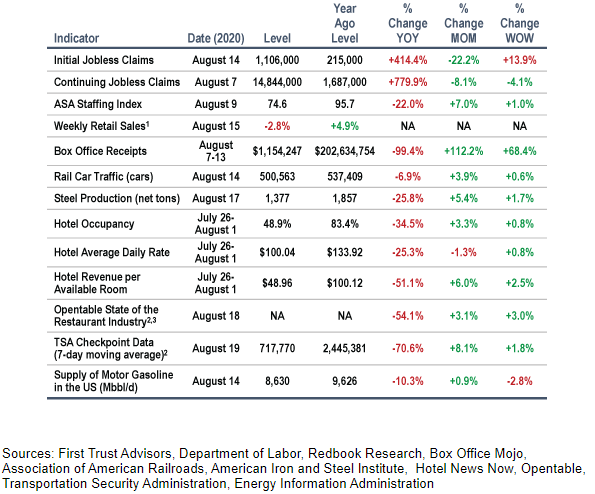 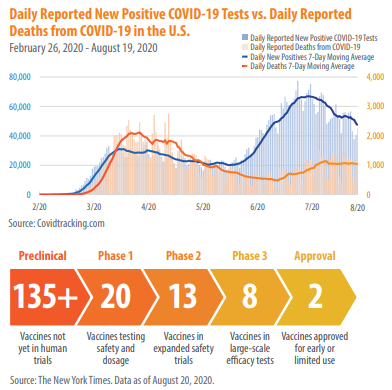 The big news from the past week is the numbers from July housing starts, which are now just shy a full V-shaped recovery, sitting at just 4.5 percent below February levels.

Housing starts increased 22.6 percent in July, easily beating the consensus. New building permits increased 18.8 percent, also beating expectations. All in all, housing starts are up 23 percent over a year ago, which is a definite positive.

Moving to the market, as you can see from the chart below, we’re still firmly in an overbought period. That said, things are holding strong. 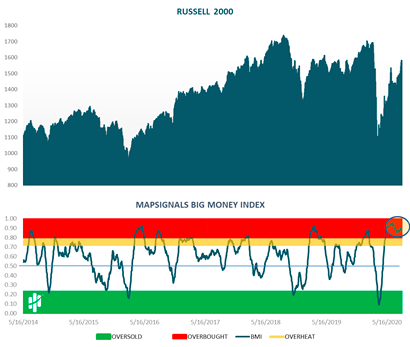 At the same time, we continue to see no significant selling in Map Signals’ Big Money ETF Index: 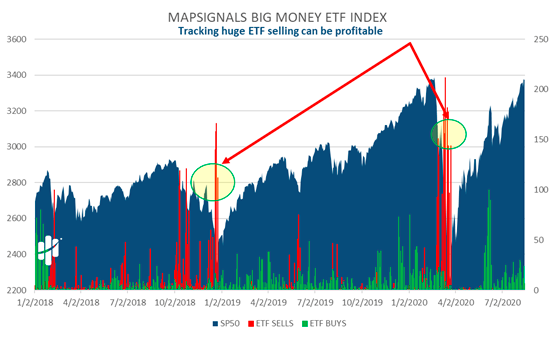 As we dig deeper into the sector charts of the Big Money Index, we see the detail of the selling stalemate. However, it’s interesting to note buying is alive in Materials, Industrials, Communications, and Discretionary stocks.

It’s not a significant amount of selling. Still, it could be a leading indicator that drives us to rebalance our portfolio sector allocations to follow this trend. These data points may also reflect the start of sustained economic growth.