Election Could Be a Regulatory Turning Point

Like last week, we’re going to continue analyzing what a political shift on the federal level could mean for investors. In this analysis, facts guide us, and objectivity is the sole mission.

Like many other people, we’re trying to gauge what November could hold. Elections always mean more than just markets. But our concern from an analytical standpoint is the market impact, and to a lesser degree, the economy, because it feeds into market impact.

While some suggest a Biden presidency could shift the U.S. from pro-growth policies, if that were to happen, it’s possible any market effect could be muted.

We think policies matter. But we also think larger macroeconomic forces matter more. For instance, it would’ve been a mistake to pull out of markets when either President Obama or President Trump entered office, as markets favored both presidents.

Still, we’ll look at regulation in a Biden presidency since deregulation has been a clear priority for President Trump, especially in the Financial and Energy sectors. However, that impact hasn’t been reflected in relative sector performance within the S&P 500. That doesn’t mean deregulation wasn’t economically supported. Rather, it means the policy impact was small relative to broader economic forces.

We also need to remember the cost of regulations on small businesses. Large, publicly traded firms that make up major stock indexes can withstand the costs of regulation. In fact, in some cases it’s a competitive advantage because smaller competitors cannot handle these immense costs.

Therefore, overregulation may not have a big impact on stock index performance. But small and medium-sized businesses are the soul of the U.S. economy. One would hope they’d be the lifeblood of a sustained recession rebound.

Encouragingly, a Democrat-led government would likely unwind many of President Trump’s deregulatory efforts that have proven to be growth hurdles. Specifically, immigration policy has reduced labor flexibility, while trade policy has caused supply chain issues for businesses of all sizes.

From a sector standpoint, we think three industries are particularly vulnerable to regulatory reforms under Democratic leadership.

The first is Financials. If they take the White House and Senate, Democrats would likely tighten rules on the Financial sector. Even if they don’t sweep, a President Biden probably means key regulatory posts would be filled with pro-regulation appointees.

Second is Energy. If a Green New Deal never materializes, oil and gas companies will probably still suffer under Democrats because a president can do a lot independent of Congress.

Lastly, we have Healthcare. Under Democrats we’d probably see an expansion of the Affordable Care Act and changes to drug pricing. Both could affect the financial performance of healthcare providers and this sector.

From a market standpoint, this is where our focus will be, at least until the November election. Thus, we’ll dictate our asset allocations accordingly.

We continue to monitor high frequency economic activity data and COVID-19 data. The biggest item of note is how hospitalization and death numbers have been improving for weeks, which should drive continued improvement in the high frequency data: 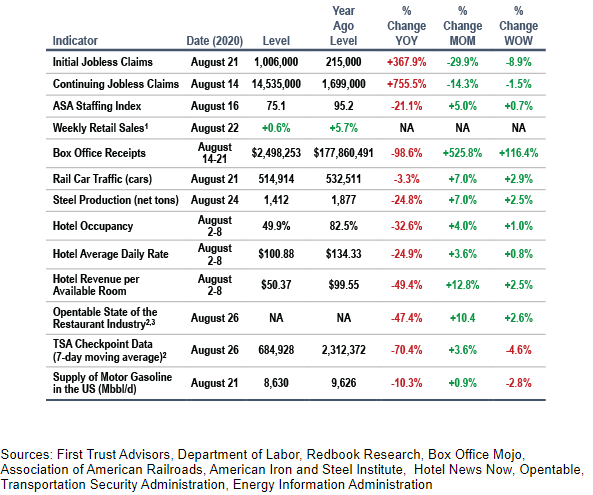 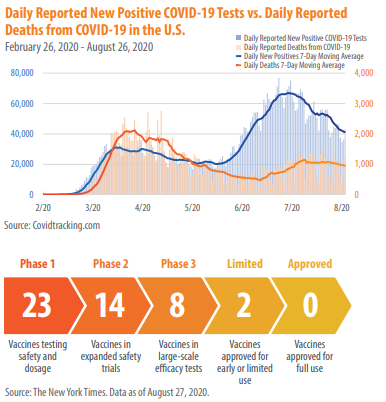 As mentioned last week, home building numbers continue to outshine expectations. There is undoubtedly a V-shaped recovery happening in this part of the economy.

But even with recent increases, the 20-year housing start average has only been 1.265 million homes per year. Earlier in 2020 we looked at the housing sector and suggested the U.S. needs at least 1.5 million new builds per year to keep up with population growth and scrappage. So, there’s clearly still room for growth.

Based on that data, even coming out of a recession, we expect housing to be a significant tailwind to U.S. gross domestic product and economic growth overall. We also expect national average home prices to continue increasing, potentially with a wide dispersion between metro and suburban areas, especially with many folks’ ability to work from anywhere.

As a result, Cornerstone may re-add a homebuilding sector asset allocation in model portfolios, as we did at the start of 2020.

For months we’ve focused on equities. Not much has changed over the past week there, so we’ll shift to fixed-income markets, where we’ve noticed some interesting developments during this recovery.

As you can see in this chart, COVID-19 has had a negative impact on cyclical categories in the bond market, as there was a significant flight to quality (i.e., government-backed debt) during the heart of the market correction: 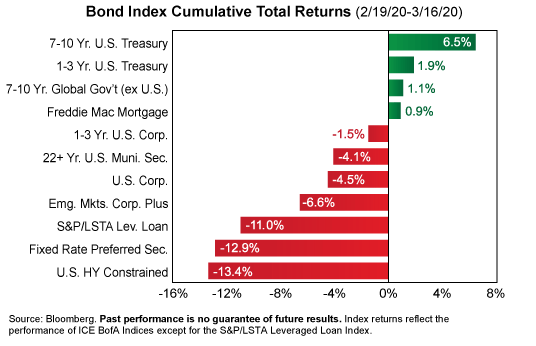 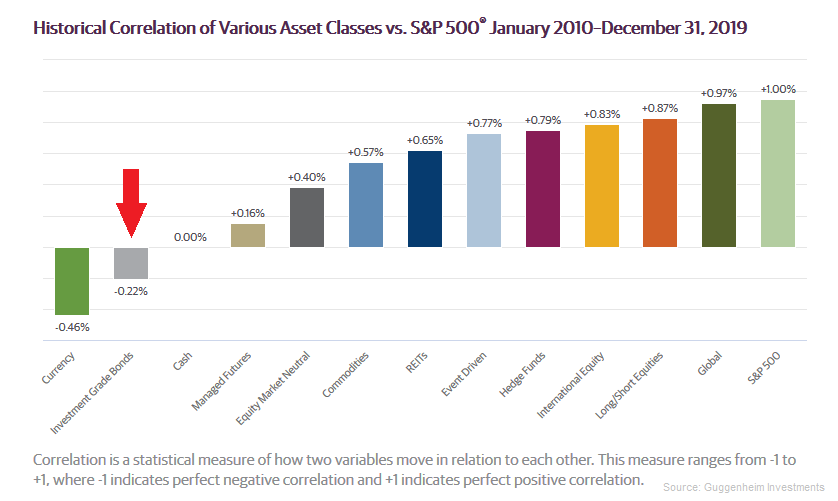 But during the market downturn, we saw U.S. investment grade corporate bonds fall along with U.S. equities. That runs afoul of history, which says bonds should have risen during that time because of the documented inverse relationship between the two asset classes.

Not surprisingly, investors found diversifying a portfolio during that time to be quite difficult.

From March 23, 2020, through August 21, 2020, the S&P 500 surged 53 percent as it recovered from March lows. These eye-catching returns, along with miniscule interest rates, led bond investors to seek more return through riskier fixed-income holdings.

While all the bond categories in the below chart have positive returns, corporate bonds significantly outperformed government and municipal bonds. Again, taking into account the historically negative correlation between corporate bonds and the S&P 500, we normally wouldn’t expect such a huge rebound in the U.S. corporate grade bond sector. 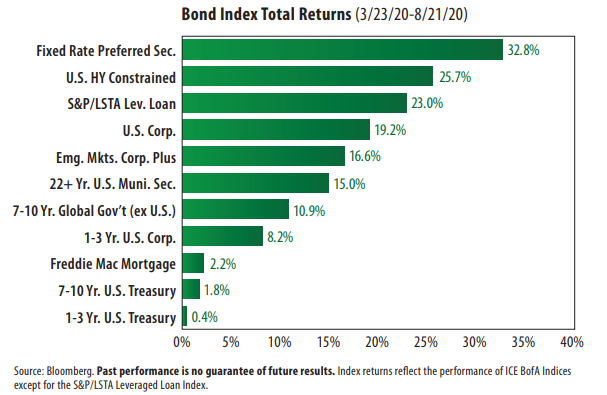 We believe this shows the abnormality of this Black Swan event. It also shows how swift and powerful the Federal Reserve’s response to market stabilization has been during this time period.

The Fed’s purchases of U.S. corporate fixed income for the first time in history created a head-scratcher – equities and fixed income were correlated rather than non-correlated. While the script was flipped, creating unique investing conditions, can you imagine if the Fed didn’t step in?