This is usually the time of year when college basketball takes center stage. The best teams in the nation compete in a championship tournament where one loss means a ticket home – may the best team win. Over the years, the tournament has been known for its surprise results, thus the nickname March Madness.

The tournament has also become synonymous with gambling and a near obsession to expertly pick the “perfect bracket.” 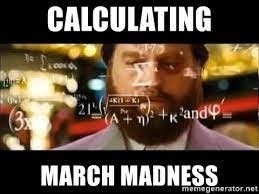 But last year, March Madness was dominated by COVID-19, which knocked college basketball to the sideline. This year, even though the pandemic is still here, March Madness is back. And it’s not just basketball – the madness has reached the market too.

We’ve seen fearful, angry bouts of selling, especially in technology stocks. Then we had euphoric highs with almost reckless buying, oddly also in tech stocks. We then saw flatlining markets with deep turmoil underneath the surface.

In short, a lot has happened, as we’ve tried to cover in our weekly blog posts. Over the last few weeks sentiment has shifted wildly, from frothiness to defensiveness, which can be terribly frustrating and confusing for investors. This is especially true for “gut feel” investors, who trade on sentiment or emotion.

But at Cornerstone, we use data to establish objective viewpoints. Our loyal readers know how, after a brief revival following the “Robinhood bailout,” the trusty MAPSignals’ Big Money Index (BMI) started to fall again in late February, suggesting volatility ahead.

Once again, thedata of the BMI nailed it – late February and early March were bumpy for stocks. Here’s what the past year looks like: 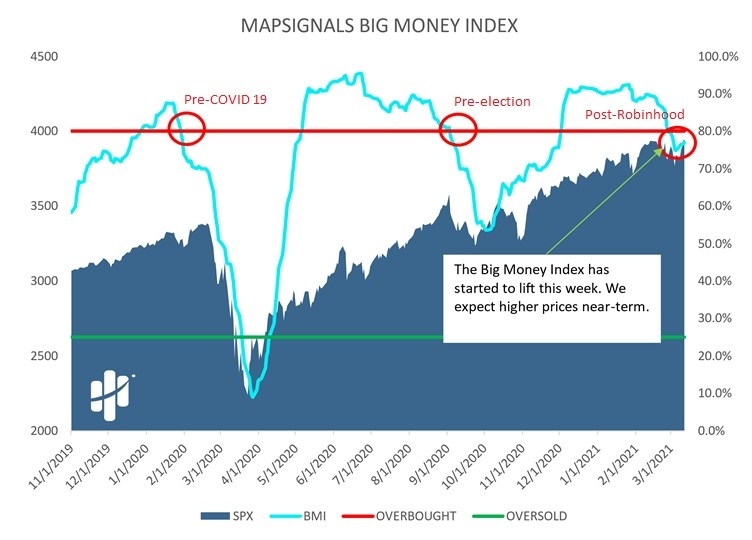 Most recently, sellers pounded growth and tech stocks, but gleefully bought “reopen” stocks like travel, restaurants, financials, and industrials. Then, for a few brief days in early March, investors sold it all and puked out all the stocks of every variety.

Kidding aside, this is the cyclical trade rotation we’ve spoken about in the past. From afar, these may look like market personality changes on a dime. Because once again, we saw crazy buying.

So, is the madness over?

Looking at data, we first need to look for a rising BMI. Sure enough, after bottoming out at 74.8 percent on March 5, it started lifting:

For a rising BMI to keep ascending, buying must continue, meaning stocks must perform. It’s the only way the BMI rises.

Given that, looking back to earlier this month, a BMI turnaround didn’t seem too likely on Monday, March 8, considering all the intense selling. But the past week saw huge buying – 745 buy signals versus 175 sell signals – and eight of 11 sectors were the recipients of huge amounts of capital:

There was monster buying in energy and financials (in financials, specifically banks and insurance).  But even technology saw buying – including during the recent “tech wreck.” This reinforces the market’s madness personality. The flip-flopping has reached mind bending levels recently. So, it doesn’t appear the madness is over yet, at least in terms of volatility and sector swings.

But what about the overall outlook? After looking at all this data, are we back on track?

While it may seem a little unbelievable right now amid all this market madness, our data say yes. Historically we may have expected this sort of recovery in early April, but recent history has shown things can happen quicker now (both up and down).

The actions of recent opportunistic buyers point to a more bullish than bearish narrative. Obviously, we want to find stock deals in this environment. But the increased speed can make it difficult to act as some stocks have quickly recovered, negating any bargain opportunities.

So instead, we're doing a modified dollar cost averaging for accounts with cash on macro-level down days. Otherwise, we remain fully invested in a diversified “barbell” strategy that includes both growth and cyclical sectors.

We take that approach because markets, like basketball tournaments, are volatile, especially intraday or in-game. There are swings and dips. And momentum can play a role in the results.

Understand the selling that’s causing more madness seems to be some level of forced selling (or “flush outs”) prior to the end of the quarter. It wouldn’t surprise to see swings the other way too, because overall, the data have clearly turned to near-term bullish. That’s why it’s called March Madness! 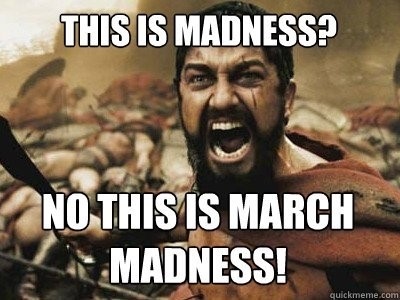