A More Bullish Outlook May Be in Order

With earnings season coming to an end soon, last week we received important datapoints for this quarter in the form of the most recent consumer and producer inflation reports. Readers know that in the beginning of July we stated that we’d need to see more economic data to determine if markets would find support from their most recent test of the lows.

Well, the data has arrived. And thus far, it has supported a more bullish narrative.

First, we saw it in July’s Consumer Price Index (CPI). The CPI is a common inflation gauge that measures prices across a range of items. The latest readings indicate inflation may have peaked, and perhaps even beginning to reverse course: 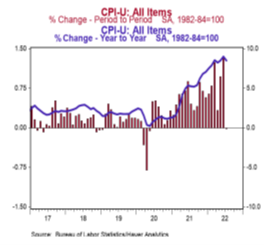 Last Wednesday, the market immediately skyrocketed when the CPI came in below the consensus expected month-over-month increase of 0.02%, showing a CPI up 8.5% in a year. The reason for the excitement was this could be the first indication of inflation truly peaking as this was a decrease from the +9.1% print we saw last month.

To be clear, energy prices dropping 4.6% in a month was the primary reason for the inflation stability. We anticipated this based on recent oil price decreases, and that is coming to fruition:

Now, in normal times, an 8.5% rate of inflation would crush markets. Also, real average hourly earnings increased 0.5% in July, but are still down 3% in the past year, meaning price gains are still outpacing wage gains. This setup doesn’t look great on paper. Nonetheless, the market celebrated a potential peak.

Everything is relative, I suppose!

We’d be remiss, however, if we didn’t point out the risks associated with the housing market – specifically the 8.0% increase in rents over the last three months: 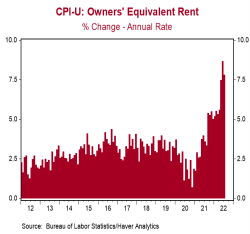 This is important because rents are a key driver for overall inflation since they make up more than 30% of the overall CPI. In the recent past, energy and food drove price gains. It may be housing’s turn now because rents still have a long way to go to catch up to home prices, which skyrocketed during the pandemic. Keep in mind, landlords are still reacting to the rent freezes the government put in place.

We also saw evidence for a more bullish stance in last month’s Producer Price Index (PPI), which measures final-demand wholesale prices, as it fell 0.5% in July. This follows a string of monthly increases dating back to April 2020.

The markets cheered the PPI report too. Economists were expecting an increase of 0.02% from June, so this was greeted as a big win, relatively speaking.

Again, most of the PPI drop came from the decline in energy prices. But as with the CPI, the market reacted extremely positively in hopes that this forward-looking indicator provided more support for the bullish case that we have reached an inflation peak.

Buying Back, Even Among the Beaten

As mentioned above, the market celebrated the inflation numbers and triggered additional bullish buying. Our readers know how “big money” institutional buyers are often ahead of the curve. These buyers were once again, having started buying a few weeks ago. It’s created a clear uptrend in MAPsignals’ trusty Big Money Index (BMI), a 25-day moving average of “big money” investor buying activity: 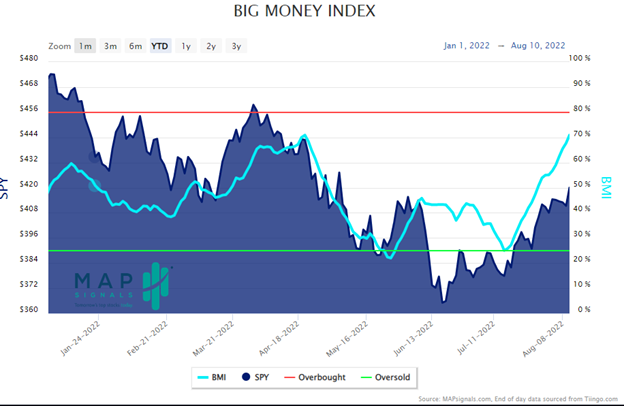 The question becomes, is this a bear squeeze or the beginning of a bull run (perhaps even a short one)? Well, first we'll look once again at our sector rankings, where the buying is spread out among sectors, providing a broader base and thus fuel for a stronger bull narrative:

Six sectors saw outsized buying (highlighted), and two more (financials and real estate) were close to those levels. Plus, in little more than a month, technology moved from the bott

om of the list to the middle of the pack, which bodes well for markets as that is the key growth sector.

Remember, the BMI went oversold on July 14. As of this writing, the SPDR S&P 500 ETF Trust (SPY), an exchange-traded fund that tracks the S&P 500, is up 11.08% since then. Digging deeper, we can see in the below “big money” stock buys and sells that major buying began on July 27 and hasn’t relinquished since. This begins to paint a vivid picture that professional investors are legitimately stepping in to broadly add risk for the first time this year: 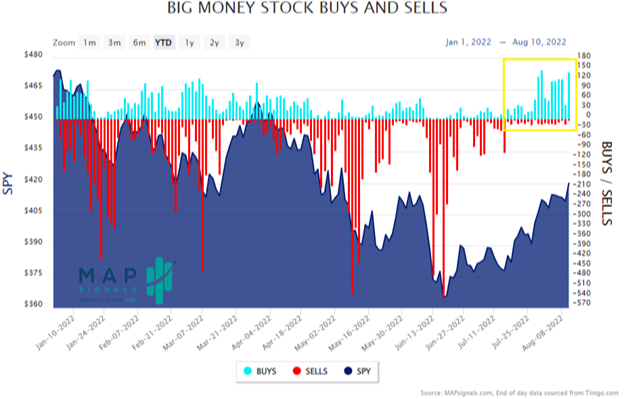 To really understand if this price action is bullish, we think it's important to look at the worst performing sectors so far this year, discretionary and tech. As you can see in the charts below, the BMI reversal has coincided with both of those sectors getting some much-needed love: 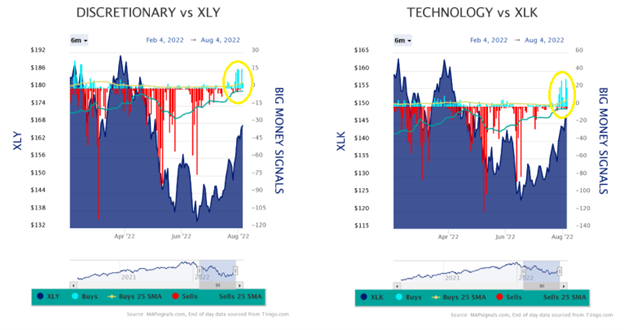 Seeing discretionary and tech receive big inflows gets us excited because they’re the engines of a growth market. This is an example of the power of contrarian signals. We call this type of action a “mean reversion” trade.

A perfect recent example is the discretionary sector, which historically has bottomed out ahead of fundamentals. It is once again proving to be a sector leader out of a bear market, which coincides with history: 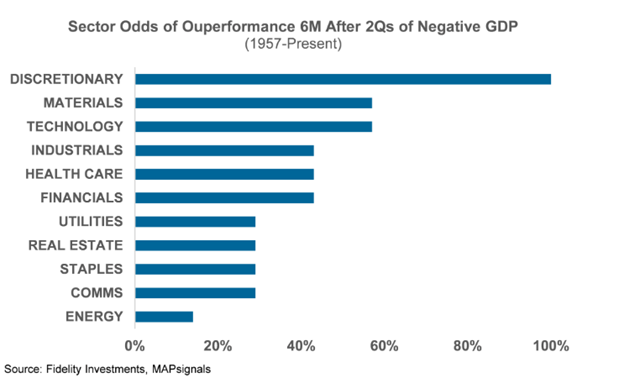 Looking a little further at the distribution of sector buying, since July 27, we can see a much broader allocation of buying, especially within technology, health care, and industrials: 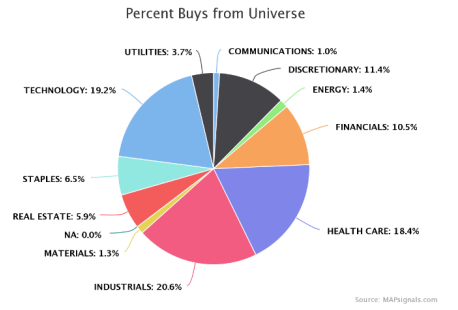 Some media pundits are asking if this is merely a short squeeze, as if that’s a bad thing. We think it is a squeeze at some level, primarily because the market is a forward-thinking machine.

See, when the realization sets in for investors that perhaps it's not as bad as everyone thinks, the case for those shorts dwindles. At that point, they need to cover their positions. And that’s when you see risk being added into portfolios, like we are now.

Of course, the momentum we’re seeing produces questions. When will the BMI flip to overbought? Should we be concerned about how quickly it has risen from oversold?

Clearly the money flows flipped swiftly and has reinforced the old adage “time in the market beats timing the market”. If you’re fully invested (as we have been), you’ve likely gained with the markets’ rise. If not, this is another lesson in staying the course, even in tough times.

But does that mean the opportunity is gone? Is overbought territory inevitable?

Thankfully, our friends at MAPsignals did the heavy lifting for us and calculated how long it took, on average, for an oversold market to become overbought. In the chart below, you can see how many days and months it took for each oversold period to flip to overbought, along with the return of the S&P 500 through those periods: 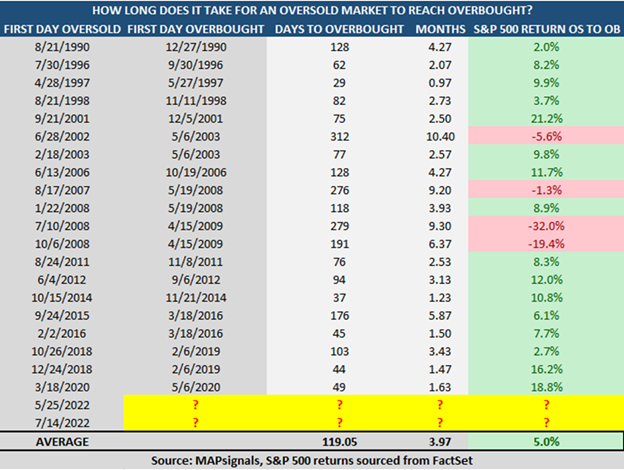 In summary, it takes about four months for the market to become overbought, on average. We found it interesting that in half of the oversold instances, the time to overbought was less than three months.

Once again, the lesson is to avoid being too bearish for too long. On a side note, we at Cornerstone find some comfort in the fact that both the BMI and the market are beginning to normalize and behave in line with history again.