We May Be Seeing Signs of Lifting Uncertainty

Last week we talked about the macro-level outlook for markets and the economy, focusing on how important this earnings season would prove to be. Now we'll dig a bit deeper to explain today's markets and what to expect for the rest of 2022.

We saw some good news from PepsiCo, Inc. (PEP)*, which significantly beat analyst earnings estimates and provided increased revenue guidance for the rest of the year. This supports the company’s stock and confirms our belief in the importance of forward-looking guidance for certainty.

Now, there was bad news last week too. Inflation hit another historical high as the Consumer Price Index or CPI, a common inflation gauge, rose to 9.1%. The Euro also weakened, which hurts Europe’s overall economic outlook. But remember CPI data is backwards looking. As we sit here today, there may be glimmers of hope emerging in inflation data going forward.

As we wait in this “fog of war,” we know nothing is certain, be it inflation, war, or potential recession. So, investors likely won't pounce in full force until there’s more clarity later in the year (i.e.-Q4).

This uncertainty is reflected in our trusty Big Money Index, a 25-day moving average from MAPsignals that follows “big money” investor activity. As of the writing of this, it has dipped to 25%, right at the oversold mark: 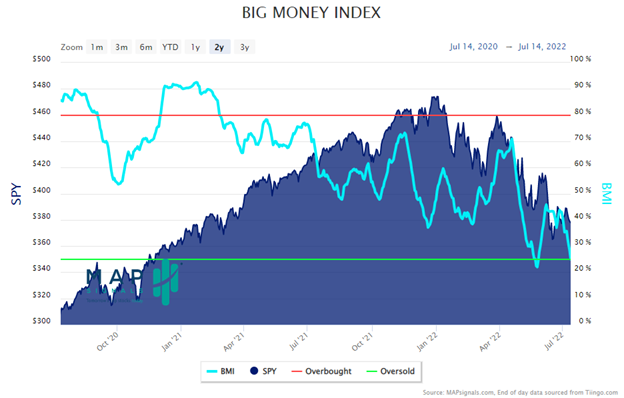 We must reiterate though that the BMI’s future path could be heavily affected by this earnings season. The market wants clarity, but it’s not there yet.

This uncertainty is further exemplified in rather muted “big money” movements, although selling did outweigh buying last week, 228 to 103: 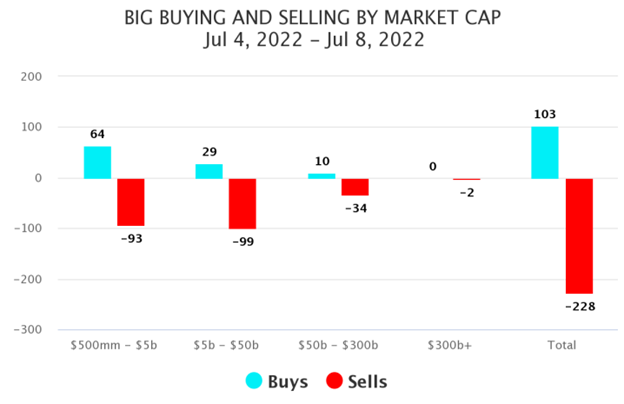 But while the BMI dropped, sector activity was rather balanced. Energy and materials saw some reversion to the mean, but otherwise, activity was mostly subdued:

Another piece of evidence of the lack of activity was the zero buying (literally) in exchange traded funds (ETFs): 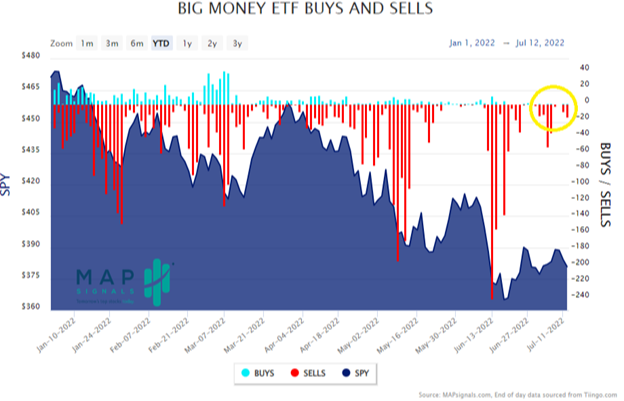 Digging a bit more into recent trading sessions, they've been oddly consistent.  Most days seem to open weak then lift throughout the day. This suggests intraday volatility driven by algorithms and low volume. It appears us that Europe is selling in pre-market and morning trading. When European markets close, algorithms start buying throughout the day.

We believe this signals Europe’s economy being in significantly worse condition than the U.S., especially as the Euro continues to weaken. It’s caused pressure that's translated to European investors selling U.S. equities. This action is causing markets and the BMI to chop along sideways. It’s clear we need a catalyst of some type to ignite significant buying, and thus the market.

Still, there are silver linings.

For instance, the Institute for Supply Management, a supply management trade organization, issued numbers last week that were better than expected for the first time since February. That could speak to better manufacturing conditions ahead.

And while the June inflation number was extremely high, we’ve seen commodity prices and other leading indicators begin to drop significantly since. That should lead to better inflation numbers in July and going forward.

Lastly, June job numbers were strong once again, with 327,000 jobs added while unemployment held steady at 3.6%. Most interesting though is that the labor market continues to approach pre-pandemic levels of total nonfarm employees: 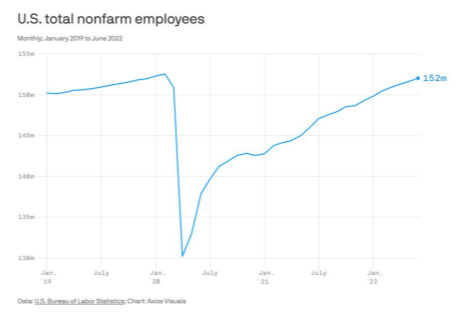 If we were going into a deep recession, we’d be seeing significant drops in job numbers. But we aren’t, and that’s causing uncertainty among investors as they weigh the data against the recession narrative.

Turning back to the peak inflation theory quickly, we've recently seen energy peak in the near term as oil fell from $120 a barrel to $95. That created a near-term downtrend: 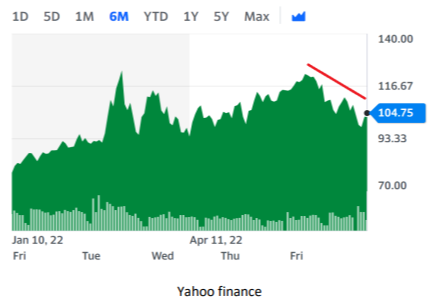 This should start to translate to some relief at the gas pump. Additionally, a recent slowing in demand for gas indicates there is demand destruction occurring. A change in technsicals for the energy sector, which up until mid-June was the lone shining star in the S&P 500, concurs with that assessment. Despite no change in fundamentals and consistent expectations of a stellar earnings season, the energy sector has dropped recently: 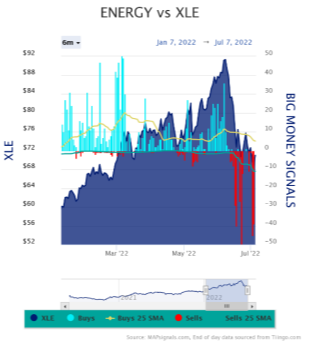 Where did the capital go? Significant recent buying in health care provides the answer: 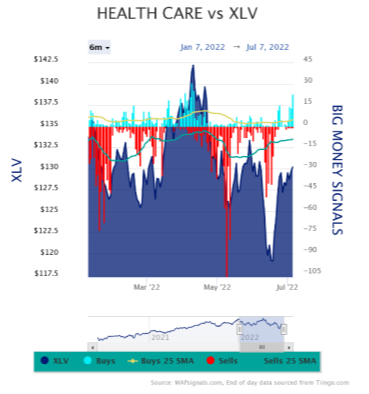 This supported our internal analysis going into the quarter that health care would become the safe haven of choice for investors during this near-term uncertainty. In fact, we significantly raised our health care exposure across all model portfolios earlier this year.

To summarize, even as painful as this market has been, it mirrors closely to what we've been discussing since January about the Federal Reserve’s “ghost tightening.” We expect two more interest rate hikes of 50-75 basis points in both July and September. Then the Fed will likely pause and do nothing in November, which is an election month.

Between now and then we believe there will be significant indications of slowing inflation. That lines up with the possibility of uncertainty lifting as we near the fourth quarter, even if there is a mild, technically-defined recession by that point.

One last thing to keep in mind is that we're in the middle of summer, which means traders are on vacation and volumes are thin. That leaves room for algorithms to play games, creating more volatility. Understanding this makes the swings easier to stomach.