Earnings Will Decide Which Path We Take

This time of year, there is a typical slowing of the news and data streams. So, we want to take a step back and highlight what we’re looking for as earnings season unfolds once again.

We’re just past the halfway point of the year and new earnings data will usher in fresh price targets from analysts and updated forward guidance from companies. These updated assessments will inform our strategies and positions for the second half of the year. But due to a lack of sector leadership and loads of uncertainty around inflation and the economy, it’s difficult to gauge which way markets are headed.

That means we’re essentially at a fork in the road. Which way will we go? It’s unclear quite yet, but we’re confident earnings will decide which path we take.

As we all know, the first half of 2022 has seen several trends that dominated the past couple of decades reverse course. Value stocks finally made a comeback. Inflation broke aggressively upwards. We were reminded stocks can, in fact, go down. And we saw a sector on the decline – energy – make a huge comeback.

In this post, we want to focus on stock valuations (or the prices of stocks) and how earnings affect them.

To review, valuations are made up of two components – fundamentals and sentimentals. For a stock, fundamental times sentimental equals the price.

But earnings forecasts become even more important in times of turmoil, which we are smack in the middle of currently. That's why we believe this upcoming earnings season will be hugely important.

The sentimental component of stock prices at its core is how stocks are pricing future growth. In other words, how do investors feel about them? This is primarily made up of two parts. First is the story the company can tell, especially its future guidance during earnings calls. The second is the global macroeconomic environment.

When it comes to the latter, one of the most important factors in a lot of economic models is the concept of expectation. That’s because rational human beings shift their consumption behavior around what they think the future will hold. Since the economy is a compilation of individual demand and supply curves, expectations drive a lot of underlying pricing behaviors, and thus sentimentals.

From a fundamental standpoint, what we've seen in the first half of the year is what we call multiple compression. To help explain, understand that investors use price multiples for valuation analysis. For instance, a stock’s price-to-earnings (P/E) ratio is a multiple. Sometimes multiples can divert from norms (compress) for odd reasons, which can indicate a change in expectations, even though the company remains strong by other fundamental measures.

Over the course of extremely loose monetary policy, we saw a lot of excess capital flow into equities. When you follow the flow of funds, more capital in the system usually leads to a generally elevated level of multiples (it did over the course of the past few years and more).

But this year we've seen almost a reversion to the mean. Looking back at previous time periods from both a pure multiples level perspective as well as a percentage in multiples contraction, you can see that the recent multiple contraction is very much in line with past historical declines: 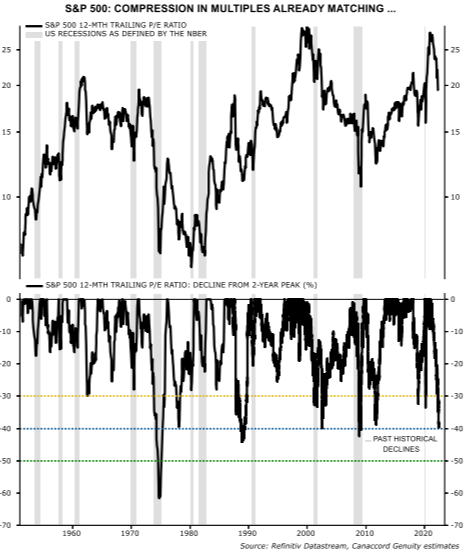 This really has been the market blowing off a lot of the fiscal stimulus hangover from an elevated money supply that was pumped into the market. As such, it appears much of this multiple compression was flushed out in the first half of the year. So going into the second half, we must keep a keen eye on earnings.

That’s why this earnings season is a fork in the road for the near term. Some people think it will disappoint and lead to more losses. Others are more bullish. The tricky thing is, there are true heavyweights on both sides – some say more pain, while others do not see earnings compression.

Thus, we will be paying close attention to earnings season to determine if earnings estimate revisions move downwards. The reason this will be a critical component for the second half is that when you look at the multiples if the denominator (i.e., earnings) are coming down, the multiples will then come back up, meaning the current levels are artificially low.

For example, if a stock is priced at $100 and has $20 of total earnings per share in the next 12 months, the P/E ratio is 100/20, which equals 5x. However, if this particular stock is hit by a potential looming recession and real forward earnings are actually closer to $10 per share, that means the P/E ratio will now rerate to 10x (100/10), thus potentially needing additional multiple compression going forward.

Swings like this can influence investor behavior, especially when considered in the context of P/E ratios over time. And if there is a revision of earnings over the next few weeks across the board, that would mean multiples are still too high.

As we can see in the below chart, we have yet to really experience a downturn in earnings revisions, as shown by the solid black line: 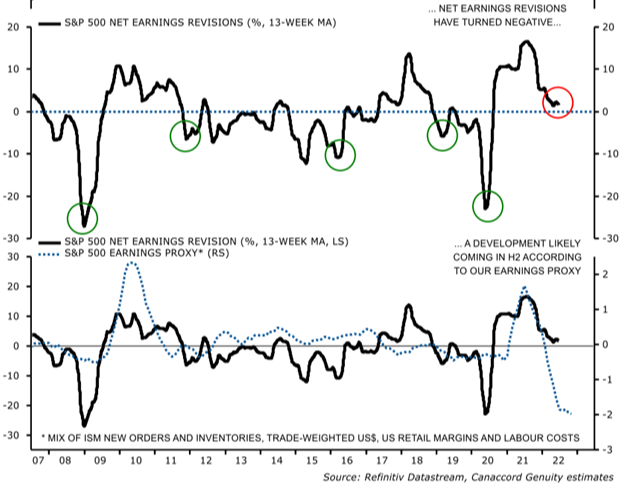 This is why we believe this earnings season is one of the most important in recent history. It will determine if the first half multiple compression was enough of a correction to be in line with the fundamental earnings expectations going forward this year.

Which brings it all back to prices and expectations. We’re at a fork in the road. Earnings will be telling.