Grab some water. This post may be a bit dry for some. But it covers one of the most pressing topics today – inflation.

Last week all eyes were on the results of the Federal Reserve meeting to see how much the central bank would raise short-term interest rates. The Fed ended up raising rates by 75 basis points and indicated more increases are to come.

After the Fed meeting in May, Chairman Jerome Powell made it very clear that Fed policy would likely include raising rates by 50 basis points at each of the next two meetings. When asked about the potential for a larger rate hike, Powell was immediately dismissive.

But two Fridays ago, a nasty consumer price index (CPI) report showed prices to be rising still. The futures markets then immediately began pricing in interest rate hikes of at least 50 basis points last week and in July. That led to an immediate drawdown in the market on Friday, June 10, and the following Monday, June 13, which looked to be algorithmic or computer-driven headline grabbing.

Now, readers of this blog know we would fully support a rate hike of 100 basis points or more. We've been calling for bigger rate hikes going back to March of this year and even argued the Fed should have started tightening in June 2021. Our reasoning for this became clear a couple Fridays ago as, once again, the data has shown that inflation is not “transitory”.

The 12-month CPI increase came in at a 40-year high of 8.6%. Obviously, this inflation is not being helped by geopolitical issues in Europe, nor by China, which is just now beginning to reopen from strict COVID-19 lockdowns. The nation hasn’t been a big consumer like usual for months. As it buys again, there will be more pressure on inflation, as this activity affects supply and demand.

Peeling back the data, we also found it most shocking how much housing rents accelerated in May, rising 0.6% month-over-month: 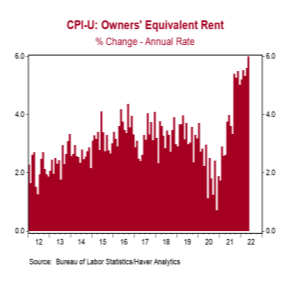 But as most anyone other than the Fed seems to know, this is self-inflicted pain due to the M2 measure of money supply that soared during the pandemic. Now consumers are paying the price in the form of much higher inflation. And the truth is, unless the Fed gets growth in the money supply under control, nasty inflation will continue.

Now we know Chairman Powell, at his own peril, puts a great deal of weight on gradualism and signaling, rather than just focusing on getting monetary policy where it needs to be. But we think the data forced him to go above the 50 basis points for the latest hike.

Turning our attention to producer price index (PPI), which shows how much producers of goods pay for their inputs and is a leading indicator for inflation, it changed our opinion on whether Chairman Powell would veer from his gradualism approach. Last week’s PPI data showed a rise of 0.8% in May, which is an increase of 10.8% versus a year ago:

Now to be clear, this is a modest improvement from the 10.9% reading in April and 11.5% in March. But almost immediately following the PPI data release, there was a “leak” to the Wall Street Journal about how the Fed was reconsidering a faster pace of rate hikes. In our opinion, this was a major and intentional leak by the Fed chairman.

We view the PPI as a leading indicator. See the sharp dip in the far right of the graph below? We're hoping that few months of data is the indication of all of this peaking and that it flows to the CPI. 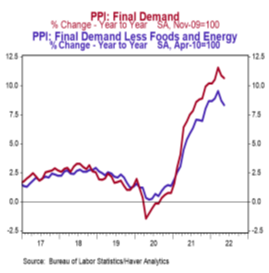 Chairman Powell said he anticipates more rate hikes in July and beyond. The size of those increases will be important because we believe he probably regrets being so dismissive about more aggressive rate hikes back in May.

Either way, we want to point out one other datapoint that is glossed over all too much in our opinion – the monthly figures and measures of the M2 money supply. That data will be released at noon on June 28, 2022. In this current economic environment, that news should be at least as important as what the Fed does with interest rates. This is because as inflation continues to run high, we believe it is a direct result of what happens when the money supply artificially grows leaps and bounds faster than output. Therefore, the money supply determines the pace of inflation.

Because we have no historical precedent of this type of Fed, we don't really know if raising rates yet will keep M2 growth in check. So, we think it is important the Fed focuses on controlling both rates and the money supply. In other words, dust off your Milton Friedman books. The lessons from this old sage are coming in handy in today's environment.

How Does This Apply to the Real World?

American consumers are being stretched thin at seemingly every turn of the economic well. Whether it's good or services, seemingly everything costs more. To put this in the perspective, more than 60% of U.S. consumers live paycheck-to-paycheck, with spending roughly equaling savings on a monthly basis (i.e., money in less money out equals disposable income).

As you can see in the chart below, the personal savings rate is a proxy for the money supply: 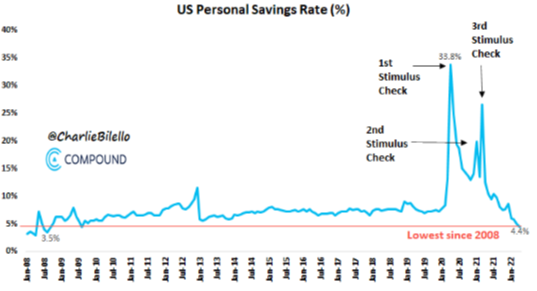 The aggressive spikes can be explained because when you think of an individual's cash flow profile on a monthly or quarterly basis relative to the amount of the stimulus checks, it’s clear the aid far exceeded the typical savings contribution. Now we're seeing a drastic normalization.

The question is, where is this money going? This is important because as a consumer-driven economy, we rely on these households to supercharge the velocity of money, or how many times a single dollar is used to purchase goods and services.

So, is this money going to pay down debt? Or are we seeing an inflation squeeze?

If you remember, in the first round of stimulus, we saw headlines about consumers using those checks to pay down credit. But today, we're seeing a reversion of that anomaly: 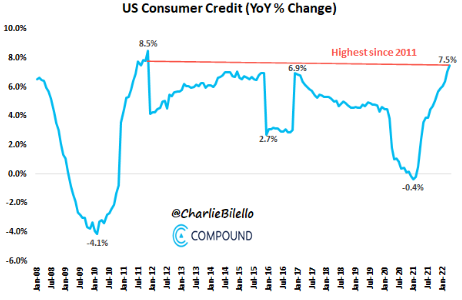 These are the cracks in the consumer economy that give us the most worry as a result of inflation and the Fed being behind the eight ball. The institution’s credibility is waning in the current environment.

What does this mean for markets?

There was an immediate pause in MAPsignals’ trusty Big Money Index (BMI), which measures “big money” investor activity. The BMI was rising fast, but as this as uncertainty popped up again a little over a week ago, it levelled off: 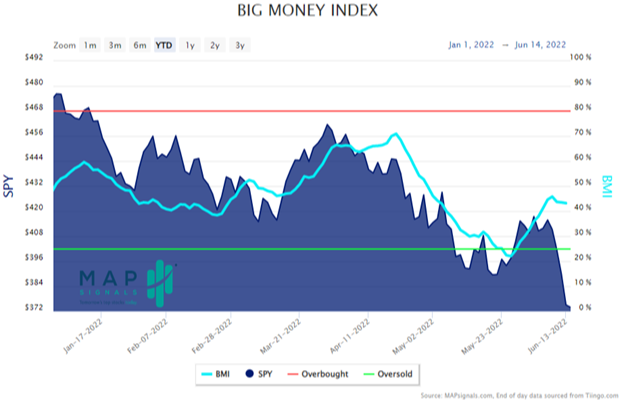 This was a direct result of the headline CPI news a couple Fridays ago. What followed was an fast and aggressive selloff (see the far right in the chart below) that can only be attributed to algorithms or computer programs, due to the speed: 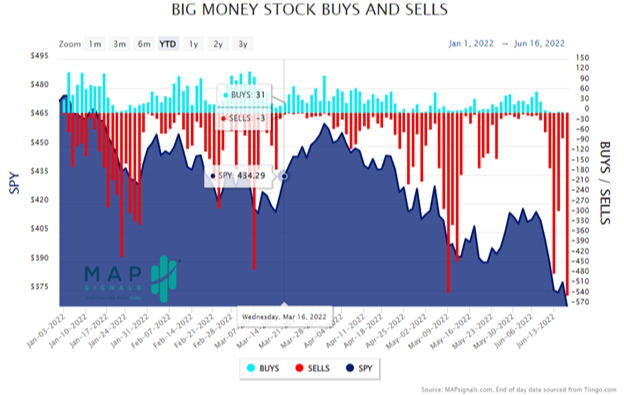 As more data comes in, we'll need to figure out if this is the beginning of a longer-term downturn or a bump in the road along the way to more stability. But there are clues available in real-life examples.

The real culprits for ruining the party are the volatile food and energy costs we’re experiencing.

Looking at this from an average household standpoint, note that the average American worker spends 27.6 minutes per day driving one way to work, or about 14,263 miles a year. And gas prices are at nearly 30-year highs of $4.50 a gallon (while crude oil is roughly $100 per barrel, refined oil is about $250 per barrel and that’s what we use to drive).

Per the Environmental Protection Agency, the average American vehicle gets fuel economy of 25.4 miles per gallon (which seems high to me). Thus, the average cost to fill up a vehicle is about $2,750 per year.

Moving our focus to food, the cost to feed the average American household per the U.S. Bureau of Labor Statistics is about $10,345 a year. To eat and drive in the U.S., there’s a cost of about $13,000 annually.

So, after just food and gas, we're now at nearly 20% of net income being spent. When you add in the average housing cost of $1,437 per month, it’s about 44% of net income. These are just averages, but right now we’re talking about nearly half of American income being used to just to eat, have a place to live, and drive (presumably mostly to work).

Consumers are being squeezed hard. The American wallet is under pressure.

Bringing this back to the Fed, we've already mentioned how we think M2 money supply is the most important controllable factor. But this is especially so because even if we get the 150-basis-point rise in rates over the next two to three meetings, it will just bring us back to the pre COVID-19 2019 rate of 2.25%.

That is not a recipe for economic disaster from an interest rate perspective. But we truly hope the Fed continues to take inflation seriously and get it under control.