Markets are cyclical. At any given point in time, we’re somewhere on the spectrum between full growth and full capital retreat. And when markets are bearish, investors are always wondering where the bottom may lie.

When selling begets more selling, it may be the capitulation stage. That’s when investors essentially toss in the towel after being beaten up badly. But sometimes it’s tough to tell where we are. This is the reason so many money managers study history and psychology just as much as they do accounting.

See, the stock market is nothing more than a collection of aggregated buyers and sellers reaching a price equilibrium. Understanding where that equilibrium is going is just as much a study in the human psyche as it is in financial statements. A visual example that we love is this chart: 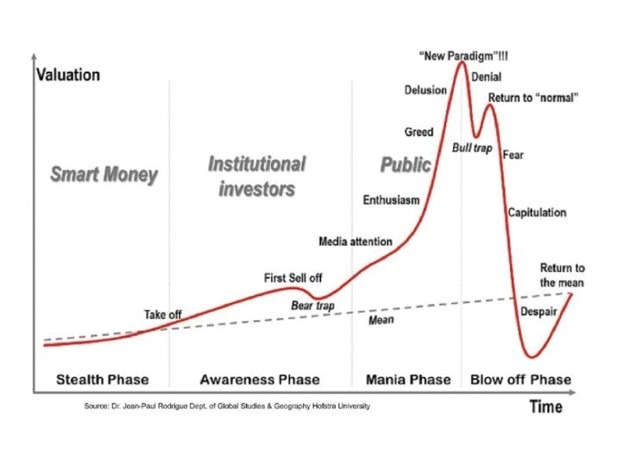 For us, the main takeaway from this chart is that human beings and stock markets tend to overshoot in either direction with a rubber band effect around the long-term average. The reason we find this chart important for today's post is that we believe we're currently in the capitulation stage.

It’s most likely that we’re at or near the end of the downward trajectory of this phase, as we've seen multiple compressions to a high degree and at the same time not seen earnings forecasts adjusted aggressively downward by analysts yet (more on that later).

The underlying reason for the capitulation stage is that uncertainty continues to weigh on markets. The best measure of America’s uncertainty-driven fear is the University of Michigan Consumer Sentiment Index. The preliminary estimate for June plunged to a record low of 50.2, that's down from 58.4 in May.

But there is good news from this bad news.

Contrarian Theory says that when sentiment reaches such historic lows, the only way it can go is up. Capitulation usually comes when sentiment is lowest, and that makes record low consumer confidence like this a positive indicator.

Looking at the chart below, you can see the previous lows came at the end of long bear markets around 1980, 1990, and 2010. This is history as a guide from a contrarian standpoint. 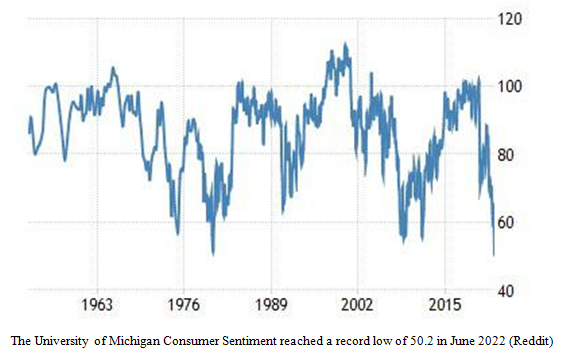 Touching on uncertainty, we even saw back-to-back days of euphoria and despair two weeks ago. Markets jumped over the Federal Reserve’s 75-basis-point rate hike, only to quickly go the opposite way the next day when the Swiss National Bank and other central banks raised rates unexpectedly overnight. Investors don’t like surprises.

But this is the nature of capitulation. Markets go back and forth until the selling exhausts at some point, like a “throwing in of the towel”.

Another encouraging development occurred just over a week ago. Friday, June 17, was the quadruple options expiration date, otherwise known as quadruple witching, which we’ve covered before. Typically, when markets aren’t already exhausted, quad expiration dates cause markets to crater. This time around, nothing big happened, which is good.

More positives came from evidence last week of numerous hard and soft commodity prices beginning to decline. We mentioned this last week regarding the Producer Price Index dropping. It’s a leading indicator and could point to lower overall inflation ahead.

These are beginning indicators that the market is finally experiencing some seller exhaustion, though we will almost certainly see more short term ups and downs before the quarter ends. The S&P 500 is now trading at a forward price-to-earnings ratio of about 15x, which is very attractive.

The index has also been quickly approaching the crucial 200-day moving average mark. As it dips, it’s likely to invite strong bids to hold the line (the index bounced off those same marks at the end of May): 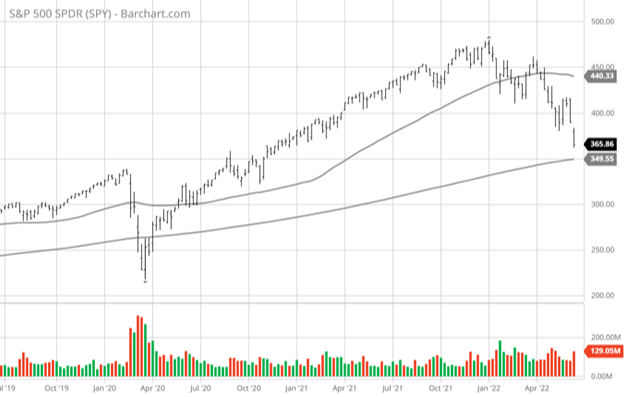 Similarly, the NASDAQ 100 is close to testing this key 200-day average as well, just like it successfully did back in March 2020: 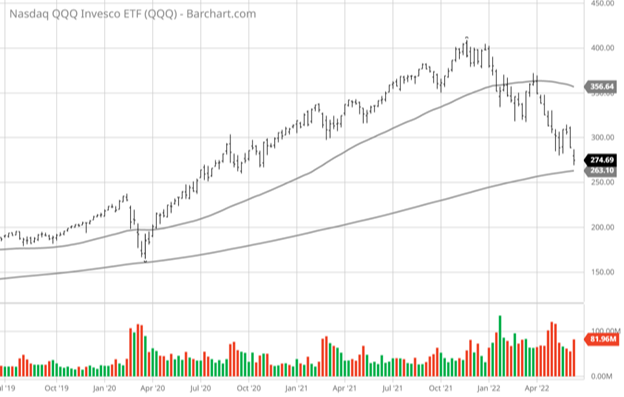 As the first half of the year ends, the market will begin to turn its attention to the earnings “warning watch.” We would think that the next two or three weeks will likely see the market witness a lot of chop and lateral movement as we flush out the capitulation stage. In other words, the market will probably hang onto every released datapoint, seeking catalysts for growth.

Additionally, it's important to remember that over time individual stocks tend to bottom out three to six months before the major averages do. And there are currently multiple cases of leading stocks that corrected downwards to the tune of 40-50%, even as the S&P 500 macro market has dropped only half as much at the lows, approximately 23%.

Obviously, the current economic landscape is highly fluid. Any economic predictions at this point in our view are purely speculative. But what does seem clear to us is that the next 30 days will provide immense insight as to whether the market has endured enough pain. Can it hold the long-term uptrend and regain investor confidence in the process? Time will tell.

When Negatives are Bullish

To further reinforce this capitulation stage, we saw massive selling two weeks ago. You can see in this chart from our friends at MAPsignals, which tracks “big money” investor activity, there was hardly any buying and tons of selling: 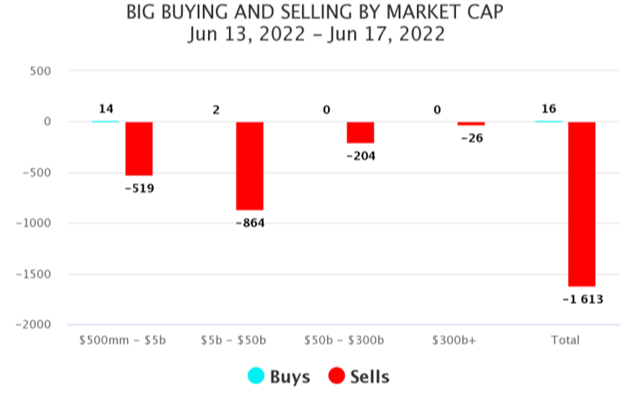 It kept MAPsignals’ Big Money Index (BMI) relatively flat. That’s because it’s a 25-day moving average. And while the recent selling was huge, it’s simply replacing huge selling from five weeks prior in the moving average (when we first bounced off the lows). Look how the big selling was similar: 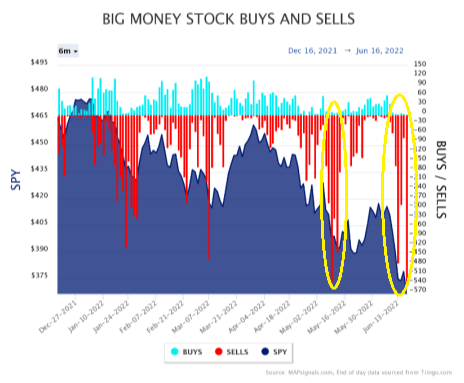 This reinforces our current theory that this is a retest of those end of May lows. It feels bad, but we're just we're just retesting lows. This is capitulation in a nutshell.

Remember, as we mentioned above, the BMI went oversold May 24, 2022, and like clockwork the S&P 500 rallied 9.8% as buying snuck back into the system. Then everything changed (e.g., the Swiss rate increase) and now we're retesting. As “bad” economic data kept coming, selling increased.

The silver lining is that due to this capitulation, stocks are getting ridiculously oversold.

Up until now, the selling has been rotational – technology was sold and energy was bought, and vice versa. It’s the “washing machine” nature we’ve discussed previously. But that changed recently, and everything was sold, regardless of sector.

That is investors throwing in the towel. Everything is sold in concert in a big way. It’s something that “technical analysts” have been screaming about needing to take place since mid-March.

You can also see this in extreme selling in exchange traded funds (ETFs). Monday, June 13, saw the biggest selling day of ETFs ever (more than March 2020 or during the Financial Crisis in 2008). Those extreme levels are another clear indication of capitulation, which may sound like a bad word from a market cycle standpoint, but is actually a historically strong contrarian indicator.

Some may say that this time it’s different though, right?

Well, going back to the beginning of this post, there’s a reason so many money managers study history and psychology. While it's true that there's much uncertainty over future macro conditions, if you don't let emotions control your thinking, there are slivers of light at the end of the tunnel, especially from an historical standpoint.

Our friends at MAPsignals did the heavy lifting looking at other instances since 1990 where ETFs were sold at these extreme levels. As you can in this table, forward returns are historically fantastic: 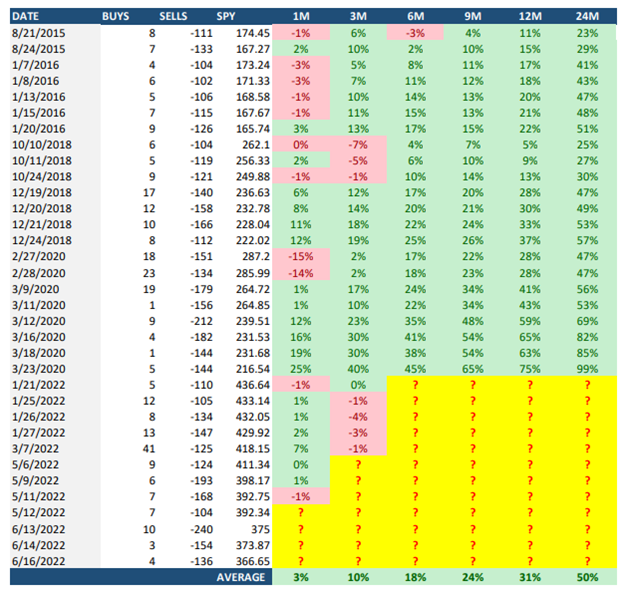 Naturally, these are difficult times. But the market now has a firmer footing to build a base upon, especially as we're already through the speculative asset bubbles being popped that paved the way for margin debt balloons to be deflated.

Additionally, as we are about to enter earnings season, another sliver of optimism comes from the famous economist Ed Yardeni and his research team, which recently released a positive report. In the midst of all this fear, earnings analysts still have not cut earnings estimates and the S&P 500 consensus revenue estimates for 2022 and 2023 are still at record highs. The same holds true for earnings forecasts in 2022 and 2023. Plus, the forward profit margin expectations rose to a record high last week and the S&P 500 large cap forward price-to-earnings ratio is appealing, per Yardeni’s research:

Yes, the boogeyman is here. But we're still looking for positives. If you’re a contrarian, there are plenty.

For instance, capitulation is here. Consumer confidence is the lowest in decades. ETF selling is off the charts. Plus, all sectors are getting smoked. But believe it or not, these short-term negatives are bullish signs for long-term investors, especially those focused on value.

Now let’s end with a positive. As you can see in the chart below, S&P 500 companies are flush with cash and are returning it to investors in the form of dividends and stock repurchases: 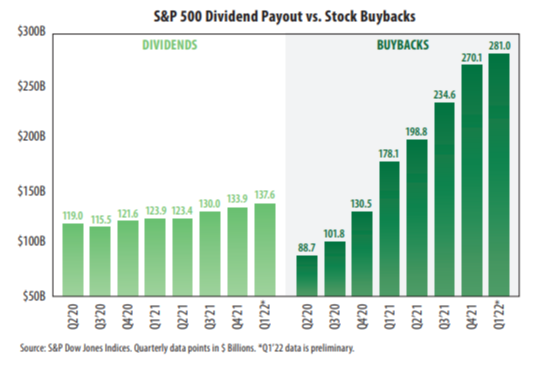 The first quarter of this year saw record dividend payouts and stock buybacks. The S&P 500 cash holdings still total $1.7 trillion as of the end of March even after that return of shareholder capital. That’s equal to what they had before COVID-19.

So, a few negatives and one positive point the way to a potentially bullish future. Yes, it doesn’t feel great right now. But there are contrarian signs of prosperity popping up during this retreat.