Last Monday markets saw red. There was a significant daily pullback in the big indexes, creating a media storm. But readers should have been prepared, as we’ve discussed the possibility of September volatility as well as the potential for an inevitable quick pullback.

While the big indexes finally pulled back last week, we do like how quality stocks are being bought at a more significant level under the surface. Additionally, volumes are starting to pick up exponentially, especially early last week due to the quadruple witching that took place on Friday, Sept. 17.

What could these big index movements be hiding from investors underneath the surface? Well last week we talked about conflicting data. We’re discussing conflicts again today; however, it’s now surface vs. underlying market activity.

To put this into perspective, let's look back on the year for a little bit. On the surface, say that’s the performance of the S&P 500, things seem to be chugging along for most of the year. But there were underlying issues (we’ve pointed some out).

Keep in mind that the S&P 500 Index is a cap-weighted index. In other words, each stock included in the index is not included equally. The big ones, based on market capitalization or market cap, have more representation in the index than those with smaller market caps.

This why the BMI periodically might seem to have a disconnect from the larger indexes. We know the BMI has been sagging or sideways since February. But if the top five stocks in the S&P 500 are getting capital, which has been the case this year, then they’ll prop up the entire index (as the chart below shows), even if the other 495 stocks are essentially being sold off. 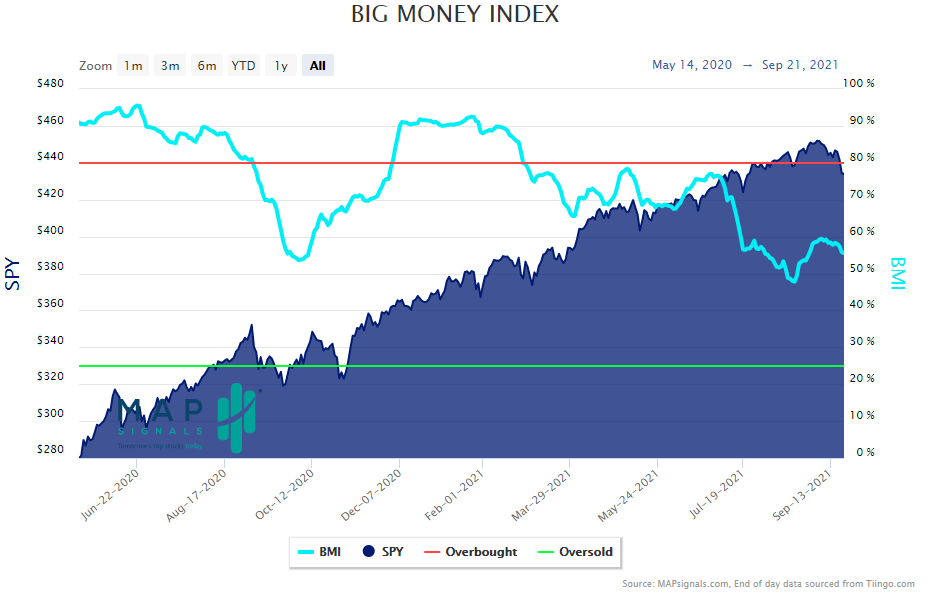 In contrast, if you look at the Russell 2000, the BMI this year has had a much closer correlation. That explains the stunning difference, as we've seen the tug of war and cyclical nature of the buying and selling underneath the surface that’s taken place outside of those big five stocks.

To further illustrate this tug-of-war nature, if we look at the institutional investor exchange traded funds (ETFs) buy and sell chart along with the stock buy and sell chart below, you can see almost equal rotation going back even to February 2021: 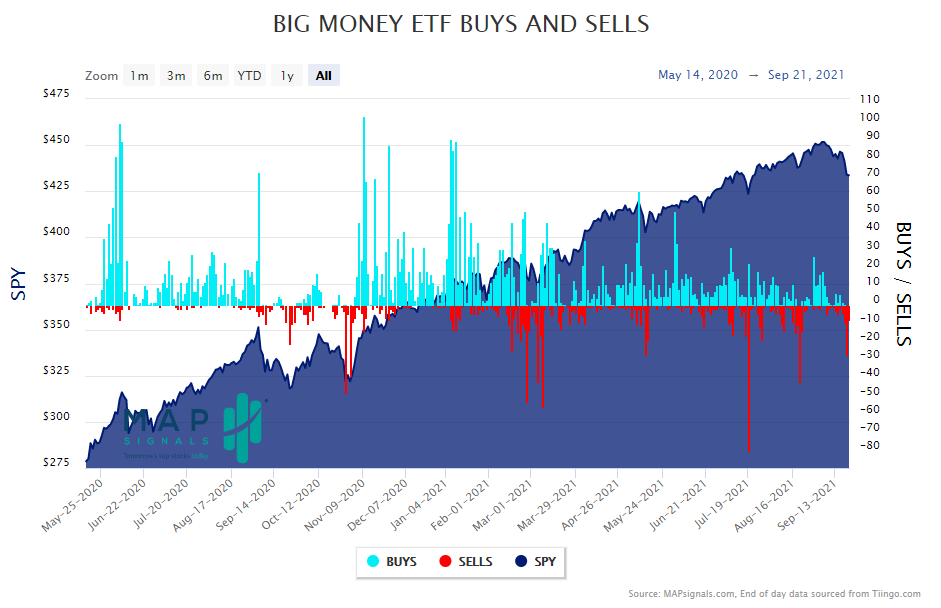 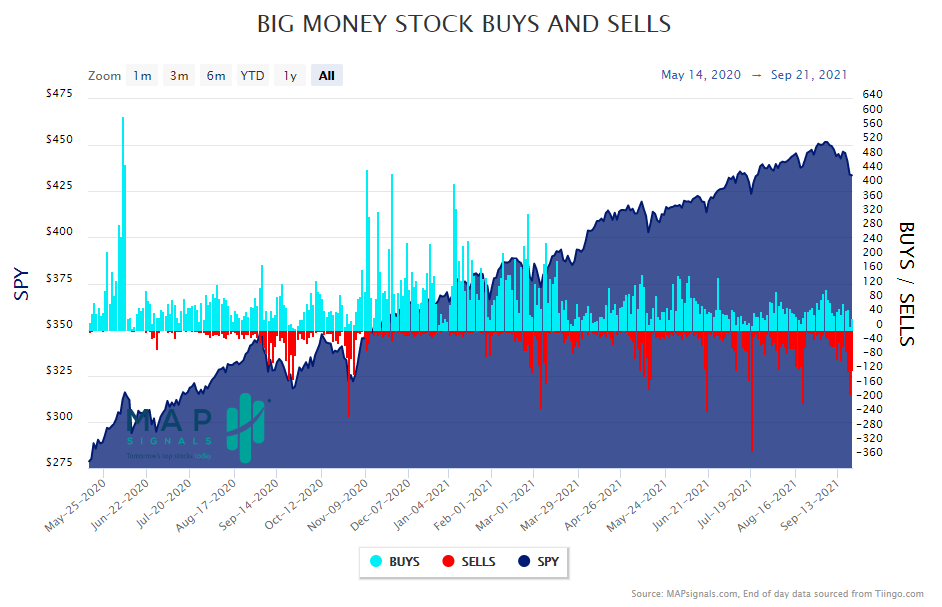 Since February, the buying and selling has mostly been sideways. Rotations have become commonplace. For example, technology will be up, then it will track down. Growth is up, then growth is down. Value’s up, and then value’s down. For many investors, it’s been frustrating at points this year.

But bringing our focus back to the present, in the last week to 10 days, we’ve seen significant increases in volume, with most of that taking place on Friday, Sept. 17. Within the past week, of the 669 “big money” signals, Sept. 17 alone accounted for 27% of them, or 183.

This means that, because of the quad witching, the balance of buying and selling teetered off course. It created a vacuum of selling which showed up in the markets last Monday.

Just to be clear, this is not abnormal and can typically be written off as an outlier. As you can see in the “big money” trading activity chart below, any time we have a quad witching day, we also have monster volumes: 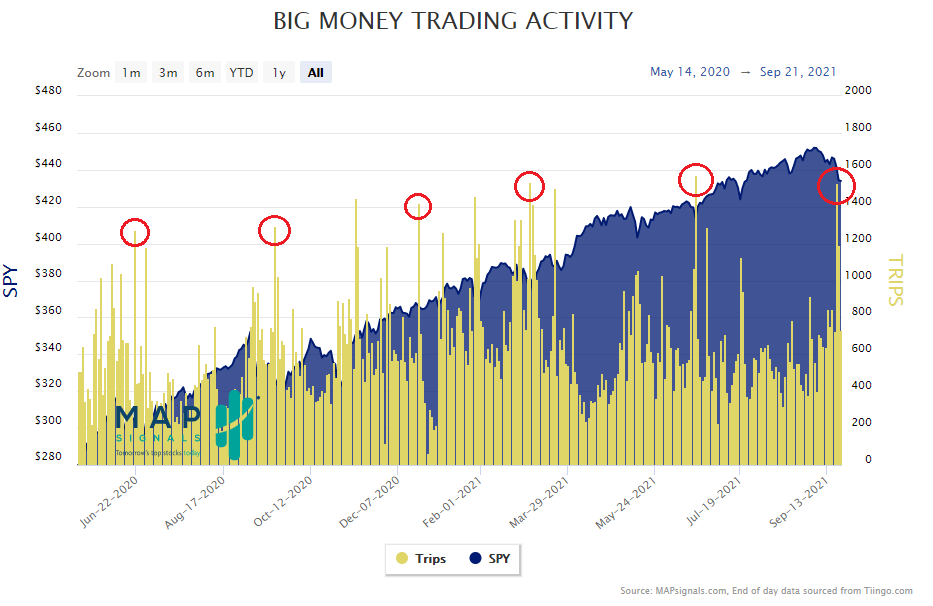 That said, as we look under the surface and move past this outlier volatility, we're seeing an uptick in buying, specifically of quality. Whether that continues, we'll have to wait and see. But based on that data, now is a great time to focus on the quality that is being bought up under the surface as we continue to set up a base moving into the fourth quarter.

The news stories may cause concern, but keep in mind how fear sells, and the media is in the business of clicks and eyeballs. Headlines call for impending doom, the beginning of the end we all knew was coming, and so on. The data tell a different story, which is often the case.

Not long ago we adjusted our position on Chinese investments to zero. A big reason is the uncertainty and risk that’s prevalent there right now, due in large part to President Xi Jinping’s remaking of the Chinese economy to fit his vision. Similarly, the latest Evergrande default situation and others yielding disastrous results make us underconfident currently investing there.

To recap, China’s second largest regular state developer, Evergrande, is in danger of going under. To put this into perspective, the firm’s liabilities equal about 2% of China's gross domestic product. Last Thursday alone, Evergrande missed $83.5 million in bond interest payments.

The reason this is such a big issue in our opinion is that in the past, such large, important firms would almost certainly have been bailed out by the state. That’s in large part because China has always viewed housing as the third leg of the economic stool.

But President Xi has demonstrated this year a higher tolerance for economic risk if it will help achieve his agenda. Thus, Evergrande’s issues are a direct result of new policies forcing developers to meet tougher metrics on their debt. The distressed situation has put previously unseen pressure on Evergrande’s bond prices: 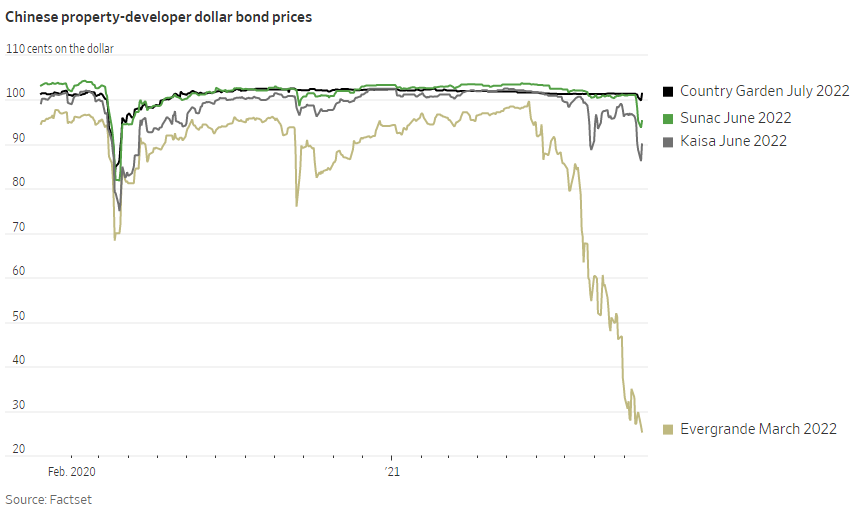 As one example, the June 22, 2021, bond issuance, which was trading at a 6% yield earlier this month, now yields 17%, according to Factset (which indicates extreme risk). In addition to their massive borrowings, as of June, Evergrande also owed around $180 billion to individual homeowners, contractors, and others in outstanding accounts payables and unbuilt homes to buyers.

Obviously, this all created a global shockwave last week. We had quadruple witching on a Friday. Then the unexpected Evergrande catalyst popped up over that weekend. This combination exacerbated the inevitable volatility. Pressure was building up and the soonest it could be released was the following Monday. Then missed bond payments shook things up later in the week.

What happens next? That’s anybody’s guess.

We believe the state will step in somehow, including a possible takeover. Regardless, this situation is another example of accruing risk in China, which further confirms our firm’s decision to exit the Chinese equity markets.