A Solution for When Data Conflict

Earlier this year, we raised our forecast for the S&P 500 (the market). What you may not know is, behind the scenes, we've also lowered our internal forecast for real gross domestic product (GDP) growth throughout the year (the economy).

This may seem counterintuitive.

But when we say we're bullish on stocks, that doesn't mean we think the stock market is going up every day, every week, or even every month. Nor does it exclude the possibility of a correction. As a reminder, we take a long-term, fundamental approach, rather than trying to time the market.

Corrections will happen from time to time. And we don’t know anyone who can accurately forecast them consistently.

In terms of the market (i.e., stocks), we remain bullish for three reasons:

The key problem for real GDP is the massive, unsustainable fiscal stimulus and income support that happened during COVID-19 pushed retail sales unsustainably high.  To put this into perspective, retail sales in July were 17.5% above the February 2020 numbers (pre-pandemic). Comparably, in the 17 months prior to the pandemic, retail sales were up 5.1%. There is only one way retail sales can grow three times the normal rate, and that is the government pulling out its credit card.

Why does this matter, especially as we expect moderation from the 17.5% peak in June?

Well, retail sales make up about 30% of GDP. Remember, we're a consumer driven economy. So other sectors of the economy will need to pick up the slack like, replenishing inventories, home building, and the consumption of services like travel, leisure activities.

Additionally, when comparing this seeming disconnect between us lowering our GDP expectations and raising our S&P 500 forecasts, remember how GDP includes revenues of both publicly traded companies and Main Street businesses that aren’t listed. As we all know, it’s those latter businesses that have been hurt the most by lockdowns. That's one of the biggest reasons why listed company profits and their stock prices have outperformed the economy and should keep doing that going forward.

The bottom line is that we are bullish, for now, but fully recognize that we have been in a pristine environment for stocks in comparison to the economy. We say this while recognizing the risk of a slowdown in GDP that will likely slow profit growth. We also recognize how rising inflation will eventually lift long-term interest rates. And of course, tax hikes could be approaching.

Therefore, while the market is not overvalued, it is also not as undervalued as it once was, as we have preached over the last year.

Shifting from a market vs. economy struggle, what are we seeing in the short-term data?

To start, it’s September, and that’s historically a volatile month. But, in what we’d consider a positive sign, the trusty MAPsignals Big Money Index (BMI), which tracks institutional investor activity, sits solidly around 60%. Buyers and sellers are showing up in equal measure. It seems there’s a nice base forming that could set up a rise in the back half of the year: 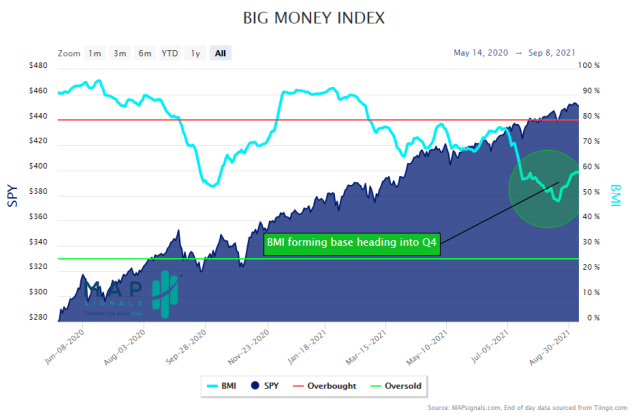 Looking at the MAPsignals sector rankings, we can see the balance between buying (green) and selling (red):

Interestingly, look at communications, industrials, and health care, as well as the equality between buying and selling. We think that’s reflective of a settling foundation for further growth.

Underneath the surface, we're still seeing quality stocks being purchased. That strengthens our thesis that the odds are in our favor for a strong fourth quarter and we should see a bounce off the BMI base being formed currently. Further, we expect activity to increase in the back half of September since the holidays are done and kids are back to school.

As we’ve preached before, the rest of September should bring more volatility and potentially some downward pressure. But don't get too hung about prices or trying to buy the market dip exactly. Because in the end, we have confidence valuations will be higher in the coming years.

That doesn’t mean there aren’t risks. When it comes to inflation, at least from an economic standpoint, it’s still at the top of our risk list – and for good reason.

Not only did I endure the price rise of the “pizza and pop” combo meal at Michigan Stadium (Go Blue!) to $19, on top of that, the most recent August Consumer Price Index (CPI) and Producer Price Index (PPI) numbers came out. They showed increasingly accelerated inflation numbers across the board.

Specifically, the CPI increased 0.3% in August, meaning inflation is up 5.3% from a year ago. Why does this matter? You've maybe heard people on the news talking about how wages are increasing. Or perhaps you’ve seen the signs hiring dishwashers for $20-25 per hour. But when you consider inflation, the real average hourly earnings year-over-year are down -0.9%:

Another way to assess the underlying trend of consumer inflation is to measure price gains since February 2020 (pre-pandemic), which naturally include the price declines early in the shutdowns. Since then, consumer prices are up 3.6% annually. That’s well above the Federal Reserve's stated goal of 2%, which makes it confusing as to why this hasn't created a rude awakening for the Fed yet.

In trying to determine if the CPI will continue to increase at this accelerated rate going forward, we move our attention to the PPI. This gives us an idea of what prices haven’t been passed along to consumers yet. The August PPI rose 0.7% which means that producer inflation is up 8.3% versus a year ago:

While the Fed continues to say higher inflation is transitory, it's getting increasingly difficult to play down these continued rising numbers, especially as supply chain issues continue to put significant pressure on prices, with no end in sight. These price increases will continue to be passed on to the consumer.

With that in mind, it’s no wonder wages are rising but many people aren’t getting ahead, especially on the lower end of the wage scale.

With all this conflicting data blowing your mind – how do we plan for all these unknowns?

Let's create some perspective around corrections or bear markets and trying to time them. Simply put, it doesn’t work. So, let’s instead focus efforts on long-term risk mitigation planning using the below chart. 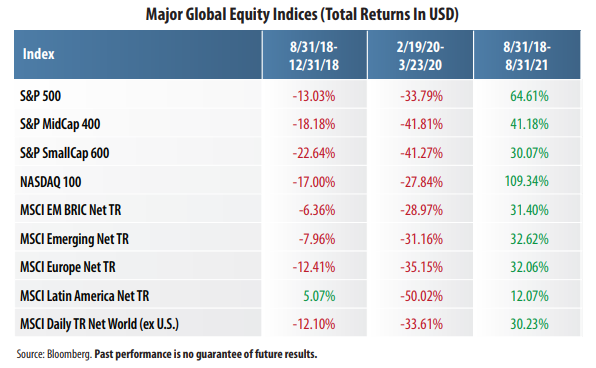 Now let’s look out over the long-term, ignoring short-term corrections and even last year's COVID-induced bear market. Over that span (Aug. 31, 2018 – Aug. 31, 2021) equity investors would be pleased with the performance results (the last column of the table).

So again, how do we plan for all these unknowns?

When multiple data align, the course is easier to see. But when there are conflicting narratives, as we have now, the course forward isn’t as obvious.

Consequently, we're using this perspective to tie the conflicting economic and market data discussed above with the current multitude of articles and videos featuring pundits, analysts, and podcasters predicting when the next correction will arrive. Keep in mind, the S&P 500 has never failed to recover from losses sustained in any prior correction or bear market when a long-term, goals-based plan is followed.

Hopefully this assures readers again that time in the market beats timing the market.