Leading up to the election, many pundits predicted continued market unrest and volatility. They said the storms were coming, and it was going to be an ugly, wild ride.

Now that we have hindsight, how did that prediction work out? About as poorly as most political polls.

Readers of this blog know we’ve consistently identified and highlighted how institutional investors (“big money”) sell before general elections to reduce risk, then buy after the results are in because they have more clarity. It happened again this year.

Why the massive turnaround? In one word – relief.

Election week had two surprise outcomes, the first being the market gains, and the second being a big drop in volatility. The VIX Index, a measure of market volatility (more volatility = larger VIX value), dropped 35 percent, which is its fourth-largest weekly decline ever and the largest weekly drop since – weirdly – President Trump’s election victory week in 2016.

We’ve mentioned November is a seasonally strong month and history shows the market is usually up an average of 7.5 percent six months after the presidential election. In addition to the post-election relief, we also had some strong October economic news (values larger than 50 in the index listings below indicate growth; less than 50 signals contraction):

Every one of these data points reflects continuing economic recovery.

Let’s shift to see what Map Signals’ Big Money Index (BMI) reflects about institutional investor activity. Leading up to the election, historically we saw a consistent pattern of “big money” selling before elections and buying after the votes are counted: 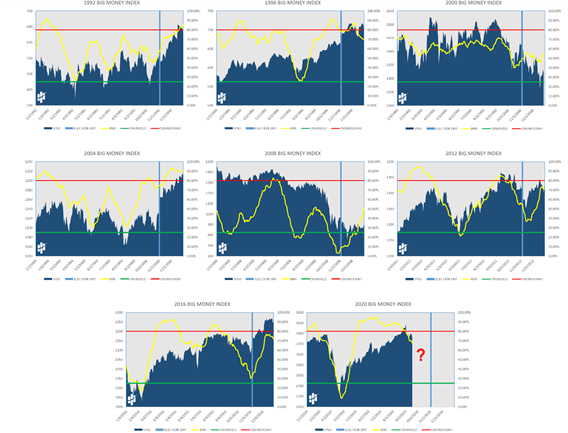 In 2020, we now have the data to see the buying came a bit ahead of schedule: 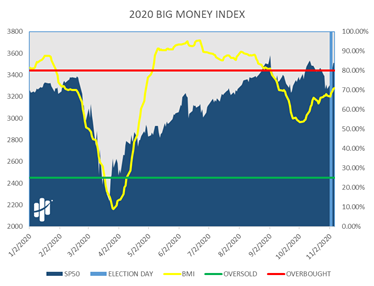 The important thing isn't so much that 2020 played out according to historical data, which it did, but rather how we can clearly see the impact of “big money.” Markets respond to “big money,” not the other way around. Therefore, we find the BMI to be a useful predictive indicator.

Why did “big money” and markets move as they did? We believe the recent stock market jubilation isn’t because of President-elect Biden’s win, but over split powers, checks and balances, and the likelihood of significant gridlock for at least the next two years. This is Wall Street’s best friend and symbolizes “game on” for institutional investors.

Looking at buying another way, it’s clear from election week net buy/sell signals that there was selling before the election and green bars since: 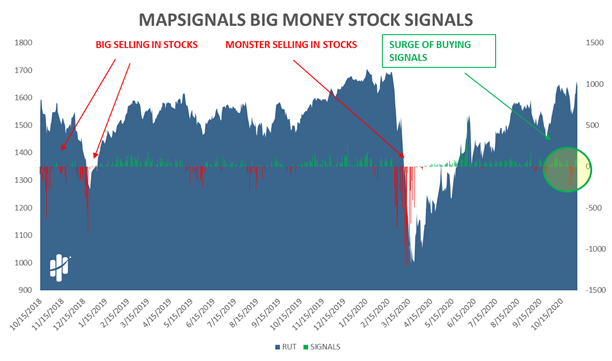 Here is the buying surge up close: 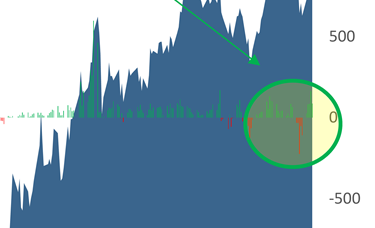 To us, what's most interesting is what “big money” is buying this time. Although institutional investors came to buy nearly everything during election week, they didn’t buy equally. The yellow cells in the table below represent huge buying of more than 25 percent of stocks in the sector:

All growth sectors got snapped up during election week, while the value sectors underperformed. But last week we saw a rotation, with huge buying in value sectors. Why?

The announcement of the preliminary 90 percent efficacy rate of the Pfizer/BioNTech COVID-19 vaccine.

It has created the beginning of a broader bullish market performance than we've seen at anytime this year. When combined with stellar earnings reports coming out left and right (according to FactSet, 89 percent of all S&P 500 companies have reported earnings for the third quarter and 86 percent of them beat expectations), it only adds to the bullish case.

One last metric that dumps additional gas to the bullish market fire is exchange traded fund (ETF) activity. From Wednesday to Friday of election week, we saw 87 ETF buy signals. That's more than we had seen in the previous 20 trading days combined. 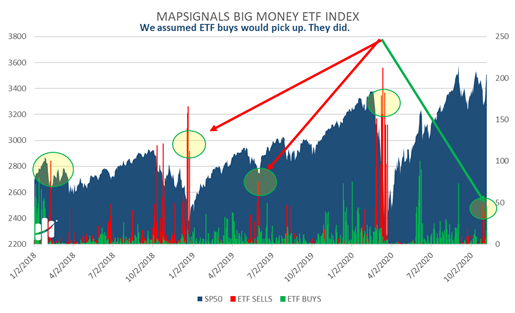 Here is the surge up close: 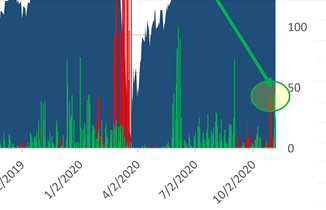 The buying is indicative of a full market “risk on,” meaning investors are absorbing risk by buying equities in massive amounts. The calculus is simple actually:

While we expect to close out 2020 in bullish fashion, there are three events that could provide resistance to this trend sometime early next year – and we’re keeping a close watch on them.

First and most glaring is the surge in COVID-19 data. It’s likely a vaccine, even if widely accepted by the public, won't be available for several months.  However, the aforementioned trial vaccine results could help alleviate this concern somewhat.

Next, control of the Senate rests in the hands of two special elections to be held in Georgia. If both go to the Democrats, the Senate will be controlled by Democrats due to Vice President-elect Kamala Harris providing the swing vote. This could negatively affect markets because the gridlock investors like would disappear as Democrats would control the House of Representatives, Senate, and the White House.

Lastly, the U.S. dollar could suffer if further big spending to battle COVID-19 takes place in Washington. While no alarm bells are sounding now, that wouldn’t be the case if the U.S. Dollar Index falls to 88 or below (it’s around 92 as of this writing).

We’re raising these caution flags for two primary reasons – to generate awareness about them and so our readers know Cornerstone is monitoring developments, ready to act accordingly. But we want to be clear – the market is currently optimistic and is not pricing in any of those events being negative.