The Pricing in of Gridlock and What’s Next

As we sit today, it appears there is no red or blue wave crashing down. Instead, we (thankfully) have an established system of checks and balances between the executive and legislative branches.

Not missing a beat, the market began to aggressively price in this “gridlock” probability last Wednesday, November 4, one day after a presidential election with no official result.  We immediately saw 92% buy signals out of 120.  Even better the buying was broad across Technology, Healthcare, ETF’s, broad market indexes, and even Cyclicals creating “liftoff”.  And as we’ve discussed ad nauseum over the last three months, the one thing history has always shown is the market likes gridlock.

So, what can we expect going forward?

Well, over the last century, stock prices have suggested the ultimate destination is up. But during the journey, countless setbacks, course changes, and storms of all sorts may arise.

Such storms have led to significant volatility over the last month and the market needs a cushion from that volatility. As our readers know, we find the insulation often comes from our favorite exemplar – “big money” institutional investors.

Institutional money managers include pension funds, hedge funds, sovereign wealth funds, and other large concentrations of money. When these huge pools of money are deployed into the market, they act as a support for everyone else (i.e., individual investors).

“Big money” buying means the market doesn't rock as violently. As we’ve mentioned, since institutional investors carry great responsibility, they sold leading up to the election to alleviate risk, as they have done historically. When these investors take money off the table, markets can fall.

Based on the 25-day moving average of Map Signals’ trusted Big Money Index, we can see that “big money” has been selling since June, which is consistent with our analysis of previous election years: 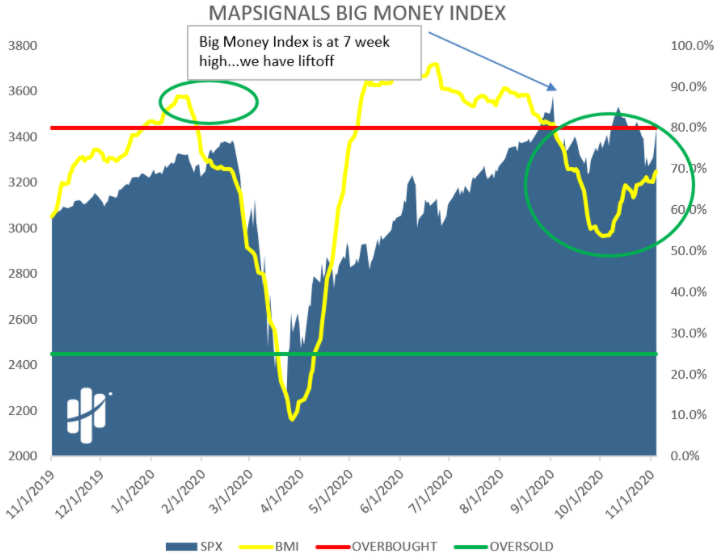 Even though one might favor a candidate to win, nobody has any way of knowing the outcome until all the votes are counted. As a result, as is consistent with history, we've seen “big money” sell ahead of elections and buy afterwards as the picture becomes clearer.

When “big money” reduces its investments, it's like someone taking out or removing the insulation for the rest of the market. When volumes of “big money” go away, the buy/sell spreads on stocks get wider and there's typically less volume.

When this occurs, our greatest enemy – high-frequency and algorithmic traders – can come into the market by testing liquidity.

If they sell and there's “big money” there to buy, the sell order is gobbled up instantly. The high-frequency and algorithmic traders will then cover their short and reverse to buy stocks. The opposite happens if there are small volume bids, meaning no “big money.” Such a situation creates volatility spikes and prices sag.

This is when things get ugly on the surface for retail investors, and it’s what we've experienced over the last month. We especially saw this in the sell-off that took place on Wednesday, October 28, so much that the correlation was high (near 1), meaning that everything went down, not just some sectors:

The lesson learned is that when “big money” is out of the market, things can get rocky quickly due to a lack of demand. This, along with the acceleration of earnings announcements and a concurrent election, is why we experienced such increased volatility.

Now that the market has more certainty, we've seen buying come back in. It started even before the election, on Friday, October 30, and increased significantly in the days immediately following the election, ultimately alleviating much volatility.

Slowly but surely, the big picture of uncertainty is being resolved. This helps make way for more relevant uncertainties like whether a certain company will miss its earnings estimates by a few percentage points, or whether or not the NFL will have 14 or 16 playoff teams!

It may seem a tad confusing that there was an uncertain presidential election outcome, yet markets reacted positively. We can provide some clarity.

Markets plowed on, despite nobody knowing who the president would be, and a key reason was the benign overall election outcome, the highlight of which was the Senate majority looking to remain Republican, creating “gridlock”.  Remember, we’re in a system of checks and balances, and markets reflect future earnings.

But it goes beyond the election – we think there are several tailwinds behind the near-term market increase: 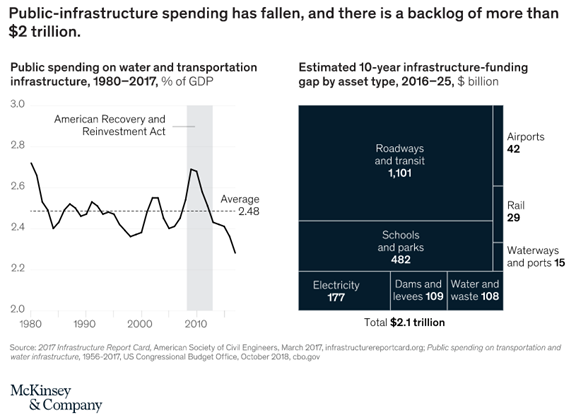 As you can see, there is a lot happening to propel markets. In other words, there’s a lot to like. Still, nobody knows the future. Even still, there are many encouraging signs for investors.