In recent posts we’ve covered how taxes and regulations in a potentially changing political environment could affect investors. They could change drastically, and they’re just two of many important factors that will determine the fate of our future economy and overall production.

In other words, a lot could be different, starting in a little more than a month from now. But will change occur? If so, how much? And when?

Ambiguity is to investors what kryptonite is to Superman. So, today we’ll try to deliver some clarity on what uncertainty leading up to the election means for markets and volatility.

The S&P 500 is down about 5 percent this month, which is quite the reversal from gains in July and August of 5.89 percent and 6.98 percent, respectively. But remember, the summer was when the “animal spirits” were flying highest.

Buyers were running rampant. We even pointed out how exchange traded fund buying was off the charts (we also said how such buying usually precedes unsettled markets).

The month began with investors taking profits from technology and energy gains. But there were still bits of healthy buying, though significant outflows still occurred in the staples and utilities sectors:

While it looked for a couple days like the selling spell was behind us, typical September weakness reared its head due to underlying volatility. Since 1990, the average September S&P 500 return is -0.34 percent. In election years it’s worse, returning -0.85 percent.

That means in election-year Septembers, markets perform 2.5 to 3.5 times worse than in non-election years. It’s due to uncertainty, which investors dislike – especially big-money investors. So, they typically shed risk heading into elections: 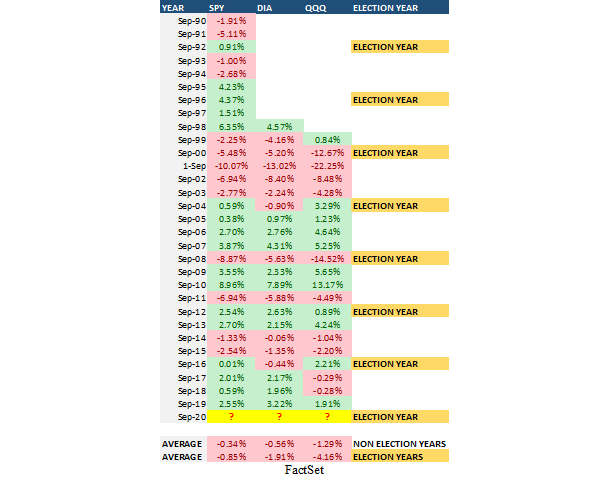 As an investor, you don’t want to fight the trend, which is downward for Map Signals’ Big Money Index (BMI). Institutional investors understand what election year Septembers mean. As a result, they sell stocks before elections, then often buy again soon after there’s a result. 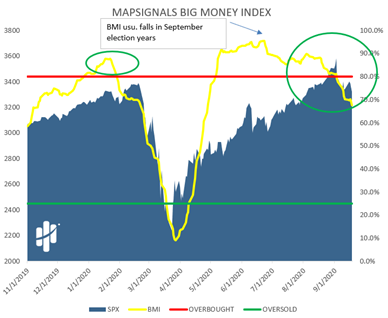 In the last three elections – 2008, 2012, and 2016 – stock buying picked up after results were known. Here are BMI charts reflecting the trend (the vertical line is election day): 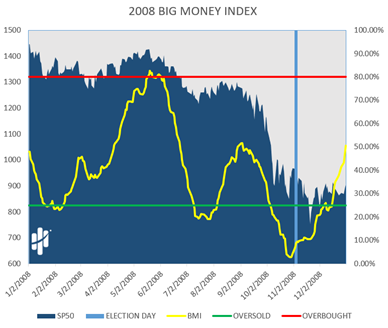 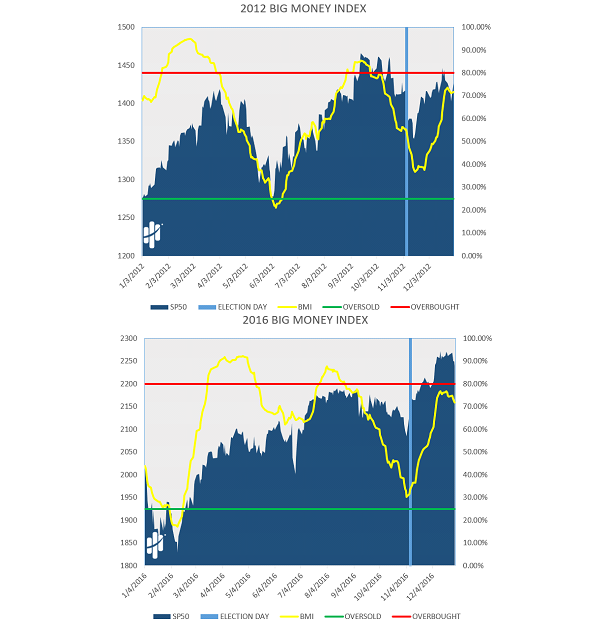 In each instance, the yellow line plummets as the election nears, then rises afterwards. Is that starting to happen now? It seems that way. 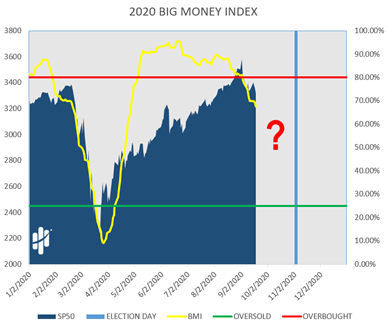 This pattern has occurred all the way back to 1990. But for the sake of everyone’s attention spans, we’ll spare you the charts!

Given this history, we believe the stage is set for a market rise because:

Thus, it’s (still) a good time to have dry powder in the form of cash on hand. That way, you can let the political worry of others become investment opportunities.

As for who will win in November, we’ll leave that to cocktail party guests and talking heads. Instead, we’ll stay focused on current and historical data, which guide us in our portfolio decisions. Still, we do want to provide an obligatory reminder to get out and vote, so here it is:

Dividends Up for Year, Outlook Optimistic

Lately we’ve received quite a few questions about corporate cash flow and liquidity. Companies have a number of ways to return capital to shareholders. Two of the most popular are cash dividends and stock buybacks.

Now, dividends have been a steady force in investing for some time. And prior to COVID-19, stock-buyback programs were prominent, almost doubling dividend payments as of the third quarter of 2018. 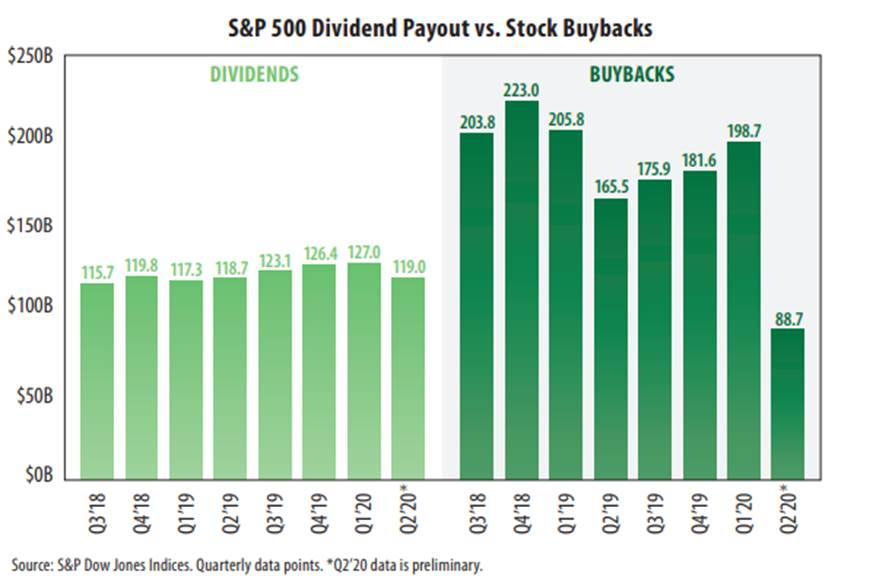 But the pandemic cut buybacks quite a bit.

Comparatively, the S&P 500 dividend payout of $119 billion last quarter was down from previous quarters, but up on a year-over-year basis. As the chart indicates, dividends are showing to be resilient thus far overall.

Our conclusion is firms are more likely to defend dividend payouts than share repurchase plans. So, dividends will probably remain, you guessed it, stable. Share repurchases are more of a wild card.

Overall, S&P 500 firms are flush with cash. The industrial sector had a record $1.675 trillion in cash and cash equivalents in the first quarter of this year. That’s just one sector.

This cash glut supports our theory that growth dividend stocks are advantageous both in valuation and future growth prospects. We have invested in them and will continue to do so accordingly in our model portfolios.