This week we continue to look at the economic and market situations in the U.S.

Even though we’re in unprecedented times where nothing seems to shock, some recent data opened eyes everywhere.

The May unemployment report was almost unbelievable.

Before it came out on June 5, almost every economist expected unemployment to reach about 20 percent. Instead, 2.5 million non-farm jobs were added to the economy, dropping the unemployment rate to 13.3 percent. That’s still too high, but it’s much better than 20 percent.

The data shocked analysts and leaves little doubt we’ve already hit the bottom. In other words, the economy is improving.

Obviously, a full recovery is still going to take at least two years. That said, positive unemployment numbers should continue going forward if there are good reports on retail sales, industrial production, and home building, as we expect.

We think this rise in payrolls is a combination of the economy getting back to work and the Paycheck Protection Program allowing businesses to bring back workers. Initial jobless claims fell for the ninth straight week. Better yet, continuing claims remain below their peak, which was the week ending May 9.

While unemployment reports don’t capture everyone not working for any reason, whether you count everyone or not, the change is positive. And frankly, that’s what matters to financial markets.

Revisiting tax receipts, as we’ve discussed before, two weeks ago Treasury collected 11.8 percent more individual income and payroll tax revenue – the money withheld from paychecks for taxes – than in 2015 (that range is used because the date/month cycle are identical). In comparison, the month before that was up 7.1 percent relative to 2015.

These data points taken together, along with the high frequency data improvements seen in the table below, are signals the economy is turning the corner. This is exemplified by forward-looking investment markets being ahead of this information. 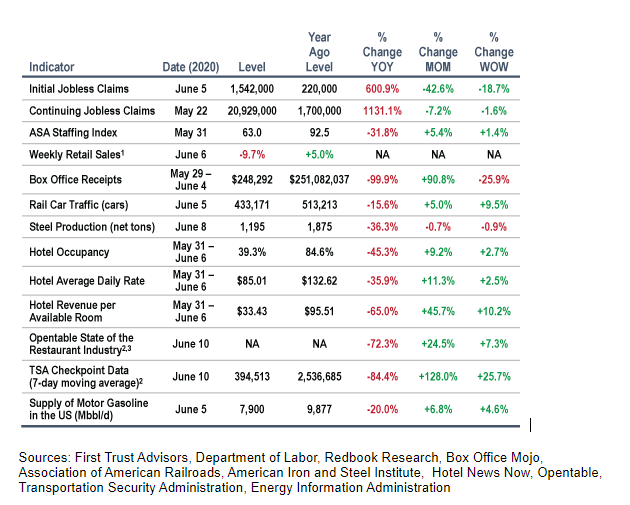 Big money activity is a common topic on this blog. And frankly, big money movement has been discussed at nausea recently.

But it must be brought up again this week because since the March crash, big money movement is beyond big. It’s outgrown that word.

These recent moves are so vast, they’re gargantuan. They’re immense. They’re galactic in size. On a scale of one to 10, these buys are so big, they go to 11. 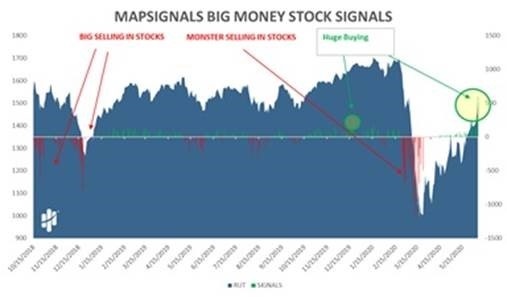 Kidding aside, there are a few reasons: 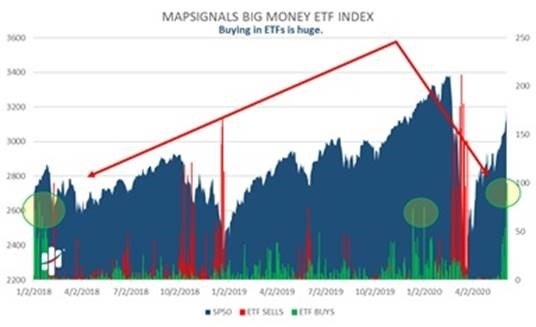 To give an example of how big the buying was, let’s look at the market from a sector perspective. We’ve discussed market signals a lot, especially recently. In a normal situation, seeing a handful of sectors emerge into the yellow in the righthand columns on the table below is great news. It means that sector’s “universe” saw a 25 percent or more increase in activity relative to the prior period.

In the recent past, we were excited about a sector or two going yellow. Well, now every sector is yellow:

It can’t be understated – the buying is mammoth. Five sectors saw more than 100 percent of their “universes” bought.

Now, it’s quite clear the markets are heavily overbought. We’re seeing significant upticks in retail investor buying, which tends to happen as the market crests.

As a result, forward-looking returns in the near term aren’t that exciting as we reach these market crests.  We already began to see this play out last week, especially Thursday as we start to cycle out of this overbought market. Expect some rockiness over the next few months as we’re seeing the last few buyers (retail investors) jumping in.

Caution is required. But as things settle, it will again become an attractive entry point for more investment from cash positions.

All in all, this isn’t a lot of new data. But it’s more data.

We seem to be riding a wave to a crest. That’s not to imply there will be a crash. Normal market behavior includes ebbs and flows and its encouraging to see the data begin to make sense again.

We bring this up to advocate preparation, not panic. Readiness is more vital now than ever.