The Diverging Paths of Wall Street and Main Street

Right now, it seems there two rather stark American realities.

The one investors are experiencing is prosperous and promising. The one felt by millions of American workers is fraught with economic loss and vast uncertainty.

This post will examine these diverging paths, how they got there, and perhaps where they’re going.

By all the usual measures, stocks should be going down in value. But they’re not. They’ve basically recovered from March lows, making the three-day bear market from March 23-26 the shortest one in history.

In the last two months, major U.S. stock indices have gained 31.6 percent and 35.9 percent, averaging a 33.7 percent return from the depths of the market recession on March 23. This table showing returns of several stock indices since then says it all – green across the board: 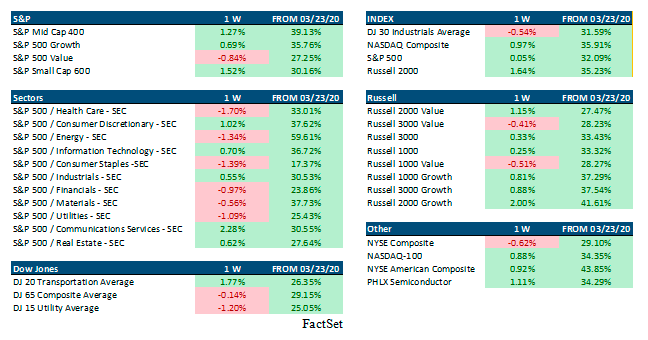 Sector strength is improving as well, with technology and health care looking quite strong, and others not too far behind. It’s a far cry from where we were earlier this year.

Now, what’s more important from a market perspective, figuring out why this is happening, or figuring out how to adapt going forward?

We’ve technically been overbought for 13 trading days, but as we know, that could last much longer, or it could end tomorrow. The 30-year average says to expect an overbought market to end in about 20 trading days, or in about a week-and-a-half (as of this writing). 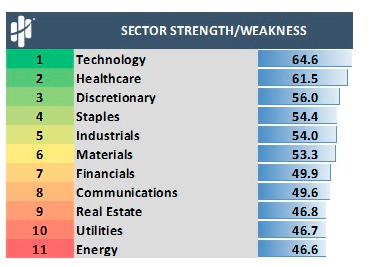 When the market becomes oversold, it’s best not to sell. Rather, it’s best to buy while others are selling. This is why in our managed accounts we still have about 13-14 percent of available cash across all model allocations.

Frankly, the market is in a confusing spot right now.

The fundamentals say, “Stay away,” while the technical indicators and price performance say, “All aboard!” We’re normally fundamentally driven, but investors can’t ignore or fight technical data right now because that is essentially fighting the Federal Reserve. Bad idea.

But the market doesn’t have to make sense. Investors simply need to adapt as the environment changes. The data say buyers are in control and may keep that position for a while.

However, it seems the market is due for a pullback due its overbought nature. We don’t know when. But when the day arrives and the selling begins, we will deploy the remainder of our cash.

To continue the positivity, it’s clear that as more people go outside and are making decisions based on their personal situations and risk tolerances, signs of economic life seem to be reappearing.

Also, the number of homebuying customers contacting affiliated agents is now above pre-COVID-19 levels. There were also two straight weekly increases in mortgage applications in May. Uber also said rides were up for three straight weeks, seeing 40 percent increases in large Texas and Georgia cities from their 2020 lows.

But this is where the story takes a different path.

As we’ve mentioned before, other measures we consider when analyzing economic recovery health are unemployment claims and federal tax receipts.

NEW unemployment claims are extremely elevated. But at least they’re substantially down from the 6.9 million claims filed in the last full week of March and continue to slow overall.

Typically, new unemployment claims peak about two months before the economy hits bottom. Should that hold true with current April high, we should see the bottom in June.

CONTINUING unemployment claims, which are from workers who continue to file for and receive unemployment benefits, keep rising too. Usually, these claims peak a month after the economy hits the bottom.

If CONTINUING claims peak soon, that’s a good sign. It means the economy is already starting to grow again. That would align with an economic bottom in June.

Daily federal tax receipts are a good health gauge of the overall economy because they show the depth and breadth of our employment income situation. In the first quarter of 2020 before COVID-19, receipts were up 19.7 percent compared to 2015 (that range is used because the date/month cycle are identical).

We won’t see 2019 real gross domestic product levels until late 2020 or even 2021. None of this is good news. That said, economic indicators (that lag equity markets) are starting to show progress.

If there is a saving grace for Main Street that could greatly accelerate all the dire projections – granted this is a Hail Mary pass of sorts – it’s that there is a concerted effort nationally to bring back manufacturing, especially from China’s control on our medical supplies.

If that occurs on a large scale, it could be a huge new growth seed.

However, we’re still in early days and such growth can’t be quantified yet. Still, if the repatriation of manufacturing happens, it will no doubt be a huge boon to all Americans, providing significant improvement to our economy and national security.