Mixed Signals May Indicate a Stalled Recovery Ahead

Investors are probably glad September is over, as it delivered its typical down performance, with the market falling 3.52 percent. While October entered with a bang, it wasn’t without drama, be it from an unconventional first presidential debate or President Trump’s bout with COVID-19.

Still, we remain focused on market indicators. And we’ll give advanced warning – we see conflicts in the data.

Regardless of all the external news, over the last week or so, buyers came in hard and fast. Per the chart below, there was significant buying in discretionary and utilities stocks, while technology, industrials, healthcare, and materials showed decent buying as well. The pain points came from communications and energy stocks.

What we found most interesting is minimal market damage on the day the White House announced positive COVID-19 test results. In fact, the Dow Jones Industrial Average was up intraday for a bit, and small caps finished ahead for the day. The NASDAQ made investors nervous though, as it dropped 2.22 percent. But even with that decline, it was still up 4.1 percent compared to the low of September 23.

That’s not so bad considering the leader of the free world announced he contracted an incurable virus during a pandemic.

So, it would appear buyers are coming back into what seems to be a fragile market that was surprisingly resilient to the recent COVID-19 news. However, the conflict we’re seeing in the data arises from the fact that we’re in an election cycle.

October seems to be the return of buying as investors seek to alleviate any last-minute FOMO (fear of missing out) before the November election. But history suggests this month’s apparent strength may be short-lived as Octobers tend to be on the weaker side in election years, delivering a -2.45 percent average S&P 500 return: 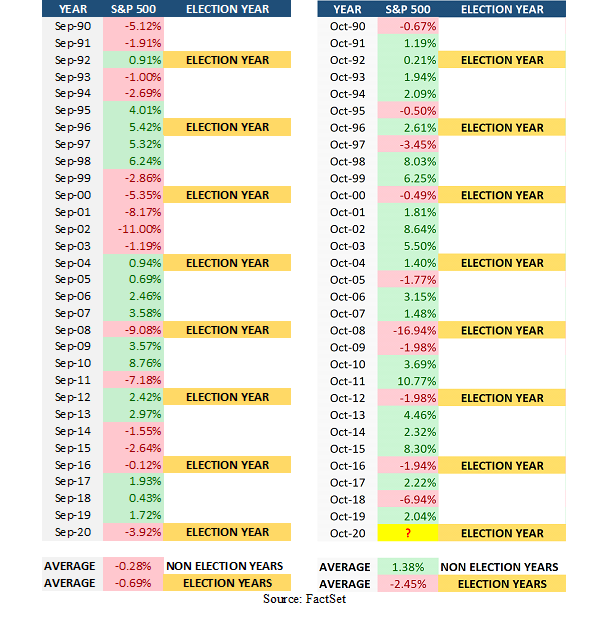 But rather than focus on returns, let’s turn to the “big money.” Our trusty Map Signals’ Big Money Index (BMI) has been falling for well over a month: 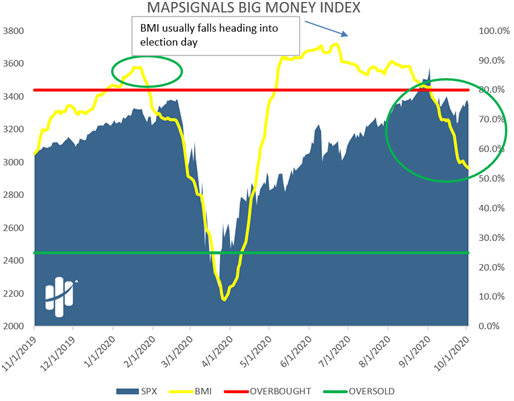 If we look to history again, since 1990, the same pattern has emerged in election years, regardless of which party wins – the market rises once there’s a result: 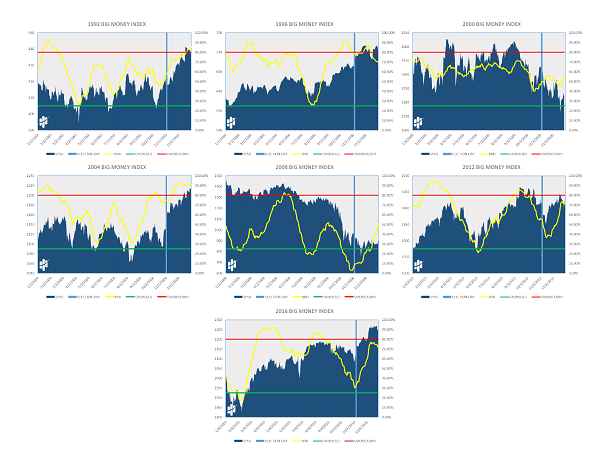 The reason is institutional investors, who manage billions of dollars, want as much certainty as possible. They don’t want to risk losing on investments that aren’t “sure things.” And since at least 1990, those “sure things” become apparent once elections are done.

The 2020 BMI is eerily similar to those in election years dating back to 1990. From a data standpoint, that likely means “big money” is taking chips off the table as we enter the unknown abyss that is this year’s election. But institutional investors will likely reappear after the election. 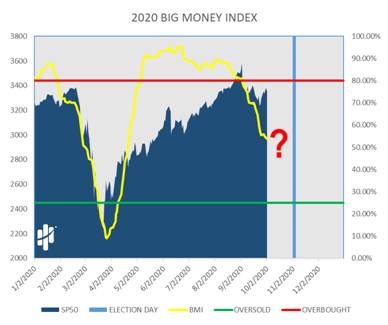 Thus, we have conflicting data. Big money appeared to show up last week, yet, the overall BMI is still showing a decline. 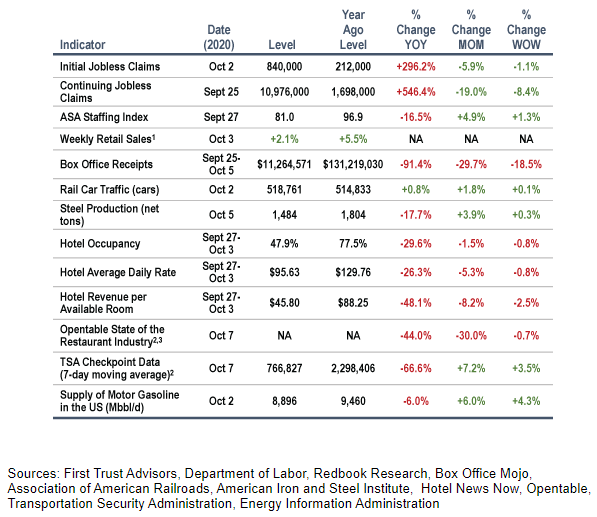 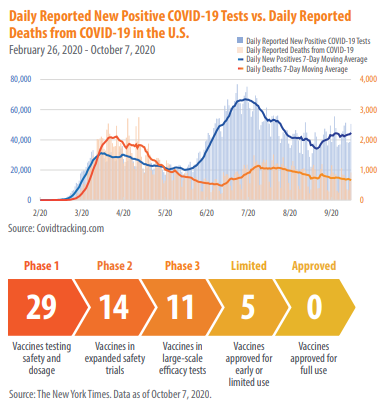 As we receive more third quarter economic data, we’re finding sustained improvement in several economic indicators. That may seem surprising with the seemingly nonstop doom-and-gloom headlines, but there is ample evidence we’re on a recovery track.

Our best assumption on the 216,000 difference is the government let go of part-time summer census workers since they’re no longer needed. It would help explain why the unemployment rate declined to 7.9 percent from 8.4 percent in August. The September readout was a nice surprise as the consensus estimate called for 8.2 percent unemployment.

Additionally, the average hourly workweek rose by 0.1 hours to 34.7 hours worked, while average hourly earnings rose by $0.11. The earnings jump creates a total income rise of 4.65 percent for the year, excluding helicopter money, which is rather incredible.

According to payroll provider ADP, private payrolls are up by 749,000 jobs, a big jump from August’s 481,000. Most of the jobs came from the service, manufacturing, and construction sectors, which is good news.

In perhaps the most surprising news from last week, consumer confidence surged to 101.8 in September, up from 86.3 in August. The increase is the biggest monthly gain in 17 years and was a massively pleasant surprise as economists only expected a modest rise to 89.6.

The expectations component of the consumer confidence index increased to 104 from 86.6 in August. This bodes well for forward-looking consumer spending and could indicate the expiration of enhanced unemployment benefits won’t dampen the economy much.

But even with all these positives, and despite the expected 34.6 percent annualized growth rate in gross domestic product (GDP), we’re still on pace for overall contraction this year. We’d need a total of 45.8 percent annualized GDP growth to break even for the year. Such remarkable additional economic acceleration is a tough ask in the fourth quarter, especially considering Disney’s 28,000 layoffs, Royal Dutch Shell’s 9,000 layoffs, and ongoing concerns with airlines and other industries.

That said, what could really get us back to even is a responsible, conscience reopening of the economy from coast to coast. However, based on the data available, it looks as if that may not happen until the middle of next year.