Stick With What Works Until It Doesn’t

Trying to anticipate the next big turn for market sectors and stocks is often like trying to pass a slower car on a two-lane road in thick fog. There are always inherent risk risks. And I think it’s safe to say investors aren’t looking for more of those.

The ride this year has been anything but smooth. There’s been volatility along with other fits and starts of so many false breakouts and bullish reactions to headlines.

We saw an example of this recently within the semiconductor sector. There was a huge bullish rally off the mid-March low of $240, which allowed the Vaneck Semiconductor ETF (SMH), a common benchmark for semiconductors, to reclaim its 200-day moving average: 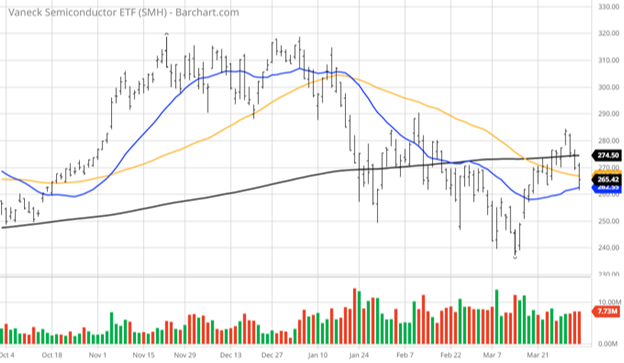 But then about a week ago, SMH gave back nearly half those gains in three days.

In our analysis, we believe the big run up was a result of overselling, which we've discussed before from a valuation standpoint, especially in technology stocks. But for a short period of time, the market ignored the fact that there's still a shortage of neon gas and palladium, which are crucial elements in the manufacturing of semiconductor chips.

Specifically regarding neon, Reuters estimated that “some 45% to 54% of the world's semiconductor-grade neon, critical for the lasers used to make chips, comes from two Ukrainian companies, Ingas and Cryoin.” Both have closed amid the war.

Therefore, we see a significant risk, in certain sectors, from the current geopolitical situation. The next few weeks will be pivotal as to how the “peace talks” play out (quotes because we don’t know what we don’t know about Russia’s intentions).

But no matter what, this is a painful setback for global trade, especially within semiconductors. Still, let’s take a positive outlook. A breakthrough in those key stocks will likely resurrect the chip sector and give global markets a much-needed boost.

So with all that said, even with a ceasefire between Ukraine and Russia, the U.S. economy is still contending with hyperinflation, the worst in 40 years. We don't need to hammer home all the details again. But let’s note that the core personal consumption expenditures (PCE) price index, which excludes volatile food and energy, was recently up another 0.4%, pushing the year-over-year rate to 5.4% from January’s 5.3%: 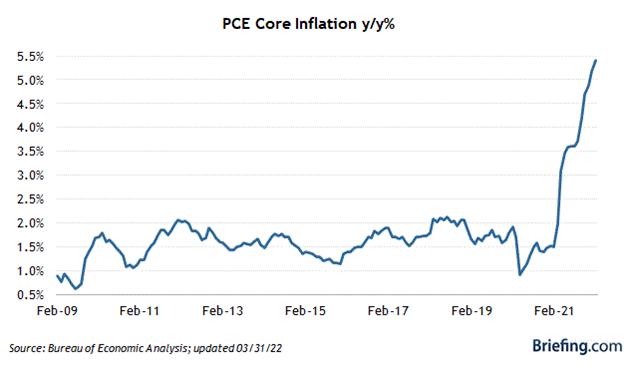 This has led to increasing speculation that the latest inflation data will force the Federal Reserve to raise the Federal Funds Rate by 50 basis points at some or all of the next three Federal Open Market Committee meetings. The speculation is reinforced when the Fed’s overall tone turns more hawkish, as it did last week causing volatility to resurface.

Part of the reason is workers are seeing more income, but they're losing spending power due to inflation. The Fed is understandably in a hurry to close the gap.

So now we come to the theoretical point of this post – what’s “hot” in the market. In our most recent analysis, the hottest stocks in the market over the last couple weeks are in fertilizer, specialty metals, shipping, energy, cutting edge medical and pharmaceutical companies, private equity, and software.

All those charts are moving up. For us, that’s a reminder that perhaps we should let inflation play itself out rather than trying to be clever and anticipating what will be “hot” next. Remember, there is still a lot of 2022 left.

See, investing involves identifying stresses in the market that are both bullish and bearish. Remember, there are winners and losers in all market conditions.

For example, current inflationary and supply chain constraints are generating huge profits for certain companies. These firms are seeing incredible demand and can pass higher costs to customers. Subsequently, charging more helps these companies go on to crush Wall Street sales and earnings estimates. We expect this to be very evident in the upcoming earnings season.

See, things can change quickly today, with little notice. That’s why it’s important to keep an agile and open mind. That doesn’t mean constantly pivoting. Rather, it means exhibiting the wisdom to analyze conditions and act accordingly, even if standing pat is the best course of action.

So for now, we'll stick with what's working until it doesn't.

The Big Money Index (BMI) from our friends at MAPsignals helps us understand the current pulse of markets. It measures “big money” investor activity that tends to drive major index performance. As it rises, markets tend to follow, with the inverse being true as well.

Recently, we’ve seen the BMI jump up significantly, indicating positive money flows to stocks. There’s been more buying (albeit somewhat muted) than selling, and that continued with 297 buy signals to just 105 sells: 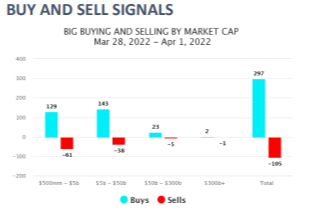 This furthers the multiweek theme of a little bit more buying and a little bit less selling. It allowed the BMI to rise again, up to about 66%. Though as of this writing, it seems to have plateaued somewhat: 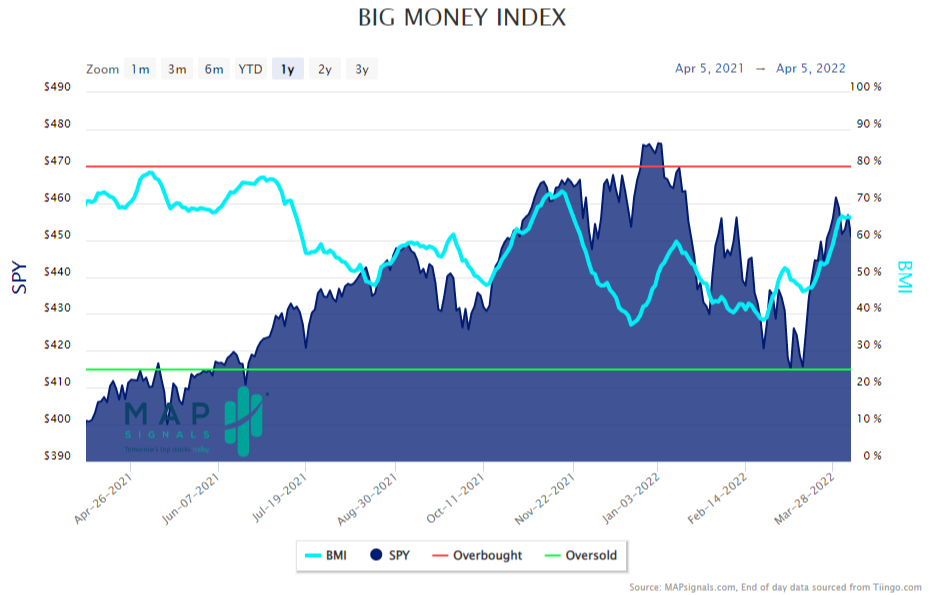 In the past, we’ve seen big jumps like this be followed by quick declines as the market consolidates. Will that be the case this time?

Well, early last week’s performance may be pointing to a “yes.” It appears the market is taking a breather to consolidate, which may have been influenced by the Fed’s hawkish tones. Perhaps this is another attempt at a “soft landing” ushered in by “Fed speak” induced declining asset prices without the use of raised interest rates.

Regardless, the BMI and markets have been rising lately, indicating that there are more buyers in stocks overall. The BMI recently reached its highest level since November 22, 2021, which was a week after the most recent peak for growth stocks like technology: 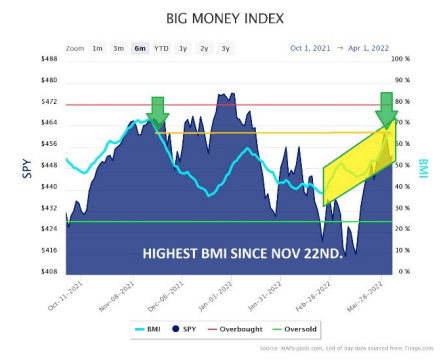 But in continuing our thoughts from last week's post – a word of caution is needed. With the recent big bounce from the lows, the sudden absence of selling could still mean short covering is dying down. Thus, the market may have more room to consolidate in the short term.

The recent buying has been fruitful though. It may even carry forward for the rest of the year. We wouldn’t be surprised since there is plenty of fundamental support heading into earnings season. This leads us to be confident in the fact that even if there is a short-term consolidation, the downfalls that began late last year are coming to an end.