Making Sense of the 2022 Investor Experience (So Far)

It’s like a washing machine. Or a rollercoaster. Or like the unfortunate soul in a dunk tank.

Up and down, side to side investors continue to go as money keeps sloshing around in different sectors, creating continued choppiness in 2022. Some sectors go up, like energy. And others go down, like technology.

It’s strikingly apparent in recent “big money” investor buy and sell activity from our friends at MAPsignals. Big buying and selling took place, with 520 buys and 509 sells. That activity, as well as some significantly large selling falling off the rolling average, caused MAPsignals’ trusty Big Money Index (BMI), which a measure of institutional investor activity, to jump to 52.5%: 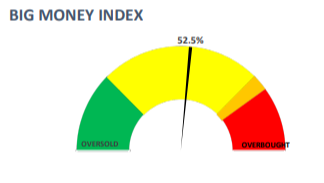 As mentioned, there was big buying and selling. But what also stands out is it took place across all market cap sizes and nearly all sectors. Money is simultaneously pouring into and out of various stocks. This table shows the sloshing around – notice the yellow highlights on the right side:

This up-and-down nature can cause anxiety and hamper performance. However, there are still ways to mitigate damage and even prosper in these kinds of environments.

Over the last week, our “trusty” news punditry (please note the sarcasm) ratcheted up to feverish highs. Depending on who you listen to, Russia’s attacks on Ukraine are either intensifying or stalling. There's a serious threat of nuclear war, or there isn’t. There were even reports the so-called “Doomsday Plane,” a modified airliner equipped for nuclear war, recently took off.

While we acknowledge that there's always some truth in the news, with all these different types of headlines swirling around, there's also a ton of noise out there. For instance, there is a new theory that came out the morning of this writing. And it seems to be pushing markets upward (or at least stabilizing them). It has six parts.

Second, he is open to compromise in the status of the pro-Russian territories.

Third, The Jerusalem Post reported negotiations between Ukraine and Russia are more serious than the West is reporting.

Fourth, outlets like Bloomberg and others are not picking up this news.

Fifth, President Zelensky is not reporting on negotiations since he does not want to damper the sense of emergency.

And sixth, perhaps it’s all just a big head fake and more noise. But at least for a day, it caused a bounce at the market open.

How to rectify all this? For us, we look to data. It helps frame all this activity in less-harsh lighting.

Let's start with the Russian economy. The ruble has collapsed more than 30% since the middle of February. But this is really a continuation of 2014, when the ruble was 70% higher than it is today (left chart below). Russian stocks have cratered too, down 40% from their October 2021 highs (right chart).

But on the other side of the data, what was once a near certainty is now an improbability. According to FactSet, on Feb. 10, 2022, the probability of a 50 basis point hike for the Federal Funds Rate in March was near 100%. Now it's at 0%. This may not help inflation, but it will help markets.

Obviously, this type of uncertainty creates volatility. And if we look at the past three months, we see selling has dominated “big money” activity in both stocks and exchange-traded funds (ETFs): 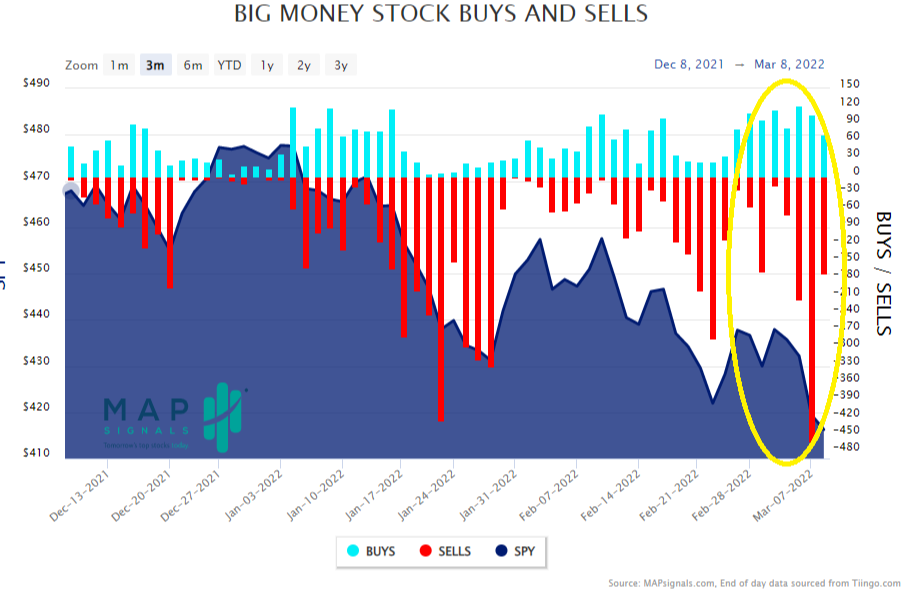 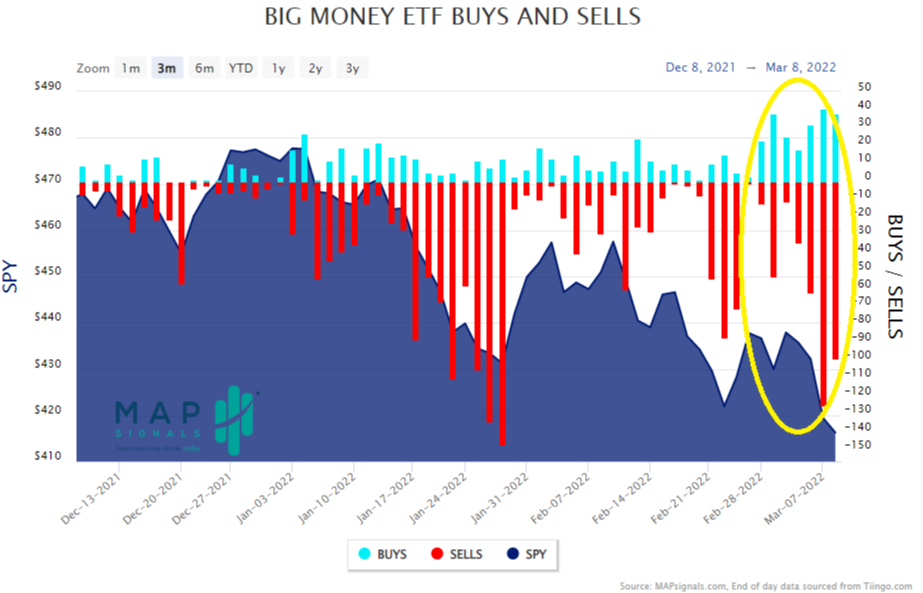 There are a couple things we find interesting in these charts.

First, the market bottom has come more than a month after peak selling. Second, even amongst all this uncertainty, we've seen buyers trying to catch a bid recently and break through after almost two months of no significant buying activity. The tug-of-war is back on.

But I’ll point out (tongue-in-cheekily) that everyone knows the stock market is terrible nowadays, right?

Since the year began, the main indexes are down significantly, especially the NASDAQ. However, there is still strength under the surface, just not where we normally find bulls or growth.

For example, energy has shot higher, and utilities and staples have been resilient. As a result, we've started to see the BMI rise: 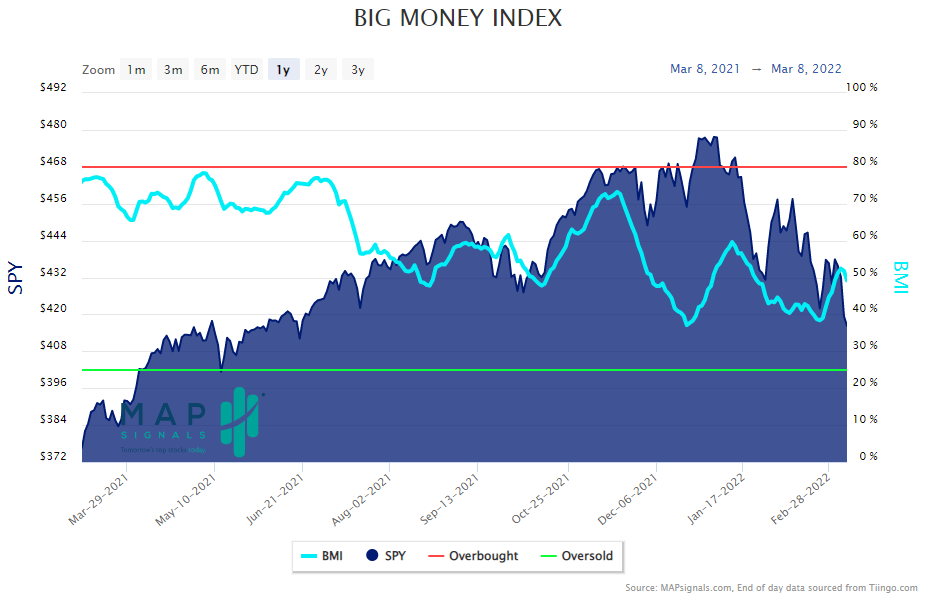 For further evidence, in the following table you can see why sectors like energy, utilities, materials, industrials, and financials have been better havens in 2022: 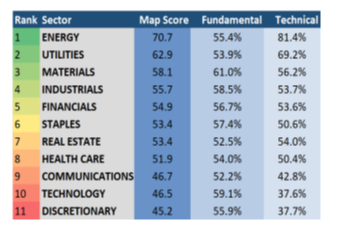 This is further reflected in the below chart of the percentage of buys from each sector universe. More than half (55%) of all buys have been in energy, materials, and industrials: 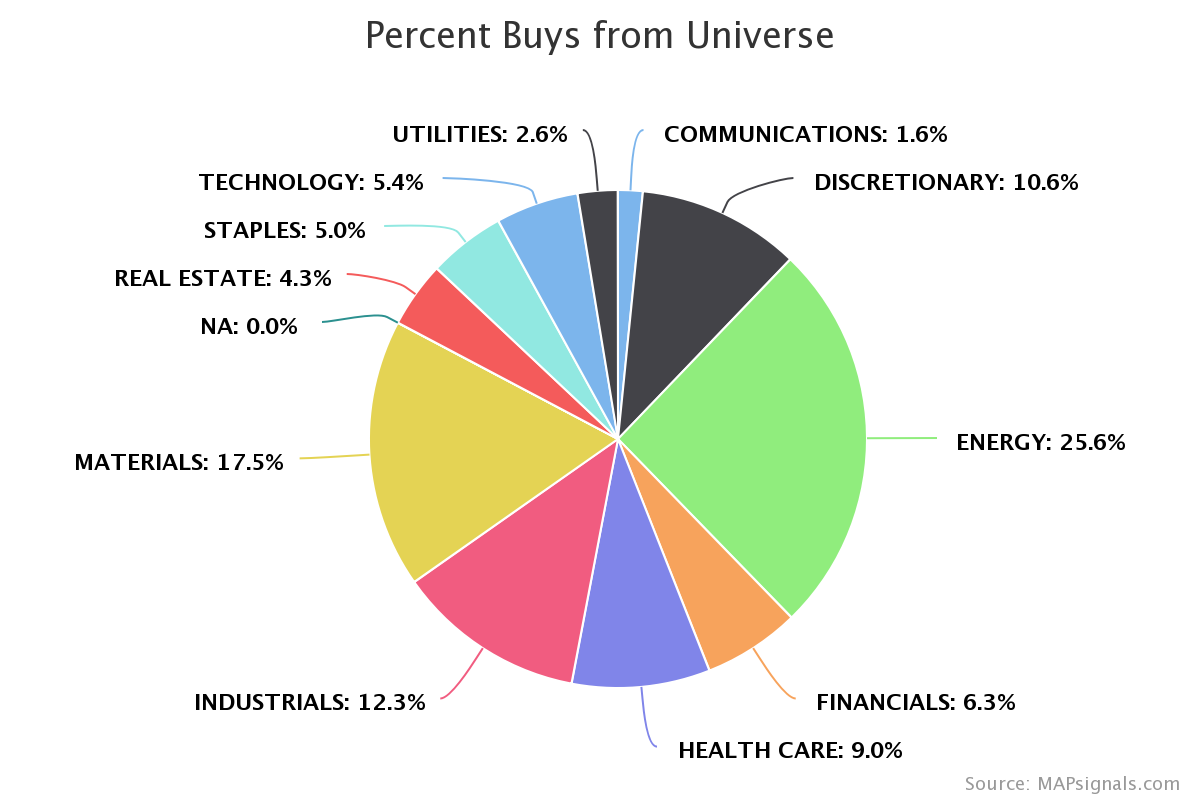 So, what we're really seeing is an amplified version of the markets going back to the latter part of 2020. There are wild rotations in and out of sectors, industry groups and themes just keep rolling on, while money shuffles around like a blind mouse in a maze (or me on a putting green).

Any Sellers or Sellable Assets Left?

Right now, I’m feeling the contrarian love. You know the Buffett and Rothschild quotes about taking advantage of fear in markets (we’ve used them in past posts). And it’s got me wondering – are there sellers left? Do they have anything left to sell?

To begin this analysis, we turn our attention to the American Association of Individual Investors (AAII) Survey. The AAII surveys its 2 million members to see how they're feeling about stocks. Bullish sentiment has averaged 38% since 1987. The latest reading on bullishness is a mere 19%. It’s the most bearish these investors have been in 35 years: 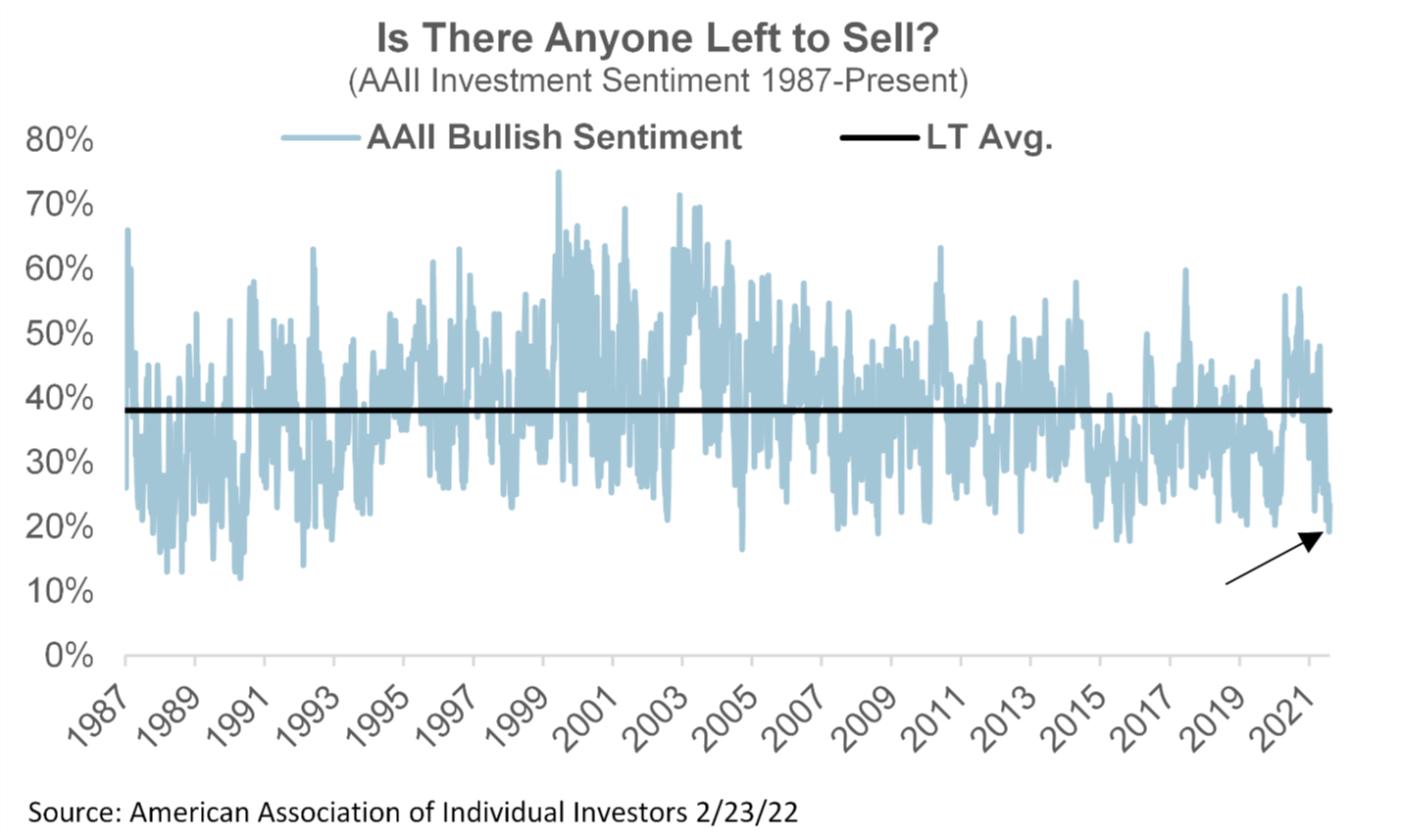 But how does this help us make money?

As our sage historical investors Buffett and Rothschild know all too well, it’s time to invest when sentiment gets extremely negative. For example, the S&P 500 has returned an above average 6% in the six months after depressed AAII bullish sentiment readings: 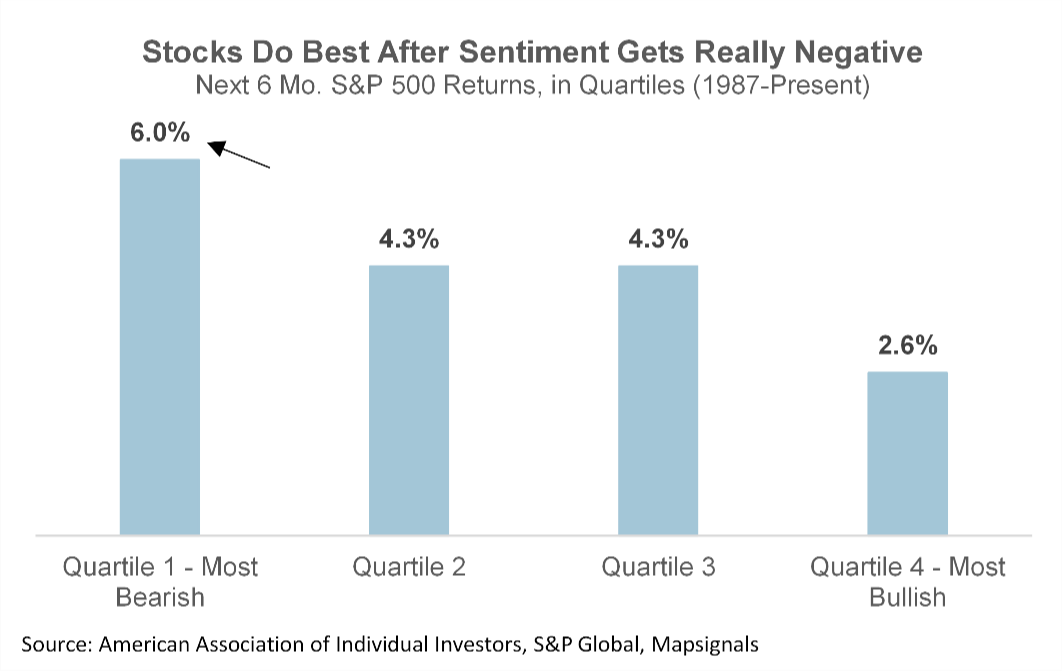 As we all know, stocks staged an epic rebound after the BMI bottomed out at 10% in March 2020. And while we didn't get quite that low this time (we got into the 30% range), the BMI fell sharply as stocks got hammered this year.

But as discussed above, we're seeing a bounce in the BMI as buying and selling have started to even out. Even wild buyers have not been able to completely take over from a momentum perspective.

Looking back over the last couple of years, we wanted to highlight heavy selling and point out how it lines up with market troughs. Thankfully, our friends at MAPsignals did the work: 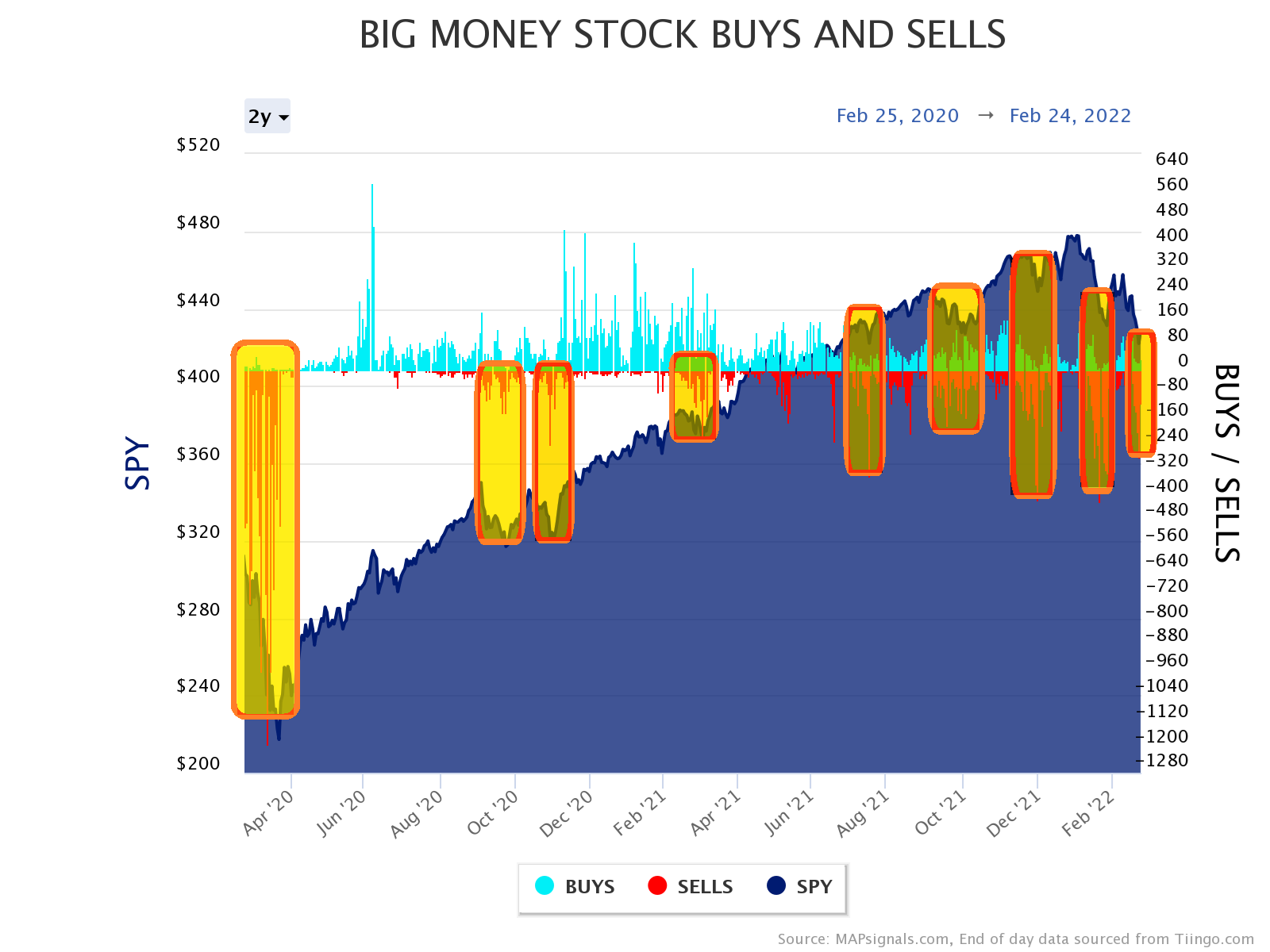 So, we could see better swings in the future. But I need to throw in an important caveat about what could transpire, and I think it was said best by Peter Berezin of BCA Research:

But let’s assume the worst doesn’t happen and your investments still matter. In that case, let’s go over a contrarian checklist of the current situation.

Thus, the Cornerstone Contrarian thinks the best time to begin to buy is when there isn’t anyone left to sell.

The Real Deal on Oil 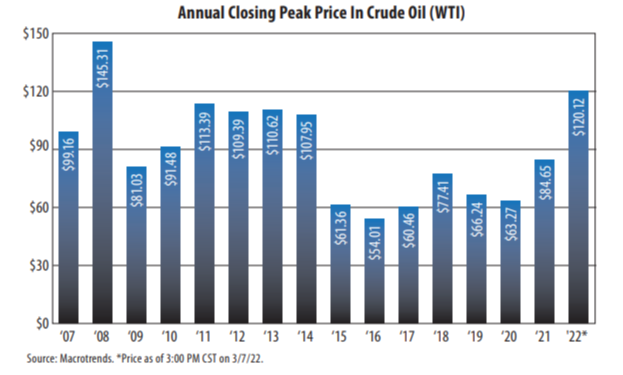 So, while it is one thing for the price of a commodity to spike occasionally, we have had instances where prices have remained elevated for years. In other words, we've been here before with the high price of crude oil, and it hasn’t historically stymied stock markets.

We especially want to point out the importance of the $95-per-barrel mark and why it's relevant today. The price of crude was around $92.66 during the week leading up to Russia's invasion of Ukraine. It rose steadily up to that point.

And while the market may have priced in the possibility of invasion, the last $20-per-barrel surge (maybe more) is essentially the geopolitically driven increase. In other words, oil prices were already rising before the invasion, then quickly spiked more because of the invasion. This is not all due to war.