Perhaps. But I know this, if March has taught us anything, it’s that investors need to be able to survive whatever markets throw at them.

Volatility felt wicked last month. But looking back on performance, the S&P 500 was up 3.3% and the NASDAQ Composite Index was up 3.4% in March.

We won’t claim complete victory just yet. Still, the macro indices’ rise has also been supported recently by MAPsignals’ trusty Big Money Index (BMI), which tracks institutional investor activity. Data through March 25 showed 239 buys and only 39 sells, as selling has almost completely evaporated in the second half of the month. Evidence is building that March is bipolar and the Ides of March are the turning point! 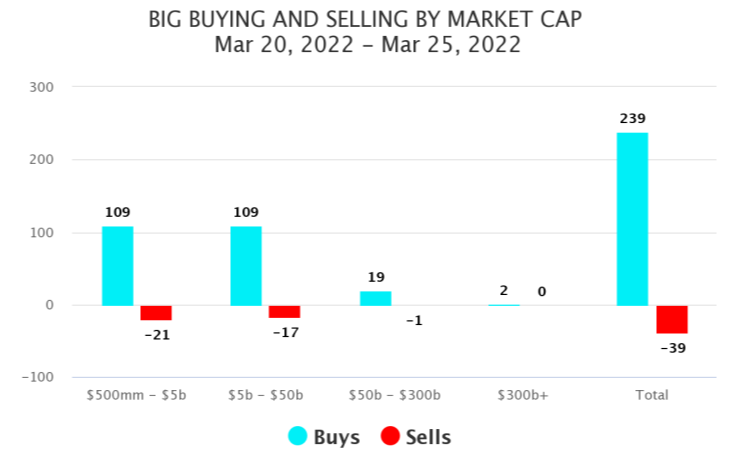 That strength continued through the end of last week as the BMI rose to 66.5% as of March 31st: 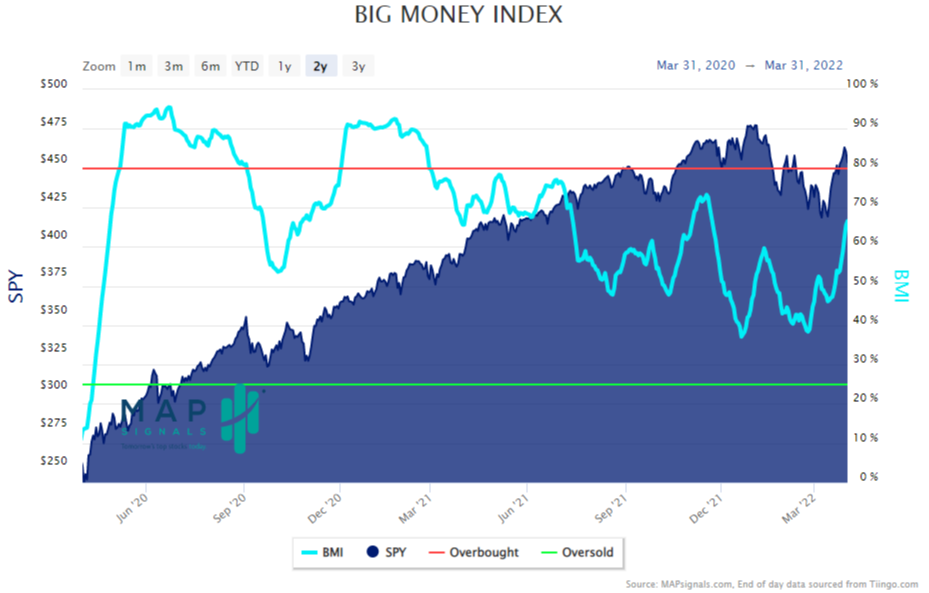 To be clear though, this BMI rise has been due to moderate buying and virtually no selling. That’s encouraging, but where it goes from here is still somewhat uncertain without extreme buying.

In other words, there seems to be a foundation building, but it’s tenuous right now. The BMI could still go either way given the state of things, but there's enough positive momentum that sellers aren't even showing up out of their basements currently.

A look at MAPsignals’ sector rankings further exemplifies the state of markets. While we see strong buying in energy, communications, and materials, most of the strength is due to a basic evaporation of selling (see “% Sell” column at far right):

Some investors appear to be invincible (i.e., like a Warren Buffett), while most get anxious at the first sign of pressure. As a result, we at Cornerstone preach patience and following the data. Using this guidance, let’s dig down to determine if stocks are finally finding their footing, or if it's just a quick, short-term spike.

The BMI has been rangebound for about six months, though the last few weeks have provided an encouraging uptrend (that’s a term for us technical nerds). An argument can be made this is simple supply and demand. There is recently more demand for stocks and exchange-traded funds (ETFs) than there is supply. This is due to there being a clear imbalance the other way (more supply than demand) for much of the past six months. 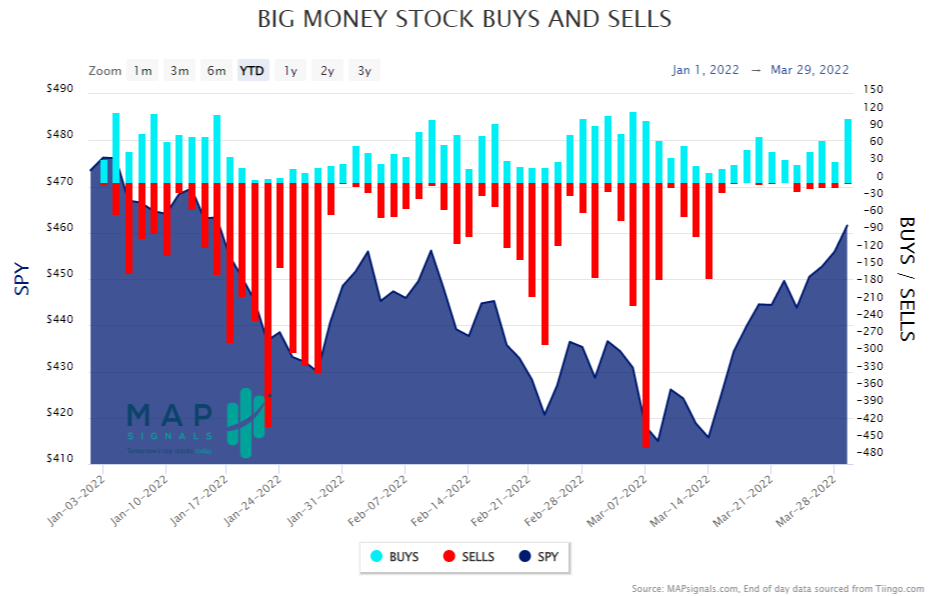 With ETFs, there isn’t as much buying as in individual stocks. However, notice the dwindling selling compared to much of 2022 already: 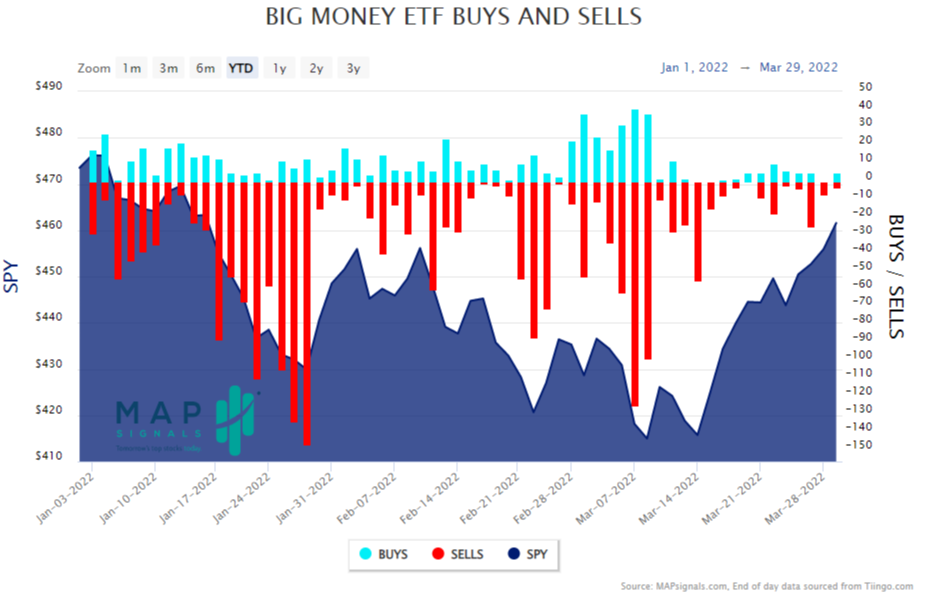 Once we have the full data from last week, we wouldn't be surprised if ETF buying and/or selling indicators continue this trend due to quarter-end window dressing by portfolio managers.

Breaking down the buying a bit, we know there’s been nonstop buying in energy basically all year. But the sector has consolidated recently, which is reflected in the drop-off of bright blue bars in the left chart below. There’s also been considerable buying in materials and utilities, making this trio the strongest sectors of 2022 so far: 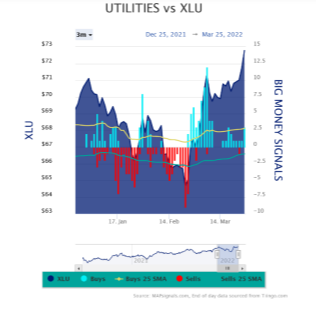 As that trio of sectors has received love from investors, technology, healthcare, and discretionary have been cast aside for the past six months. But selling is slowing in these areas. We’re starting to see some green shoots, almost like a phoenix rising from the ashes.

For instance, below is the sector buying/selling in 2022. The dominance of energy, materials, and financials is clear in the left chart:

And while it’s a small sample size, below is the buy/sell activity from two weeks ago, which indicates the storm may be passing. For the first time in what seems like ages, tech saw more buying than selling, which is great news:

To put a bow on it, we’re starting to see indications that the violent rotations out of tech and health care into energy and utilities might be calming. But the one caveat is this could just be short covering in popular beat-up sectors and profit taking in winners. Typically, short sellers cover because “the trade” is over. If there's more downside below, why even bother to cover?

Sometimes when that happens, it can spark a new bull run. But we don’t know if that’s the case yet, which is why the “all clear” can’t be issued.

Regardless, as long-term investors with this foundation being created, we’re as bullish as can be on long-term tech growth. Intermediate- and short-term investors should look for opportunities in the swings caused by market disruptions.

Here we see a main difference in tactical and strategic investing methodologies.

The tactical strategist is plotting in the intermediate term, looking for those swings. The long-term strategic investor is eyeing opportunities in damaged sectors and companies, specifically seeking plays that will be critical to long-term economic growth.

At CFS, we combine tactical and strategic approaches in planning for today’s retirement needs. It allows us to keep a long-term perspective and be nimble enough to take advantage of nearer-term opportunities (e.g., our tactical reallocations throughout the first quarter have allowed our portfolios to prosper from the current inflationary and geopolitical environment).

Along those lines, remember that as investors seek inflation hedges, stocks remain the best bet, especially commodity-related companies as well as companies that have pricing power. So, today we want to address another investment theme that can thrive due to inflation and changing markets – natural gas.

It didn’t take long for a massive deal to be struck between Europe and the U.S. to replace Russian natural gas. The basic terms of the deal call for the U.S. to supply 15 billion cubic meters of liquefied natural gas (LNG) to Europe. The goal of the arrangement is to cut Europe's dependency on Russian gas by 67% in 2022 alone and 100% by 2027.

Keep in mind that natural gas prices have already increased more than 400% in the past year. They went up another 8% two weeks ago following the new cross-continent gas deal.

This LNG investment thesis as a result of cutting off Russian gas extends well beyond Europe though. For example, China just passed Japan as the largest importer of Russian LNG. And while China will likely continue to import Russian LNG and oil, Japan, South Korea, and other Asian nations will likely opt for U.S. exports.

While China has room to take in more Russian LNG, in 2021 China's LNG needs had to be supplied by 23 countries in total. We think it's important to note that even if China imports more Russian LNG to offset reductions in European supplies, it is still expected to maintain growing U.S. imports to meet rising needs: 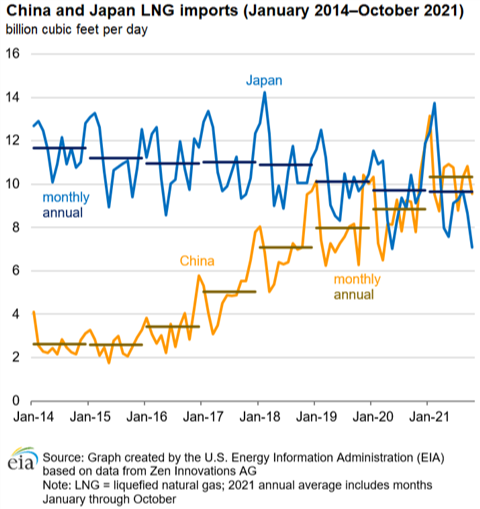 Additionally, global LNG demand is expected to double by 2040, even as progress on renewables continues to be a priority. See, even with renewables, energy production without coal falls significantly short of what’s required to power the planet.

Thus, LNG can be the bridge between coal and full-scale renewable energy.

More support for this thesis is the almost unbelievable price increases in reaction to ongoing supply disruptions:

The question now becomes the global focus amidst the transition from fossil fuels to renewable energy. Again, the process takes time and LNG can be the bridge between the two because it’s significantly cleaner than most any other non-renewable option. And recent events have made clear that supplier choice matters.

So, here’s the case for American LNG.

The world wants to transition to cleaner renewable energy supplies, but it takes time. LNG can be the bridge. It’s cleaner than coal, plentiful, and can be moved globally.

So, until the planet reaches the Utopian threshold of delivering a carbon-free energy grid and transportation systems powered by solar, wind, hydro, geothermal, and biomass, the only logical bridge to managing this long-term endeavor is through the rapid application of clean-burning natural gas…more specifically, cleaner and more climate-friendly U.S. natural gas. Therefore, from an investment standpoint, we believe this is a multiyear cycle that can provide value.