As we've touched on in the past few posts, we all want to know when the painful volatility in this current market will end.

Over the previous week we saw significant selling. Using data from our friends at MAPsignals, which tracks “big money” institutional investors, we saw only 101 buys and 1,114 sells. Like in the recent past, these readings are extreme.

Just prior to this writing, MAPsignals’ Big Money Index (BMI), which tracks “big money” activity, slid further to 43%. However, there’s been a leveling out of the BMI recently (see far right of the chart below): 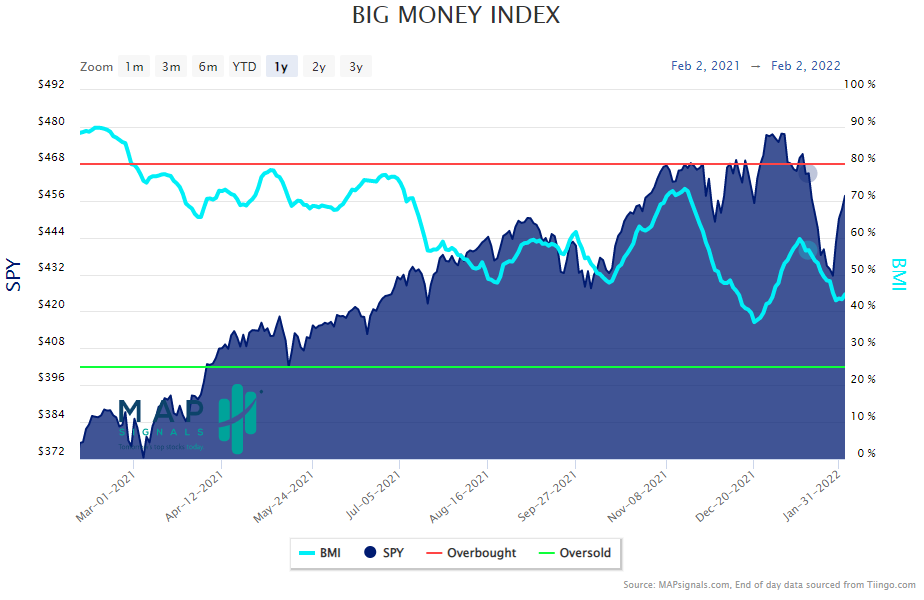 But that is due to a drying up of sell signals recently, not a pickup in buying yet, in stocks and exchange traded funds (ETFs): 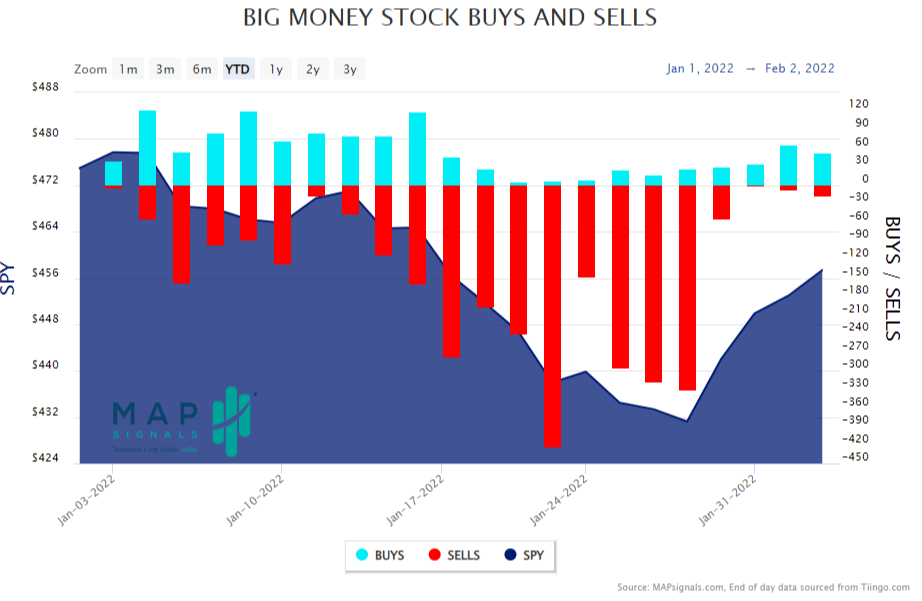 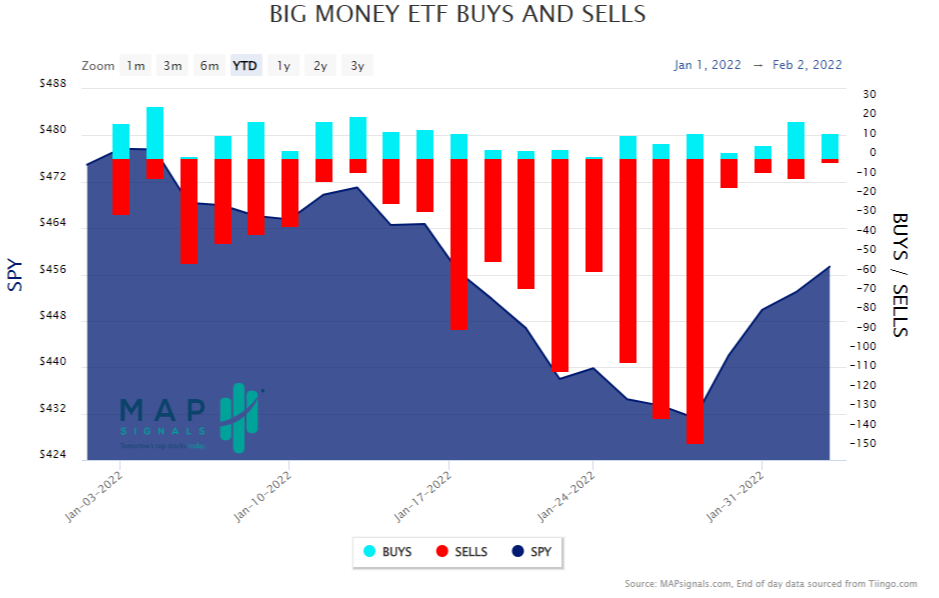 This information indicates there is a chance the past week has been the beginning of a market bottom mostly because of short covering. If that’s the case, we might still see another week or two of volatility before the true bottom is hit when we would see buying uptick significantly.

Of course, all that’s yet to be determined.

That said, today we want to concentrate on our theory on how we got here and what the historical data is telling us to expect in the short term. As we know, everything we’re dealing with centers on the Federal Reserve, which has recently created uncertainty that clobbered stocks. But our theory might be a little bit different than what you see in the media.

We, along with our most trusted research resources, think the Fed has already begun cooling things off without people even knowing it.

Remember, the Fed issued the easiest monetary policy since 2008. Easy money was amplified. The central bank knew if workers had to stay home, the economy would freeze, spiraling into a recession or even a depression. Thus, the Fed had to float the economy.

As we all know, stocks responded by rallying from depths to new highs as many of us stayed home. Speculative markets benefited from the Fed stimulus as people stayed home and bought risky assets.

In general, economic supply was low and demand was high. Combine that with loads of cash, and prices for many things shot up. Amplify all those variables and prices went WAY up, which is where we are now with 7% inflation. However, now paychecks suddenly don't stretch as far, even after raises.

How does this get fixed?

The simple answer is that the Fed must tighten the money supply by raising rates. The problem is the U.S. has issued so much debt and expanded the balance sheet so much that the Fed must be careful how it raises rates. If it goes too fast, the interest on our more than $30 trillion in national debt would become crippling.

To fight inflation, money must be removed from the system. But for the reasons just mentioned, aggressive rate raising could be highly problematic. So, what can the Fed do? We think another taper tantrum could be the solution.

If we go back to the December 2021 Fed meeting minutes, we see the mere mentioning of faster tightening sank markets. Investors slowed buying because they didn't know what the Fed would do or when (UNCERTAINTY).

So, with less buyers, stocks sink because algorithmic traders and short sellers try to force prices down. And as we have seen, asset prices are falling. Plus, people are being more considerate about spending, even shifting back to services after the pandemic saw consumers buy lots of goods, which helped create supply chain issues and drive prices up: 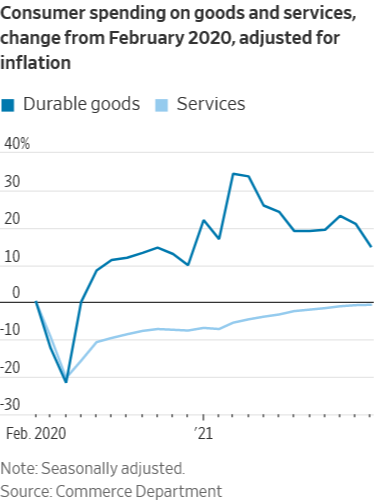 This all softens buying pressure and demand, which cools inflation, and starts reducing the money supply. And it happens without interest rates being budged.

With that understanding, what will the Fed do from here? Remember, Goldman Sachs “expects” five rate hikes and Jamie Dimon thinks “if we’re lucky” the Fed can produce a “soft landing.”

Without getting too into conspiracies here, let me remove my tinfoil hat…and say that the last bid to save the economy – the Troubled Assets Relief Program or TARP – was drawn up by Hank Paulson, who was then the treasury secretary, after he was CEO of Goldman Sachs. Also, J.P. Morgan has twice before bailed out the U.S. in 1893 and 1907, before the government had a central bank.

It’s reasonable to see those two institutions as carriers of the Fed’s message to “greedy investors.” With that message out there, the Fed’s “soft landing” becomes much more likely due to a sudden decline in asset prices (i.e., a bubble pop) at the right time.

Will those actions calm markets?

Well, earnings season is here and we're already starting to see the positive effects of blowout earnings. Volatility should slow since companies’ numbers are once again largely stronger than expected. While we may not immediately return to highs, strong earnings should quell the slide.

Keep in mind, none of the Fed’s “tightening” would happen if there wasn’t a stable economic setup underneath. Earnings are strong, and job numbers are picking up too, though that’s according to government figures, which we know trail other sources (e.g., ADP says private employment declined).

In general, companies are doing phenomenally well and that should continue. Also, stocks have survived far worse situations than tighter interest rates. In time, the market will digest the Fed’s less aggressive actions and continue climbing.

Turning to data, our friends at MAPsignals already did the work. Per the chart below, they’ve shown that since 1990 the average market troughs happened 21 calendar days after severe selling, which is defined as eight times the 50-day average. That leads us to a bottom date of around Feb. 11, 2022.

Obviously, history can only be a guide. And if last week's action is any indication, the bounce back might have started a little bit early. But the data gives us confidence on a go-forward basis that irrational volatility is near its end.