We've spent the last couple months discussing what to expect from markets pre-election and once there’s an official result. Now it’s time to bring this plane in for a landing (despite the absence of regular air travel).

For investors, the current reality essentially boils down to whether being fully invested in stocks is the right path, given all that’s happening. While it's hard to say, the market is getting warm to the idea there will be a clear political winner in short order. The fear of many is a contested election that drags on, which would cause elevated caution and uncertainty.

In fact, a “no clear winner” scenario is widely seen by analysts as the only disruptive path for equities. That said, we always say to keep in mind the possibility of black swan events, like the current pandemic.

We’ve seen two dramatic periods of selling this year. In February and March, the market declined 34 percent, and in August to mid-September, there was a drop of about 11 percent. Cornerstone took advantage by deploying much of our dry powder on March 26, 2020, and October 1, 2020, during those pullbacks, with tactical repositioning and buys in between.

But it begs the question – will there be another course correction for markets? Our best guess is the biggest risk of a third sizable pullback of 10 percent (or more) would be if the presidential election outcome is decided in the courts.

Looking at the below chart, it’s abnormally clear where the key technical levels lie. The dark, solid line at the $311.80 mark is the 200-day moving average share price of a popular exchange traded fund that tracks the S&P 500. The dashed line at $347.29 is the reading at the time of this writing. 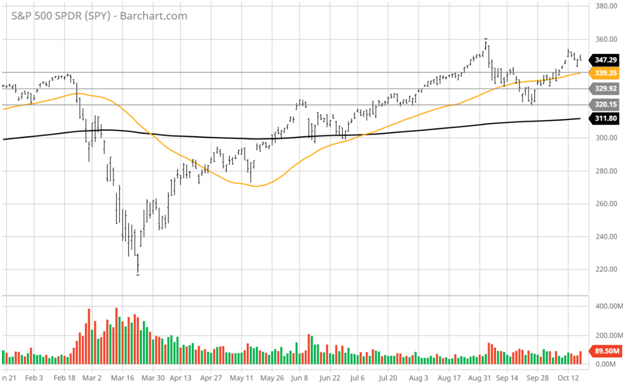 Most importantly, the 200-day moving average comes into play at $312 per share for the S&P 500. A test of that would represent about a 10-percent correction from where we are today. Thus, our technical analysis of a worst-case scenario around political uncertainty.

We also must consider though, that much of the intraday and short-term volatility that we've been experiencing is a result of half the average daily trading volume coming from high frequency algorithmic trading, according to the University of Chicago. As a result, news headlines have a great deal of influence on the market's short-term direction.

The nature of this algorithmic trading (fast and furious) could be why these corrections are so swift. Key headline words are triggers for both buy and sell programs. Topics like the pre-election stimulus package in conjunction with a few solid weeks of earnings can create firm support under the market.

Such an analysis is a slight divergence from our usual fundamentals, data-driven path. However, examining fundamentals, technicals, and sentiment helps provide a well-rounded view, especially in turbulent markets.

This is where the average investor’s sentiment comes into play. Remember, there is roughly $5 trillion sitting on the sidelines in money market accounts right now.

In the chart below from the American Association of Individual Investors (AAII), you can see bearish sentiment decreasing by 3.2 percent. This is somewhat surprising as AAII members are typically risk averse before major events like national elections. But there's a possibility that all that cash has tempered some fear. 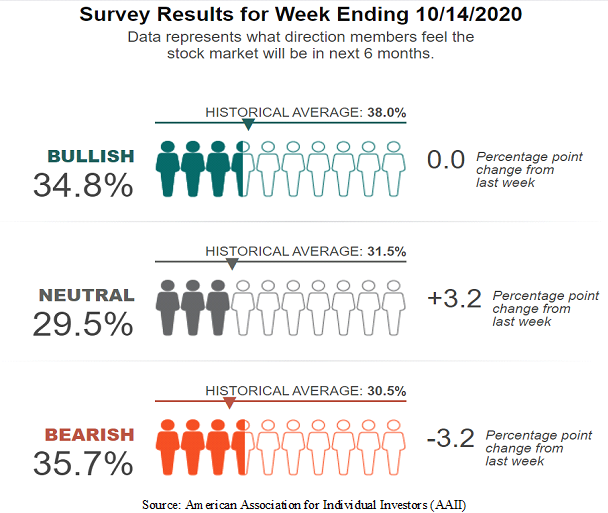 In addition, with the rising tide of earnings growth expectations, we can see politics converging with market fundamentals, technicals, and sentiment. Most AAII members come from the “sales cures all” school and should like how the most recent FactSet data and the Atlanta Federal Reserve’s gross domestic product (GDP) model show the economy is about to put up some historically strong third quarter numbers (our expectation is a seasonally adjusted annualized 33.4 percent GDP jump).

We can see from the retail sales chart below how the previous stimulus efforts produced a surge in May and June:

If another relief package makes it to the president's desk before or after the election, the market floor should rise as investors buy into the notion that more help is on the way, especially when portions of the economy (e.g., housing, auto, freight, e-commerce, and more) are already witnessing booming growth. An additional stimulus package would provide another lifeline to heavily impacted industries, small businesses, minority owned companies, and the unemployed.

All these factors combined are why it appears to us that the market will buckle only under the risk or weight of an uncertain, contentious election. But even then, a little short-term political chaos might serve some clusters well in the long run, the same as the two previous dips we had this year.

So, how does this technical and sentimental analysis fit in with our tracking of the trusted Big Money Index (BMI) from Map Signals that tracks institutional investor activity (I.e., “big money”)? Let's remember that in September, “big money” was selling, which was consistent with expectations as institutional investors like to reduce risk by selling going into an election.

But for now, as we mentioned last week, it still appears buyers have returned early. To us, this indicates that “big money” investors are more certain of the pending outcome of the election than the everyday citizen. So, they're increasing risk, which indicates confidence and certainty.

This past week, while general buying slowed some, we still saw “big money” buying in industrials, financials, and utilities:

But just because buying is back, it doesn't mean volatility is over. Still, the buys provide some comfort that the bottom won’t fall out again. A case is forming that, even though there may seem to be more volatility, sentiment is becoming more confident. We can see this reflected in the technicals (as a result of the fundamentals) and in “big money” activity.