The seemingly endless election of 2020 is finally over, resulting in President-elect Joseph Biden and slender Democratic majorities in the House of Representatives and Senate. These thin blue margins will limit many of the more dramatic policy wishes, which would require 60 Senate votes.

We’ve touched previously on possible regulatory implications of various political scenarios. Now that we know the outcomes of the Georgia Senate runoff elections, we can look with more certainty at what to expect during President-elect Biden’s upcoming term.

So, from an investment standpoint, we must consider what will be done tax-wise and what is the likelihood of it passing. Here are six possibilities.

First, it's almost certain the top tax rate on ordinary income will head back to 39.6 percent. This would be a return to the top rate under President Obama.

Next, we believe the limit on state and local tax deductions (so-called SALT deductions) is likely to double from its current $10,000 cap to $20,000.

Number four is where things get a bit trickier, as the Biden campaign has proposed eliminating the step-up in basis at death for inherited assets. Currently, an inherited asset is revalued for tax purposes when it transfers ownership (a step-up in basis) in an effort to minimize capital gains taxes. Removing this revaluation would likely produce sizable tax bills.

But as we’ve discussed before, tax professionals around the country will resist this strongly. In many situations, it's almost impossible for children to find out what their parents or grandparents paid for an asset. So, we expect Congress to allow less money to be passed on tax-free via a reduction in the estate tax exemption from the current $11.6 million to somewhere around $6-7 million.

Fifth, the Biden campaign may also start treating capital gains and dividends as regular income for those earning $1 million or more. The issue is, at a 39.6 percent rate on this income (which really is a double tax), it would push rates to levels we haven't seen since the Carter administration. But this is where we believe the slender majorities would come into play and make such policy nearly impossible.

Rather, we expect maybe a capital gains tax rate jump from the current 20 percent to 24 percent. Why 24 percent? It’s because, combined with the 3.8 percent Medicare tax, the effective federal rate would then be close to 28 percent, which is where it was when President Reagan left office. Remember, optics do matter.

Lastly, one big proposal that has gotten a lot of media publicity, but one we believe is likely to fail, is applying the Social Security tax to earned income greater than $400,000. The reason we think this will fail is Social Security benefits or taxes cannot be done through budget reconciliation and we doubt support will reach the necessary 60 Senate votes to break filibuster.

Please know, we don’t mean to scare anyone. It’s unlikely any of these changes would be made retroactive to January 1, 2021, especially with unemployment rates still high and a slower economic recovery due to COVID-19. Tax modifications would more likely be delayed until 2022. Still, we’re watching the situation carefully now to prepare for the future.

One would think stock and bond markets would be more worried with the high drama of the Capitol being overtaken by insurrection, violence, and death, along with more impeachment proceedings. But markets are not fazed. In fact, the Russell 2000 went up 4 percent the day of the Capitol Hill violence.

Also shrugging off the drama was the Treasury market, which recaptured 1 percent on the 10-year note, closing the week at 1.12 percent. In other words, there was no safe haven run by investors into Treasury bonds: 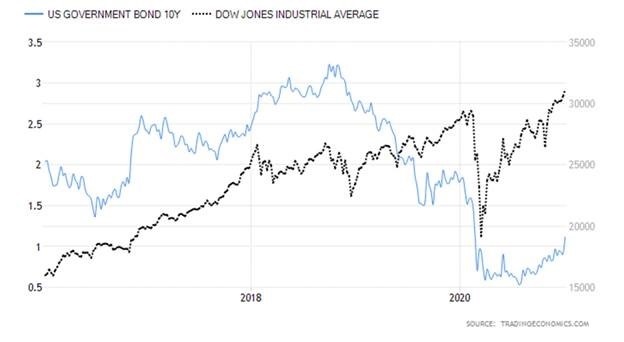 Furthermore, there is no pressure in the high yield bond market, which is incredibly sensitive to economic activity, despite accelerating pandemic numbers and the upheaval in Washington D.C. In other words, junk bond markets rightly or wrongly assume that with two vaccines against COVID-19 now and more coming, the pandemic will be winding down this year.

In the short-term though, Map Signals’ trusty Big Money Index (BMI) is heavily overbought, which we know can last a long time. But at some point – likely in the near-term – the pressure will release and usher in a correction.

Markets have been overbought for more than five weeks now, and as we've discussed previously, the data told us to expect this. Recent flattening of the BMI indicates that buying is exhausting itself: 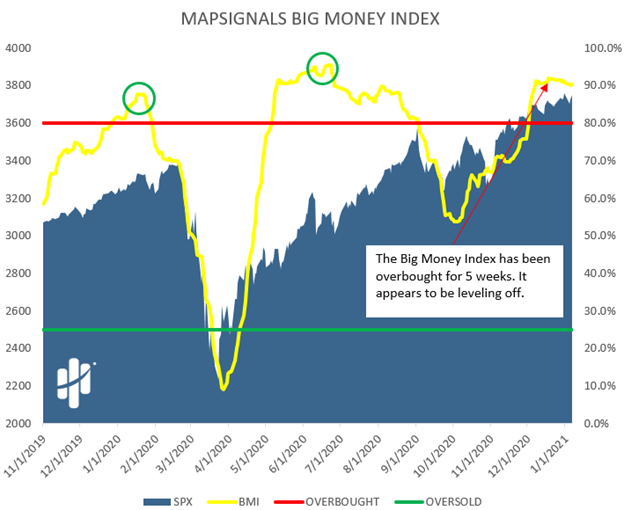 Additionally, even as Capitol Hill was marred with violence, we saw immense buying that week as 10 out of 11 sectors saw more than 25 percent of their “universes” bought in a massive way: 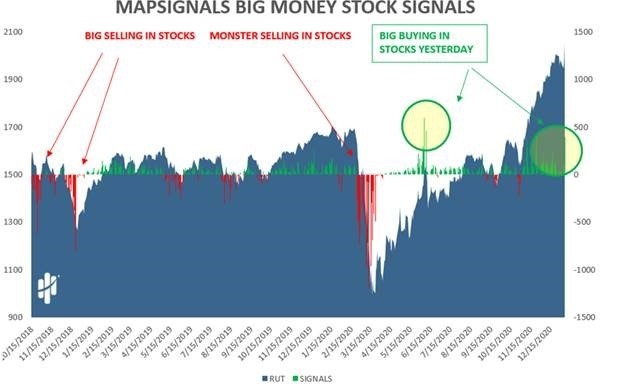 Zooming in on that far right circle, we can see the large buying on the day of the Capitol Hill riot: 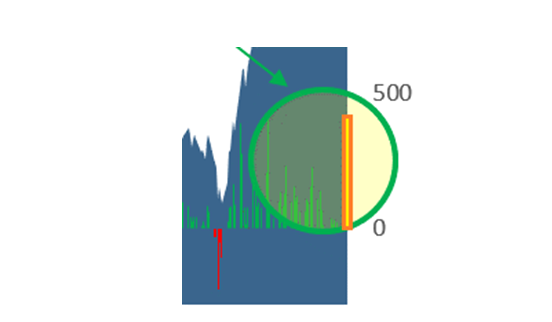 And as readers of this blog know, our last indication of intense market overheating is when exchange traded fund (ETF) buying reaches epic proportions, despite an extremely overbought market. Such behavior historically signals a near-term bear run. And here it is: 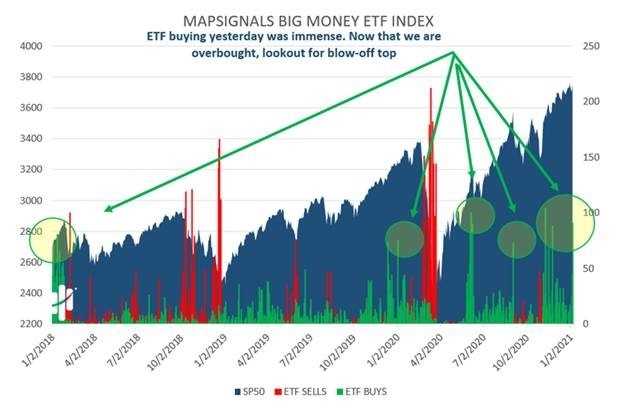 We highlight this so our readers understand what to expect and be educated enough to not overreact to short-term, necessary market corrections. As mentioned above, even with these signs of a near-term pullback, there are no intermediate- or long-term signals of a run to safe havens. Remember, earnings and year-over-year comparisons should be great in 2021. Combine that with the absence of a Treasury bid run, and it indicates the market's intense rise in the face of negative news foretells of an upcoming expected correction that is quick in nature.

Right now, extreme greed is in the air. But that doesn’t change our outlook for the rest of the year. We expect markets to experience ebbs and flows, and we’ll stay committed to following the data.