With our first post of the year, we want to address a question that’s in the news (we’re frequently asked it too) – in 2021, how will the market hold up, based on projected corporate earnings and revenue?

This very question was asked December 26, 2020, in a Wall Street Journal article about COVID-19 forcing businesses to change. The Journal piece showed how businesses have propelled their future plans, digitizing operations to gain efficiencies and, thus, larger profit margins. The article also lays out how the pandemic accelerated the inevitable, triggering a huge reset in the U.S. labor pool.

One example of forward movement we found interesting was Nationwide Mutual Insurance Company:

“Shortly after the pandemic hit, Nationwide had 98 percent of its 28,000 employees working from home. The initial impetus was safety, but chief executive Kirt Walker said it accelerated pre-existing plans to rely on virtual operations. Before the pandemic roughly 15 percent of employees worked from home and the company now plans for half to eventually do so permanently.

Some companies, Mr. Walker said, wrote off 2020 as a lost year. ‘For us it was an accelerator, and got us closer to some long term objectives.’”

In our opinion, Nationwide isn’t alone.  It’s among a great majority of businesses moving through a fast-forward transformation, producing more goods and services with fewer employees and onsite location services. We think most corporate business models leapt forward about five to 10 years because of the technology advancements that occurred in 2020.

As part of that, we're seeing more evidence that remote labor could be a permanent fixture in the employment landscape, at least in some capacity. Many firms have embraced it wholeheartedly, with some even scrapping geography-based pay scales in favor of compensation systems that ignore employee location.

But please don’t misunderstand, the work-from-anywhere movement isn’t a comprehensive revamp of modern employment. Remote work has limited efficacy in areas like manufacturing, healthcare, construction, logistics, and many more.

Still, this evolving “new normal” will have a huge impact on many industries and services.

So, what does this phenomenon mean for investors? Well, if efficiency and productivity gains lead to profits, by the third and fourth quarters of 2021 there should be a sharp increase in S&P 500 earnings, shattering current estimates.

We’ve cited notable market analyst Ed Yardeni before in this blog. He and his research team have certainly earned our admiration. In the below table, you see Yardeni Research’s S&P 500 earnings forecast for 2021 of $170 per share is only slightly higher than the broad analyst consensus of $169.18.

However, note Yardeni’s 2022 forecast of $195.00 per share is a bit shy of the $197.20 analysts estimate. Typically, Yardeni tends to be more bullish than the analyst community, but we think lasting effects of the pandemic have probably kept a lid on his usual optimism.

Additionally, major news outlets have warned of the overvaluation of the current market. You’ll often hear how the S&P 500 is trading at 21.7 times earnings (based on earnings of $170 per share in 2021), which is historically above average. But perhaps the market is outsmarting analysts and commentators again because the big year-over-year momentum in earnings forecasted for the second quarter of 2021 (of around 43 percent) carries into the third and fourth quarters as well: 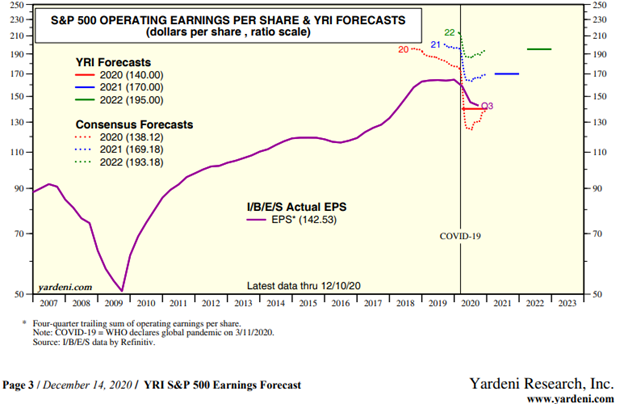 It's our opinion that analysts and the media community lived in a foxhole somewhat for most of 2020, though that is certainly understandable given all that unfolded. Still, this bunkered mentality was exposed and proven incorrect when second and third quarter S&P 500 revenue and earnings handily exceeded consensus estimates.

We think this same community could again be underestimating how much productivity and efficiency is being generated by remote work. After all, we don’t hear about these gains much compared to the backdrop of increased commercial office space vacancies and lost jobs.

But the thing is, the world has changed – probably permanently. Many officegoers will never return. And many people will need to find new roles in a changing economy. These are the gears of capitalism at work. For some, they’re vicious.

As such, investors may need to change how they’re evaluating businesses. Speaking strictly from an analytical standpoint, technology is pulling forward efficiencies that are cutting out and replacing “fat” in human capital and physical capital. As a result, profits for many (if not most) of the S&P 500 companies are likely to explode higher in the second half of 2021: 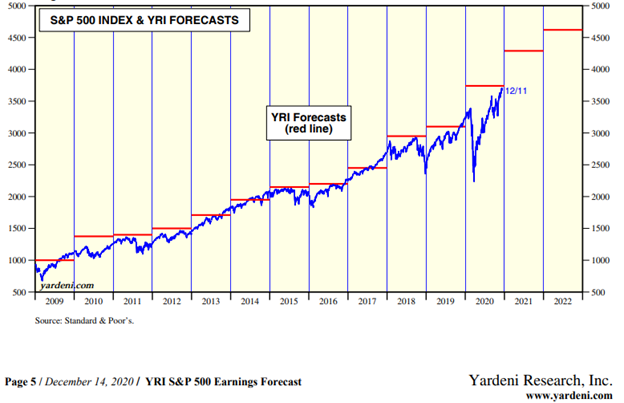 There’s a chance the stock market is trading on the notion that $170 per share in S&P 500 earnings forecasted for 2021 might be light compared to the final 2021 earnings reported in the first quarter of 2022. Current estimates are based on an aggregate operating profit margin of 11 percent for 2021 and 12 percent for 2022. But what if those margins are closer to 13-15 percent due to these newly gained efficiencies?

If so, we can reliably pull forward 2022 earnings estimates into this year, which would easily support the more bullish market targets and consequently reinforce the hypothesis that the market may not be overheated. Rather, it may be simmering and on its way to a frothy boil of positive profits.

Wall Street’s top analysts got a lot wrong last year, which again is understandable given the uncertainty unleashed upon the world. But who’s to say they can’t be wrong this year too? It’s food for thought.