A Silver Lining Among the Oddities

This blog has covered some technical topics lately. We’ve mentioned winning in range-bound markets,  covered Federal Reserve policy ramifications, and used data to show budding normalization across the economy. We also laid out what we think will occur over the short and intermediate terms.

But now we are about to enter the heart of earnings season, when daily earnings reports dominate the headlines and drive markets. So it’s appropriate to pull back and seek a wider perspective.

Well, the trusty Big Money Index (BMI) from our friends at MAPsignals is a good place to start. It hit oversold territory for the fourth time this year (more on that later). Selling pressure has driven the index downward since August, shortly after its rapid ascent to overbought territory.

Economic news created more downward action that weighed on stock prices. As a result, valuations continued to compress dramatically. As we near earnings reports, it will be important to focus on companies with positive forward looking earnings guidance.

But the bears want more blood while the bulls are brushing this off.

As a refresher, the BMI went oversold on Sept. 30. A quick bear market relief rally followed, and by Oct. 4, the S&P 500 closed 5.8% higher than the Sept. 30 low. But on Oct. 11, a better-than-expected jobs report created confusing chaos and forced markets lower.

This world is upside down it seems sometimes. That jobs report is an example where bad news is good and good news is bad. In this case, the jobs report solidified investors’ perceptions that the Federal Reserve would continue its aggressive rate hikes.

An additional sign of weirdness was the one-day rally in the S&P 500 of 2.6% after another bad inflation report. Perhaps people thought peak inflation is done (again) and that the Fed would ease off? Either way, it’s another example of bad news being good for markets.

The last couple weeks’ volatility has made investors anxious, to say the least. But when recent “big money” selling is compared to the past six months, what’s occurring now isn’t as bad as what happened in May, June, and September. (finally capitulation?) There are red bars now, but they’re not diving as deep as before: 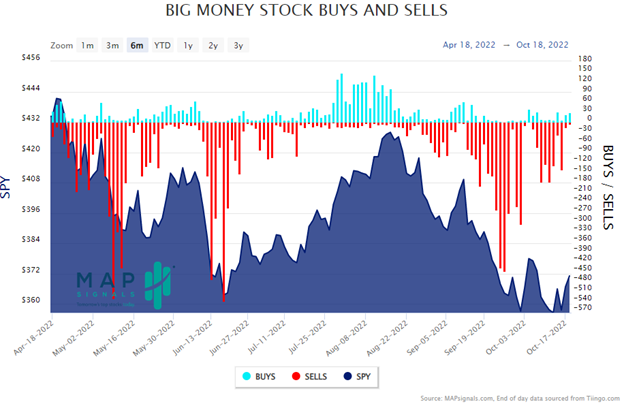 According to our data and data from our friends at MAPsignals, the strongest sectors are still energy, staples, and health care. Many of these companies are doing well fundamentally right now, which reinforces our thesis on owning stocks of companies with strong fundamentals, growing dividends and free cash flow.

It’s also important to note how an incredibly rare event just happened – the BMI went oversold for a fourth time in 2022, all since May: 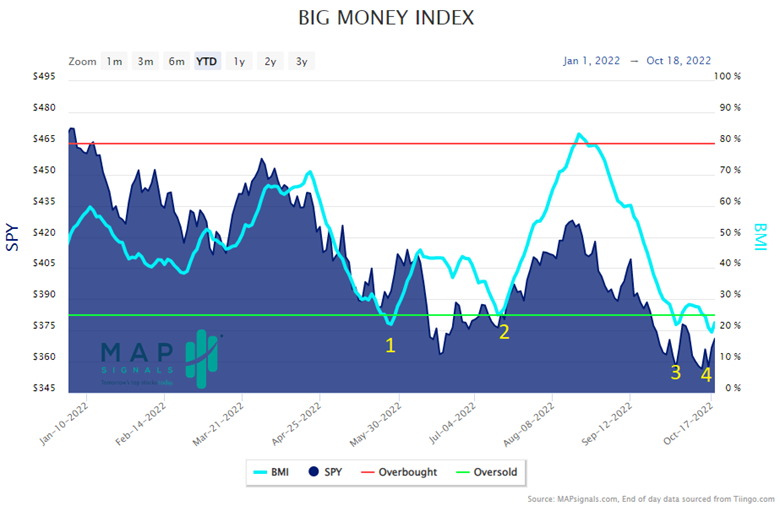 Thanks to the hard work of our friends at MAPsignals, we know this doesn’t happen often. In fact, the MAPsignals team used its research to highlight three key points we found quite interesting.

First, the BMI has been oversold more than this only once. It happened during the financial crisis in 2008, when the index went oversold six times.

Second, while the BMI has hit oversold levels four times so far in 2022, it’s only been oversold 4% of the time this year when looking at the index relative to total trading days. That’s eight days out of 198. Conversely, when the BMI went oversold six times in 2008, it remained oversold for 32% of the time (81 of 253 trading days).

Lastly, since 1990, the BMI has been oversold 3.8% of the time. See how rare oversold territory is? That’s only 308 days out of 8,236 total trading days and in line with 2022 oddly enough. The table breaking down the oversold instances is quite telling: 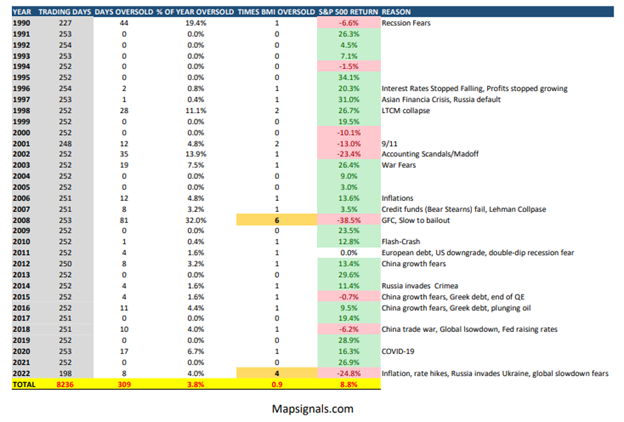 These are some incredible findings from the MAPsignals research team. We thank them again for their work.

Our take on this information is that yes, four oversold instances so far are somewhat crazy. But when you consider all the volatility and uncertainty, they become less surprising. Plus, we’re oversold much less than we were in 2008, especially considering the percentage of time the BMI has remained oversold, which is only 0.2% above the average time the market has spent oversold since 1990 (3.8%).

To us, that doesn’t seem too abnormal historically speaking, even though this year has been adventurous to say the least due to all the volatility. Also, we can be thankful this year hasn’t been like 2008, which was a bloodbath that saw the S&P 500 lose 38.5% of its value.

In other words, things could be much worse.

Also notice in the table the reasons attributed to market weakness. There almost seems to be a pattern of cyclical geopolitical and economic calamity (with a pandemic mixed in there too). History does repeat itself it seems.

We should all take confidence from that fact. It is the silver lining because we’ve been in situations like this before. None of this new. More importantly, as has been demonstrated in the past when we’ve been in perilous situation, we survived and then went on to thrive.