Win at the Margins

Since we began this blog, our clients and readers have known that we’ve remained bullish. Whether it was the Greek debt downfall, Brexit, elections, or anything else, we’ve maintained a positive stance, especially when it came to our fair market valuations.

But even as we held out some hope that monetary policy would be managed effectively, around the middle of the year our inner bear awoke. We discussed how the S&P 500’s old high of 4,797 was somewhat of a ceiling in the near- to intermediate-term outlook, at least until we had a recession or there was a realization that the Federal Reserve had indeed pulled off a “soft landing.” In the meantime, that meant we would be in a trading range where bear market rallies would come and go until one of the two aforementioned situations took place.

Well, with the Fed’s hawkish language and the Bank of England’s commitment to interest rate hikes, it seems the “soft landing” option is off the table. So, there’s a higher probability we’ll see a recession arrive sometime in late 2023, as we mentioned in the spring.

Why a recession? It’s because the Fed and other central banks around the world have made it clear they will tighten as much as needed to control inflation and get actual rates down towards target rates (because they were late to the party). That will probably send the economy into recession. All the hawkish rhetoric backs this up.

But as we said earlier this year, stocks could easily rally in the short term from then-current levels (the S&P 500 was at 3,675). For a quick historical lesson, the S&P 500 rallied up to a closing high of 4,305 in mid-August before dropping to 3,693 as of two Fridays ago.

This is what’s called range-bound trading.

Essentially, markets rise and fall within a range defined by upper and lower bounds, rather than break out and rise as they have for much of the past decade. In these environments, there are mini rallies and slumps occurring regularly between the range limits. In short, monetary and fiscal policies seem to be pushing markets toward a period of being range-bound.

As for the near- and intermediate-terms, let’s be clear – there could be another bear market rally or multiple bear market rallies in the future. This is the definition of being range-bound. Here is an example of range-bound trading from 2017-18 in chart form: 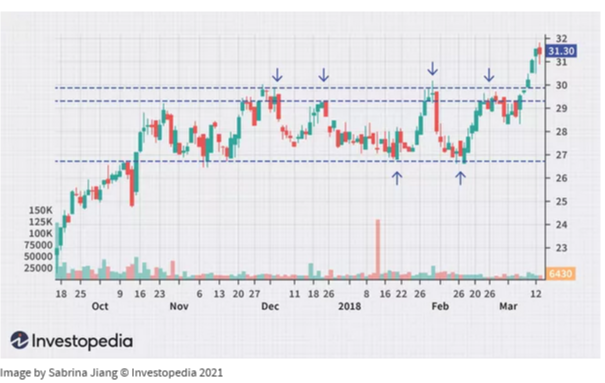 But what is the current range? And how are we determining it?

Well, we rely on our trusty capitalized profits model of fair market valuation. This analysis takes the government’s measures of economy-wide corporate profits and discounts them by the 10-year Treasury note yield to determine a fair value for stocks.

About a week ago, the 10-year Treasury note finished right around 3.70%. Using our capitalized profits model, that suggests the fair market value of the S&P 500 is about 3,600. To be clear, the 10-year yield will determine the bottom end of our range.

A few weeks ago, we talked about the two-year Treasury note as a short-term indicator. Now we're talking about the 10-year Treasury from a fair market value standpoint to try to peg our range-bound floor. A big risk for stocks is if the 10-year Treasury yield continues to rise. Hopefully it doesn’t jump too much more. But if it does, it simply means we don’t have our bottom bound of the range set because it hasn’t settled yet.

Please understand, this isn’t meant to cause fear. We’re attempting to set expectations between now and the middle of 2023, understanding that there will be rallies within this range.

If you're a long-term investor, as we are, you’re not looking to time the market anyway. Thus, the message is that we can't be shy about continuing to buy stocks in normal dollar-cost averaging intervals as well as undertaking normal rebalances to set the best prices on the stocks and sectors we own.

This is our plan going forward for the intermediate-term – manage the portfolio to win at the margins. That should help set us up for a head start when markets and economies rise again.

Surviving the day-to-day in the current market environment is proving increasingly challenging. But there are useful datapoints to help paint a clearer picture.

Obviously, we’ve all felt the capitulation happening in markets. It’s reflected in MAPsignals’ trusty Big Money Index (BMI), which measures “big money” investor activity. As of this writing, the BMI is at 29.2%, which is a hair above oversold: 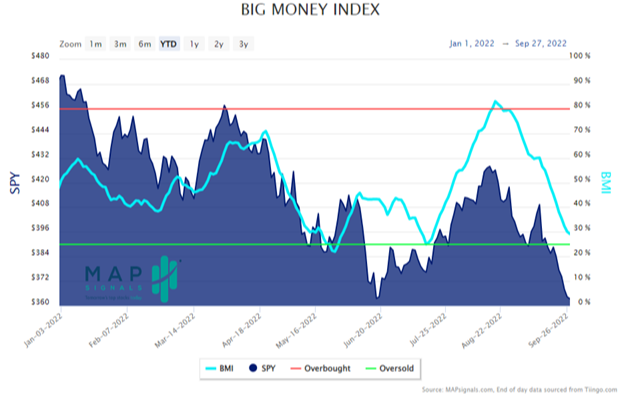 However, we’ll likely reach oversold levels this week. If/when that happens, it should pave the way for another relief rally, like we saw in the summer. That would be harmonious with the usual midterm election year bump markets experience, though nothing is guaranteed.

The BMI and sources like it are what we’ll use to help us win the margins in the short term and establish a stronger cost basis overall. A pattern could emerge where buying occurs on oversold instances, followed by relief rallies and rebalancing, where gains could then be taken off the table. In addition, even as markets head lower or higher from here, high quality, cash-rich names will continue to be the best of the worst.

We all know the current mood is glum, much of which is due to Chairman Powell’s tone from his comments on Sept. 21. Then he telegraphed higher rates and said painful times were ahead for many Americans. This message has since been reinforced by the Bank of England.

Going back to August, we warned everyone that September would probably be volatile and bad. Since then, the SPDR S&P 500 ETF Trust (SPY), which tracks the S&P 500, has dropped 12.5% in value. SPY’s Aug. 16 peak came after the BMI went oversold on July 14. This reconfirms the BMI being helpful in terms of short-term volatility.

As mentioned, the BMI has been plummeting since mid-August. It’s probably going to fall more too. You can see in the chart below how selling has picked up since Chairman Powell’s statements and has been approaching this summer’s levels: 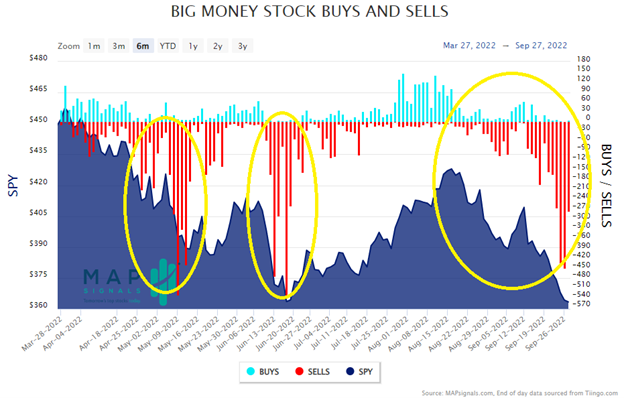 But remember (as veterans of this blog know), the deep selling indicates we're getting closer to a near-term bottom. Also, look how this has occurred three times in the past six months. It will probably continue a few more times over the course of the next nine months or so.

Hitting bottoms doesn’t necessarily mean an “all clear” signal, but they're good indicators for when to rebalance. It’s a bit of a change in philosophy from our regular quarterly rebalancing because we’ll likely be more active in managing our portfolios. But we think this is the way to successfully navigate volatile, range-bound markets.

We also think it's important to point out how in this most recent selloff, significant bonds and bond exchange-traded funds (ETFs) are being sold as interest rates continue to rise. It’s not just stocks being shown the exit door. That reinforces the theme of 2022 – there's no place to hide.

This is additionally supported when you look at the percentage of “big money” sells from sectors within the equities universe since Sept. 1. Except for utilities and energy, there's an abnormally even disbursement of selling pain. Even with the relatively even disbursement, you can see that utilities, energy, health care, and staples are the best of the worst: 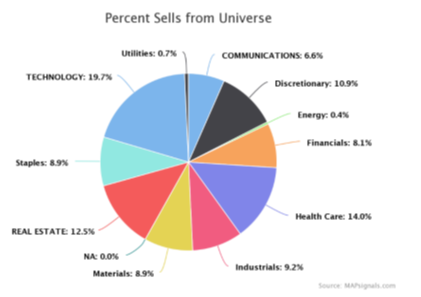 Additionally, Bespoke Research put out a piece highlighting how large-cap and dividend-paying stocks have been the most resilient again (i.e., the best of the worst) since mid-August. That would characterize the utilities, health care, and energy sectors.

Our friends at MAPsignals show the same. Their data reaffirm Bespoke Research’s findings, where over the past month of pain, utilities, health care, and energy have been the most resilient sectors, as well as the strongest sectors to date:

That reconfirms our thesis and shows why we've been overweight in these areas since the start of the year.

Over the last month markets have been struggling to digest the uncertainty that was, ironically, caused by Chairman Powell's certainty of future pain and a “hard landing,” which was our worst-case scenario for the end of 2023. But remember, while near-term volatility is difficult to navigate, investors win over time by owning the companies with the best fundamentals and “big money” support.