Consolidation, Summer’s Broad Buying, and the Rest of 2022

After weeks of significant “big money” buying, we recently saw some market consolidation play out (as expected) in the “big money” buy and sell signals from our friends at MAPsignals. During a volatile week, the consolidation started in the back half of August as selling increased after going briefly overbought: 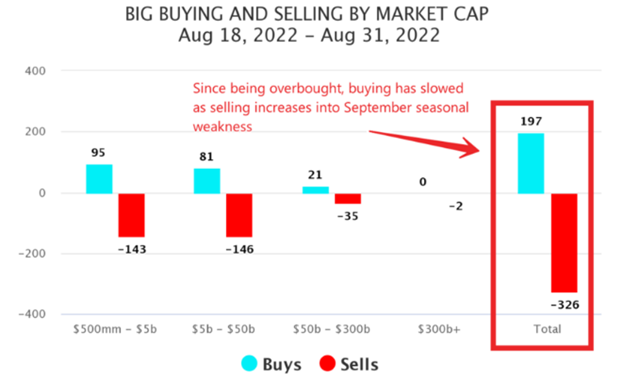 This action meant there’s been a lot of red in the last 10 days or so. Psychologically, red generally conveys a negative emotion, while on the other hand, green tends to make us feel happy. These visceral reactions to colors are at the root of behavioral finance – many markets use red to indicate losses and green to indicate gains. This emotional response is so strong that somebody actually studied it and published the results in the July 2014 edition of the Journal of Behavioral Decision Making.

Imagine if we were all colorblind. It would remove the single biggest impediment to investment success – emotion.

We can imagine many people started feeling uncomfortable and emotional again over the past 10 or so days, especially after the year the market has had already. But keep in mind that markets ebb and flow. After big rallies like we just had, it’s natural for some consolidation to occur, especially this time of year.

This shouldn’t be a surprise to our readers or those who follow MAPsignals’ Big Money Index (BMI) since the BMI went overbought on Aug. 17, indicating that the big ramp up in buying was unsustainable. While durations vary on how long the BMI will stay overbought, our readers know we can often stay overbought a long time. However, that wasn’t the case this time as the BMI left overbought territory on Aug. 23: 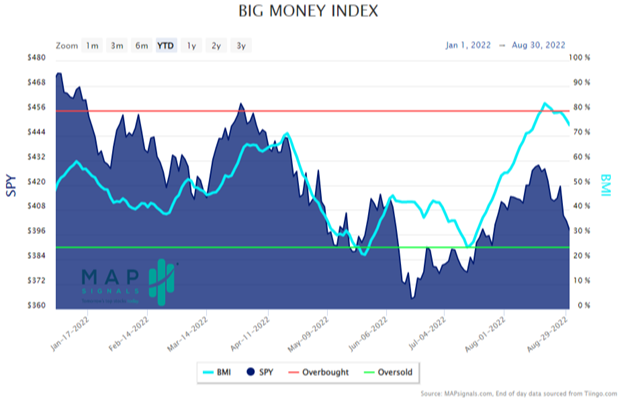 Since the news is promulgating it, we must answer the question – is this a bear market rally, the beginning of something bigger, or are we headed lower?

Let’s start with the near-term. Our friends at MAPsignals did the heavy lifting to showcase stock performance going back to 1990. Historically speaking, September is tied for the worst performing month: 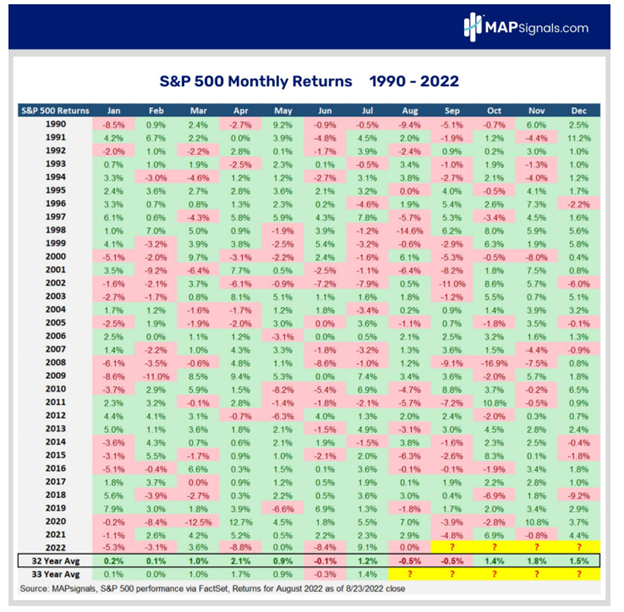 This historical data supports our thesis that we should expect even more market consolidation as we get move into the end of Q3.  In other words, it might be time to buckle up for an emotional, red September to close out the third quarter. 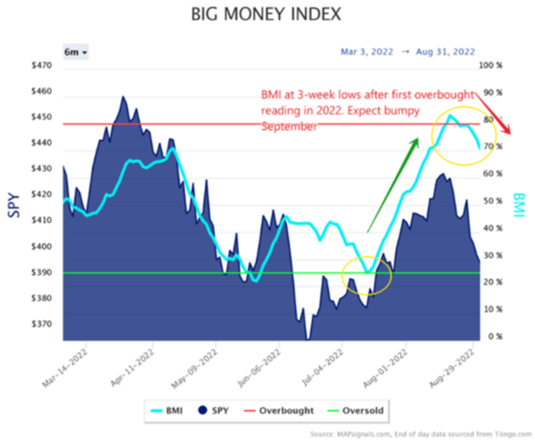 But look at the last three months in the above table. The last quarter is typically a good one.

What about in an election year though? Sometimes politics and markets don’t mix well. 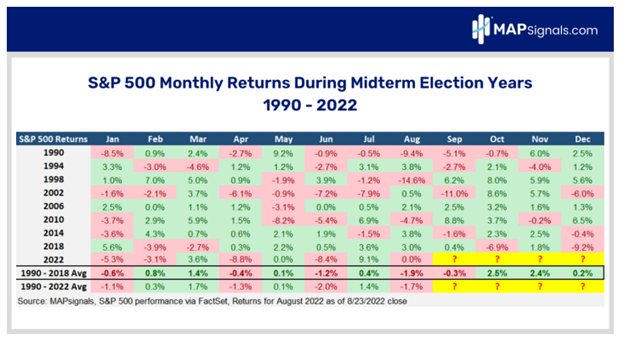 While September may be a disappointing quarter closing month, history is at least on our side for optimism in the fourth quarter.

That said, we wanted to examine the overall strength of the most recent rally by looking at the buying and selling activity in “big money” from a sector basis. Since July 15, there has been lots of buying. But even more interesting is that money has flown significantly into small- and mid-cap stocks. That is an indication of an appetite for overall risk.

It’s true buying can be washed away along with investor confidence quickly. We’ve seen that with the violent sector rotations of the past few years. But as you can see in the following charts, when we look at the most recent buying and selling across all sectors, it's rather uniform.

In other words, money is flowing into sectors broadly, not from one to another. The strongest sectors in this most recent rally have been technology, discretionary, and health care: 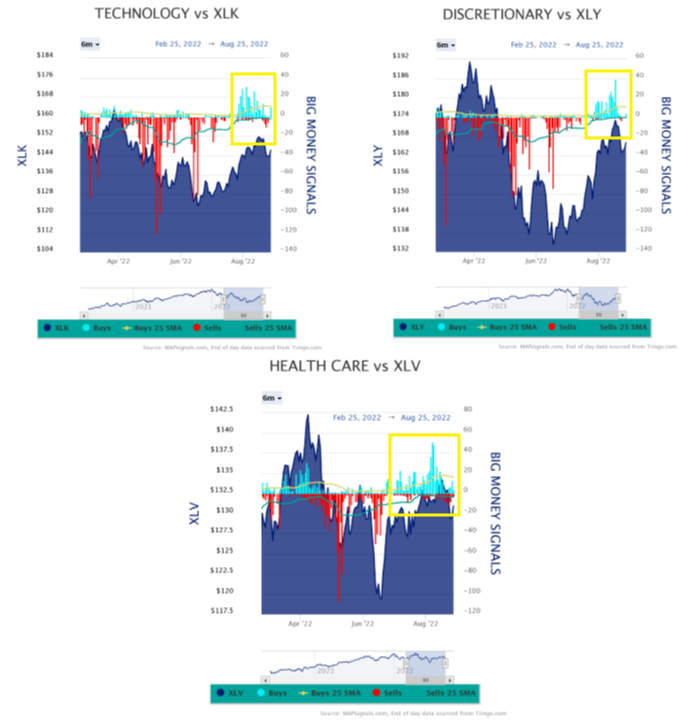 Those sectors have been followed by industrials, financials, and staples from a buying strength standpoint. Interestingly, even when examining the “weaker” sectors like utilities, materials, and real estate, we still see solid buying action: 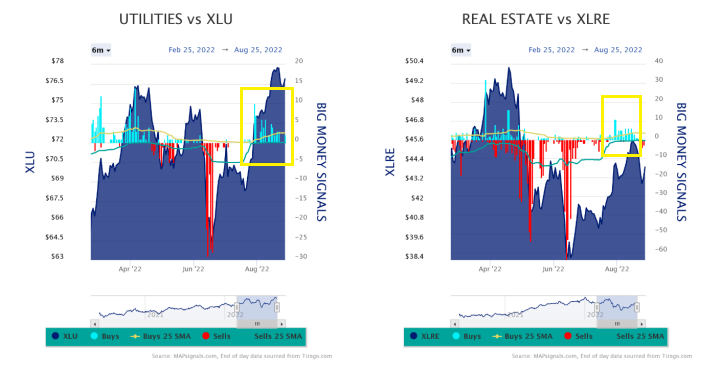 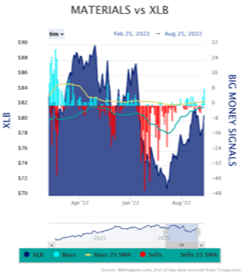 This broad buying indicates there is a stronger base to build off after this consolidation, moving into the fourth quarter. That’s contrary to much of the popular media narrative of this being a bear market rally.

When taking this all these sectors together, “big money” has been buying stocks in droves since mid-July, leading the market higher: 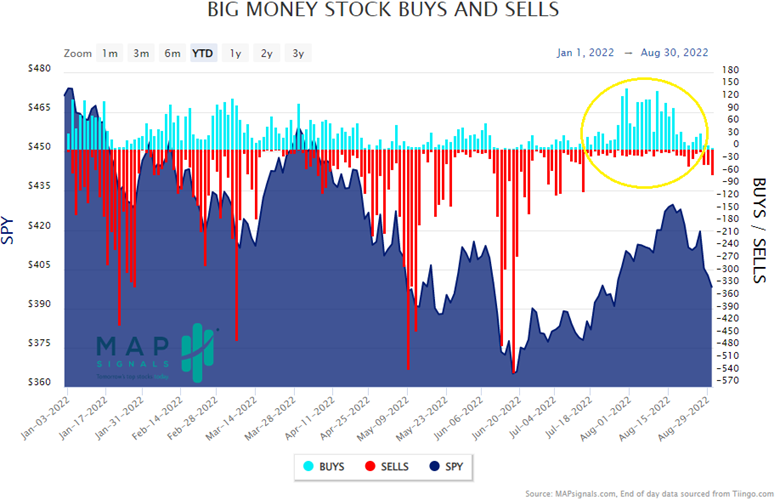 With that in mind, the past week’s red doesn't look so bad in the short-term because the selling followed a strong buying period where stocks basically went straight up for a month. And remember, even markets need rest sometimes. A monthlong buying sprint can’t last forever. Like the human body, markets need to rest after lots of exertion.

So now, in our opinion, the main aim is to hold tight through the end of this quarter. History shows greener pastures often bloom late in the year. In the meantime, let’s do our best to be colorblind and not get emotional. That can lead to poor decisions over the long term.