The last couple weeks we’ve talked about winning at the margins and identifying areas of hope. We now want to turn our attention to data to understand the landscape better as the third quarter earnings season is kicking off.

We’ll start with recent economic reports. They continue to undermine arguments that the U.S. is already in a recession (remember, our expectation is that if there's a recession, it'll be in the second half of next year). Here are four recent examples of non-recessionary performance.

On the job front, there was another strong report. Including recent data, payrolls are up at an average monthly pace of 420,000 so far this year.

Also, voluntary job leavers among the unemployed reached 15.9%, which is the highest rate since 1990. This is considered a positive from a labor perspective because people don’t leave their jobs unless they’re optimistic about getting a new one and earning more elsewhere.

Another positive datapoint is the ISM Services Index came in at a robust 56.7 for September. That’s above the consensus estimate of 56.0. A reading more than 50 indicates expansion, while less than 50 indicates contraction. Also, while the ISM Manufacturing Index declined to 50.9, it is still more than 50, indicating expansion. The switch from goods to services continues, yet manufacturing is still growing. Meanwhile, services are growing at a big clip and remember that the services portion of the economy is much larger than manufacturing.

Tying this all together, our models show growth of roughly 3.0% in gross domestic product (GDP) in the third quarter. In the chart below, you can see the Federal Reserve Bank of Atlanta’s GDPNow model has increased significantly with our estimate and is now tracking at 2.9%, essentially ending two quarters of decreasing GDP: 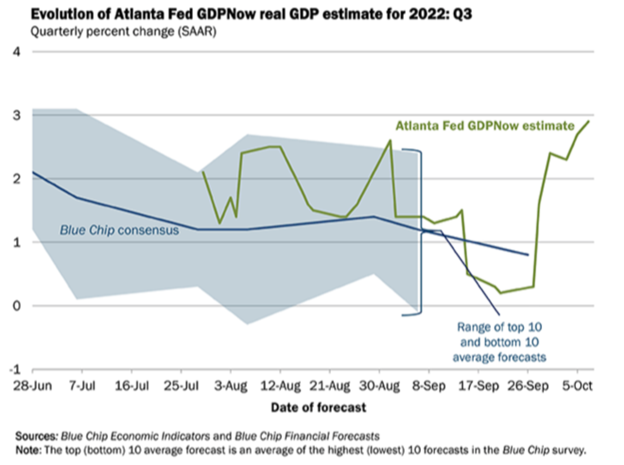 Obviously, inflation remains stubbornly high – September’s consumer price index (CPI) reading was up 8.2% from a year earlier, while so-called core CPI prices (i.e., no food and gas included) rose to 6.6% annually, a new 40-year high. That is a key datapoint for the Fed, but so are the ones we mentioned above that show we’re not currently in an actual recession.

At the risk of being repetitive, in our opinion the key going forward is the Fed’s ability to keep the M2 measure of money supply growing at the 1.5% annual rate it’s been able to maintain so far this year. Should that continue, it will allow inflation to eventually slow down. We believe controlling the money supply is most critical to controlling inflation. 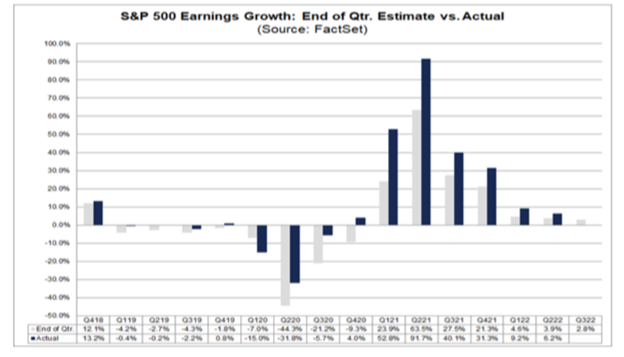 Given that most S&P 500 companies report actual earnings above estimates, we wanted to layout the likelihood of actual growth greater than the 2.8% consensus. Based on average improvement in the past few earnings seasons, our expectation is that the S&P 500 index will report actual earnings growth somewhere between 6.8%-8.3%.

Here’s how we calculated that range.

When companies in the S&P 500 report actual earnings above estimates, the overall earnings growth rate for the index increases. That’s because the actual earnings per share (EPS) numbers replace the lower analyst-estimated EPS numbers. This goes to valuation.

For the low-end reasonable expectation, we take a more pessimistic view and use the most recent history of the last two quarters, where actual earnings reported by S&P 500 companies only exceeded estimates by 4.0%. Adding that average earnings growth rate to the 2.8% consensus estimate gives us the low-end of 6.8%.

The question then becomes, will actual earnings relative to estimates trend closer to the last couple quarters or to the 10-year average?

As of this writing, 20 companies in the S&P 500 reported third quarter earnings. They have come in at an average growth rate of 6.9%.  That’s at the lower end of our range, but those are just the first of many reports.

One positive sign was PepsiCo, Inc. (PEP), which we own in our client dividend growth based portfolio model. It’s a good company with a strong balance sheet and cash flow. It achieved its best performance in nearly three years, reporting EPS of $1.95, up from $1.60 a year ago. It also raised its outlook for the future, which always helps. This is just one example of what we're hoping to see from solid companies.

To recap, we’re anticipating a third quarter earnings growth rate for the S&P 500 from 6.8% to 8.3%. So far actual earnings growth is 6.9%, which is the lower end of our range, but much greater than the consensus of 2.8%.

Inflation continues to run hot and seems to be quite persistent. However, we are starting to see some signs of welcome cooling that aren’t yet in the CPI report. We think it’s part of an overall normalization from COVID-19 weirdness. Here’s why.

Starting with housing, home prices rose greatly when mortgage rates were abnormally low. The average mortgage rate has more than doubled in the past year, and now home prices are beginning to fall. But that doesn’t mean they’re more affordable – remember, homeowners buy based on monthly payments, not the house value: 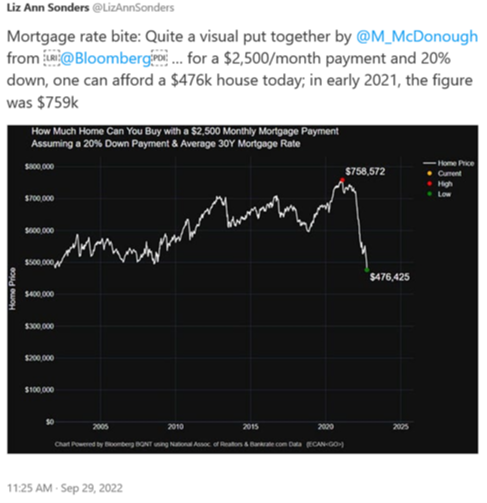 Odd as it seems, this normalization will have a positive effect on inflation data going forward. But it will take a few months for the data to show up in CPI reports.

Next is shipping. Costs skyrocketed over the past couple years and were passed on to consumers, making inflation jump. We're now seeing shipping container costs fall off a cliff significantly (below). Those decreases should also be passed through to consumers eventually. 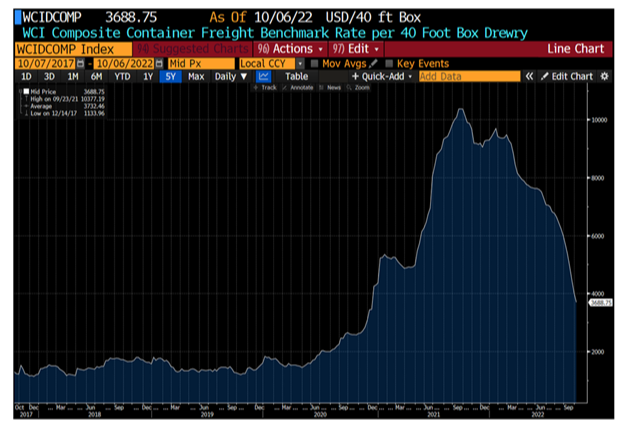 Normalization is slowly beginning to hit vehicles too. The pandemic increased prices of used vehicles due to a confluence of factors (e.g., cheap financing, low inventory, etc.). But as this chart shows, there’s been a market downturn recently: 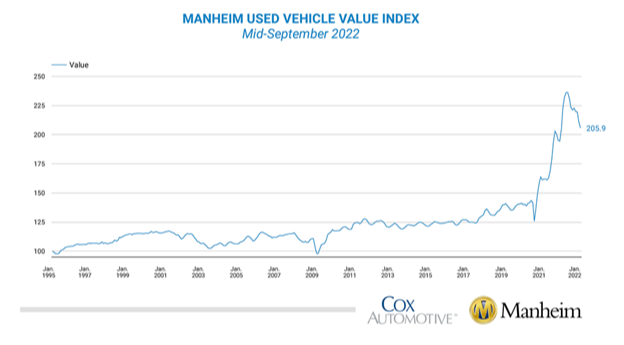 Moving our attention to the equities markets, we’ve seen multiple compression destroy stock prices. Growth stocks, like technology companies, have been especially battered. One of the best charts we’ve seen recently (below) segmented high-growth software firms based on revenue numbers (growth stocks are valued on revenue rather than earnings). It reflected an absolute valuation collapse in the sector: 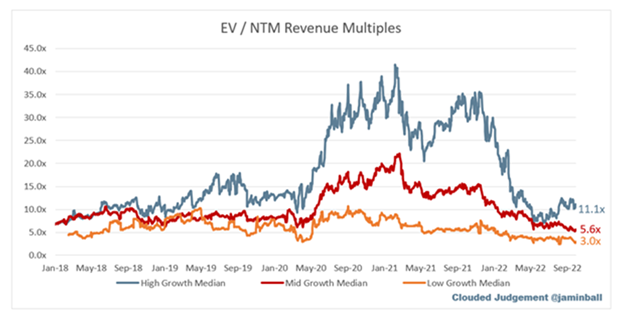 Consider how software companies are essential now and not nearly as speculative as in the past. Given that, there doesn’t seem to be much more room to fall – enough is enough at some point. 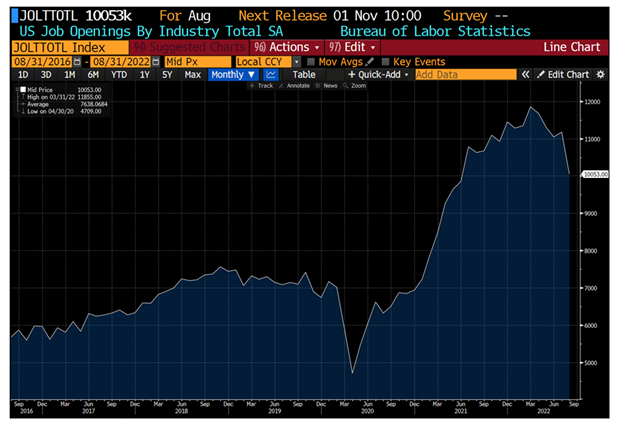 This is a sharp decrease from the FactSet expectation of 11.1 million and the biggest one-month decline since April 2020. Chairman Powell will probably be happy as this is a good leading indicator for achieving his “labor softening” objective. This too is normalization from an abnormally high amount of job openings (not many people being laid off).

While it's impossible to perfectly predict “the bottom” at any time, we are finally starting to see indications that a “normal” is arriving. And it’s not a new normal. It’s more like the old normal. When exactly will this happen? Well, we don't have a crystal ball, so we’re being purposely vague. But are we getting closer? Reading the tea leaves, we would say absolutely.