Policy, Relief Rallies Cause Anxiety, But There is Hope

Readers know that last week we put a microscope on the importance of the 10-year Treasury note when it comes to markets. We then saw that concept in action basically right after that blog post published.

Seeing this rate-rise frenzy is making many analysts wonder if the Federal Reserve is erring again. One of our favorite analysts (and one of the industry’s most respected commentators), Ed Yardeni of Yardeni Research, even wrote a special report titled, “Oh No: The Fed is Making Another Big Mistake!” In this case, the mistake is by the Fed reducing its balance sheet by $95 billion per month it’s forcing the 10-year rate substantially higher: 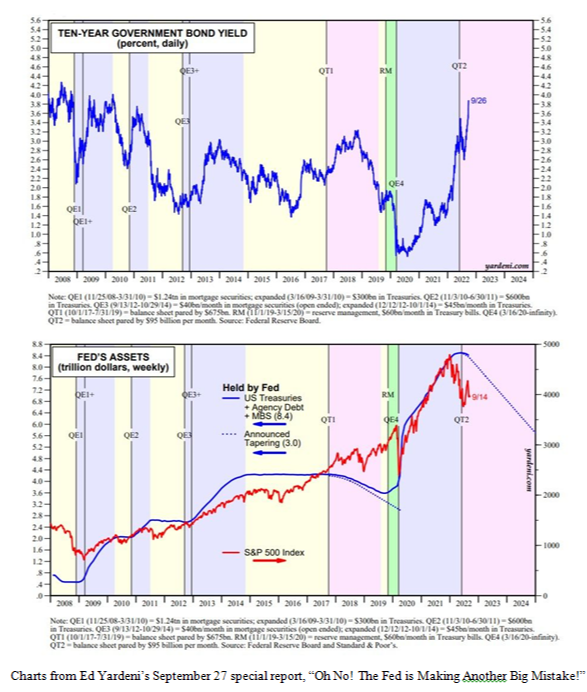 That caused turmoil in equity markets on Sept. 29-30. Then, oddly enough, the Bank of England saved the day. It implemented emergency actions due to a material risk to the U.K.’s financial system, saying it would buy $69 billion in long-term government bonds (or gilts) to avoid instability.

After the Bank of England announcement, 30-year bonds in the U.S. fell by a full 1.0% (from 5.0% to 4.0%). Furthermore, bond yields around the world fell on the perception that other central banks would soon follow the Bank of England’s lead. For instance, the 10-year Treasury retreated to around 3.6%, helping to spur the short two-day market rally on Monday and Tuesday of last week. 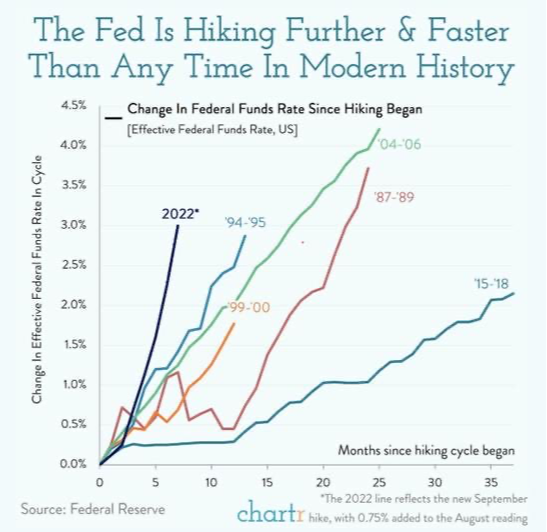 Perhaps worse, there is no historical context for this strategy. That’s troubling when you consider how the Fed’s job is supposed to be a steady hand, leaning against extremes to smooth out the market and economic outcomes.

Generally, central banks play a countercyclical role. But this Fed is doing exactly the opposite, causing extremes on both sides of the market cycles. It shows in this chart comparing the Fed’s balance sheet and the federal funds rate (the rate commercial banks use to borrow and lend excess reserves, also a benchmark for many other savings and loan rates). Look at how the past two years have produced an extreme divergence:

Is this another mistake? Time will tell, but it might be. 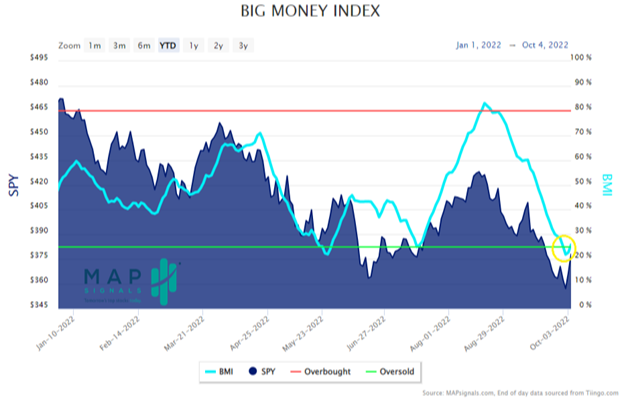 Then, just like in July, there was an almost immediate reversal in the market last Monday and Tuesday after the BMI went oversold and the 10-year Treasury got some relief. We may be experiencing the same short-term quick relief as the two other prior oversold instances this year: 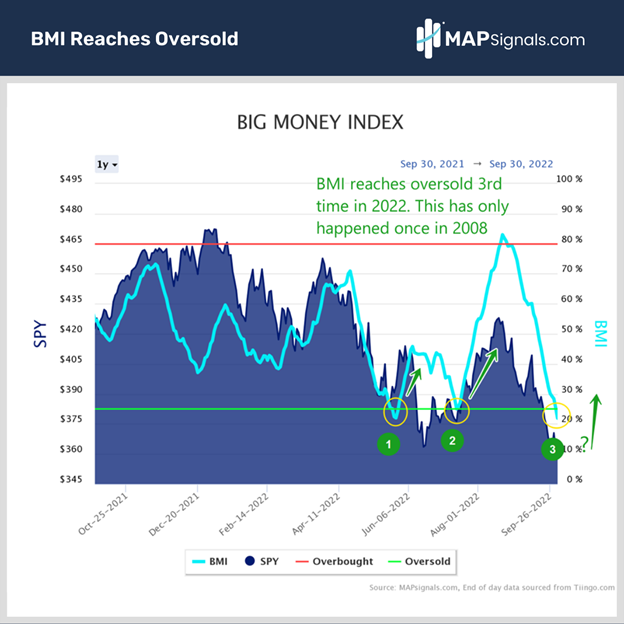 It's too early to tell if we'll get the same range-bound bounce as we did in scenarios one and two above, but history is on our side in the short term. Beyond that, we know the macro landscape needs to improve for a true bull market to occur. But as we’ve said before, that’s not looking likely until the middle of next year.

This level of an oversold market with the 10-year Treasury reversing is a perfect example of what we talked about last week (the timing was pure luck). For instance, as of the beginning of last week, more than 80% of the stocks we look at were considered oversold. And Bespoke Investment Group recently indicated every index it monitors is considered oversold right now. Essentially, this means these assets are well below their 50-day moving averages.

That points to unsustainable selling, which when combined with the relief in the 10-year Treasury, leads to these short-term relief rallies. Our friends at MAPsignals did great work in the following two charts, highlighting other instances over the past year where these extreme levels of both stock and exchange-traded fund (ETF) selling signaled near-term market lows:

We’ve mentioned before how there’s no context for a lot of what’s happened in the recent past. Well, now some of that history is starting to build up and patterns are emerging, so we can glance to the past to gain insight for the future. Right now, looking back at data adds credence to our near-term range-bound trading thesis.

So, analysts are pessimistic while the companies they cover are optimistic. Perhaps this is a new trend? Regardless, hopefully it’s happening because the companies know they’re seeing the fruits of their labor to control expenses, and earnings reports will reflect the progress, even if the economy is slowing. 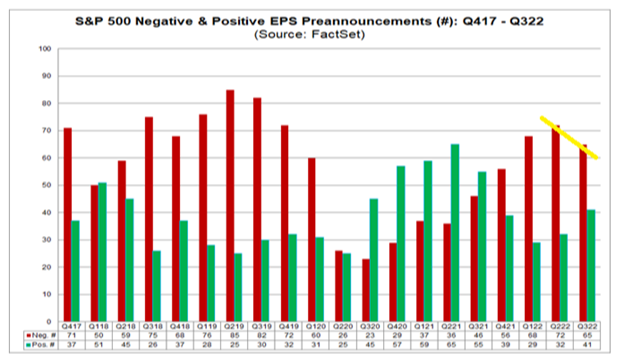 A big reason earnings are important for us is because they’re discounted by the Treasury yield in our capitalized profits model of fair market valuation. So, if we get some stabilization in the 10-year Treasury yield around like 3.6% or something similar combined with solid, positive earnings guidance going forward, it will create an undervalued market.

And this is the light at the end of the tunnel. There is hope!

In our opinion, given the concerns about a declining economy and rising interest rates, the market is likely to be even more focused than normal on earnings guidance this year and next. As we're collecting this earnings guidance, an important impact is how it affects the forward 12-month price-to-earnings (P/E) ratio for the S&P 500, which is now at 15.4. Comparatively, this reading is below the five-year average of 18.6 and below the 10-year average of 17.1: 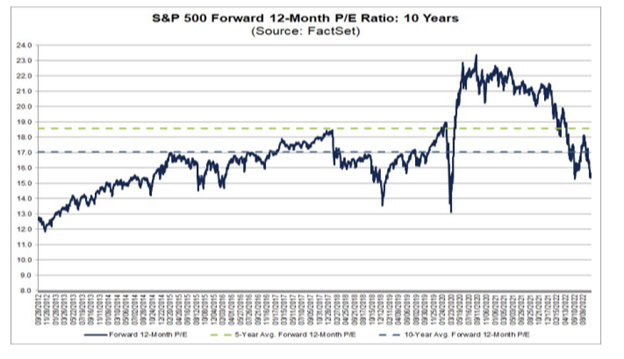 So, the positivity of this earnings expectation is that, with a lower forward P/E ratio, potentially some earnings guidance surprises to the upside, and a stabilized 10-year Treasury discount rate well below 4.0%, there’s an opportunity for the market to move up because it’s become undervalued. In other words, there may be room to run.