We had a different topic ready to go for this post, but last Tuesday’s Consumer Price Index (CPI) report forced us to change course quickly. The common inflation measure dropped less than expected, indicating more will need to be done by the Federal Reserve to bring prices down.

In July, the CPI stood at 8.5%, remaining unchanged from June. In August, the CPI rose 0.1% above the consensus expectation of -0.1%, finishing at 8.3% and producing a 0.2% spread between expected and actual readings: 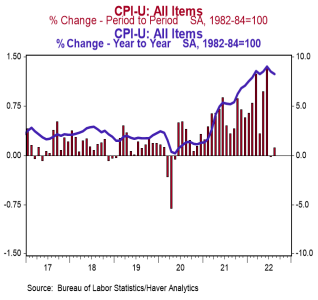 That 0.2% difference doesn’t seem like much. But as we all know, the stubbornly high CPI numbers, along with a Fed “strongly committed” to fighting inflation, scared investors (and their algorithms) into selling massively. Last Tuesday was the worst day for stocks since June 2020, the S&P 500 fell 4.3% and the Nasdaq composite index dropped 5.2%.

What’s most concerning for markets is this all occurred even as energy prices dropped 5.0% month-over-month. That means the “core” CPI, which excludes food and energy, rose 0.6% in August, well above the consensus expectation of 0.3%:

The elevated CPI number, combined with the fact that real average weekly earnings are down 3.4% in the past year even though they increased 0.2% in August, agitated Wall Street. But it enraged the algorithms even more.

Unfortunately, any ideas that inflation is dying were greatly exaggerated. While we're down from the peak of 9.1% back in June, we’re well above the Fed’s 2.0% target.

Let’s again focus on what seems to be the biggest issue – “core” prices being up 6.3% year-over-year. A big concern is that’s a larger increase than the 5.9% jump we saw in July.

To determine how this happened, we dove deeper into the CPI report. It’s apparent housing rents are a big contributor to the August increases, as they rose 0.7% alone and have been a key driver of 2022’s inflation. Unfortunately, we don’t see an end to this trend until probably 2024 because rents comprise more than 30% of the overall CPI and still have a long way to go before catching up to home prices.

So, how high has rent inflation soared and how important is that? Well, if rents increased at the August rate for an entire year, they would add 2.7% to overall inflation alone. In other words, we need significant deflation in multiple other areas just to offset what’s happening with rents.

We’ve said time and again how inflation has been and always will be a monetary phenomenon. The problem is that the Fed thinks it can manage inflation just by targeting short-term rates. But we think the Fed would serve us all better by getting the growth in the money supply under consistent control.

This concern over continuing inflation is apparent in the “bullish versus bearish” sentiment indicators. As we can see in the chart below, the latest American Association of Individual Investors (AAII) poll has become increasingly bearish since the market rally topped out around Aug. 17: 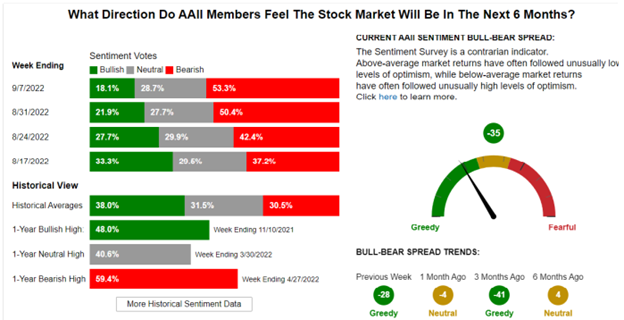 The silver lining is the AAII poll has been an accurate contrarian indicator historically.

So why was there such a massive negative reaction in the equity markets to the inflation news?

Even though we’ve indicated our opinion on short-term rate hikes not being the overall fix, the market knows that this inflation data means the Fed will continue being extremely hawkish, increasingly raising rates to tamper down inflation.

Our readers know we had been anticipating that the upcoming September rate hike of 75 basis points would be the last of the year, as typically the Fed prefers to not to raise interest rates during elections (and there’s one coming up). But last week’s inflation reading is giving us and the market pause. So, we now wouldn’t be surprised if there are another couple rate increases in November and December that the market had not priced in yet.

Why do short-term interest rate increases matter to the market?

They make less-risky assets, like Treasury notes, more attractive to investors due to the availability of safer returns. Much of our argument for a strong fourth quarter relied on the Fed not raising rates during an election. But with that seemingly out the window, the two-year Treasury market is pricing in spikes in September, November, and December, whereas before it was just September.

The reason this matters for stocks, especially growth stocks, is that they’re unlikely to truly bottom out until yields reverse. More specifically, falling two-year Treasury yields will signal that the bulls are back in charge.

The current bull case hinges on an economic soft landing (i.e., a growth slowdown without a recession). However, history shows they’re tough to accomplish. Since 1950, we've seen 13 Fed tightening cycles and all but three ended in recessions.

Up until last week, there was growing optimism that a soft landing would be possible because the Treasury yields were backing that up. But last week’s CPI reading introduced less likelihood the Fed can produce a soft landing. It will need to keep fighting inflation, which may inevitably trigger a recession. This goes to prove that the real recession risk has always been the second half of 2023.

Looking back at the best real-time market proxy for where the federal funds rate is heading – the two-year Treasury yield – we don’t need to go much before mid-June to see the pullback. Investors anticipated less tightening at that point and stocks ripped higher. But markets have discounted more aggressive Fed tightening since the Jackson Hole meeting and the CPI report, causing two-year yields to surge back up to new highs.

Thus, the late-summer rebound is done.

What can reignite a bull run is decreasing bond yields. Falling two-year bond yields are bullish because they signal peak Fed hawkishness is behind us, which lowers recession risk. In the chart below, you'll notice the inverse relationship between two-year yields and growth stocks. As yields climb, stocks fall, and vice versa.

In short, everything we've said to this point is encapsulated in this one chart: 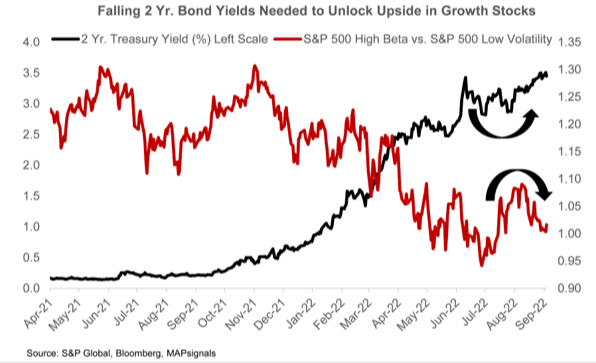 The crux of this whole thing is that last Tuesday’s CPI was bad, which caused the two-year Treasury rate to increase because of an expectation of more interest rate increases this year than what was expected the day prior. Therefore, we saw a selloff.

So, how do we need to play this? We'll list it out so you can follow along at home (spoiler alert: it’s basically a continuation of what we’ve been doing since the middle of last year): 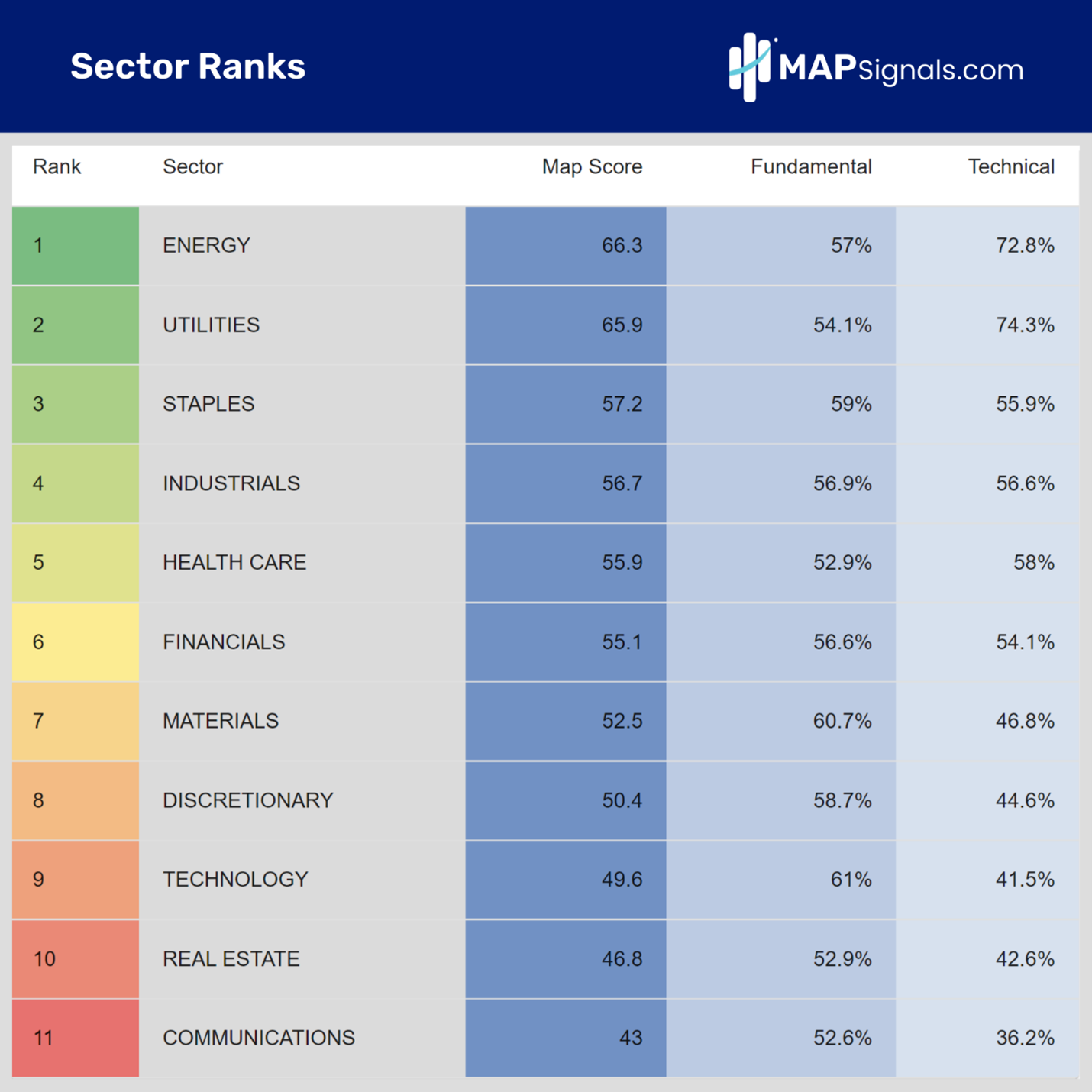 Once we see a persistent downward trend in two-year Treasury yields, it will signal that peak Fed hawkishness is behind us. That will ease recession fears and should send stocks upward. Until then, we’ll continue to stay nimble and execute the above playbook, which has worked out so far this year.