Housing is the Next Inflated Bubble to Burst

Markets have continued to consolidate in September, as we suspected they would, which has created significant volatility. The theme of red prevailing in markets is holding true at the moment (albeit there was a nice reprieve late last week) and it could last for a bit more before we see any late-year lifts, as has been the case historically.

With that in mind, today we want to examine some different parts of the financial universe that affect pretty much everyone – housing and inflation. Oddly enough, we’re starting to see some news outlets bring up housing prices, rents, and inflation, so we thought a macro-level examination was in order.

It’s clear the housing sector surged during COVID-19 due in large part to easy money policies and became a significant part of the inflation story. Now with rising short-term rates and slower growth in the M2 money supply, which sent mortgage rates higher (along with many other things), the housing sector now has a bad case of indigestion.

This probably sounds familiar because it's similar to what happened to real, inflation-adjusted retail sales. Back in 2021, sales soared. But they’ve since plateaued as consumer spending has migrated to services from goods.

We expect a similar shakeup to continue in the next few years with housing. The national average of home prices is roughly unchanged, while rents continue to catch up.

We say “continue” because we’re starting to see dramatic change on home prices. For example, the Case-Shiller Index, which tracks the changes in value of single-family U.S. homes, rose by more than 1% every month from August 2020-May 2022. In just the first five months of 2022, home prices rose a total of 8.9%.

But then came June, which is when prices rose just 0.3%.

Bad memories from the late 2000s housing bust may have people thinking we’re in for a downfall. But back then, big structural flaws gave way. IN NO WAY IS THAT THE CASE NOW. In fact, we think it’s highly unlikely there will be a collapse for three key reasons.

Next, although home prices have risen substantially since 2020, they are up only about 2% relative to replacement costs in that time (and about 4% more than the median in the past 40 years). The reason that matters is the more it costs to replace your home, the more your current home is worth.  Factoring that in, these price rises are really no big deal – they’re de minimis in nature.

Lastly, rents should continue to rise at a rapid pace. That should install a sturdier floor under home values.

So, at the end of the day we're seeing the housing market suffer from higher interest rates. This is not a fundamental financial crisis, it’s supply-and-demand economics.

Why is that important for inflation? Well, housing represents about a third of the value of the market basket of goods and services used by the Bureau of Labor Statistics (BLS) to track inflation in the Consumer Price Index (CPI).

Furthermore, when it comes to tenant rent, the BLS counts cash rent paid to the landlord for shelter and any utilities included in the lease. Conversely, if the housing unit is occupied by the owners, the BLS computes what it would cost the owner to rent a similar place. This datapoint is known as the owner’s equivalent rent (OER).

To be clear though, what isn’t included in the CPI directly is the change in value of the house, as that is done somewhat via proxy using OER. The problem is that finding rental housing comparable to an owner-occupied unit can be extremely difficult. This is especially true as more homeowners stay put, resulting in very little rental inventory available. Another difficulty is that rents change when leases expire, which typically happens annually. That means there’s a lag between many housing indexes and those in the BLS measurements.

Now that we understand the role of housing on the CPI, let's look at some real-time indicators to get a grasp on the state of the market.

If you were to point to one thing affecting residential real estate right now, it is interest rates hikes. These increases are having a huge impact on both renting and buying right now.

That’s because when a mortgage lender decides to lend money for a home purchase, it considers what’s called the debt service coverage ratio (DSCR). Essentially, this is how much money you're bringing to the transaction divided by how much you need to pay out to repay the debt.

Let’s take a look at a hypothetical example of a $500,000 mortgage amortizing over 25 years with different interest rates. During the period of loose money, some people were able to get rates as low as 1.45% or thereabouts, making the monthly payment $1,987.

Now, say your income is roughly $5,000 per month after taxes. The DSCR on just this piece of debt alone went from 2.5 to 1.7. If you're a mortgage lender, you will reject far more loan applications based on this analysis than in periods of loose money.

This reality pushes many more shelter seekers to the rental market, resulting in higher demand for rental units, and thus higher rents. The scenario just described is what’s driving the current escalation in rental rates. 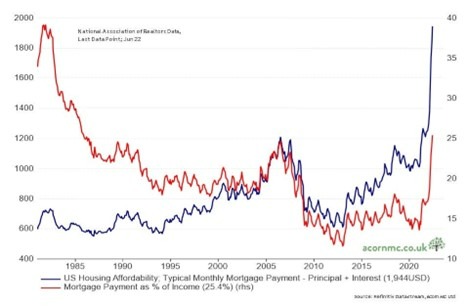 We're also seeing a massive drop off in listings, which is lessening the infamous bidding wars we’ve all heard about over the past few years: 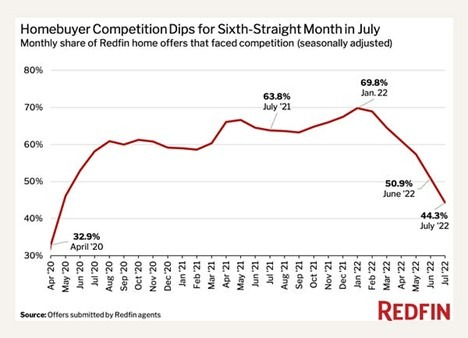 Another trend picking up is many home sellers needing to drop prices in order to close the sale: 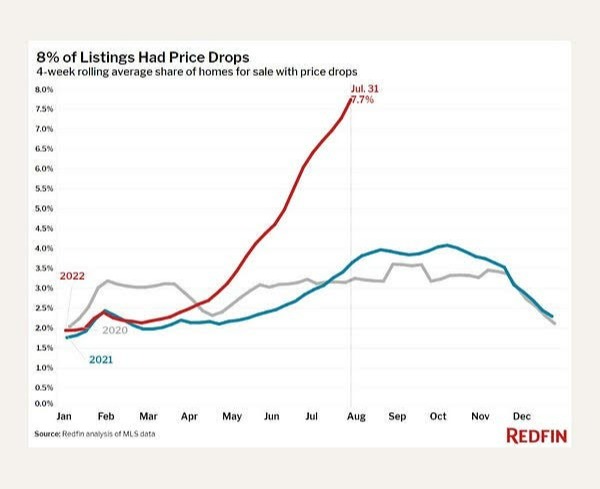 Extending our view, we can see there have been more price drops this summer than at any time since 2015: 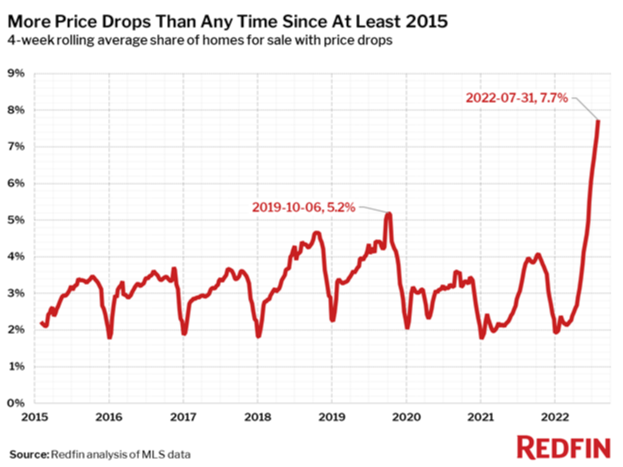 The last piece of real-time data is existing home sales, which have dropped off a cliff:

Taking all four charts together, we can see how real-time data makes a difference. The reflection is one of less inventory, decreasing prices, and increasing costs. It seems clear that the residential real estate asset bubble was popped earlier this year around May.

Given what’s happening – interest rates are rising to cool inflation – it seems pretty obvious that interest rate hikes are lowering housing demand and affordability. The evidence is clear – volumes of home sales and home values are both dropping. This is a textbook example of supply-and-demand economics.

To be clear, please don’t think this is the 2008 housing crisis all over again. Back then we experienced a systemic failure and complete loss of confidence in the lending environment. That’s not the case this time around.

The way we see it, this is another asset bubble being pricked. It’s a correction from an irrational base, just like we saw with certain “moon-bound” technology stocks, cryptocurrencies, margin debt, and so on.

Cheap debt combined with relatively stable wage growth increased buying power for nearly every consumer. Plus, foreign buyers flooded major city centers. With those two catalysts going away, housing demand is eroding so much that many people aren't even listing their homes for sale as it doesn't make financial sense to them currently.

What does this mean for inflation going forward? Well, with asset prices declining, governmental inflation measures will eventually decrease too. But we believe it will be a long, slow burn to unwind this “asset bubble.”

While some lament “dismal” housing prices on a year-to-date basis, let’s introduce some perspective. When zooming out to timeframes of five or more years, housing prices are still extremely strong. We don’t see structural failure, but rather demand and supply naturally adjusting to a higher interest rate environment, which is the intention of the Federal Reserve.

You may have heard the phrase, “High prices are the cure for high prices.” Well, that’s what we’re seeing now – manufactured demand destruction. This will continue until prices come back down to the point where affordability gets back to realistic levels in conjunction with interest rates. When it happens, it will be a positive catalyst to a decreasing CPI over time.