The market gyrations continue. One day growth stocks are bought, and value stocks sold. The next day, it’s the opposite. Today we want to address what’s taking place under the surface of big market index activity and what it means going forward.

A good example is our last full week of data from the MAPsignals Big Money Index (BMI), which tracks institutional investor activity. We saw 343 buys and 425 sells (above chart). It’s generally an even balance of buying and selling. This is representative of the day-to-day volatility because of the buying the buying and the selling creating a sort of equilibrium.

You could also see this in the chart below showing “big money” stocks and buys, which we zoomed into the most recent three months. During this time frame there's been a fairly equal rotation between buying and selling. 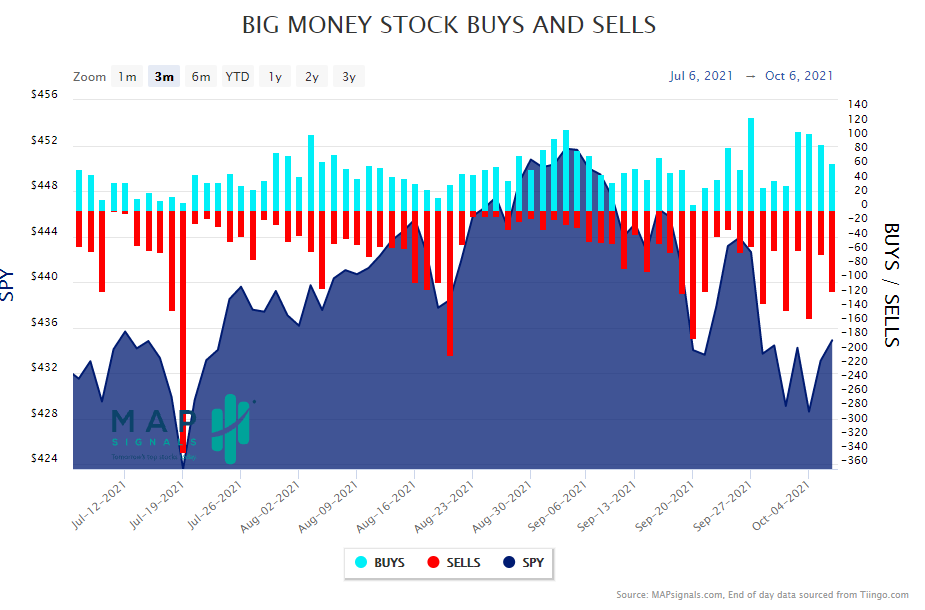 And then last week, as you can see in the chart below, there were an extraordinary 722 trips in the BMI, indicating outsized trading activity on Wednesday, Oct. 7. It’s almost as if “big money” is buying off the algorithmic traders because these are aggressive, bullish moves. 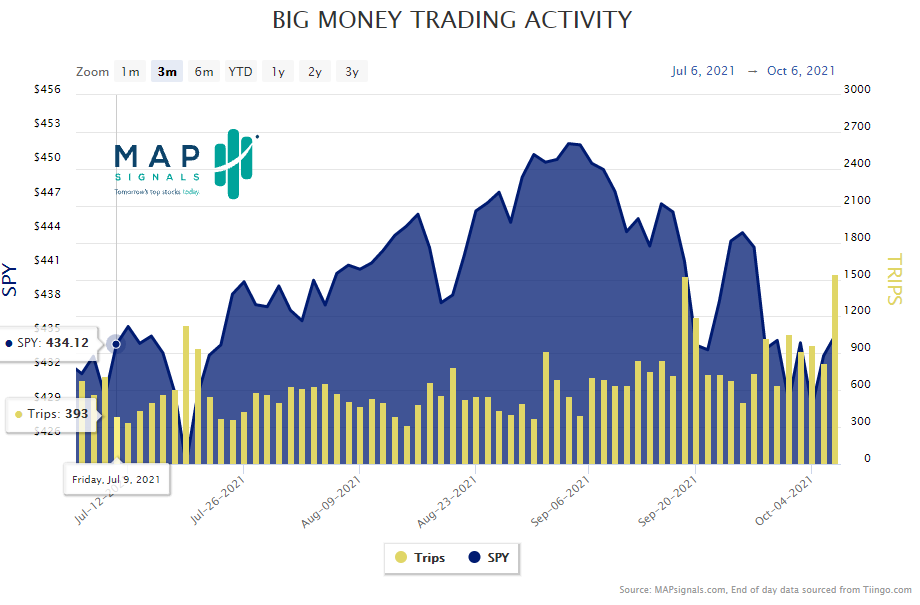 So, “big money” is starting to move rapidly and in force. But where? There is major activity and it’s important to understand where the funds are flowing as we go forward.

As we look under the surface, most of what we’re seeing is leading us to believe that there's more rotation happening into value from growth. That’s because there's increasing comfort in the stability of our full economic reopening.

It’s also reflected in the sector rankings chart below. The buying in energy and financials is incredible, especially energy. Those are value reopening trades. And look at the bottom three – materials, staples, and utilities. These are typically more conservative, “risk off” sectors.

We understand this can seem frustrating, especially when it’s a repeated theme. We pointed out over the past couple months the various layers of conflict. Still, big indexes have risen all year, giving the appearance of a strong, healthy market:

But remember these are cap-weighted indexes. They’ve been significantly affected by the huge FAANG stocks (Facebook, Amazon, Apple, Netflix, and Google) as well as Microsoft.

But looking at the Russell 2000, we can see a clear picture of the market’s cyclical gyrations: 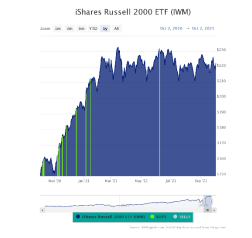 This again indicates that growth would be up one week only to be sold in favor of value the next. Tech up, energy down. Reopen stocks bought, then sold soon thereafter.

This would leave at least some investors to think the only thing they can expect is the unexpected. There are a handful of good examples over the last few weeks of unexpected events causing one-day hiccups in the market, which have made it difficult to string together days of “big money” buying and gains.

For instance, we saw the Evergrande situation and the market issues that caused. Next, the Federal Reserve “changed its mind” in pulling forward both its bond tapering program and the pace of planned interest rate hikes.

More recently, the debt ceiling battle in Congress caused both ups and downs in the market. Uncertainty with federal spending sent markets down. But news of an agreement, even if only temporary, pleased investors.

And lastly, the Facebook whistleblower hearing in the Senate caused the mega-cap led market pullback last Monday, Oct. 4. In an odd coincidence, Facebook also crashed for most of that day.

Despite these hiccups, good things occurred. The market seemed to be getting a much-needed jolt of buying pressure, especially in the middle of last week. That's a big indicator institutional money is buying weakness after a market tantrum because of the Facebook news on Monday. For us, this continues the trend that, while the market is trying to find its footing amid all these hiccups, a good base is setting up for a seasonally strong time here.

While some of these days seem like just another day of volatility, when we dig into what stocks are being bought, we can see a pattern emerging. This table captures in numbers the market ups and downs that have been prevalent for a long time:

In the above chart, what’s most interesting is the notable buying in discretionary, energy, and financial stocks, with selling in staples and healthcare. While this is a small sample size, it supports the story of a demand for quality reopening stocks and selling of defensive stocks. While we didn't have the data for all the last week at the time of this writing, we expect to see much of the same or similar data from a buying and selling standpoint.

Thus, the market is hoping for a fully functioning economy soon. But it's a little too early to tell if this has full legs. Still, the combination of a seasonally strong time year, hordes of cash on the sideline for both institutions and retail investors, and plenty of big buying at the beginning of the quarter sets the stage for seasonally strong growth going forward.

Growth of the Grid

We’ve discussed different investment theme ideas in the past, like 5G. Now we want to talk energy because we think energy in the U.S. could become a growth sector for investors.

An interesting quote attributed to Musk from the CodeCon conference is, “If we shift all transport to electric, then electricity demand approximately doubles...this is going to create a lot of challenges with the grid.”

To help put what Musk is saying in perspective, think about the fact that today there are about 276 million cars, trucks, buses, and motorcycles on U.S. roads alone. Only about 1% of them are all electric.

From an investment theme standpoint, most of the attention towards the green transportation evolution is paid towards companies manufacturing vehicles and battery manufacturers. But as of now, little attention is paid to how this will stress the existing electric grid.

With the expectation of about 50% of all new auto sales in U.S. being all electric by 2030, the number of all electric vehicles will be roughly about 15% of vehicles on the road in comparison with the current 1%. If we follow that glide path, realistically it will take the better part of a generation to convert most gas- and diesel-powered vehicles to electric power.

To put this into further perspective, currently the U.S. consumes roughly 19 million barrels of oil per day, or about 7 billion barrels per year. According to BP’s annual energy report, about 40-50% of those barrels are used to power cars. So, consider the massive changeover required in America's electric power grid infrastructure.

To us, this indicates the transition to electric renewables in an intelligent way is harder than is currently being discussed. Therefore, it creates a potentially profitable and interesting investment theme within electric utilities.

The International Energy Agency (IEA) reported in July that electricity demand is growing faster than renewables. The IEA’s Director of Energy Markets stated, “Renewable power is growing impressively in many parts of the world, but it still isn't where it needs to be to put us on a path to reach net zero emissions by mid-century.”

This statement supports the thesis that electrification of America by renewables is a generational task where the largest utility companies will continue to be the primary providers of power to homes and businesses. That could allow investment markets to warm up to the utility sector overall.

Quite simply, if Musk is right (and we think he is), the case for accelerating sales and earnings growth can be made for the often-boring utility sector. 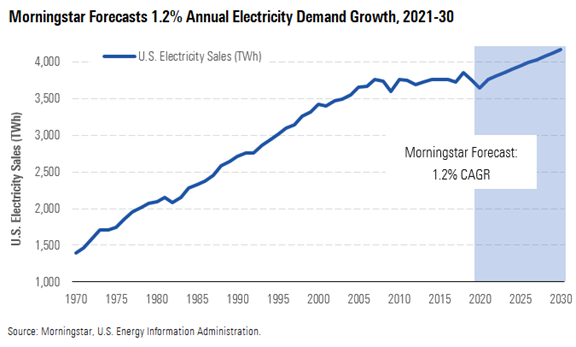 The nation’s utility sector needs a new growth phase for the EV changeover. So, an energy play might make investible sense for what would be robust future dividend growth as this gigantic transformation takes place via unseen CapEx investments and infrastructure upgrades.

Stay tuned on this one. It’s another transformational change that we’ll be keeping a close eye on as we seek additional thematic investment opportunities within our portfolios.