For those who don’t know, about a week and a half ago the Federal Reserve forecasted plenty of changes to the outlook for monetary policy in the next few years. If we’re being honest, the Fed finally boarded the train with everyone else.

While Fed Chairman Jerome Powell didn't explicitly direct short sellers towards the Treasury future markets, he did for the first time indicate that he wants the Fed to be out of the quantitative easing business by mid-year 2022. He also wants to start the tapering process in the fourth quarter of this year. 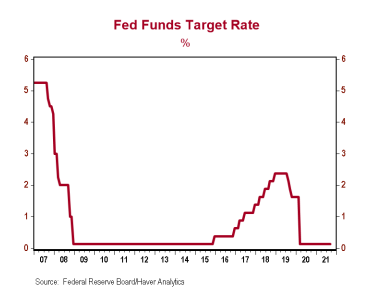 The only thing that would stop this strategy is for the economy to take a sudden, unexpected turn for the worse.  While that’s always possible, it’s not likely. Chairman Powell’s plan implies a rate of tapering (or reduction) of bond purchases by about $15-20 billion per month from the present rate of $120 billion per month.

This message helped the Treasury market clear the 1.38% resistance level on the 10-year yield and it’s continued to increase since then. More on that later.

Aggressive tapering will likely push Treasury yields to around 2% (or just above) by the end of 2021. More on that later too.

A key reversal from Chairman Powell can be found in a statement that he said in his press conference. He said the hurdle of “substantial further progress” toward the Fed’s goals before tapering begins has been “all but met.” For the record, he also didn’t use the word “transitory.”

Additionally, the Fed decided to join the rest of us when Chairman Powell said, “The causes of the recent rise of inflation may last longer than anticipated...while economic growth has continued to strengthen, it has been met with upward price pressures caused by supply chain bottlenecks and other factors.”

What other factors could he mean? How about anything we've talked about in this blog since about February.

This admission, while subtle, is what is forcing the Fed’s hand to taper (which should have been done six months ago). Thus, it raises the probability of rate hikes sooner than expected to tamp down over-hot inflation.

This can be seen in terms of rate hikes, where there were significant changes to the dot plots, which are policymakers’ projections for short-term interest rates. For the first time, the Fed is evenly split, with nine policymakers projecting rate hikes to begin in 2022.

That’s a huge reversal from the projection of rate hikes starting in 2023. Also, the dot plots became significantly more aggressive in 2023 and beyond.

What’s somewhat interesting is these more aggressive projections for the path of short-term rates were not accompanied by a more aggressive economic forecast. Actually, the Fed downgraded real GDP growth to 5.9% from the previous estimate of 7.0% (a few weeks ago we did too).

The Fed raised its inflation forecast for this year to 4.2% versus the prior estimate of 3.4%. These changes, along with the sudden need to start tapering and raising interest rates sooner, to us is an admission that the Fed’s forecast on inflation has been clearly too low for a long time. It would also help if the central bank began to normalize its past influence on the markets and interest rates going forward.

But let us be clear – none of this is bad news. We just believe the Fed is about six months too late to the party.

So, how does this affect the market?

First, we’ll likely see higher volatility. However, that doesn't mean the market will not continue an upward trend. Rather, it will just normalize. A good example of this what occurred last week on Tuesday, Sept. 27, when the market had a temper tantrum. Major indexes dropped more than 2% each as the 10-year Treasury yield reached 1.5%. A sell-off ensued, led by large cap growth stocks, which would be expected in the near term.

But looking farther out, do the data point to a bullish future? The short answer is yes.

Looking at MAPsignals’ trusty Big Money Index (BMI), you can see it was rising until a short dip as the result of Tuesday's temper tantrum: 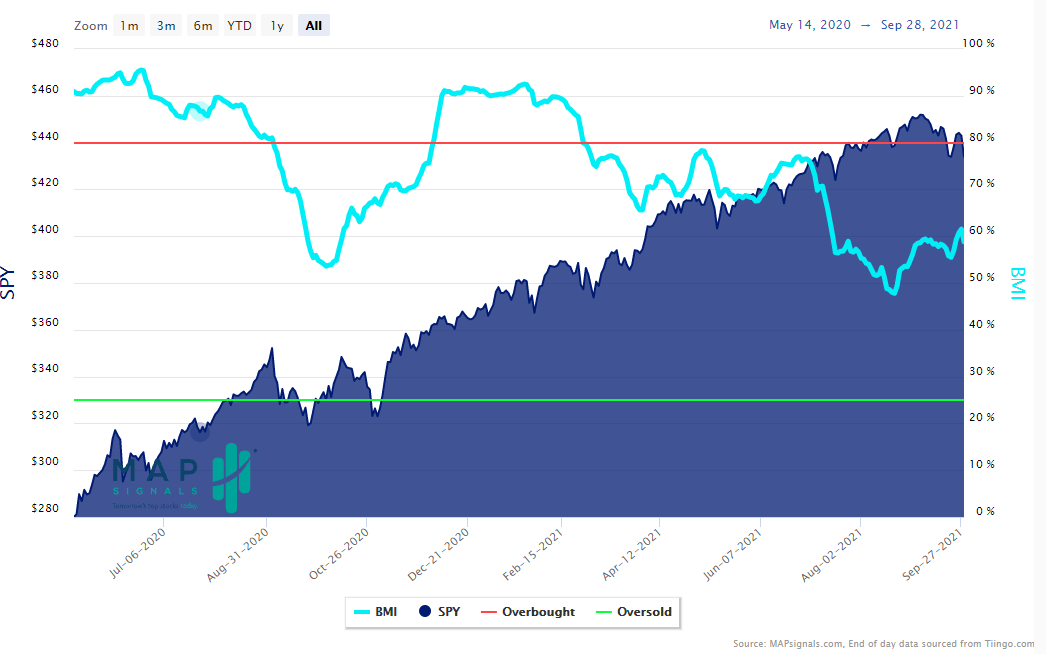 In the far right on the following two charts we see big flush outs of selling both stocks and exchange traded funds (ETFs): 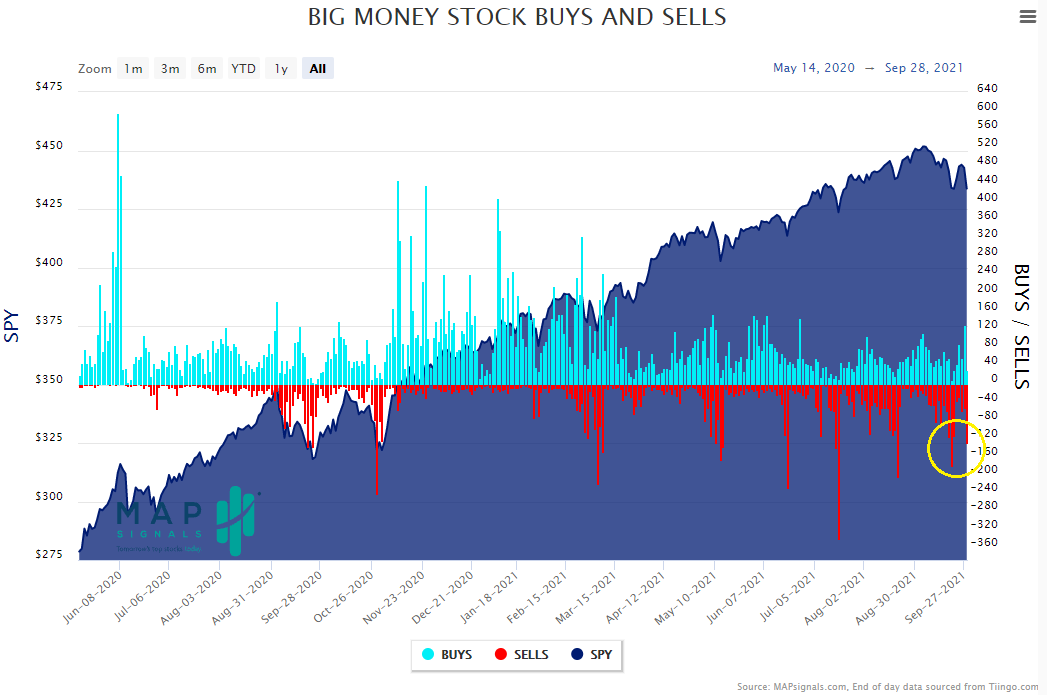 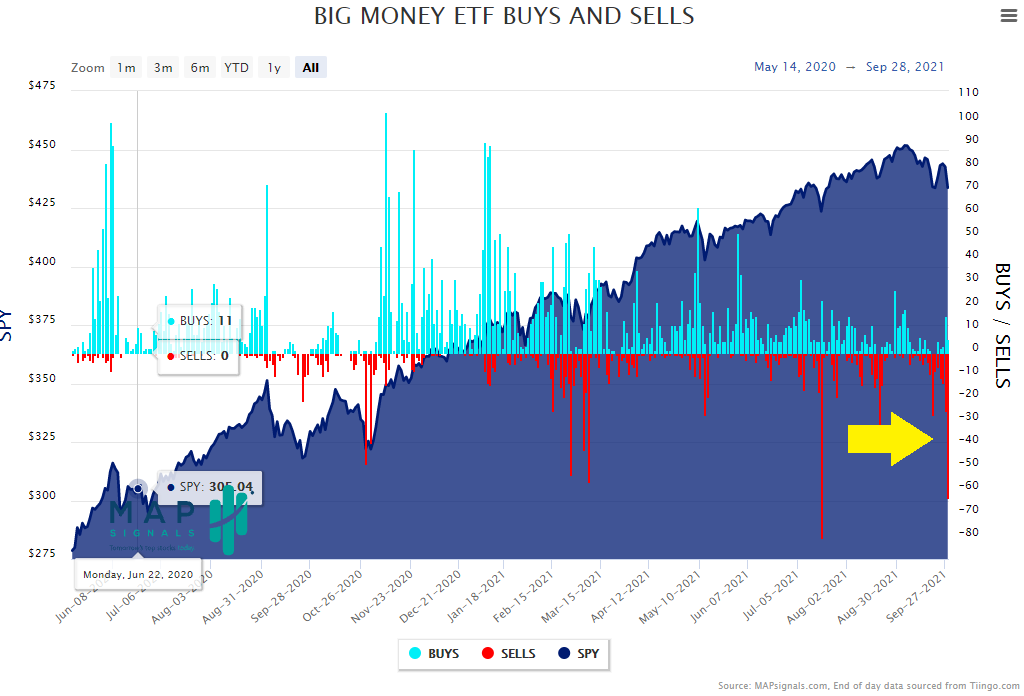 But we want to point out, especially in the ETF chart, that we think the selling was exacerbated due to end of quarter rebalancing and portfolio window dressing. While on the surface these big sell days may seem scary, they’re necessary to create a strong base going forward, if the underlying buys are quality growth stocks (and they are).

The reason we saw the NASDAQ and S&P 500 indexes take such big hits on Tuesday is that a lot of the damage was done in the large cap, overly weighted, bigger stocks. The selling means things are being spread out more. Evidence can be seen in the Russell 2000 Index, which is outperforming on up days and experiencing less volatility on down days, when compared to larger indexes.

Interestingly, we had one of the highest days of “big money” trading activity last week. There were 1,021 “big money” trips on Sept. 28, which is huge. But remember, not all trips are selling. Some are buying. 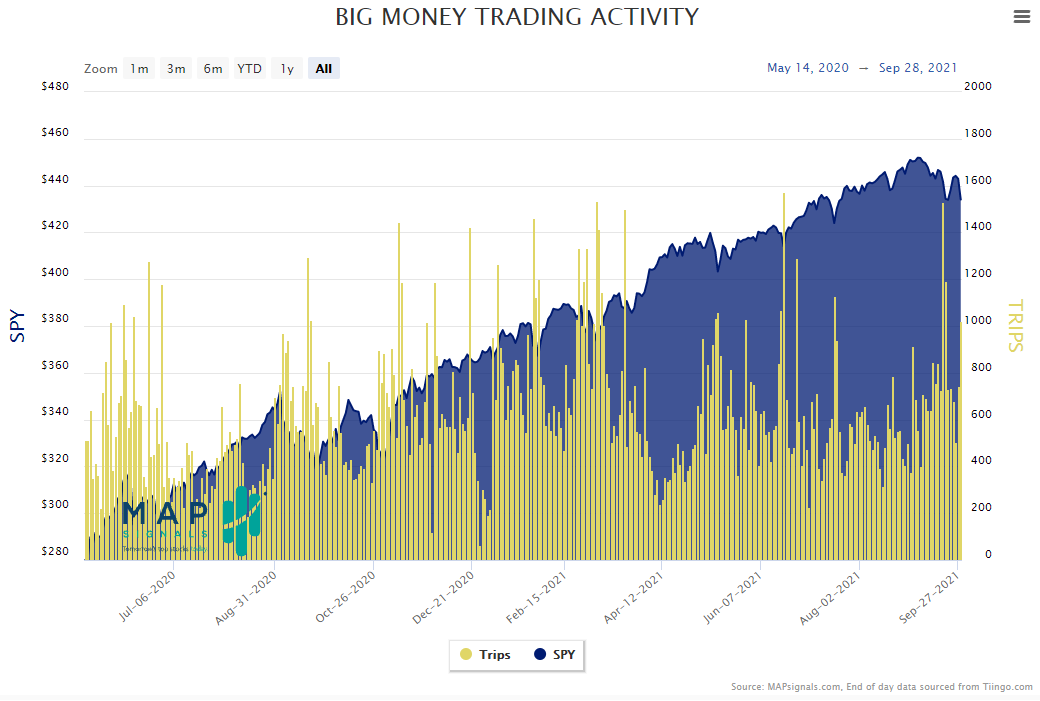 The stock and ETF dump last Tuesday was a direct result of interest rates quickly reaching that 1.5% level, triggering AI and algorithmic programs. But if you remember from July, using our capitalized profits model to determine a valuation of the S&P 500, even with a 2% yield on the 10-year Treasury, the S&P 500 still is undervalued, and that's without any revenue or profit growth.

From a market standpoint, what we saw last week was a quick reaction to interest rates creating volatility. The reaction is like the Evergrande situation from a few weeks ago. Per MAPsignals data, the Evergrande sell-off was limited to a single day:

While we don't have the data yet, we expect last Tuesday's selling will show the same type of concentration. These types of events seem huge when they happen. But it’s normal market behavior.

Again, things are spreading out. This is good for the remainder of the year from a market consolidation standpoint. More areas of strength mean markets won’t rely solely on those five or six large cap tech stocks.

To summarize, the Fed is catching up, recent selling is likely a one-off scenario, and there’s a significant movement for high quality growth stocks. All of this is bullish as we roll into a historically strong part of the year.

The Fed said it finally – inflation is real, not transitory, and it means rates need to rise. That puts more onus on investors’ returns to beat inflation. But two things give us comfort going forward from a market data standpoint and as an inflation hedge.

The first is dividend payouts. We are bullish on dividend growth stocks as the best hedge against inflation and rising interest rates. What we see below is how S&P 500 companies paid out $123.38 billion in cash dividends in the second quarter, which is just below the all-time high of $126.98 billion (Q1 2020, just before the pandemic). 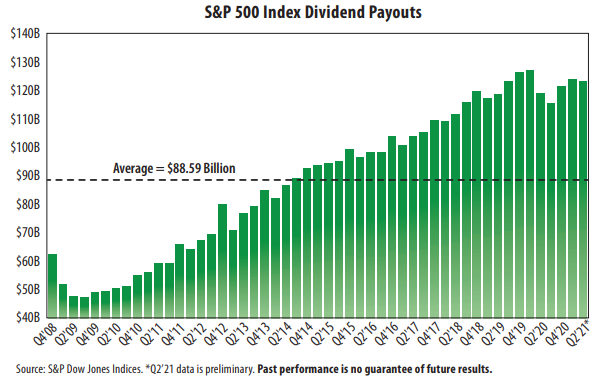 This shows a healthy, continued recovery in growth of dividend payments. According to Bloomberg, the S&P 500 Index dividend payments are expected to increase from $60.65 per share to $65.25 per share from this year to next. That's a 7.6% increase – much higher than inflation. If your dividends are growing at almost double the rate of inflation, that’s winning.

To put this in perspective, as of Sept. 27, 2021, the dividend yield for the S&P 500 stood at 1.33%. In 2018, it closed at 2.15%. That gap indicates there is significant room to grow dividends from a macro level to fight the inflationary bug we’re currently dealing with.

The second hedge is the consumer. In the chart below you can see a comparison of record-low consumer default rates overlaid with the S&P 500 Consumer Discretionary Index increasing: 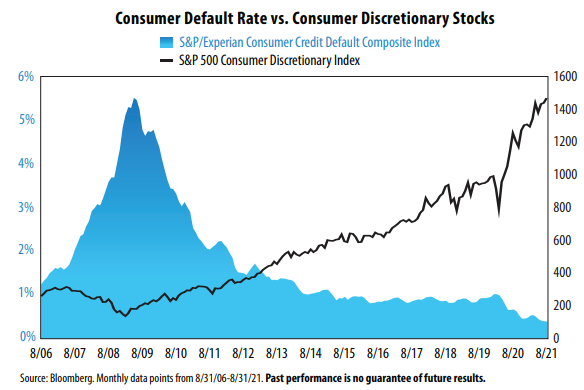 As readers of this blog know, consumer discretionary spending is the largest portion of U.S. gross domestic product. This historically low default rate is especially encouraging, considering the economic fallout from the pandemic. It all indicates the consumer will be able to continue to support the economic recovery, providing additional hedges against inflationary risk.