Prognosticating is never easy. Remember when we said making predictions for 2023 is extraordinarily difficult? We meant it.

Thankfully, there’s no harm in making predictions because they tend to have a positive selection bias – humans lean towards the ones that pan out. People have a funny way of forgetting the silly forecasts that don't come true. But we tend to remember the wins.

Even with that being the case, it is important for us to make predictions, even in the most difficult times, provided they’re based on data. That’s because data helps us make our best decisions and forward-looking plans.

We’re going to make an attempt to peer into 2023 a little bit further and predict what may take place. To effectively do this, though, we're going to need to look a little bit back in time. First, we'll examine the most recent past few weeks and a more macro view of the year as a whole. Using that as a backdrop, we’ll frame out expectations for 2023.

Looking back at last quarter, remember we said that October to December would be strong for the stock market compared to the rest of the year. Well, that came true, but not as expected.

October and November were extremely strong months. But December was disappointing, bucking the historical trend of the final month of the year being good for the S&P 500. Still, the fourth quarter represented a 7.8% rally for the S&P 500 overall, even with December being a non-factor. 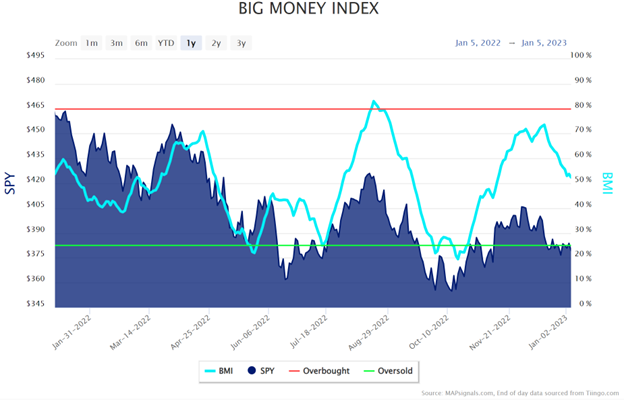 The BMI came within spitting distance of being overbought but stumbled to end 2022. Readers may think that’s due to big selling, which makes sense. But the BMI fell in December because buying slowed while volume dwindled to low levels.

In essence, buying evaporated. There hasn't been big selling dragging indexes down, only a lack of buying combined with nominal selling. It was enough to slow the BMI’s rise and reverse its trend.

How do we know this when looking at the data? In the two charts below, we can see the “big money” buying and selling of individual stocks and exchange-traded funds (ETFs). October and November were flush with buying, while selling wasn’t noticeable (and still isn’t). But the drop in buying is noticeable: 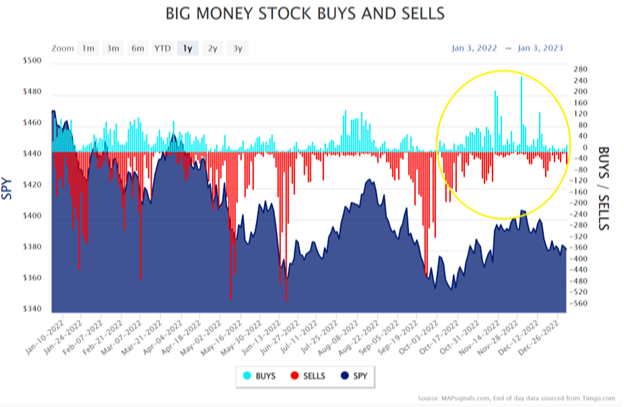 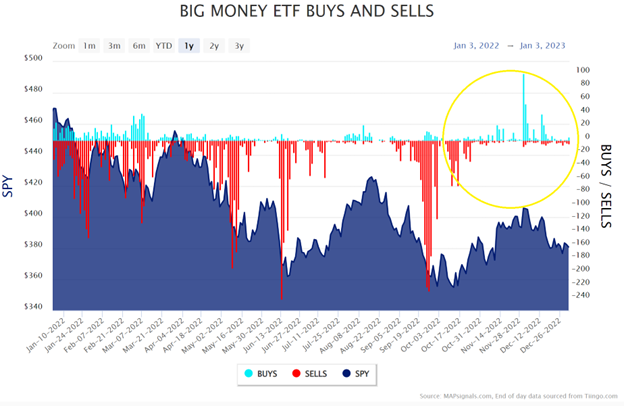 The following chart shows “big money” investor buy and sell signals by market capitalization for the last week of 2022. The signal count for the week is so low, it’s barely equivalent to the daily average normal volumes: 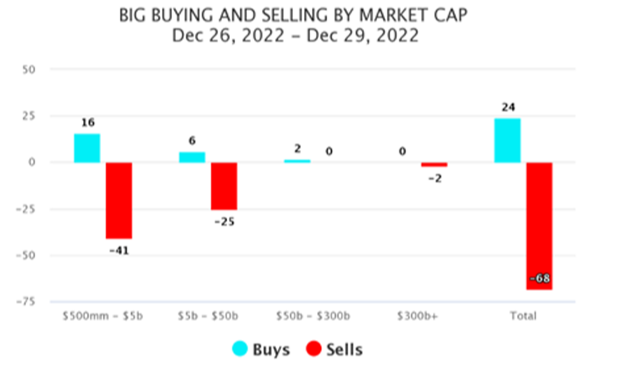 In other words, that one week was barely a normal day in terms of volume. Essentially that means December’s pullback was on low to meaningless volume. Since that is an outlier on the small side, we can’t confidently predict that this trend will continue in 2023.

Indexes Down, But Not All Sectors

Despite recession fears and doomsayers, inflation is moderating, and the Federal Reserve’s aggressive rate hikes will eventually end (hopefully soon). But remember, even in rough markets, there's always opportunity.

We saw this in 2022 when we look at sector strength (we were able to find success in energy, health care, and staples), and it’s likely to remain similar as 2023 begins: 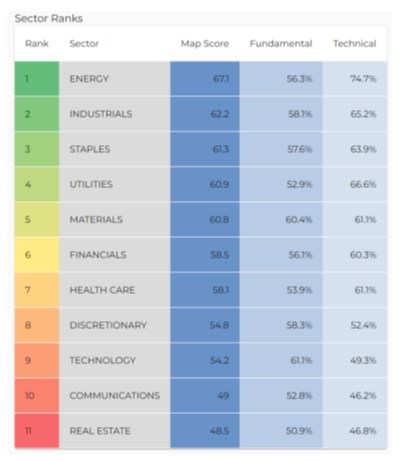 Looking back to “big money” investor buy and sell signals by market capitalization for all of 2022, something incredibly interesting appears. In a huge reversal from the past decade, “big money” buying was focused on small- and mid-cap stocks while mega-cap stocks (i.e., huge tech firms) saw little action, most of which was selling: 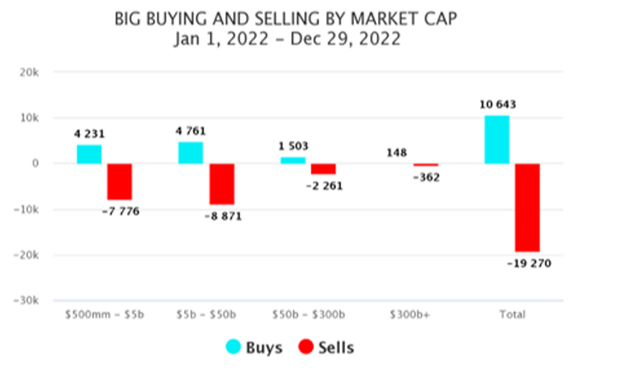 We’ve mentioned before how tech last year was under pressure (especially big tech companies) because passive index investors were forced to sell large tech firms to track their indexes. As energy continues to gain in concentration of the market cap-weighted S&P 500, passive funds will continue to buy those stocks as well throughout 2023.

This is the beginning of what sets us up for the coming year. Let’s call it the Cornerstone Vision Board for 2023. It has four main parts.

First, the year will begin with continued strength in energy and continued weakness in tech. In energy, there are tailwinds due to the Ukrainian war and the imminent end to the Biden administration's use of petroleum reserves that were artificially suppressing the oil prices. Therefore, prices will likely rise again as demand increases in the spring.

Next, small- and mid-cap stocks will continue to attract “big money” capital because there is value to be found there. This is an indication that the passive investing trend of the past decade is quickly reversing.

Lastly, we envision the back half of this year to see tech resurgence. We think demand will resume for tech stocks, though not to the degree of the past decade. There are many undervalued companies that will see strong earnings return once inflation is fully curbed and recessionary fears evaporate, which will happen at some point.

Overall, in the search for market performance in 2023, our current method remains unchanged from 2022. We want to identify stocks with the strongest fundamentals being accumulated by “big money” investors. We’re seeking companies with strong sales and earnings, along with manageable debt levels.

Admittedly, this is boring on its face. But the strategy served us well in 2022. And as we sit here today, data dictate that it remains the best course of action, at least for the foreseeable future. Ultimately, that's where we will focus for the time being. Call it an effort to repeat the same successes we had in 2022. The fact is, just because the calendar flipped doesn’t mean there’s going to be meaningful change from a sector allocation standpoint.

As readers know, we have not been too bullish on Fed Chair Jerome Powell’s policies going back to 2021. Our support for him has been “transitory” at best.

We’ve been pounding the table that one of the most important metrics in the fight against inflation is the M2 measure of money supply, which is cash, deposit accounts, and non-cash assets that can be quickly converted to cash. This is especially true because the Fed directly controls the trajectory of its own balance sheet.

A surge in M2 can occur because of what the Fed is doing as well as a collapse in M2. That’s happening right now:

Basically, the Fed has now officially choked off the creation of credit in the economy through its policies. Money supply growth has flattened.

For this and other reasons, a pause on the all-out assault on inflation would be wise. It’s time to let the system work. But that’s not happening. The Fed remains hawkish.

Can you see why our support for the central bank’s inflation policies is “transitory” at best? It seems a “soft landing” is only possible if intervention ends now.