The market has been a whirlwind for a while, with volatility the norm as sectors rotate and range-bound trading remains prevalent. A microcosm of the entire year is what’s occurred since December began. Stocks have jumped and retreated in that span, as if a final reminder by the market of this year’s ups and downs in just a couple weeks.

With help from our friends at MAPsignals, we want to focus on the volumes of recent days. It’s not something we often write about in equities analysis, though we probably should more because big volumes move markets. Volumes let us know whether certain up or down days are significant. Analyzing volumes also allows us to view volatility a bit differently.

Here are Nov. 29-Dec. 8 prices and volumes for the Invesco QQQ Trust (QQQ)*, a proxy for the Nasdaq Composite Index:

Above we can see several numbers, but without much to compare them to for perspective, they don’t make a lot of sense. To fix that, we’ll use a common tool in volume analysis – the 25-day moving average. This calculation smooths out data to provide a continually updated average over a 25-day period, lessening the effects of random, outsized fluctuations.

We used the 25-day moving average to find big volume days for QQQ from Nov. 29 to Dec. 8. There was one and it produced an outsized positive return: 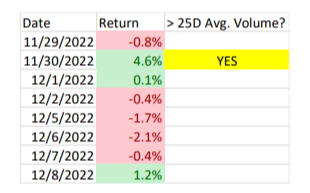 Also notice how most of the lower-volume days produced negative returns. This action is actually desirable because you don’t want to see lower returns on higher volumes. Down days on lower volumes are less concerning. The important point in the above table is that on the day volume was big, it was buying, and it moved QQQ almost 5%. 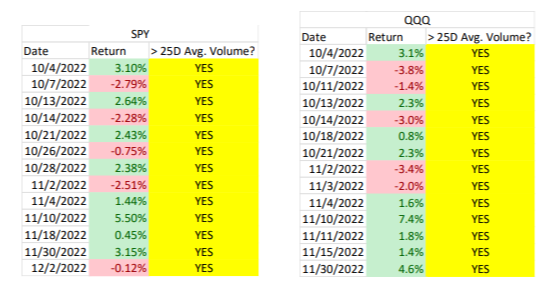 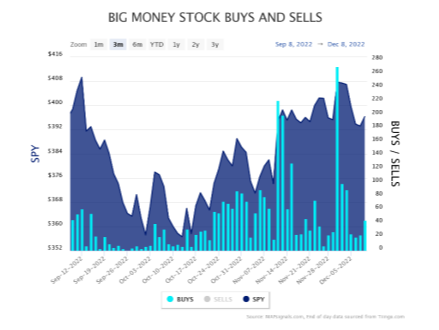 Now that we’ve shifted the view on daily volumes a bit, let’s zoom in to the period of Dec. 5-8, which saw more selling than buying: 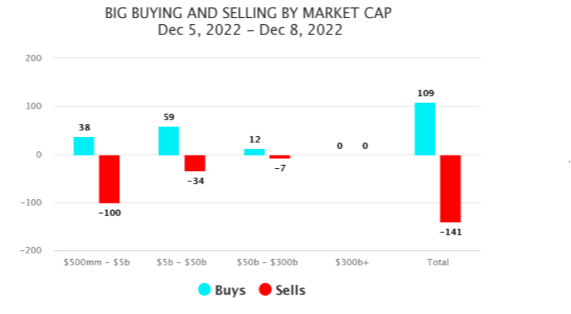 Here is that timeframe in a yellow box on the SPY chart showing “big money” buys: 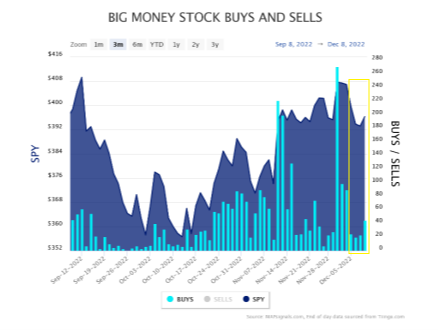 The media narrative on this period would normally be about concern. But let’s remember context – volumes were light. If we include the week prior, making the analysis period from Nov. 28-Dec. 8, we see a clearer picture of markets that includes larger volumes: 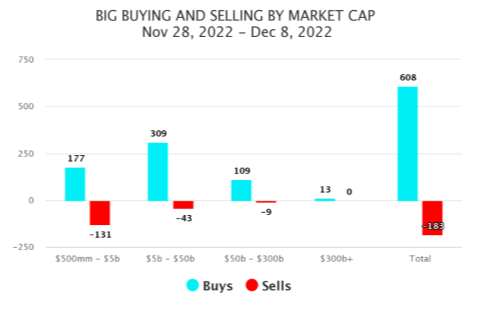 That doesn’t look so bad, does it? There was a lot more buying than selling, especially of smaller size stocks. Here is that expanded timeframe in a yellow box on the SPY chart showing “big money” buys: 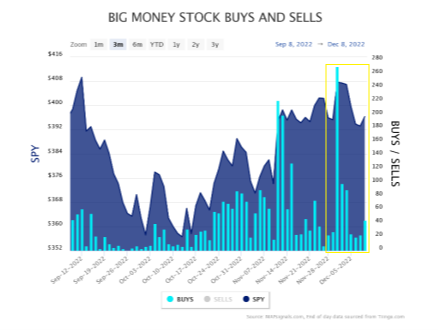 Again, context matters. With limited views of light-volume trading, we can’t see the entire picture. This one example shows how big volumes move markets. Recent upward jumps in stocks have been because of broad buying on a large scale, which in our opinion is healthier than this year’s previous upward movements that were based almost exclusively on energy sector buys and pauses in overall selling.

There still could be pullbacks in the near-term which, to be clear, we do expect. But from a technical standpoint, “big money” buys we’re seeing now are encouraging because they may provide the initial foundation for future longer-term growth.

You may have already seen 2023 market outlooks that aren’t expecting much upside. Sentiment surveys are almost universally revealing downbeat attitudes and projections.

Today we want to suggest a slightly contrarian view. It focuses on data and four main sentiments that support a slightly more positive narrative than what’s largely out there right now when using historical context as a guide.

To many, it seems recession is “imminent.” But nobody knows if one will occur, and if so, how bad it will be. We do know history suggests discussing a recession and worrying about it is worse for stocks than being in one or having lived through it: 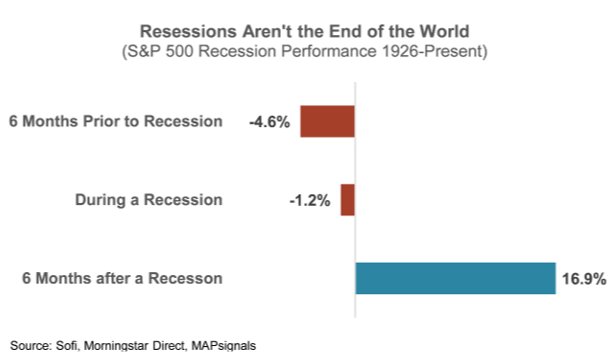 Keep in mind, the S&P 500 already suffered a 27% peak-to-trough drop through mid-October. Historically, that likely means there is more upside potential ahead than downside risk. While recessions aren’t desirable, as the chart shows, life goes on.

The conventional wisdom is that the current inflation is still a reason to sell stocks and recession is all but a done deal. However, if we look at the chart below, we see history suggests that stocks have an average gain of 14.5% in the 12 months following peak inflation: 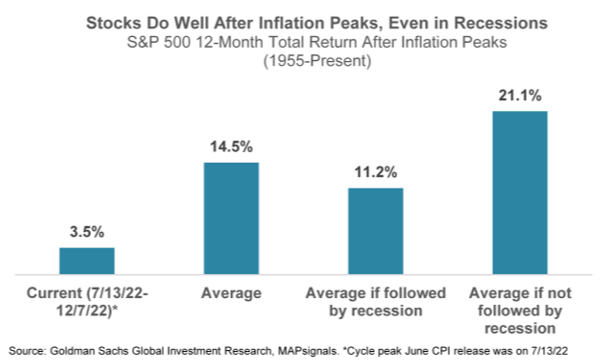 If a recession follows peak inflation, stocks have averaged gains of 11.2%. If not, the average gain is 21.1%. Either way, stocks have done well in this environment since 1955. As of this writing, the S&P 500 is only up 3.5% since inflation peaked in July, suggesting there may be more room to run.

We keep hearing about earnings jitters, but according to FactSet, analysts are projecting modest earnings growth on slightly increased revenues: 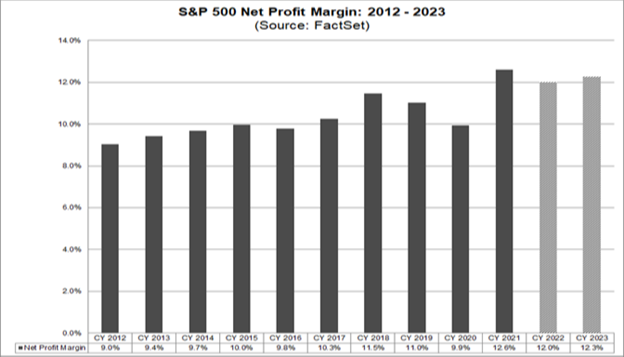 And yet, investors still don’t buy it. If they’re right, it’s probably fine, because since 1963 stocks still advanced after earnings fell: 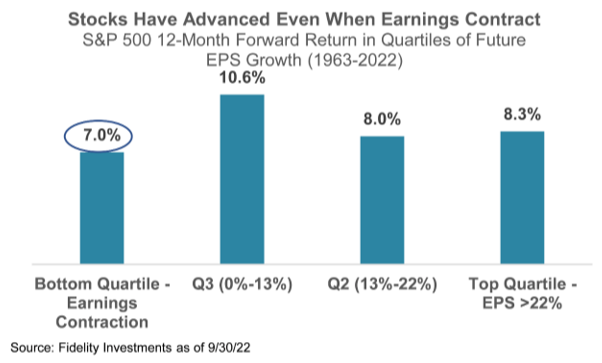 As the other examples we’ve highlighted show, the market is a forward-looking entity, pricing in bad news well ahead of time. Once earnings fall, stocks have already begun to rebound.

Currently, the S&P 500 is trading at 17.1 times it’s 12-month forward earnings, down from 21.5 a year ago. There’s a narrative this price-to-earnings ratio needs to contract significantly more. But unless 2023 is an epic economic downturn – and the points above do not suggest that outcome – the multiple probably will not decrease substantially.

Even in the worst-case scenario of an ugly recession and slashes to profit forecasts, falling earnings usually lead to rising valuations: 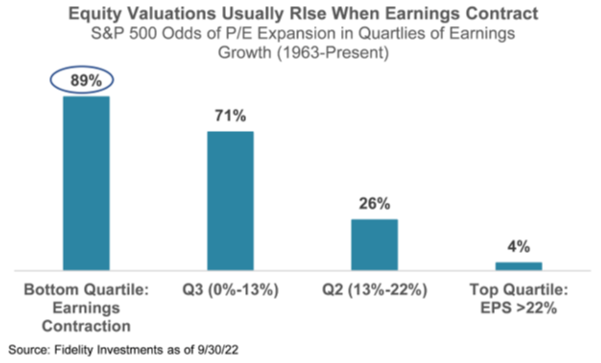 That’s because stocks have already priced in the bad news – again, markets are forward-looking. By mid-2023, markets will be looking to 2024 and beyond.

We’ll have more on 2023 in the weeks to come. For now, please understand how the four points above show the importance of data. Some of the information above is counterintuitive, but it’s what actually occurred over history. We become better investors when our contextual grip strengthens.

Right now, there’s a lot of uncertainty, including about what will happen next year. This is when fear and worry can dominate the proceedings. Instead, rely on data. While it may not be hard to find causes for worry, also realize there are many positive indicators out there too.

On that note, we’d like to wish everyone a Merry Christmas and happy holiday season!

Investing involves risk and investors may incur a profit or a loss.  Any information should not be deemed a recommendation to buy, hold or sell any security.