*In this final post of 2022, we want to wrap up some of the biggest stories of the year. Here are seven charts that we think encapsulate 2022, then one that points a way forward for markets next year. Without further ado, let’s get to the charts.

Russia invaded Ukraine in February, immediately forcing Ukrainian refugees to flee to Europe (mainly Poland, Romania, Hungary, and Slovakia) and the rest of the world. Every day for almost the first week of the invasion, more than 100,000 Ukrainians fled their home country, with more than 1.2 million leaving in eight days: 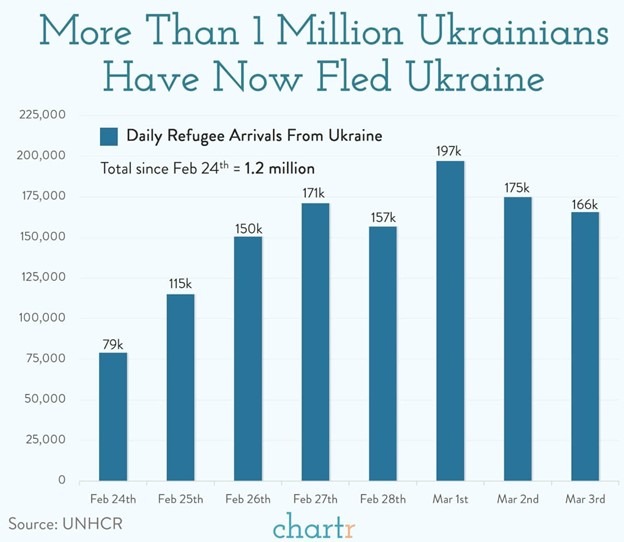 At that time, the United Nations High Commissioner for Refugees estimated that up to 4 million people might flee Ukraine, which would be about 10% of the population. According to statista.com, as of this writing 7.8 million Ukrainian refugees have fled just to Europe alone (almost double the U.N. estimate).

Inflation at the Gas Pump

Going into this year, inflation was already top of mind. By January, gas was topping inflation tables, with prices at the pump up nearly 50% in a year. And then Russia invaded Ukraine. Given Russia's place among the top suppliers of oil globally, sanctions were expected to hurt its economy badly: 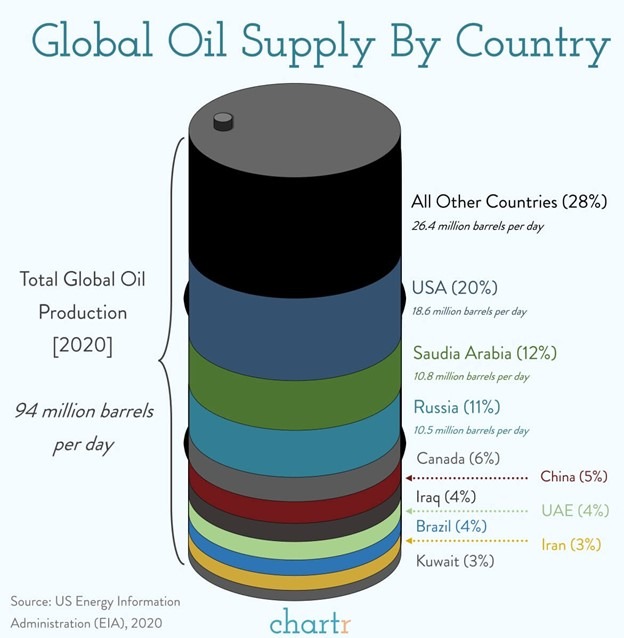 But the issue was (and still is) Europe's reliance on Russian gas and oil. It accounts for more than 40% of the European Union’s gas imports. And it took until early December to implement a $60-per-barrel price cap on Russian oil. During the year the U.S. government brought down our own strategic petroleum reserve its lowest levels since 1984 in a failed attempt to alleviate some of the pain at the pump.

As energy inflation was exported around the world, the word “transitory” left policymaker speeches almost as quickly as it arrived. In the U.S., the Federal Reserve acted at an unprecedented pace, hiking rates to show “strong resolve” in taming double-digit inflation: 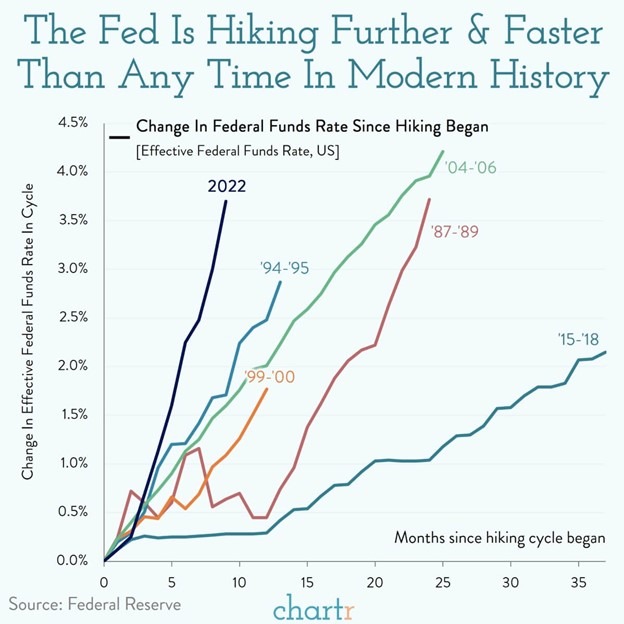 The hikes have ripped through almost every aspect of the economy. We’ve seen the strengthening of the U.S. dollar, some of the sharpest mortgage rate rises in decades, and the humbling of the stock market. 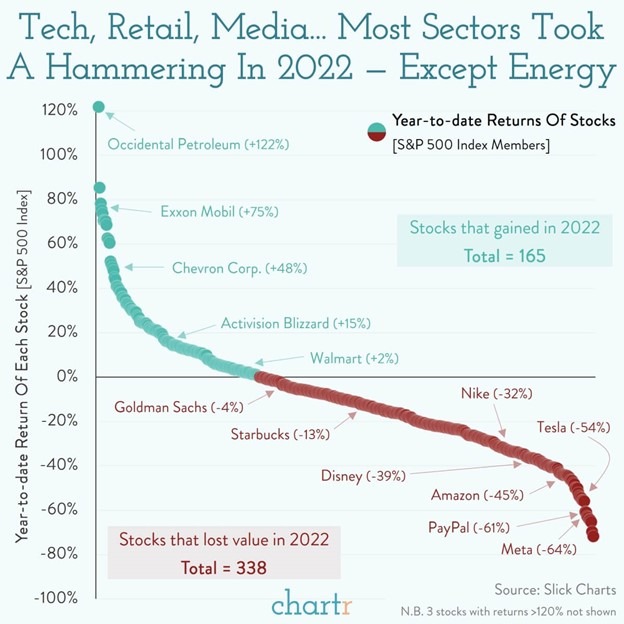 The technology and media sectors had a reckoning. For example, PayPal Holdings, Inc. (PYPL) and Tesla, Inc. (TSLA) both lost more than 50% in value. Countless others, including Amazon.com, Inc. (AMZN), Alphabet Inc. (GOOG, Google’s parent company), and The Walt Disney Company (DIS) shed more than a third of their respective market caps.

China’s 20th Communist Party Congress kicked off in October with President Xi Jinping consolidating his power (even having a former leader removed). There has been unprecedented public protest and economic stagnation, marking arguably the most uncertain time of Xi’s leadership: 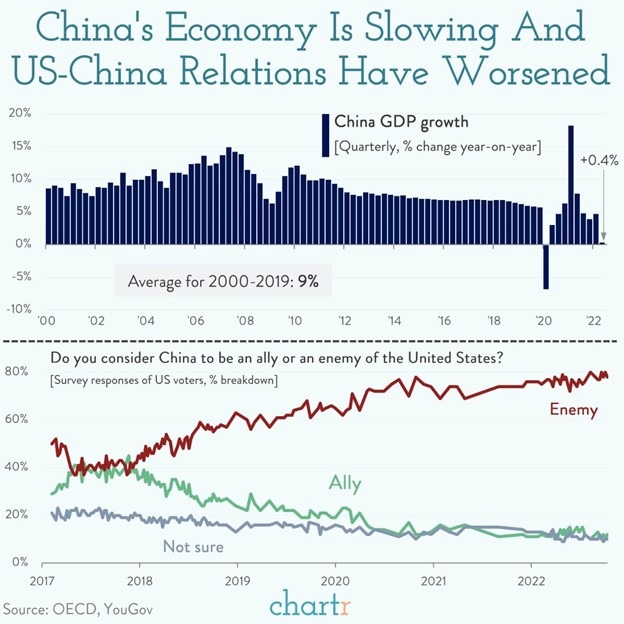 The country’s economy began to precipitously slow as President Xi focused more on national security and geopolitics. In his speech at the National Congress, President Xi even offered bleak future insight into China's already strained relations with the U.S. (see above on how many Americans now view China as an enemy).

The Ups and Downs of Social Media 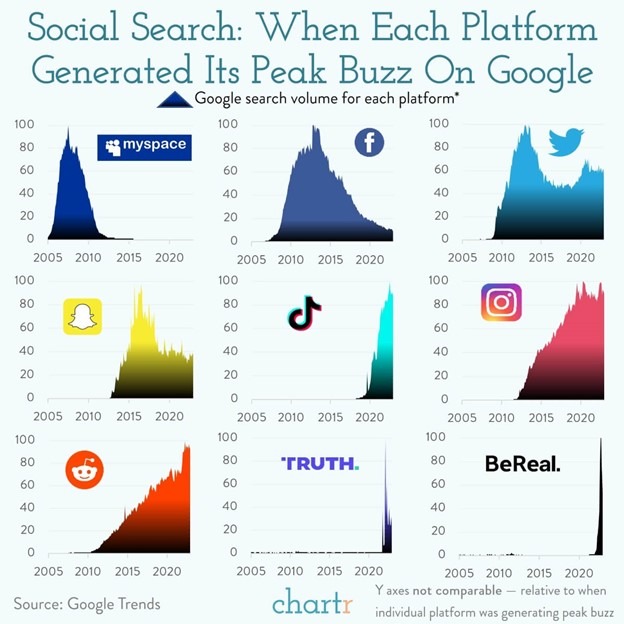 The industry is fickle. We all love to hate it. But one thing is certain – social media is a vibrant ecosystem, and even more so now with Musk involved.

As illustrated above, people devote more and more time to social media and short-form content on smaller screens, making such devices preferrable to “the big screen” in the battle for attention. Unsurprisingly, the box office business has stumbled. However, there were some standout success stories this year. Horror and Marvel still triumph. But the real star of the show this year has been sequels: 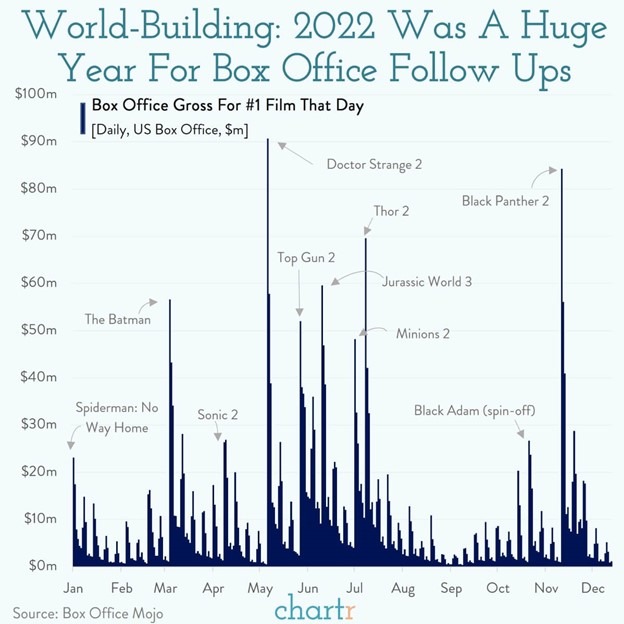 Hollywood’s yearslong franchise-building effort is paying off. Each of the ten highest grossing opening days this year so far have been secured by sequels, spinoffs, or reboots. “Top Gun: Maverick” is soaring (at least until Avatar 2 numbers come in), having led the way at Memorial Day and Labor Day – a feat never accomplished in the past.

It wouldn’t be a CFS blog post without something from FactSet! So, to close out this post and this year, we want to show a forward-looking chart for stocks. As 2022 ends, where are stock analysts most optimistic and pessimistic in terms of their ratings? Here’s a look (but remember how (in)accurate analysts tend to be!): 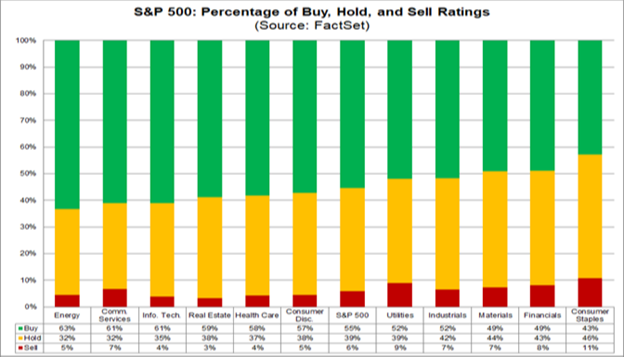 In the meantime, as our readers know, CFS strongly believes in the power of data and charts when it comes to storytelling. But we recognize, especially at this time of year as family is together, that charts and data are weakest when discussing human stories like the flight of Ukrainian refugees from war-torn areas. In those cases, we give credit to the wider journalistic world for telling these important stories. Thank you.

Hopefully 2023 brings you and yours plenty of good fortune. We at CFS wish everyone a Happy New Year!