We’ve mentioned before how typically the end of a year and the beginning of the next can bring light investor action and data, which makes prognosticating tougher. Well, we’re now far along enough in 2023 to have accumulated sufficient data to lay the groundwork for what’s ahead.

As everyone knows, markets were volatile in 2022. While it may feel similar recently, the early trends in 2023 are changing under the surface relative to last year. You may think I’m a bit silly, but the recent data reflecting a shifting undercurrent – and it’s bullish. In a far cry from 2022, the S&P 500 was up more than 4.0% year-to-date less than two weeks ago.

Here’s the bottom line: as of this writing, we're seeing increased buying and decreased selling uniformly across the market. From a macro perspective, let’s start with the Big Money Index (BMI), which is a 25-day moving average of “big money” investor activity, from our friends at MAPsignals. It ended 2022 on a big slide after nearly reaching overbought territory (red arrow below). However, recent buying action has re-established an upward trend (green arrow): 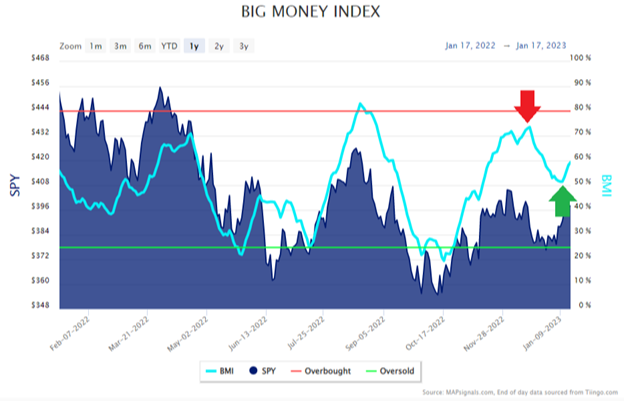 This upward swing is due to buying intensifying and selling basically disappearing. It’s occurred in stocks: 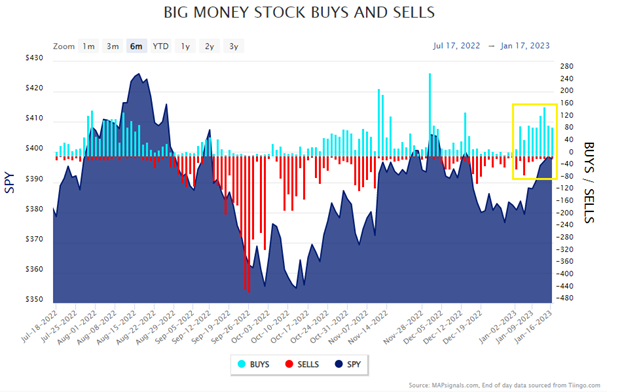 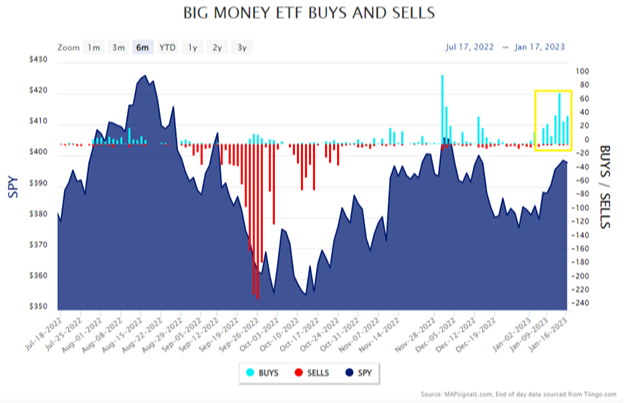 Now, buying at the macro level doesn’t always equate to balanced buying. Still, you can see in MAPsignals’ sector rankings that buying isn’t focused on a sector or two like last year, but is on display throughout all sectors:

The point can be hammered home with another visual aid from MAPsignals showing how buying has been spread across the market, which hasn’t occurred in some time: 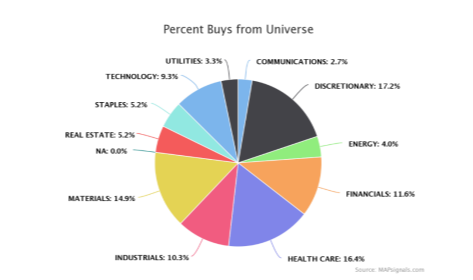 We now understand where the action has been on a sector basis (i.e., everywhere), but what about market capitalization? “Big money” investors are focusing on small- and mid-cap stocks, which historically is a bullish sign at the beginning of an upward trend: 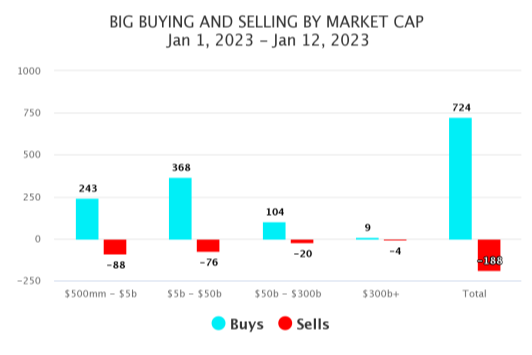 Granted, this could just be an early-year bump and may not mean much over time. But it may also be the start of the long term bullish thesis, albeit we still expect choppiness throughout Q1 of 2023.

Thankfully our friends at MAPsignals were also curious and did the heavy lifting for us. They looked at days where buying and selling increased over multi-day periods. For example, if there were 100 buys one day and 120 the next, that’s an increasing buying day. 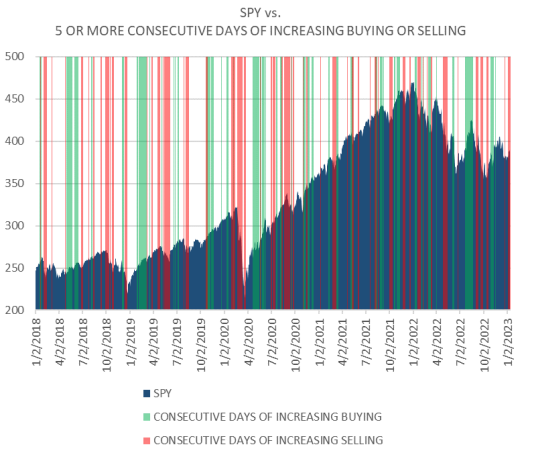 Through Jan. 12, we were in one of these consecutive increasing buying patterns. This swelling movement coincided with the market rallying on the latest inflation data.

What about employment though? There have been some big layoffs announced recently, especially at technology firms.

When you eliminate the headline noise and look at data in a clinical manner, the current picture is encouraging. But what’s supporting these changes in the underlying data?

We’ve identified six primary spots of focus to understand how market data has changed. They span different areas. However, these forces are working together to move markets.

Based on the big increases in the consumer price index (CPI), Social Security beneficiaries will receive an 8.7% COLA increase this year. Considering the CPI peaked in June 2022, this is a big net positive in terms of cash flow to retirees as prices continue to fall.

Prices continue to drop. Last week we heard how the CPI declined 0.1% month-over-month in December 2022. Notice the slope of the decrease since June 2022 – it is roughly the same as the pace of price hikes we’ve experienced for nearly two years: 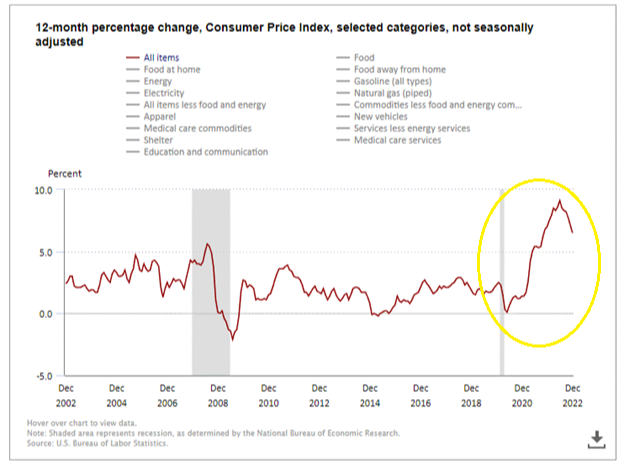 In 2022, one of the biggest headwinds was the strength of our dollar. It’s now weakening (see chart below), which is a boon to multinational corporations that should show up during earnings season starting in Q2. A strong dollar was a major headwind on the foreign exchange market in 2022. But its continuing weakness is a solid tailwind moving forward. 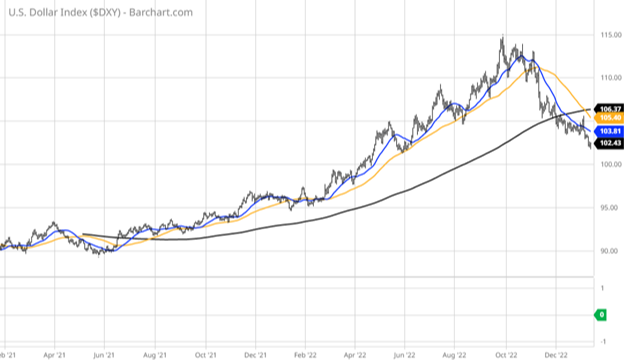 Early Signs of a Housing Resiliency

The housing market hit a wall last year due to rising interest rates. Now the market for available homes remains undersupplied as mortgage rates hit 20-year highs. Per MarketWatch, current estimates are that the nation’s total housing shortage is somewhere between 1 million and 5 million homes.

That said, we have a much clearer picture of where mortgage rates should land. Rates skyrocketed to more than 7.0% after the Federal Reserve’s actions. We think rates will normalize around 5.5% by late 2023, based on our data. That should support a housing market reboot in the second half of this year.

Margin debt peaked at more than $1 trillion in December 2021. But with margin rates now up considerably, investors are likely to use this debt for short-term trading purposes, as opposed to long-term buying and holding, which was a popular play when interest rates were minimal. That popular play created a margin bubble that needed to pop in the second quarter of last year, and it was. 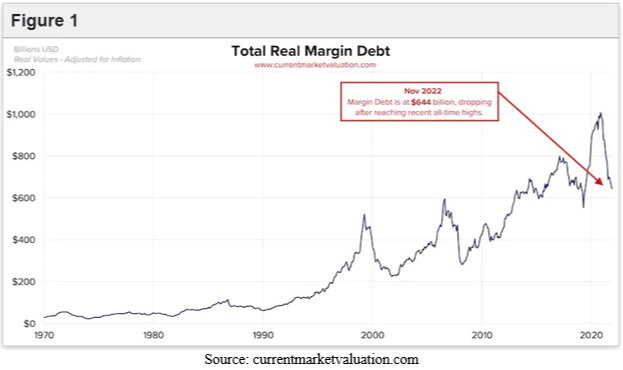 Recent price improvements in the U.S. bond market, especially high yield bonds, are a welcome sight. It’s said bonds trade out of fear and stocks trade out of greed. High yield bonds have rallied this year and are piercing an overhead technical level (see chart below), as of this writing. That reflects less fear of serious economic risks. 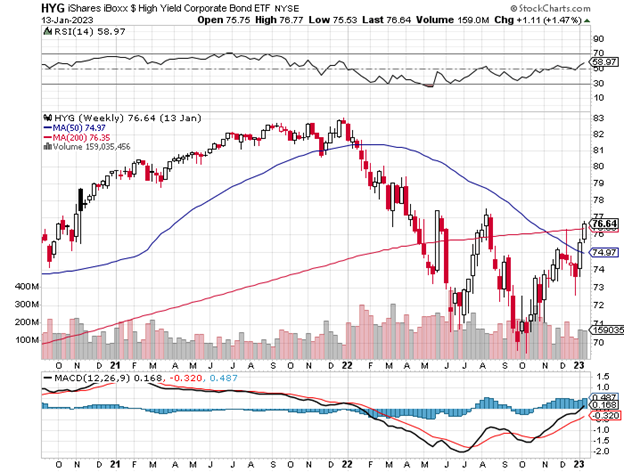 High yield bonds are often considered a “fear gauge” for investors. The increased appetite for these assets would indicate unrest is decreasing. That’s also reflected in the way overall bond pricing is recovering to par value this year: 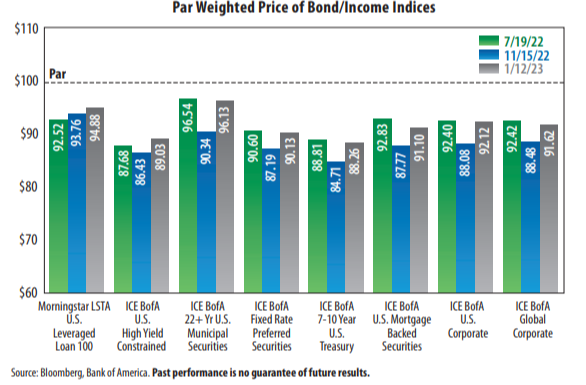 So, the bond market seems to believe we’re on a stronger footing than the popular narratives would indicate. Inflation, mortgage rates, and margin debt are decreasing, as is the strength of the dollar. These are encouraging signs, but we’re not out of the woods yet.

Still, the current situation could be the formation of a new base to build off. The bulls aren’t running yet, but the stage may be being set. In other words, market recovery may be underway soon.