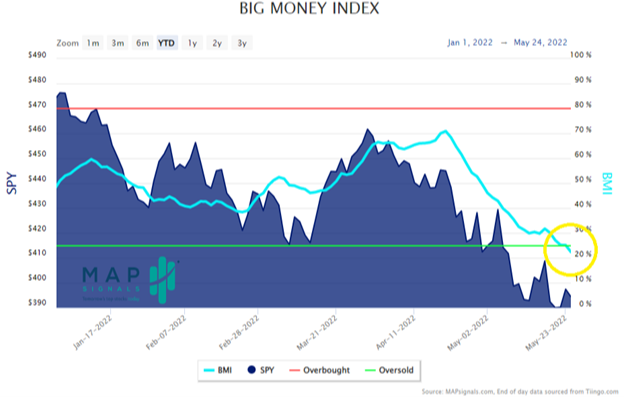 This final downward dip to broach oversold territory was driven by fear within the retail sector. Earnings last week brought about future performance worries, especially at Target and Walmart.

But as a reminder, now that we've reached oversold, here are three things that characterize these market conditions:

We haven’t hit an “all clear” signal by any means. That said, oversold conditions technically showcase very rare, extreme selling that often leads to strong rebounds in the market.

We’ve reached this point because a storm has ripped through economies and markets this year. However, human irrationality is partly to blame too. Fear can lead to hasty decision-making.

And you know it’s elevated when legendary investor Warren Buffett is buying. He’s famous for buying at or near the bottom; his patience is unmatched. Knowing that, do you want to be selling when one of the greatest investors ever is buying? More on that later.

But that’s not as bad as in the recent past, like this table from January 2022:

A look at the current state of risk assets may cause queasiness. With growth valuations sliding so low, investors may think we’re turning on tech as a society. But keep in mind, two original Nintendo Entertainment Systems have as much computing power as the guidance computer on NASA’s Apollo moon mission, according to research from tech community Experts Exchange. And it’s only increasing.

To put all this into perspective, understand that sentiment isn’t all that’s hammering markets. We mentioned recently that we were starting to see margin calls affecting the market too. Our friends at MAPsignals helped us with some research digging into this a little bit further. The results are that margin debt has been a major cause of the recent market destruction.

In this first charts below, you can see prior periods of market pressure and the relationship between margin debt and stock prices:

We start with this chart because we’ve heard a lot of talk about what’s happening now being like the dot-com bubble in the late 1990s. But the spectacular fall of the dot-com bubble was based on insane valuations. There were no earnings. The use of leverage pumped markets up, but there was no “substance” there. It was based on speculation as the fundamentals didn’t back up the valuations. So, even though it hurt, that bubble needed to pop.

For another comparison, let’s examine the global financial crisis that took place from 2007-09. Wall Street’s need for yield led to risky home loans being packaged into “safe” investment products that were then sold to investors who didn’t know what they were really buying. Once again, the fundamentals didn’t support the asset class, but margin debt drove up prices anyway…until the bubble popped:

So, what about today?

While volatility is high and values are sliding, we don’t think today’s markets compare to either of those previous instances or even what happened during the initial outbreak of COVID-19. Company valuations have fallen to extremely attractive levels. That's because this correction doesn't have many stocks with infinite valuations, nor does it have risky, failing loans packaged as “conservative investments.”

But what we do currently have that's similar is a need to unwind leverage. Margin balances had reached nosebleed levels because the government gave away free money and offered to lend at effectively 0% interest rates. Recently we've now seen the unwinding of this margin, forcing stocks lower:

To summarize, today’s equity markets don't have the same fundamental issues as the dot-com crash or the 2007-09 financial crisis. But similarly, we are experiencing the same cyclical margin rotation and subsequent market dips.

Once margin calls and leverage reductions conclude, which should coincide with an oversold BMI, the market will find a floor. Absent sellers, the value buyers will step in.

Per the table below from MAPsignals, once we find the floor, the average forward returns look good:

Based on this detailed historical data from MAPsignals, we think the trough could come around June 1, 2022.

Now circling back to Warren Buffett, we think that it is prudent to notice that he is currently on a big buying spree. Remember that he doesn't buy at market tops, only at bottoms.

A couple other silver linings are developing too.

First, the second quarter outlook for gross domestic product (GDP) output is now at 2.4%, according to the Federal Reserve Bank of Atlanta: 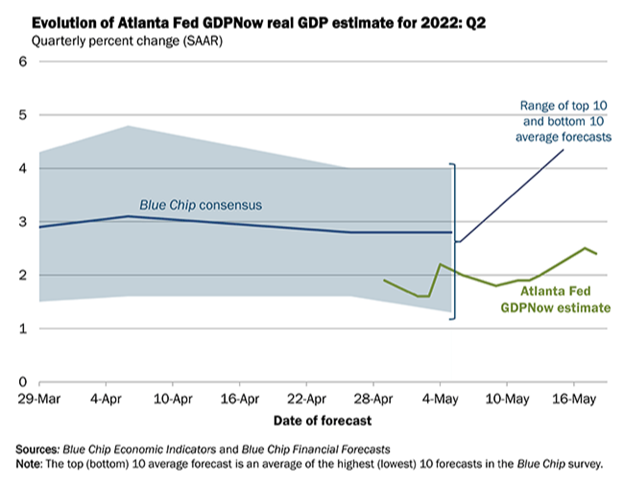 That’s a far cry from the -1.9% reading at the opening of the quarter. We believe this is a result of companies maximizing technologies to sustain profit margins as best as possible.

Next up is the Bank of America Bull & Bear Indicator. The theory behind this datapoint is that when bearishness gets too extreme, it's bullish for stocks in the short term. It says to buy right now: 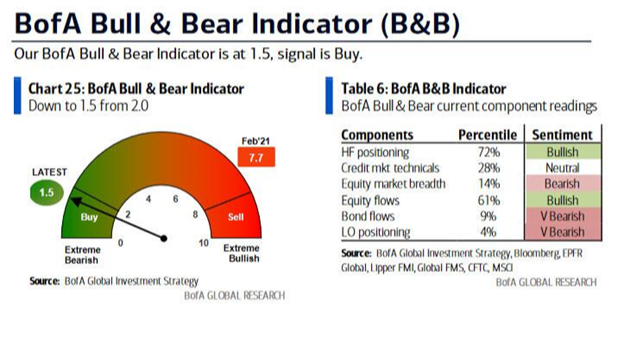 All told, the BMI is oversold, margin debt is unwinding, Buffett is buying, GDP expectations are on the rise, and contrarian indicators are flashing.

So, while we believe the market breadth will remain narrow and don't expect a full bull market to resume until there's clarity on the economy, we’re beginning to see optimistic signs. From a longer-term perspective, once it is clear that we have either avoided or weathered a recession, money will likely pour back into growth stocks as rates will probably have stabilized by then as well.

We still believe the Federal Reserve will only raise interest rates to pre-COVID levels (in the mid 2's) because “Fed speak” has already caused asset prices to fall, which in turn caused deleveraging in the form of margin calls. The Fed has begun to accomplish its goal without actually raising rates too much. This is, in essence, is “ghost tightening.”

The Fed is forcing down a necessary nail without using a hammer. As for the margin calls, it’s like these investors are kids and their parents cut their allowance. They’re now adjusting to that new reality.

Yes, this is difficult to experience. But again, if some key datapoints are favorable and the greatest investor of all time is buying right now, do you want to be the one selling to him?