Markets react. It’s what they do. However, those reactions aren’t always rational. And in today’s world of algorithmic, high-speed trading, irrationality can be automated. We think recent market reactions have been recently reached the point of outlandish, and we’ll explore that throughout this post.

One example of chaos is this statistic on “big money” institutional investors from our friends at MAPsignals – there were just 81 “big money” buys last week compared to an enormous 1,125 sells (below). A significant portion of the selling was in smaller companies, which are often “lower quality” in terms of earnings and other financial metrics. In many cases, these firms are not yet profitable. 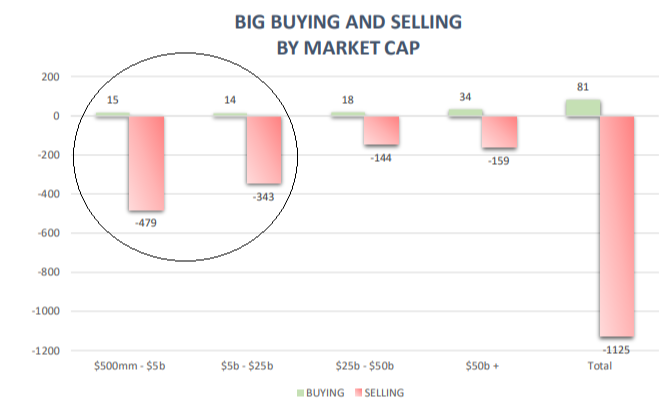 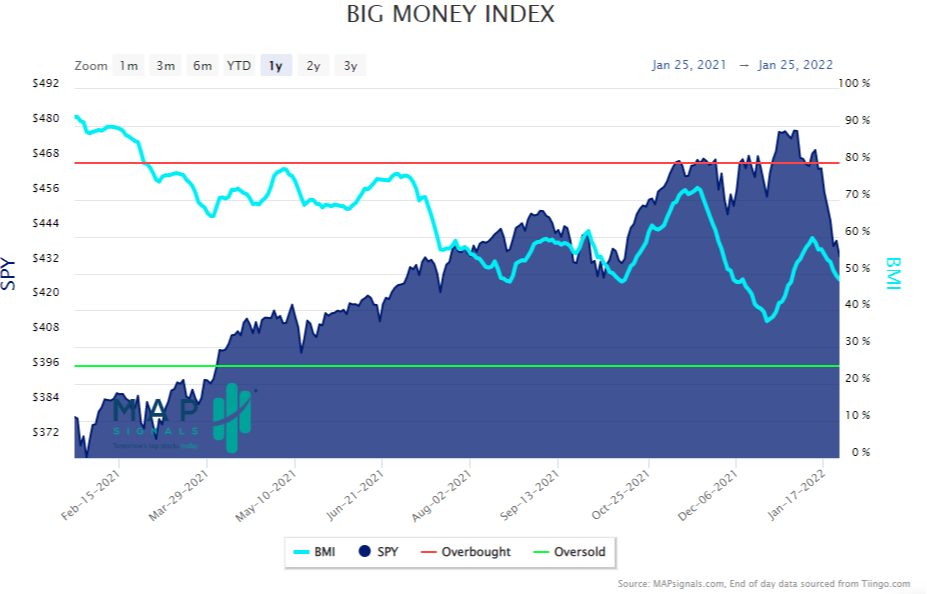 This brings the BMI to about where it started the year. Given what’s occurred so far, we at Cornerstone are viewing the recent slide as a market reset where the lesser quality assets are being shed swiftly.

Keep in mind, more of that could continue in the future. However, with earnings season ramping up in force and history on our side, the selling trend could subside over the intermediate term. Also don’t forget big intra-year drawdowns are common, rational or not.

Before we get into the heart of this post, to highlight some of the irrationality of the market recently, you can see that selling has taken over in MAPsignals’ sector rankings – there’s nowhere to hide other than energy:

One last nugget of irrationality is this: only last Monday we saw the NASDAQ down -4% intraday before it ended up +1%. That’s a net 5% intraday move, which to us screams high frequency and algorithmic computer trading. Such extremes are irrational, as is some of the reasoning behind it, so we have hope there is light at the end of the tunnel sooner rather than later. As you can see, silly things can sour fast as everything seems like it's coming unglued. Looking at the chart below of the major indexes, you can see red everywhere:

But you can also see a clear distinction between quality and the more speculative. The tech-heavy NASDAQ’s losses were almost twice as great as those of the Dow Jones Industrial Average, which is full of established, cash flowing and dividend paying companies.

There may be a silver lining in all this, though.

While we acknowledge that things are ugly right now, remember this selloff is an intensified continuation of what began back in mid-November. Back then, selling was focused on tech and health care, then spread to growth stocks generally. Now almost the entire market is under selling pressure.

What do we mean by that? Looking at the tables below, the pressure points are clear. Growth and small caps are feeling the biggest pain. Discretionary, tech, communications, and publicly traded real estate are weak sectors. Energy is a positive outlier. Also notice how value has held up relatively well: 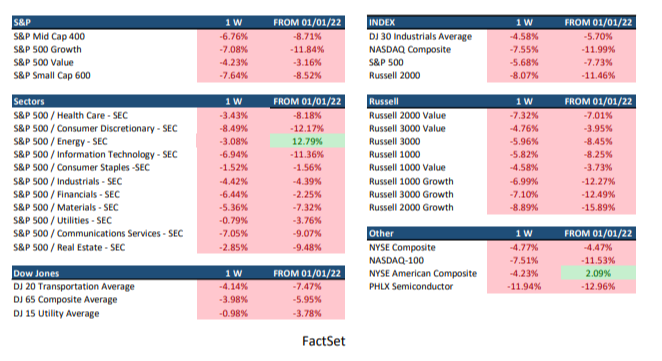 But as readers of this blog know, we’ve been saying this divergence between value and growth was inevitable when the fear of rising interest rates was priced into the market, which would bring us back to a “norm” where fundamentals and quality matter more than Reddit and meme stocks. Again, this is clearly exemplified in the ratios between value sectors and growth sectors where growth and non-profitable companies are getting hit significantly harder.

From a more macro view, this is the most selling since the pandemic arrived in February and March 2020. In the below one-month charts, the red bars of “big money” sells in stocks and exchange traded funds (ETFs) look similar to the extremes we saw in early 2020. 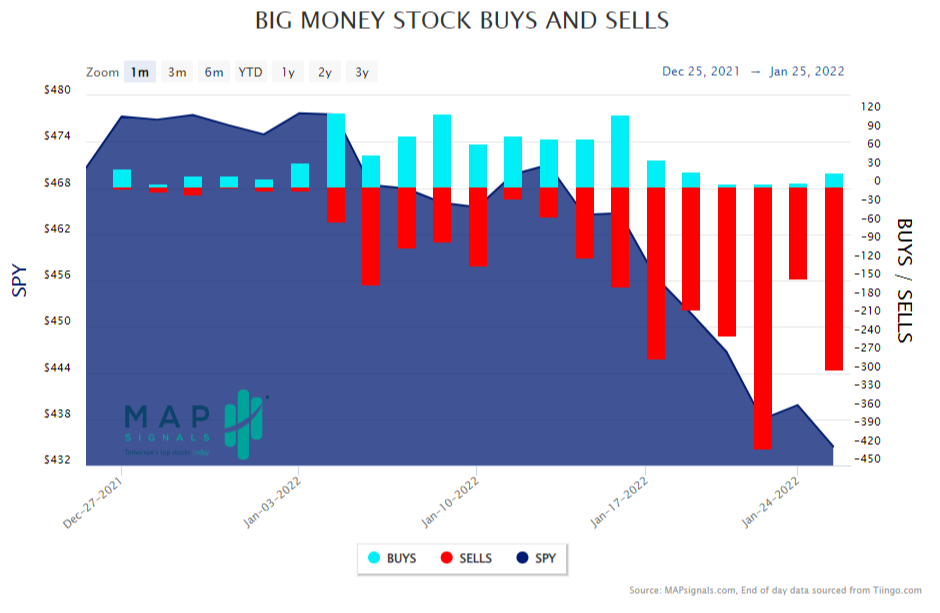 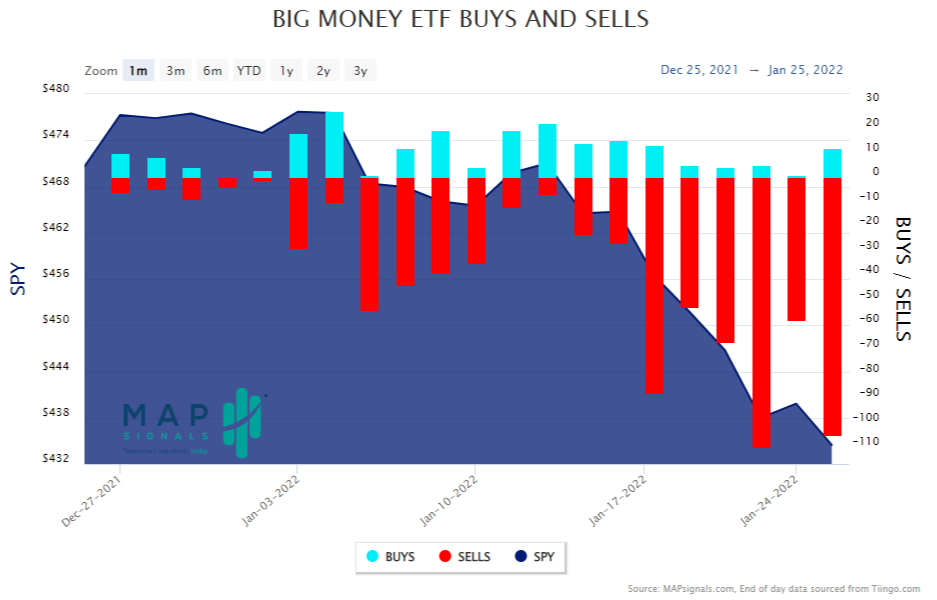 Now the question becomes, is this extreme selling rational in nature, like it was in March 2020 due to the unknown, or more irrational as we refocus on fundamentals like earnings and revenue?

In our opinion, the news driving this selling is not even close to the fear associated with the pandemic back in March 2020, and we think the deep-red nature of the market is an immense overreaction. It's almost like we're dealing with another taper tantrum. Here’s why:

This price dip almost seems by design. The Fed must fight inflation because assets are too expensive. Forcing stocks to decline lowers asset prices. We all know stocks can tumble on hawkish language, which the Fed has used recently. And here we are – the bid for stocks stopped because no one really knows what will happen. The entire scenario is a recipe for irrational downward momentum and intraday volatility…just like we saw last Monday.

But let’s be rational. Earnings are starting to come out, and they still look to be good. All our channel checks are pointing to continued solid earnings with no sudden negative revisions. That should help stabilize the market.

This is especially true with profitable technology companies, particularly software firms. Every company either has to buy a product from one, become one, or get left behind. So again, it’s proving to be lucrative to own high-quality, free cash flow generating stocks during this correction.

Going forward, we believe the opportunity in equities will occur in two phases:

Before you think we’re out of minds, consider how last week we saw a slew of blowout earnings from companies like those described above. They include Johnson & Johnson, Procter & Gamble, IBM, Apple, Microsoft, United Health, Verizon, Travelers, American Express, 3M, Texas Instruments, Morgan Stanley, Lockheed Martin, and PepsiCo.

Each is a household name. Why? They’re the best of the best and they dominate their industries.

This all gives more credence to the dividend growth stock thesis we’ve been discussing for a while. That is, holding quality, profitable companies that pay growing dividends is a great way to battle inflation. Each of the profitable, growing companies named above pays a dividend.

Going forward, we believe they’ll flourish even more for a few reasons. One is the fading of the omicron variant of COVID-19, which will help people get back to work. Another is the easing of supply chains, which should drive prices down with supply increases. Yet another reason is we think the Fed will raise rates two or three times this year, not four like Goldman Sachs predicted and the market seems to have priced in already.

Should all that occur, we will likely get out of this intact, despite ample fears of our demise.

Who knows if we’ll be correct? There’s always the possibility of a Black Swan. But if data and history are any guide, we know that patience is the prudent course of action in times of volatility like this, even if there’s some suffering along the way.

Our friends at MAPsignals did the historical legwork for us, highlighting similar weeks of epic selling dating back to October 2014: 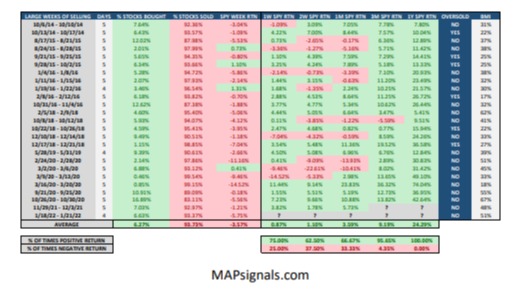 What's the takeaway? Stocks have historically risen after weeks of big selling. In most cases, the rise starts within a week and keeps going.

Knowing that, let’s turn to Sherpa-like investor Warren Buffett for guidance in volatile markets. He said it all with this: “Be fearful when others are greedy, and greedy when others are fearful.”