Policy Shift Negates Inflation Fix, Yet There is Hope

Many of our readers will think we’re beating a dead horse talking about the Federal Reserve, interest rates, inflation, markets, the economy, and so on. But we still hear neighing – the horse is still very much alive – so we need to discuss the Fed again.

The value of money should be sacrosanct. The U.S. government has a responsibility to keep it stable, which in theory is what it’s trying to do now. The problem is, 14 years ago the Fed changed the way it manages the value of money when it shifted monetary policies from a “scarce reserve” model to an “abundant reserve” model (technical details of this topic can be found in this Fed paper).

While we don’t like getting too technical in this blog, it's necessary to lay the groundwork for what's going on today. We believe there’s a direct connection between the policy shift 14 years ago and the current high inflation.

Therefore, the federal funds rate is effectively 0.0%, no matter what it actually is, because only in a very special situation would banks ever need to borrow these reserves. So, the Fed created an interest rate that it pays on these excess reserves to banks for not taking them (called interest on excess reserves or IOER).

In other words, under the old system the market was involved in setting interest rates. Today, the Fed artificially sets them. And once again, this is all new as of 14 years ago.

Now we’re finding out that, while raising interest rates may reduce economic growth and throw the U.S. into a recession, there's no guarantee it will fix inflation because the amount of money circulating in the economy (the M2 money supply) is what determines inflation. At the end of 2007, the Fed’s balance sheet was $850 billion. Today it's close to $9 trillion. And if we add excess reserves to “reverse repos,” it shows more than $5 trillion in excess money in the system.

That, folks, is inflation. And there are many, including us, that think the “spirit of Volcker” (i.e., raising interest rates) will not control inflation like it did in the 1980s.

The big question is whether the Fed can pay banks enough to stop them from lending. We've never tried to stop bank lending in an inflationary environment. What interest rate is enough? No one knows.

If the Fed raises interest rates to 4.0% under this new method of managing monetary policy, it will pay private bank entities $200 billion per year. Additionally, the Fed would be losing money in its bond portfolio because it bought so many bonds at low interest rates during the pandemic and would be paying out more in interest than it’s earning on its own assets.

So, there’s an experiment going on right now. While history is often illustrative, it’s not in this case because we’re kind of in uncharted waters. Raising interest rates in a “scarce reserve” model worked. We don’t know if it will in an “abundant reserve” model.

What does all this mean for the average person?

Well, because of this uncertainty, there’s been an increase in fear for many. That’s led to a significant drop in MAPsignals’ trusty Big Money Index (BMI), which tracks “big money” investor buy and sell activity, just as it looked like stocks were ready to lift off: 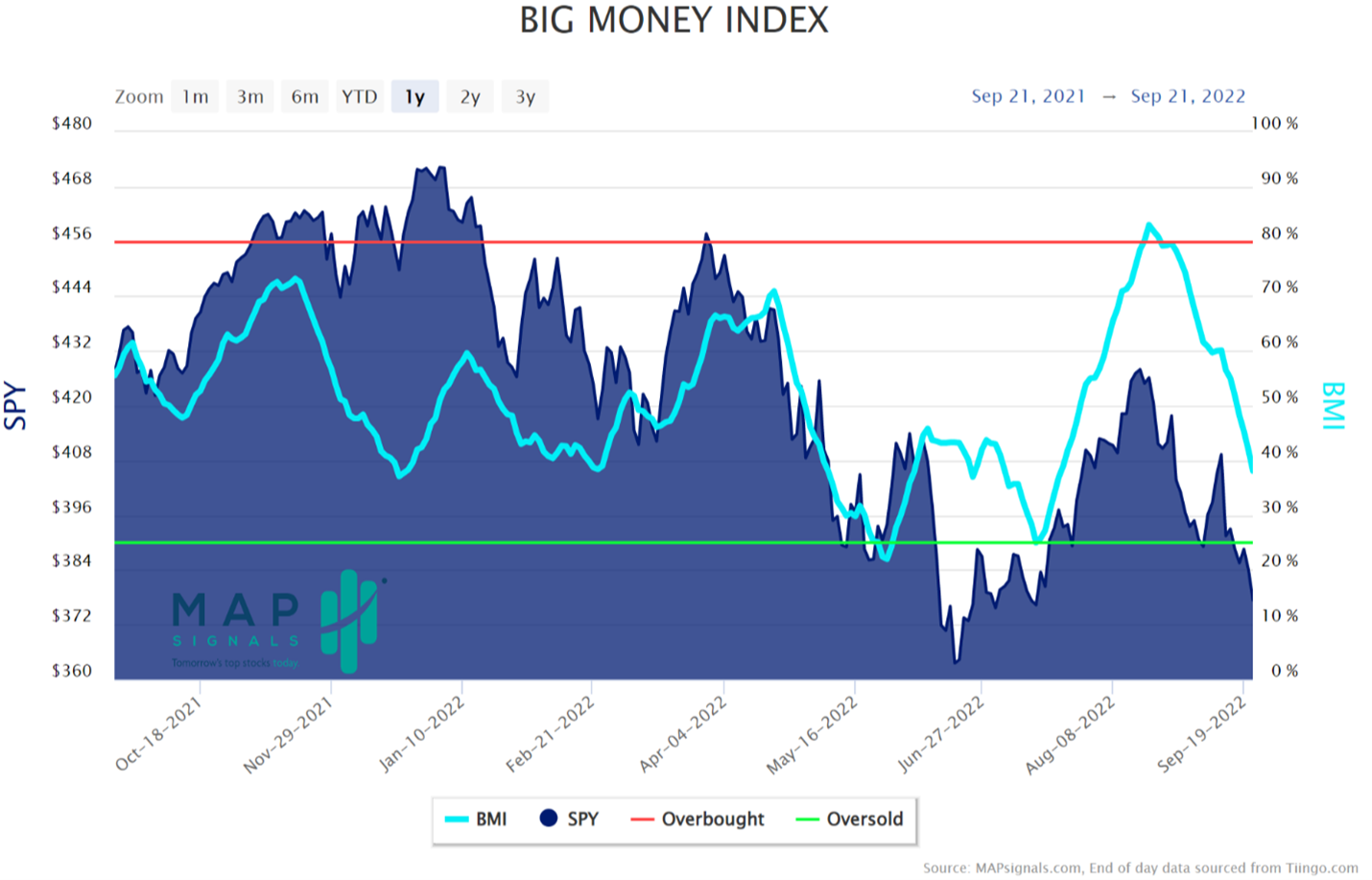 This is a great example of how markets can cut deep in times of fear and uncertainty. And remember, it all started with an unfavorable August Consumer Price Index (CPI) report. After that, the selling picked up: 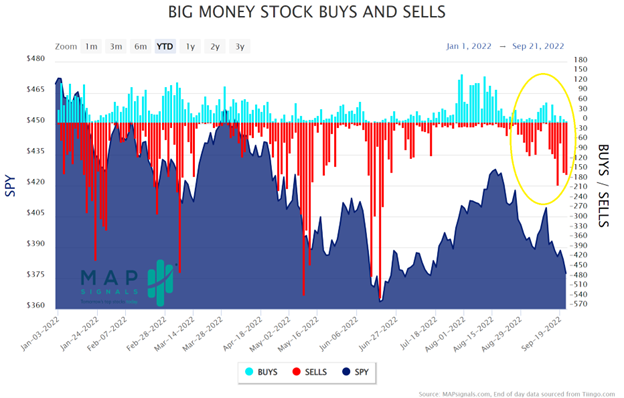 When reviewing MAPsignals’ sector rankings, it’s clear how uncertainty is trickling through almost every sector. In fact, during that week, nearly 77% of all “big money” signals were sells:

Obviously, this fear in the market not only coincided with typical September volatility, but also with the poor CPI report. Prices basically rose for everything: 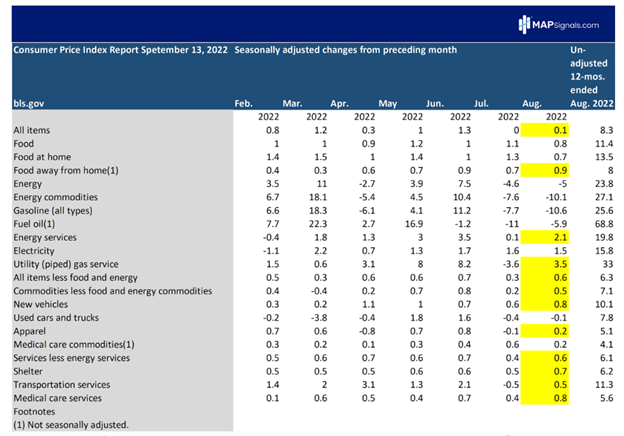 All these factors compound to have big effects on average Americans’ everyday lives.

We all hear that when the cost of capital increases, many businesses feel the heat. But households are no different. At the end of the day, companies and households both run on the same lifeblood – cash in and cash out.

Home ownership provides one good lens to show how Americans are feeling the pressure. As you can see in the below chart, the 30-year mortgage rate fell from about 5.0% in 2010 to around 3.0% just last year. That opened homeownership up to many people. But the mortgage rate has rocketed to nearly 6.5% since then, the highest reading in more than a decade, and has doubled since December 2021 alone:

The magnitude of this increase is incredible. Our friends at MAPsignals did the heavy lifting for us – thank you! The below table shows mortgage payments for a 30-year conventional mortgage of $360,000 (the loan required to finance a $450,000 home after a 20.0% down payment) with interest rates ranging from 2.0-15.0%. Clearly even a 1.0% jump can have profound impact on homeowner finances:

Only a few percentage points on the loan create a massive cost compounding effect over three decades. This relates to the stock market in that these higher costs mean less discretionary spending in this tighter market environment. That also means less money to invest generally and less money to invest in the companies that are in the stock market, putting pressure on their future revenue and earnings potential.

But there is light at the end of the tunnel.

Everything mentioned above is an accounting of the worst-case concerns that have bubbled up to the collective consciousness in the last few weeks. We also need to keep in mind how September is historically a terrible month for markets. That’s certainly held true in 2022. Thankfully, on average we’re finished with the worst part:

But as we’ve pointed out before, midterm election years have provided strong ends of the year historically, with October and November delivering average returns of 2.5% and 2.4%, respectively:

Yes, we’re facing real problems. The fear is rational. But if history is a guide (and it’s still useful in many respects), there's still an opportunity for a fourth quarter lift.

Even though the unexpected CPI report threw a wrench in the machine, we must remember that we have to endure the bad news to come out stronger on the other side. There's still time this year for the economic data, especially the inflation data, to begin to moderate our collective fears.

Once that happens, that’s when we’ll see markets cooking with nitro gas.

Investors want clarity right now as much as anything. Once there’s an inkling of clarity as it relates to tamping down inflation, markets should take off. That is the true light at the end of the tunnel. However, we may need to endure more short-term pain in the meantime.